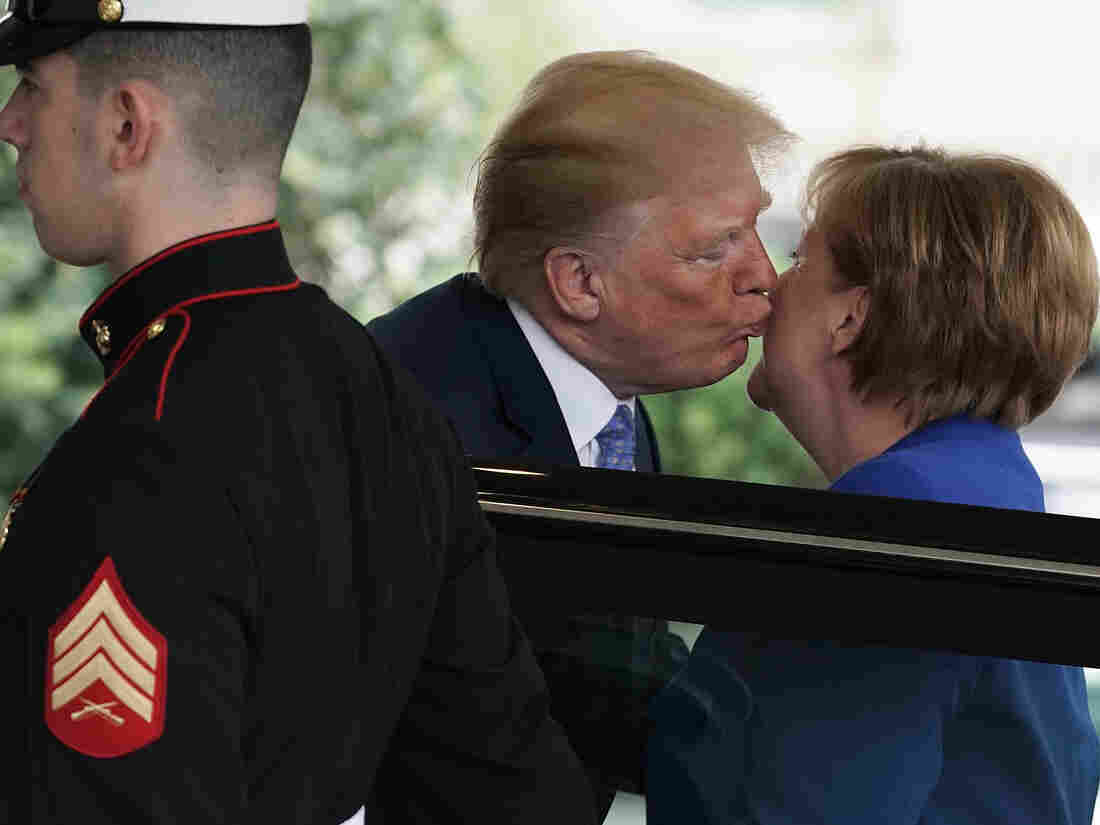 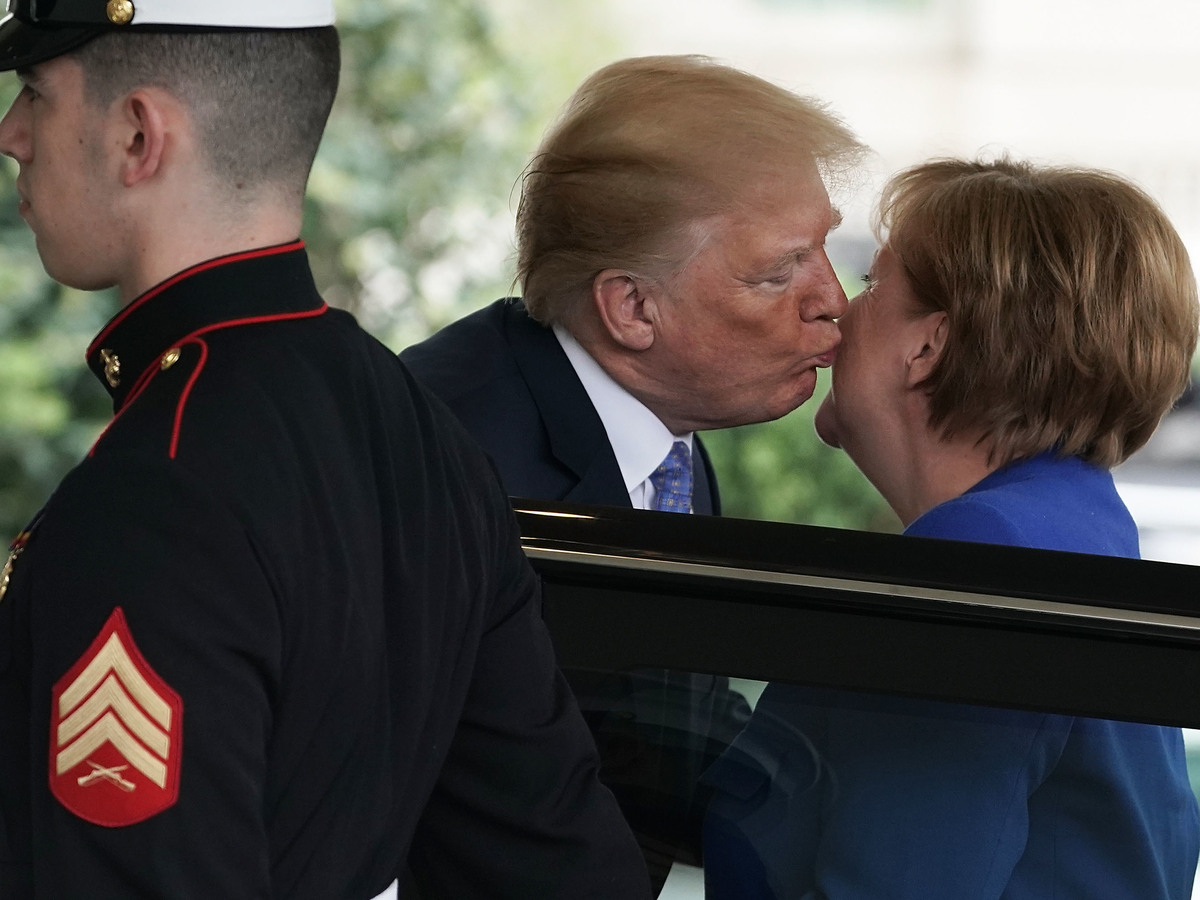 President Trump kisses German Chancellor Angela Merkel during her arrival at the White House on Friday.

For Germans, Friday’s working session between President Trump and Chancellor Angela Merkel at the White House proved unexpectedly cordial and, at times, odd.

The chancellor, who is usually reserved, looked surprised when Donald Trump greeted her with a kiss on each cheek, a move the president seemed to have picked up from the French during the first state visit by France’s president, Emmanuel Macron, earlier this week.

It is not, however, a German tradition, and the pecks drew a flurry of German commentary, including from the daily tabloid giant Bild, which referred in a video to the intimate greeting as the “first surprise” of the Trump-Merkel meeting.

Other surprises followed, including Trump repeatedly shaking Merkel’s hand. (Their first meeting is best remembered for its lack of handshakes.) The president also gushed over the chancellor winning a fourth term. 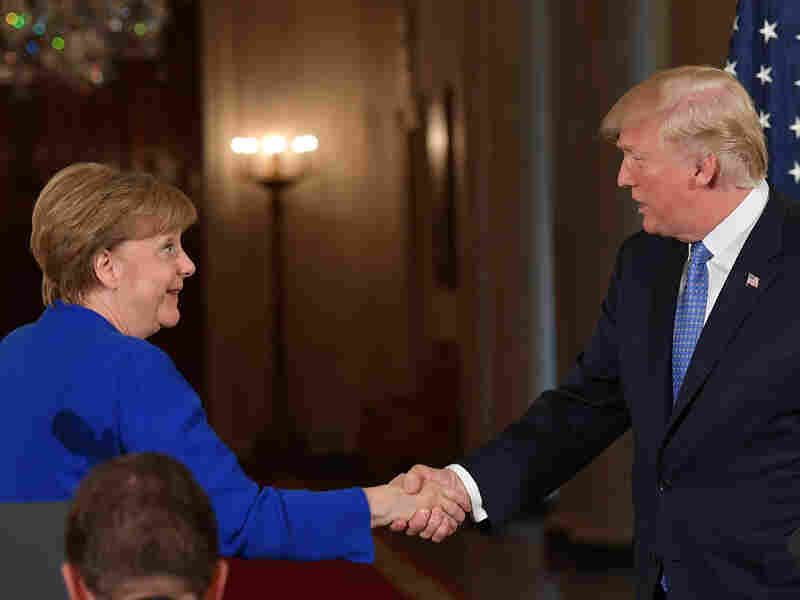 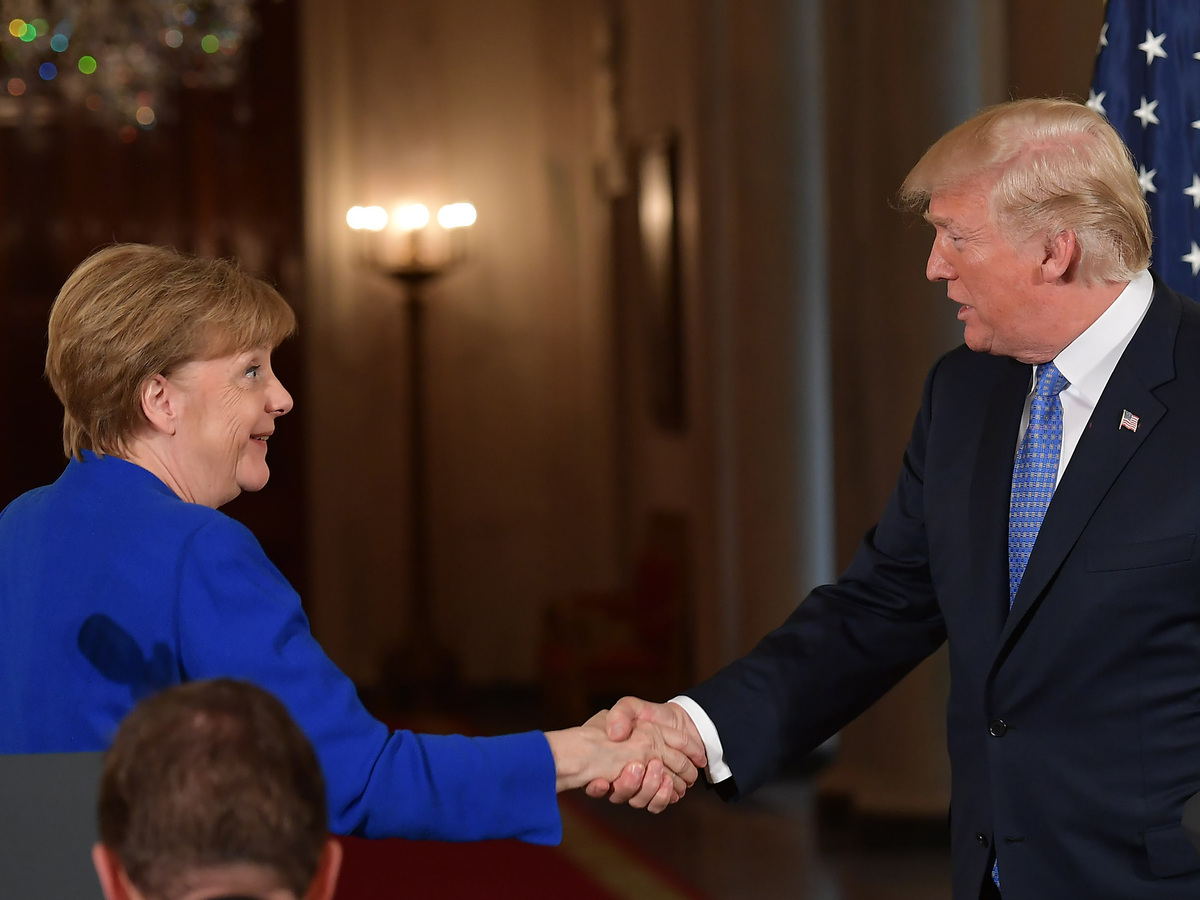 President Trump and German Chancellor Angela Merkel shake hands after a joint press conference at the White House on Friday.

He even appeared to adopt Merkel’s trademark posture – known in Germany as the “raute” – by pressing his fingertips into a diamond shape.

The intense German scrutiny of such optics may seem superficial, but it is not surprising, given that the two-hour talk between Trump and Merkel failed to produce tangible results. Not that the chancellor, her government or the German public had really expected any.

Even senior German officials who briefed reporters on Thursday as Merkel traveled to Washington said they expected U.S. tariffs on European steel and aluminum imports to take effect May 1 as scheduled.

“The entire visit for Merkel — even more than for Macron — was about damage control,” said Olaf Boehnke, Berlin-based senior adviser to the Copenhagen consultancy firm, Rasmussen Global. He added that he couldn’t “see Merkel really sacrificing any positions that would bring her trouble at home.”

According to a new poll by YouGov for the German news agency, DPA, 39 percent of Germans think their government should criticize Trump’s policies more.

Months of trans-Atlantic conversation and European pleas and threats have failed to change Trump’s belief that the EU and Germany — the bloc’s economic powerhouse — treat the U.S. unfairly when it comes to trade and leave Washington footing the bill for NATO.

Senior German officials said Merkel’s goal during Friday’s meeting was to try to connect with him. Her talking points included German investments in the U.S. being more than double than those of the U.S. in Germany: $328.9 billion vs. $136.4 billion, the officials said.

Merkel also spoke about German carmakers exporting 480,000 cars from their plants in the U.S. to the rest of the world, providing jobs and income for Americans.

The German presentation didn’t appear to move the U.S. president, however, and in his joint news conference with Merkel, he again demanded a “fair and reciprocal trading relationship.”

Nor were Merkel and Macron able to extract a guarantee from Trump that he won’t pull out of the Iran nuclear deal on May 12. That prospect is especially worrying to the EU given lucrative business deals European firms have made with Iran since the sanctions were lifted.

In a nod to the White House position, Merkel said she supports the idea of additional measures to curb Iran’s ballistic missiles program and its regional activities and referred to the nuclear deal — formally called the Joint Comprehensive Plan of Action — as a “building block.”

Germany’s planned increase of $18 billion in defense spending over the next three years also failed to impress Trump, even though it was a difficult concession that Merkel and her Christian Democratic Union party had wrested from their governing partner, the Social Democrats, during coalition talks earlier this year.

At Friday’s news conference, Trump repeated his demand that all NATO partners , including Germany, contribute at least 2 percent of their GDP to defense spending. Given the German economy is booming, the percentage of its budget spent on defense has slipped to under 1.2 percent.

Merkel struggled to maintain her usual, poker-faced demeanor during the meandering news conference. At times while Trump spoke, she smirked or looked bewildered. But many German analysts nevertheless declared the encounter a success.

“A lot of the key issues are still open, but it’s not the full-blown disaster that some people feared,” explained Constanze Stelzenmueller, a senior fellow at the Brookings Institution.

It also showed Merkel’s “ability to keep her cool in what seems like a really losing situation and come back with something where she’s actually regained ground — or so it seems — in terms of a relationship that looked bad and unsalvageable,” she said. “And she made it clear that she can manage to find a rapport with Trump. That’s more than many of us expected.”

Deutsche Welle correspondent Michael Knigge added in a Friday opinion piece: “That Merkel and Trump pulled off such a cordial meeting despite their previous bruising encounters in person and via Twitter makes their brief get-together arguably even more significant than the state visit by Macron, who simply clicks better with Trump on a personal level.”

“To be clear, no one knows whether the mellowed stance exhibited by the U.S. leader toward Merkel and Germany will soon be swept away by a presidential tweetstorm,” Knigge wrote. “But a solid, or at least a decent, working relationship between the chancellor and the president is clearly in Berlin’s, Washington’s and Brussels’ interest. So let’s enjoy it while it lasts.”