Atletico Madrid defender Lucas Hernandez has revealed his excitement towards his future with the club after having signed a new contract with Los Rojiblancos which will keep at the Wanda Metropolitano until 2024.

Hernandez, 22, has spent his entire career at the club, working his way up from the youth academy to Atletico’s B side before finally settling in the first team. In the 2017/18 La Liga season, he featured 27 times, bagging one assist.

Hernandez discussed his situation with Marca, confessing: “Atletico Madrid are the club of my life, they’ve given me everything and I’m very happy with my renewal because it was what I wanted most.

“They’ve always trusted me, since I came into the youth team and gambled on me, I’m very grateful. “For me it’s an honour to have been part of our academy and have made it to the first team, with the club gambling on me like that.

“I can’t do anything else than thank them for their trust and pay them back on the pitch.”

When asked about Atletico’s plans for next season, Lucas said: “The club has grown so much in the past few years. “We have a very important project, I’m very excited about what we’re preparing for next season.

“They are making a big effort for Atletico Madrid to keep growing and it’s something that excites all of us players.”

“I want to thank our fans, for me they’re the best in the world.

“They continuously support on the pitch and on social media, they’re always with us through the good and bad. It’s something we should always be thankful for because it’s very important for us.”

As well as securing the long term future of Lucas, Atletico Madrid have tied down Uruguayan World Cup hero Jose Gimenez to a new contract and signed Monaco winger Thomas Lemar, whilst Antoine Griezmann also finally revealed he will stay with Atletico, putting rumours of a move to Barcelona to an end. 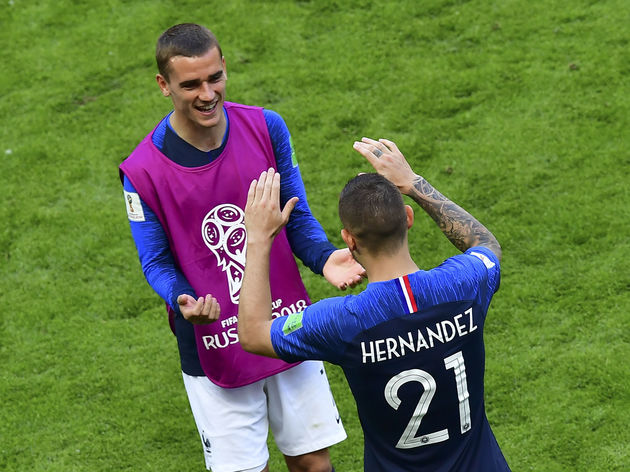 Lucas, who is the brother of Real Madrid full back Theo Hernandez, is currently at the World Cup with France. He started their opening game against Australia, and will be hoping to keep his starting position as his country meet Peru and Denmark in the final games of Group C.