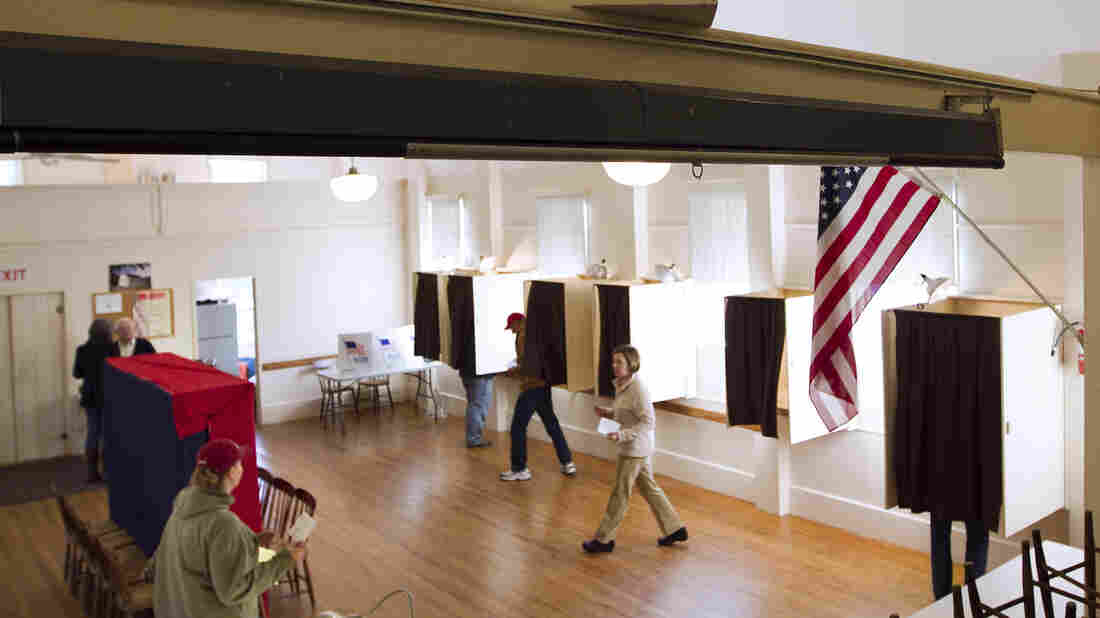 In this 2012 photo, a stuffed loon overlooks voters in the Old Town Hall on Westport Island, Maine. Ranked-choice voting will be put to its biggest test when Maine uses the system in a statewide primary election on Tuesday. Robert F. Bukaty/AP hide caption 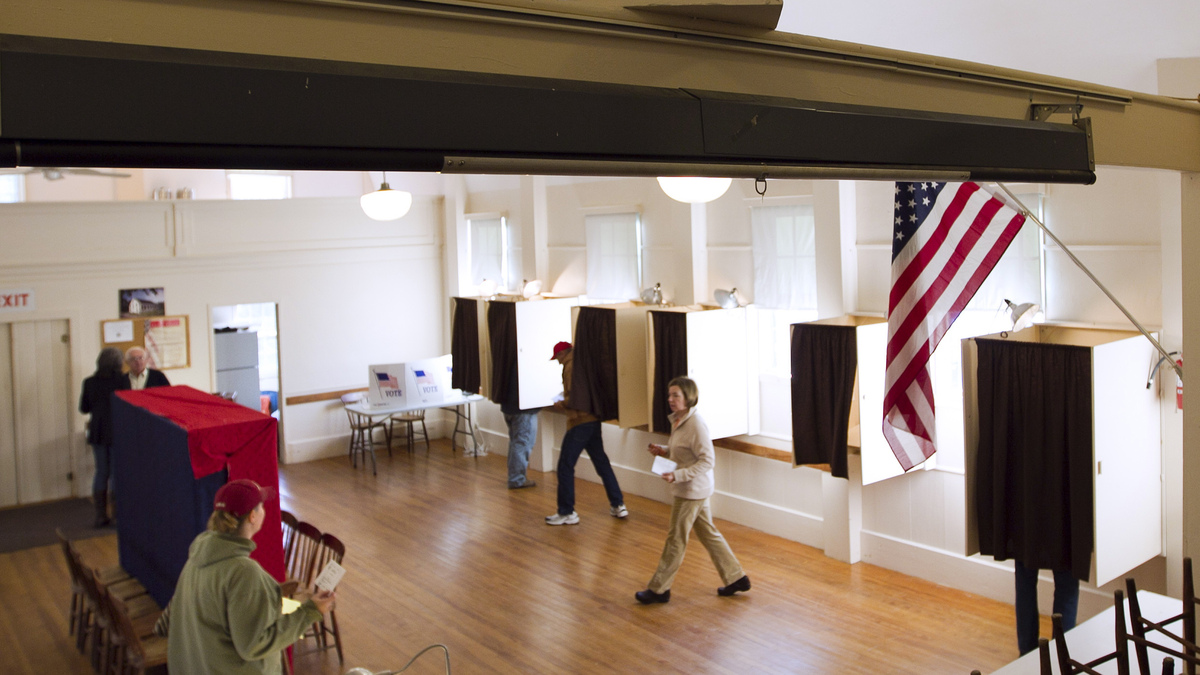 In this 2012 photo, a stuffed loon overlooks voters in the Old Town Hall on Westport Island, Maine. Ranked-choice voting will be put to its biggest test when Maine uses the system in a statewide primary election on Tuesday.

Tuesday’s primaries provide one of the clearest tests yet of how much GOP primary voters are willing to tolerate a candidate who has criticized President Trump.

Last week’s Alabama primary saw one GOP incumbent forced into a runoff because of her opposition to the president, and that could happen again in South Carolina where Rep. Mark Sanford is up for reelection. There are also battles of Trump loyalty in the GOP races for governor of South Carolina and congressional contests today in Nevada.

Democratic women could emerge as their party’s standardbearer in several more congressional contests critical to their party’s hopes of retaking the House as well. And there are also some contests that highlight the liberal vs. moderate divides that have roiled some Democratic primary races this year as well.

Plus, we’ll see the first state adopt a voting system where voters rank their choices.

Here’s a rundown of what to watch Tuesday’s contests in Maine, Nevada, North Dakota, South Carolina and Virginia:

Races to be the most ‘Trumpian’

The incumbent most in danger of losing renomination on Tuesday is South Carolina Rep. Mark Sanford, all because of his vocal criticism of the president.

The Republican proved his ability to survive a major scandal — famously disappearing from the state in 2009 when he was governor, claiming to have been “hiking the Appalachian Trail,” when in fact he was carrying on an extramarital affair in Argentina. He was censured by South Carolina’s legislature, but Sanford served out his term and won a special election to the House in 2013.

But now Sanford faces a vigorous and well-funded primary challenge from state Rep. Katie Arrington, who argues she would be a better team player for the president than Sanford has been. If neither candidate in the three-way race tops 50 percent, there will be a runoff in two weeks.

The South Carolina race for governor also features a Trump loyalist, Gov. Henry McMaster, trying to fight back several primary challengers in a race that’s all but assured to go to a runoff. McMaster got the job after Trump chose then-Gov. Nikki Haley to be UN Ambassador, and he was the first statewide elected official to endorse Trump early on in the primary. Trump repaid that loyalty over the weekend with a tweet lavishing praise on McMaster.

Henry McMaster loves the people of South Carolina and was with me from the beginning. He is strong on Crime and Borders, great for our Military and our Vets. He is doing a fantastic job as your Governor, and has my full endorsement, a special guy. Vote on Tuesday!

That may not still be enough to save him, though. Catherine Templeton, a former member of Haley’s cabinet, had become the incumbent governor’s chief antagonist, but wealthy mortgage company executive and Iraq War veteran John Warren, who’s largely self-funding his campaign, has been surging in the final stretch and could claim the runoff spot instead.

In Virginia, the GOP Senate primary has also been a race to the right — and it may cost Republicans any hope of unseating incumbent Democratic Sen. Tim Kaine. Corey Stewart, who nearly claimed the nomination for governor last year and has attracted controversy for his defense of Confederate statues, is probably the front-runner — much to the chagrin of national Republicans. Also running is Pastor E.W. Jackson, who was the 2013 GOP nominee for lieutenant governor and has warned that practicing yoga can lead to Satan. Most establishment Republicans have lined up behind state Del. Nick Freitas, who has the support of groups aligned with libertarian champions like the Koch brothers and Kentucky Sen. Rand Paul.

The bitter Senate primary contest underscores just how much the GOP in Virginia has fallen in recent years, failing to win a statewide contest since 2009. The commonwealth has gotten bluer, but the GOP has only moved farther to the right there.

A state that avoided a bitter intraparty fight is Nevada, where Danny Tarkanian had been angling to challenge onetime Trump foe, GOP Sen. Dean Heller. Heller is considered the most endangered Republican incumbent this year, as the only GOP senator running for reelection in a state that Hillary Clinton won in 2016.

The White House convinced Tarkanian, a frequent candidate and son of a famed basketball coach in the state, to run for an open House contest instead. Now, Heller is easily expected to win his primary, where he will likely face Rep. Jacky Rosen, who’s expected to claim the Democratic nomination. Their race will be one of the most competitive of the 2018 cycle.

Tarkanian will soon find out whether his decision to run in the 3rd Congressional District will pay off. A different candidate could be more competitive in this swing seat, given Tarkanian’s losing track record and more conservative credentials.

Democratic women are vying for the chance to flip two competitive Republican congressional districts in Virginia. More than half the women who have run in Democratic House primaries have won this year, according to Rutgers University’s Center for American Women and Politics.

GOP Rep. Barbara Comstock, who represents the D.C. suburbs and exurbs, is one of the most vulnerable incumbents in the country, representing a district that Trump lost by 10 points. Six Democrats are vying for the nomination, but state Sen. Jennifer Wexton is seen as the front-runner and has lined up endorsements of many of the state’s Democratic officials, including Gov. Ralph Northam.

Anti-human trafficking activist Alison Friedman, who has been able to fund much of her own campaign, has attacked Wexton over her record on gun control since she supported a compromise between former Democratic Gov. Terry McAuliffe and the National Rifle Association. Meanwhile, Army veteran Dan Helmer attracted attention with an ad comparing Trump to Osama bin Laden, which drew the rebuke of the White House.

The contest to challenge GOP Rep. Dave Brat — in the increasingly competitive 7th district in the Richmond suburbs — is between former CIA operative Abigail Spanberger and retired Marine Dan Ward. In an interview with the Washington Post, Ward even complained that Spanberger has gotten more favorable treatment because she’s running in the “year of the woman.”

“She’s had the red carpet laid out for her in the national media… And gender is really the only reason why,” Ward said, noting he has to be careful not to come off like a “raging misogynistic jerk” even though he often wants to fight back.

The Democratic Party has seen some intraparty fights this year between liberals and moderates, and that’s happening again in the race for Nevada governor. Clark County Commissioner Steve Sisolak is running as a centrist, along with the backing of former Senate Leader Harry Reid’s considerable political machine, while his fellow commissioner Chris Giunchigliani is presenting herself as the liberal alternative. As the New York Times recently pointed out, women running for governor haven’t gotten the same boost as female federal candidates this year.

Maine Attorney General Janet Mills could help break that trend in her state’s governor’s race, but the outcome may not be clear immediately. The state is trying ranked voting for the first time — but voters are also being asked whether they want to keep that system in place for the future too. Mills is one of several Democrats running in the open seat contest, a key pickup opportunity for Democrats. Most of the Republicans are all running in the mold of firebrand conservative GOP Gov. Paul LePage, who’s term-limited.

And in Nevada’s open 4th Congressional District, where Democratic Rep. Ruben Kihuen has decided not to run again after sexual harassment allegations, former Rep. Steven Horsford is expected to claim the Democratic nomination. He faces several more progressive challengers in the primary, and if one of them wins, it could endanger Democratic control of the seat. On the GOP side, former GOP Rep. Cresent Hardy is expected to win the Republican nomination, setting up a rematch with Horsford; Hardy beat Horsford in 2014, but lost two years later to Kihuen.