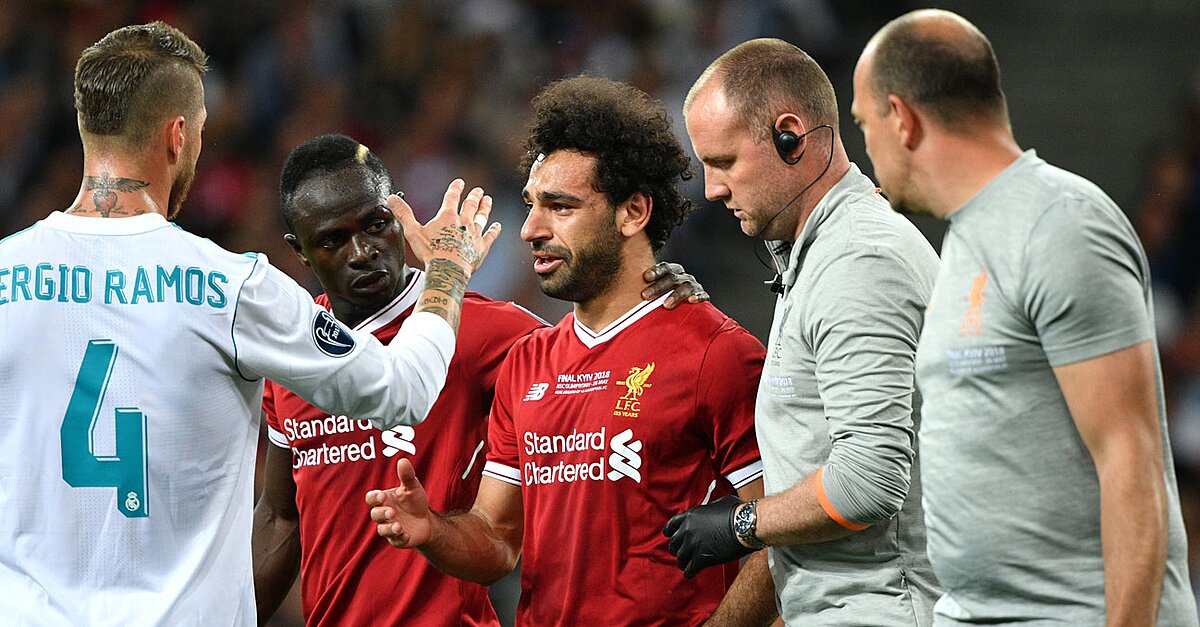 Follow along for live updates and highlights of goals and key plays as Real Madrid and Liverpool battle for the Champions League title.

The Champions League final has been marred by two key injuries.

Real Madrid is facing Liverpool with one final hurdle standing in the way of a European three-peat, but serious-looking injuries to Mohamed Salah and Dani Carvajal have altered the calculus in a big way.

Salah, whose 10 Champions League goals helped lead Liverpool to the final, was hurt just before the half-hour mark after being taken down by Sergio Ramos, suffering a left shoulder injury before walking off the field in tears. Moments later, Carvajal, who had just returned recently from a hamstring injury, looked to have suffered a recurrence as he, too, exited in tears. With the World Cup around the corner, the Egypt and Spain stars will surely hope for a positive prognosis.

On the field, Real Madrid is hoping to become the first team since Bayern Munich in 1976 to win three straight European titles, while Liverpool is hoping to end the Spanish side’s dominance in the competition while winning its first title since 2005.

Both sides came out looking to apply pressure early, with Liverpool’s high press forcing Real Madrid into an early turnover that nearly gifted Salah and Mane an opportunity in the first minute. A minute later, an Isco service forward forced Loris Karius to race off his line for a punch, though the play would have been negated due to an offside attacker.

Salah and Firmino then combined for another near chance, with the latter having a chested-down ball deflected into the path of right back Trent Alexander-Arnold, who couldn’t quite beat onrushing Real Madrid goalkeeper Keylor Navas to the ball in the eighth minute.

Real Madrid survived a wild 14th-minute sequence, in which Salah, Mane and Firmino all head goalward attempts blocked before a flying Navas punched away a cross from Alexander-Arnold from the right.

Ronaldo made his first contribution in the 15th minute, with Real Madrid breaking forward on the right. The superstar let a right-footed blast fly from medium range, but it whizzed over Karius’s crossbar and out for a goal kick.

Navas made another crucial play in the 23rd minute, and it came off another ball from Alexander-Arnold. The sequence started with James Milner playing a cross just behind Roberto Firmino, who settled and sprayed a pass wide. The young right back fired a low drive through traffic, but Navas got down to make the clean save without yielded a rebound.

Liverpool suffered a massive setback a couple of minutes later when Salah and Sergio Ramos got tangled, with the latter yanking the Egyptian down. He tried to return but was in obvious pain holding his left shoulder area. He was reduced to tears as he went back to the ground and was forced off at the half-hour mark.

Real Madrid suffered an injury setback of its own five minutes later, with Carvajal forced off in obvious pain.

With the focus back on those on the field, Real Madrid nearly went ahead just before halftime. Ronaldo had a powerful header from close range saved by Karius, and Karim Benzema scored on the rebound, but the Frenchman was in an offside position, thus negating the score.

Real Madrid came out of the halftime locker room on fire and nearly capitalized on a poor backwards touch in the back. Isco wound up with a clear look from inside the box, but he fired his chance off the crossbar, letting Liverpool off easy.

Real Madrid went ahead in bizarre fashion in the 51st minute, though. Karius was attempting an innocuous throw from his own area, when Benzema stuck out his leg and blocked it. It trickled into the vacant goal, giving Real Madrid a 1-0 lead.

Stay tuned here for live updates and highlights of goals and key plays from throughout this title bout (refresh for most recent updates).

The winner will go on to face Atletico Madrid in the UEFA Super Cup–the annual meeting between Champions League and Europa League winner–in Estonia on August 15.