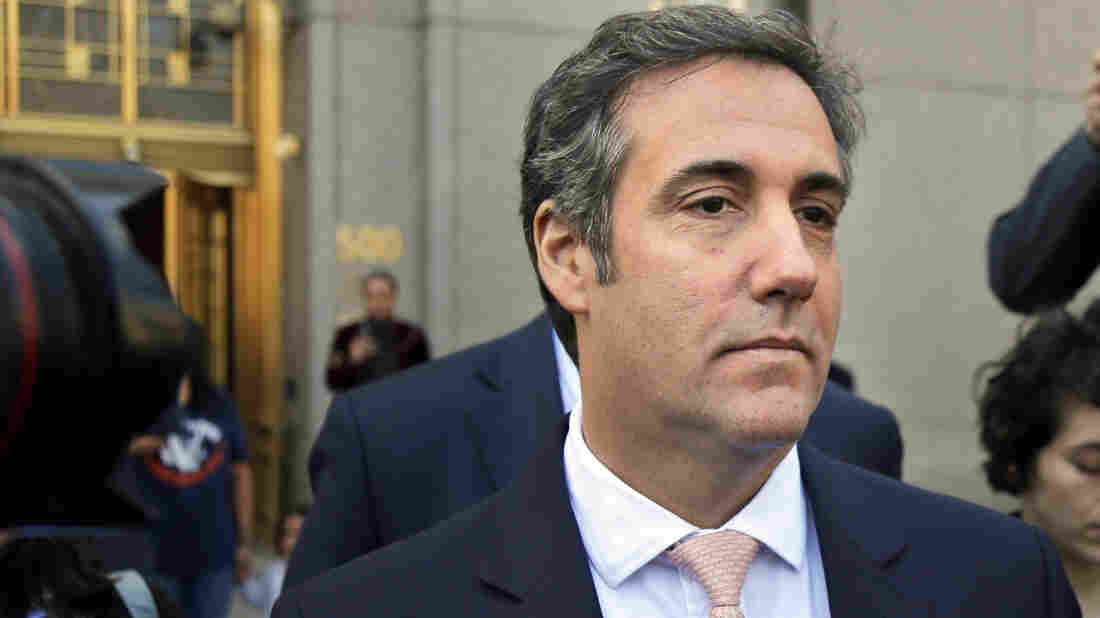 Michael Cohen, a personal lawyer for President Trump, leaves federal court in New York City in April. His legal troubles may test his loyalty to Trump, built over years of protecting his boss, in part by using legal threats. Seth Wenig/AP hide caption 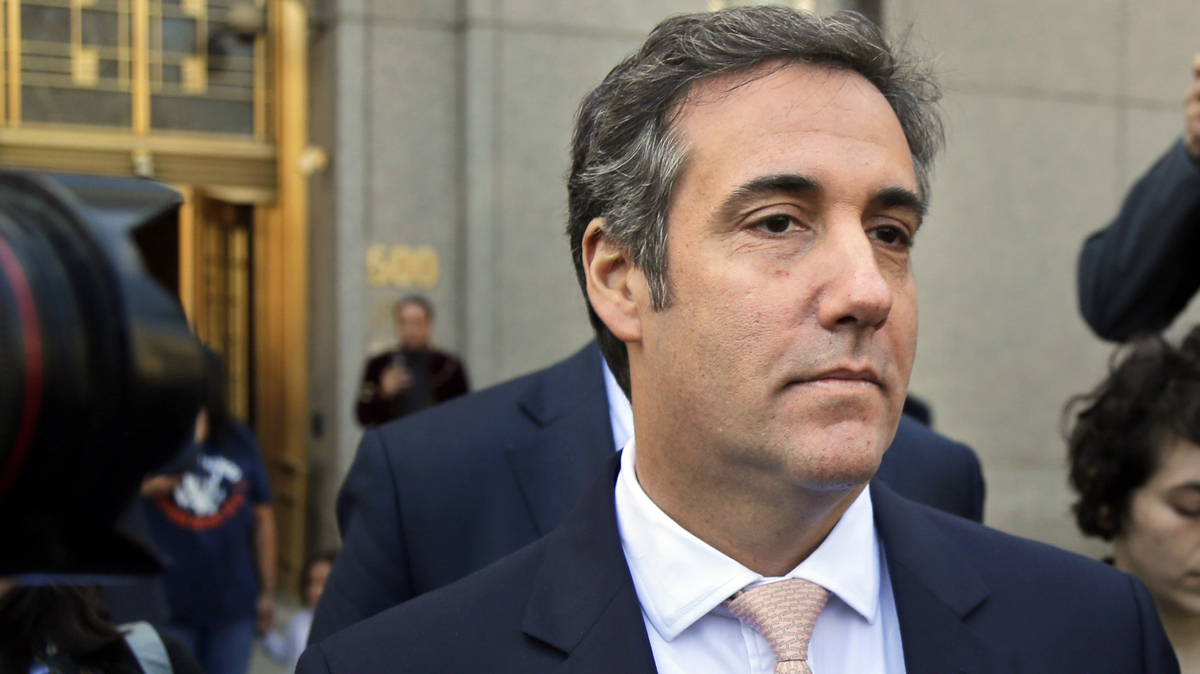 Michael Cohen, a personal lawyer for President Trump, leaves federal court in New York City in April. His legal troubles may test his loyalty to Trump, built over years of protecting his boss, in part by using legal threats.

But in the past, it was Cohen who has sought to put legal pressure on others to solve problems for his boss.

For the first time, audio recordings of Cohen’s legal threats, from a 2015 Daily Beast interview, are being published.

Conversation between Michael Cohen and NPR’s Tim Mak, reporting for the Daily Beast in 2015

And as part of reporting on Cohen’s history of legal threats, so is a previously little-noticed claim regarding Stormy Daniels.

In October 2016, weeks before Election Day — Michael Cohen arranged for Stormy Daniels to sign a non-disclosure agreement. The deal was that in exchange for $130,000, she wouldn’t talk about the allegation that she had a sexual relationship with Donald Trump in 2006.

The president denies this allegation. But Trump has admitted there was a non-disclosure agreement to buy Daniels’ silence.

Her lawyer, Michael Avenatti, now tells NPR that she was coerced into signing the agreement.

“In October of 2016, Michael Cohen made threats against my client Stormy Daniels, as it related to pressuring her to enter into the NDA and accept the $130,000 payment,” Avenatti told NPR, but he offered no additional details when pressed.

This is not the first time Avenatti has made a claim that Cohen pressured Stormy Daniels into signing a document. As news outlets were beginning to emerge about the NDA, Avenati alleged in a previous court filing in January 2018, that Cohen “through intimidation and coercive tactics, forced [Daniels] into signing a false statement” denying a previous sexual relationship with Mr. Trump.

Making legal threats on Trump’s behalf has been typical for Cohen. He is a lawyer, but Cohen is often referred to as a “fixer,” who cleans up issues for his boss before they become bigger problems.

Sam Nunberg, a political adviser close to Trump in the earliest days of the campaign, says Trump cultivated an aggressive environment within the Trump Organization, where Cohen worked under the title of “special counsel.”

“He was supposed to say and act the way Donald wanted him to act,” Nunberg said. “Michael had even expressed sometimes regret that he did certain things, or had to send nasty e-mails, or give nasty phone calls to certain reporters that he personally liked — because it was at the direction of Donald.”

Cohen’s supporters have suggested that there’s nothing wrong with making legal threats where appropriate.

Cohen sometimes followed through on his threats, for example helping to file a lawsuit against a former Miss USA contestant, Sheena Monin, who questioned the integrity of the pageant’s results after she failed to make it into the top 16 contestants. Her father had previously said that Cohen treated her with “arrogance and bullying and threats and intimidation.”

“People like to paint him as some kind of a thug out of New York. He’s an attorney and he knows what he’s talking about,” said Caputo. “And I think while he might push the bounds of propriety in some people’s eyes… Michael sees the line and doesn’t cross it. Most certainly he’s a high-wire walker in that kind of respect.”

For Cohen, no target was too big. Former Fox News host Megyn Kelly put tough questions to Trump at a Republican presidential debate. Cohen later retweeted someone who had written, “we can gut her”

“I’m telling you, in response to that allegation, that I received death threats, that I had security guards following me around, and that my old boss called Michael Cohen directly to say, ‘If Megyn Kelly gets killed it’s not going to help your client Donald Trump get elected,'” Kelly told Schwartz. “And Michael Cohen didn’t care.”

Nor was any target too small, like college student Tom Waddick, who for his satirical newspaper, the Harvard Lampoon, pranked the presidential candidate and went to Trump Tower to take a photo with him.

Waddick told NPR that when Cohen found out about it, he called up threatening to sue him and to get him expelled.

Cohen’s legal threats have generally been done in private — and stayed that way. But in 2015, when I was reporting for The Daily Beast, an online news outlet, Trump’s campaign was in ascendency.

I started writing about a 1993 biography of Trump written by former Newsweek reporter Harry Hurt, III. According to the book, The Lost Tycoon, Trump’s first wife Ivana claimed in a sworn deposition during her divorce proceedings that Donald Trump raped her.

As the book was coming out, she said she didn’t mean rape in a criminal or literal sense, and has since praised the president. Trump has called the claim false.

When I reached out to campaign spokesperson Hope Hicks about the claim in the book, I got an angry call from Cohen in return.

His first tactic was to try and convince me not to run the story — but he did so by falsely claiming that spousal rape was not a crime.

This is the first time that audio is being published.

“You’re talking about Donald Trump, you’re talking about the frontrunner for the GOP, presidential candidate, as well as private individual, who never raped anybody and of course understand that by the very definition you can’t rape your spouse,” Cohen said.

Michael Cohen’s false claim about the definition of spousal rape

Spousal rape has been illegal in the state of New York since 1984. Ivana Trump’s claim involved an incident in 1989.

But Cohen’s efforts to prevent the story from being written didn’t end with that false claim.

“Mark my words for it, I will make sure that you and I meet one day over in the courthouse and I will take you for every penny you still don’t have, and I will come after your Daily Beast and everybody else that you possibly know,” Cohen said. “Do not even think about going where I know you’re planning on going. And that’s my warning for the day.”

“Michael, besides the warning, do you have a substantive comment that I can include in the piece that reflects your views on this?” I responded.

“I have no views because there’s no story,” Cohen said.

“So I’m warning you, tread very f***ing lightly because what I’m going to do to you is going to be f***ing disgusting. Do you understand me? Don’t think you can hide behind your pen because it’s not going to happen.” Cohen said. “I’m more than happy to discuss it with your attorney and with your legal counsel because motherf***** you’re going to need it.”

He also talked about past lawsuits, like one against Univision. The Spanish-language network dropped Trump’s Miss USA pageant because of his disparaging comments about Mexican immigrants when he launched his presidential bid in 2015.

“I think you should go ahead and write the story that you plan on writing, I think you should do it because I think you’re an idiot. Alright, and I think your paper is a joke,” Cohen said. “And it’s going to be my absolute pleasure to serve you with a 500 million dollar lawsuit like… I did to Univision.”

“You know after he did that interview with you… Corey Lewandowski and Hope Hicks were pushing for Michael to be fired and Trump was seriously considering it,” Nunberg said.

Cohen later apologized publicly for his remarks about spousal rape.

Once Trump was elected, Cohen found himself on the outside looking in, despite years of service.

“Nobody was screwed over more by Donald than Michael Cohen,” Nunberg said. “Michael has been extremely loyal to Donald, was there from the very beginning. And Donald treated him like garbage.”

Now, Cohen is at a crossroads. Does he flip and protect himself by discussing with prosecutors the private information he has from working with Trump for so many years — or does he remain silent?

“First of all, the president values loyalty,” Caputo told NPR. “He’s quite famous for it now. Michael Cohen exhibited that loyalty long before I arrived on the scene in Trump Tower… He was always defending the president, always looking out for his best interests, and I saw that as some of the most remarkable loyalty that I’ve ever seen in the workplace.”

The strength of that loyalty will determine the next chapter in the saga between the President of the United States and his personal lawyer.