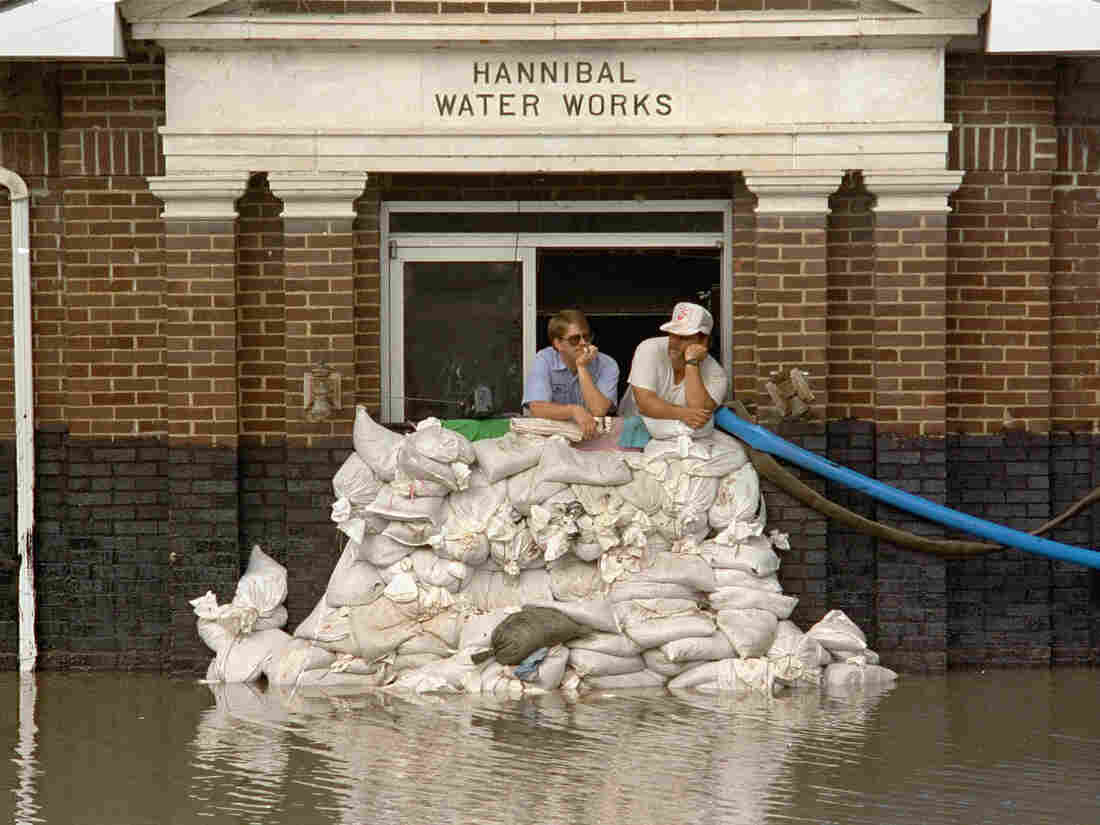 Mike Stone, left, and Andy Sherman in the pumping station for Hannibal, Mo., during a flood in 1993. The city has since constructed a flood wall, and flood managers have built up levees to protect against flooding. But scientists warn those structures are making flooding worse. Cliff Schiappa/AP hide caption 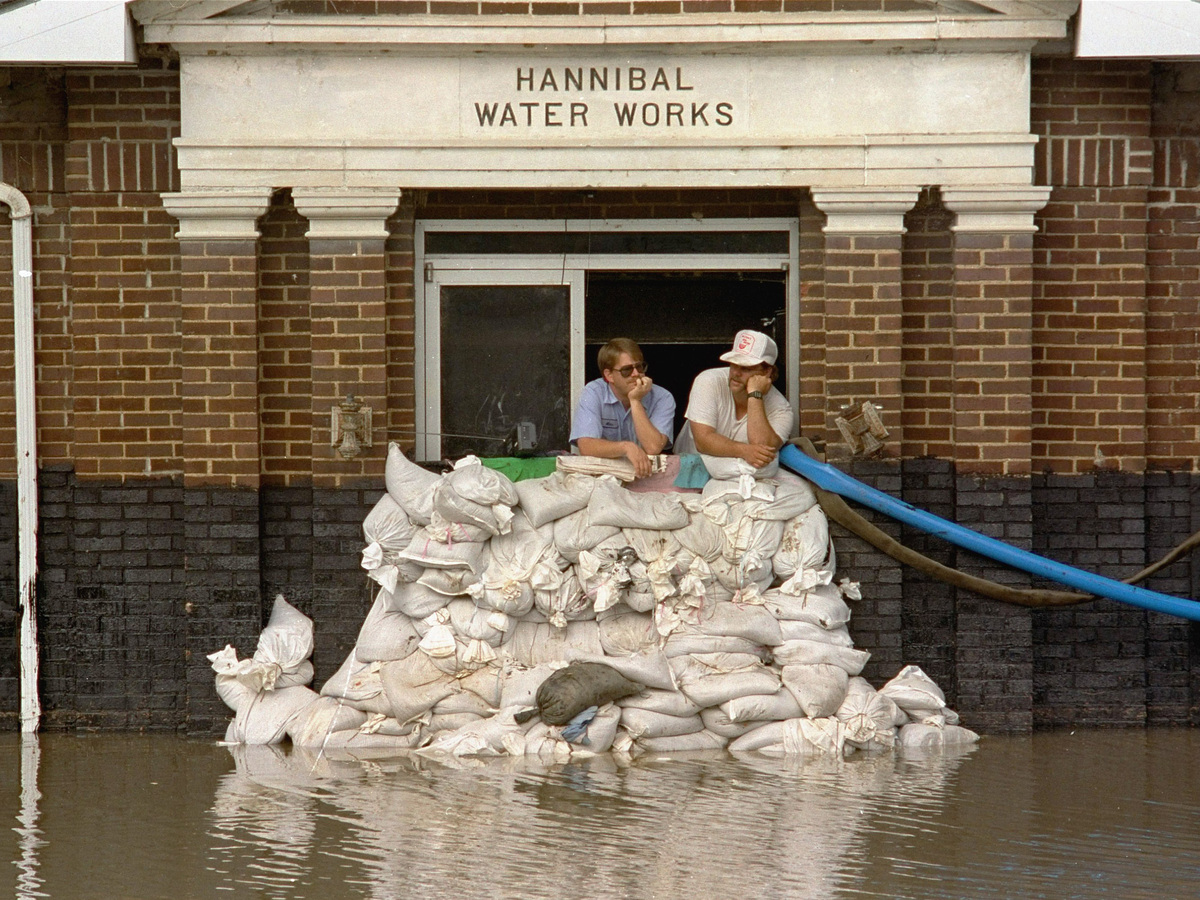 Mike Stone, left, and Andy Sherman in the pumping station for Hannibal, Mo., during a flood in 1993. The city has since constructed a flood wall, and flood managers have built up levees to protect against flooding. But scientists warn those structures are making flooding worse.

Floods on the Mississippi River are getting more frequent and more severe. But scientists warn that the infrastructure meant to protect towns and farms against flood waters is making the problem worse.

A series of analyses have helped confirm what engineers have posited for more than a century: that earthen levees built along the river are increasing flood risk for everyone, and especially hurting those who live across from them.

“When a new or larger levee is built there is often hew and cry, and if there isn’t, there should be,” says Nicholas Pinter, a geologist and the associate director of the Center for Watershed Sciences at the University of California, Davis.

“What you’re doing in many cases is taking a flood plain out there — it can be 5 [or] 6 miles wide — and you’re forcing the water that would otherwise spread across that area to go through a narrow passageway.” As the passageway gets narrower, the water flows faster and higher,

The resulting floods are more severe than they would have been without the levees, which then drives people to build more levees, driving a “hydrologic spiral” of flooding, levees, more flooding and higher levees.

Levee hazards are not a new idea. In 1852 an engineer named Charles Ellet Jr. wrote a report for the federal government in which he warned that confining the Mississippi River to a narrow channel caused the water to “rise higher and flow faster.”

But despite 19th century warnings, levees quickly became the go-to solution for controlling the river. After the great flood of 1927, Congress required the U.S. Army Corps of Engineers to build a massive system of levees and dams on the Lower Mississippi.

A study published earlier this year attempted to quantify the effect of that infrastructure on flooding. The authors examined river-adjacent sediment and tree rings going back 500 years, and found that floods have become significantly more severe and frequent in the last 150 years.

Increased precipitation from climate change, combined with the effects of levees and dams, have “elevated the current flood hazard to levels that are unprecedented within the past five centuries,” the authors write.

But the hydrologic spiral is a powerful thing.

Doubling down on levees

Faced with major floods every other year along some stretches of the Upper Mississippi, which has historically had fewer levees than the lower part of the river, many floodplain managers have built up levees and flood walls, even though doing so will only make the problem worse in the long-term.

An investigation by ProPublica and The Alton Telegraph found drainage districts in Missouri and Illinois are lobbying to reduce federal flood regulation, paving the way for more and higher levees in communities that want them.

A model released earlier this year by the U.S. Army Corps of Engineers showed that a handful of drainage districts north of St. Louis aren’t waiting for permission; they have already raised their levees above the level authorized by the Corps.

The largest of them, the Sny Island Levee Drainage District in Illinois, raised its levees in response to a flood in 2008, which was the second largest flood ever recorded on the Upper Mississippi. “In a flood fight, you raise your levees at least two feet higher than the forecast crest, and we did that,” explains the drainage district superintendent, Mike Reed. 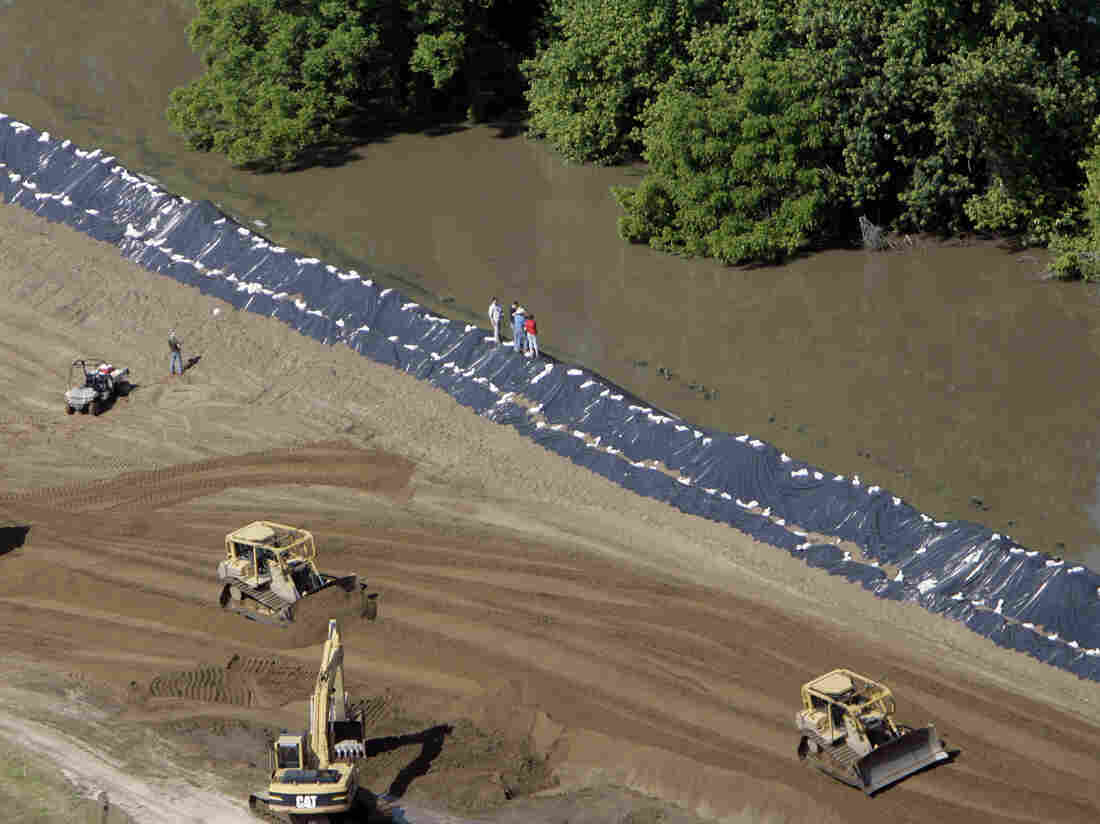 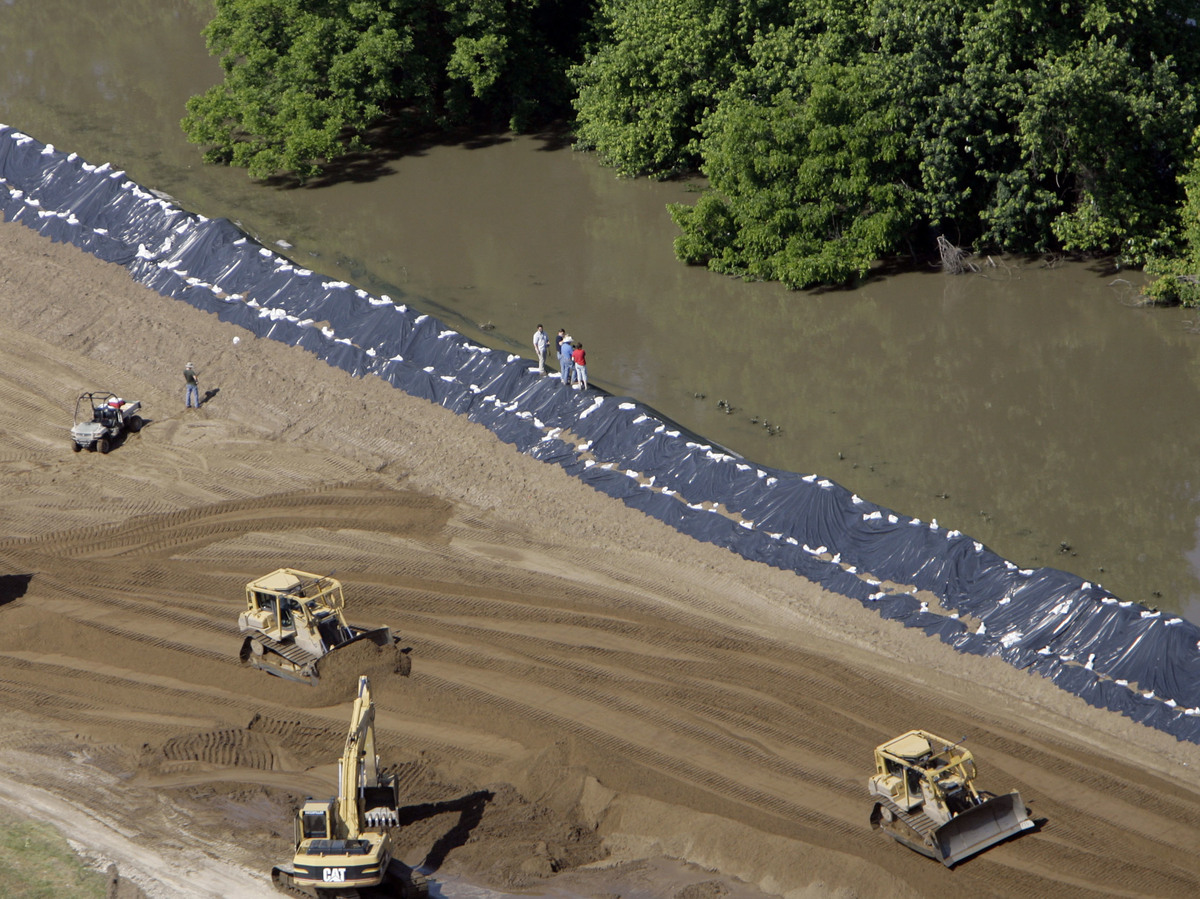 Crews push extra sand onto Mississippi River levees in the Sny drainage district in Illinois during a flood in June 2008.

After the water receded, the district decided to leave the extra sand where it was to protect against the next flood, even though that violated federal height regulations. In 2015, the Army Corps announced it would withhold future federal funds for maintaining the overbuilt levees.

Reed says the drainage district assesses about $2 million each year from local land owners to pay for the levee system, and that the investment has paid off.

But multiple studies show overbuilt levees are increasing flood risk for people on both sides of the river. An analysis released earlier this year found the Sny levees have increased the height of the river during floods, pushing water into towns and farms across the river, as Eli Chen of St. Louis Public Radio has reported.

‘They’re sending the water our way’

“They’re sending the water our way, and there’s nothing we can do about it,” says Al Murry, the emergency manager for Pike County, Mo. The county has been hit with multiple so-called 100-year floods in the last decade, destroying crops on Murry’s side of the river while the other side stayed dry.

“You know, every year you just spend enormous amounts of money. It makes a mess out of a lot of property. A lot of crops are going wasted,” he says.

Murry, who is a former fire fighter, says he thinks the Sny levees are indicative of short-term thinking and poor risk assessment. “People are greedy. That’s a lot of what’s going on on this river right now. It’s not good for anyone.”

Indeed, people who study the river say levees can also increase long-term flood risk for the farmers who pay to be protected by them.

“Just because you live behind a great, big, strong levee does not mean that there’s no chance of getting flooded,” explains Pinter. “There are two types of levees: those that have failed and those that will fail.”

When tall levees fail, the people who live and work behind them are less likely to be carrying adequate flood insurance. That’s because when levees are high enough to protect against floods with a one percent chance of occurring in any given year, the federal government no longer requires homeowners living behind them to carry flood insurance. 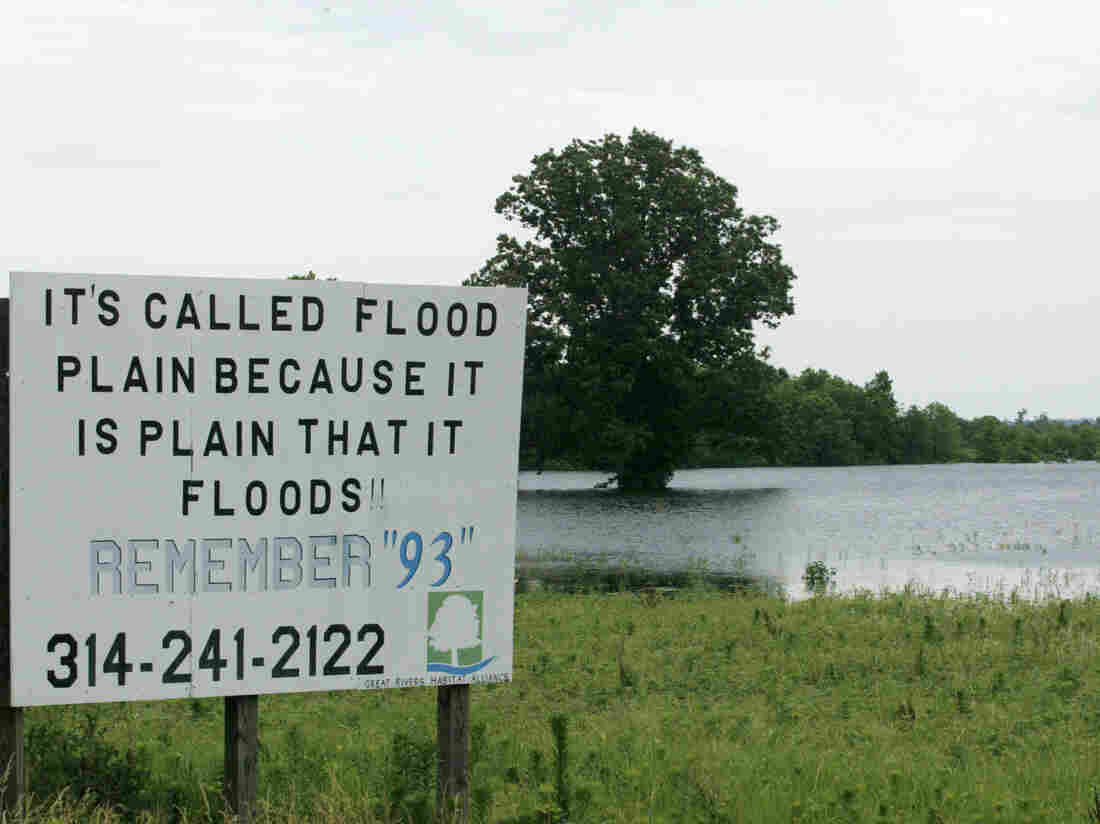 A sign in a field near Winfield, Mo., during a Mississippi River flood in 2008. The area suffered a similarly serious flood in 1993. The frequency of severity of flooding up and down the river have increased due to climate change and river control structures such as levees. Tom Gannam/AP hide caption 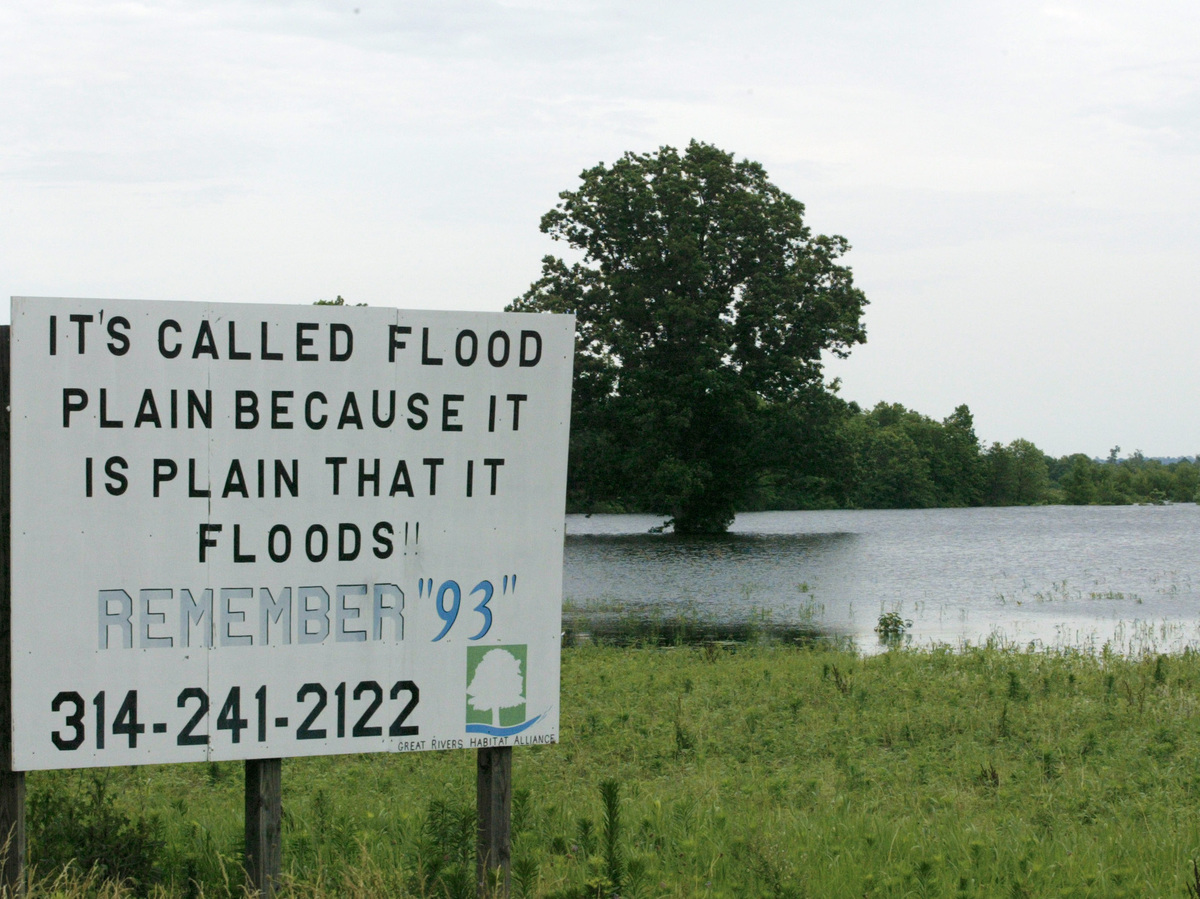 A sign in a field near Winfield, Mo., during a Mississippi River flood in 2008. The area suffered a similarly serious flood in 1993. The frequency of severity of flooding up and down the river have increased due to climate change and river control structures such as levees.

Risk is similarly obscured in the crop insurance market. Farmers behind the Sny levees are paying half as much to insure fields along the Mississippi River as their neighbors across the river are, explains crop insurance salesman Matt Jones. “It’s based on flood risk, and the area behind the levee is considered lower risk,” he says.

Since crop insurance is a federally subsidized program, if the levee-protected fields are ever inundated, much of the cost would be born by taxpayers. “When they do have a catastrophic flood, it’s going to be a big loss,” says Murry. “It’s going to be huge. It’s going to affect the cost of living. And everybody’s going to pay for it.”

Reed insists the Sny’s risk assessment is sound. “In an excess of 100 years we’ve had one levee breach,” he says. He doesn’t agree with data that shows levees increase flood risk. “A model is a theory. What actually is happening, to me, is more important that what a theory says.”

Reed say people feel safe behind his district’s levees, at least relatively so. But he admits, “Mother Nature is a tough thing to predict.”