Leicester City will host Arsenal on Wednesday in their final Premier League home match of the 2017/18 season – a season which has left fans of both clubs disappointed and frustrated with their sides’ performances.

It will definitely be Arsène Wenger’s final trip to the King Power Stadium as the Gunners manager, after 22 years at the helm. It may also be Claude Puel’s last home match in charge of Leicester, as he has come under increasing pressure after a series of poor results.

Like Arsenal – who now face the prospect of a second successive season without Champions League football – the Foxes have nothing more than pride to play for on Wednesday. Yet this in itself is a testament to Puel’s achievements since taking over from Craig Shakespeare.

When Puel’s predecessor was fired in October, the Foxes were mired in the relegation zone and had picked up just six points from eight matches. Now they have 44 and are still well placed to finish in the top half of the table, despite a dismal recent run.

Foxes fans should never forget what happened to Puel’s former club Southampton after they let him go. Having finished eighth last season, the Saints are now embroiled in a desperate relegation battle.

Admittedly, it isn’t hard to understand why Foxes fans are disgruntled – their side have lost four of their last five matches, with their solitary point coming in a goalless stalemate at home to the Saints.

Again, however, it is a measure of Puel’s success that his side could afford to pick up just one point from a possible 15 without having to worry about the possibility of relegation.

Meanwhile, Wenger’s imminent departure reflects the gulf in expectations between the two sides. If Leicester had finished in the top six, reached the EFL Cup final and lost narrowly in the semi-finals of the Europa League, Puel’s job would surely be safe now – yet the same can’t be said of Wenger, who has admitted that his resignation wasn’t entirely his own choice.

Perhaps the most incredible statistic of Wenger’s final season at the Emirates is that his side have lost every away game in the Premier League so far this calendar year. No, you didn’t misread that: the Gunners have lost away to Bournemouth, Swansea, Tottenham, Brighton, Newcastle and Manchester United in 2018.

If it weren’t for Arsenal’s mostly impressive home form in this season’s Premier League – including a run of five successive victories which culminated in Sunday’s 5-0 thumping of Burnley – Wenger’s final season really would have been a nightmare for Gunners fans.

The Foxes are fortunate that the only prize at stake on Wednesday is their pride, as they have no fewer than six players ruled out for the clash with the Gunners.

Matty James, Wilfred Ndidi, Ben Chilwell, Robert Huth and Daniel Amartey are all sidelined with injuries, while Marc Albrighton is still suspended after being sent off for a professional foul in the Foxes’ humbling 5-0 defeat at Crystal Palace.

In addition, Kasper Schmeichel and Shinji Okazaki are both still recovering from ankle injuries and are unlikely to feature on Wednesday, while Aleksandar Dragović is carrying a shoulder injury. However, there is a good chance that Danny Simpson will be available despite a groin strain.

Meanwhile, Arsenal have their own injury woes and will be missing key players at the King Power Stadium.

Mesut Özil, Laurent Koscielny and Santi Cazorla are all sidelined with injury for the rest of the season, while Egypt midfielder Mohamed Elneny will also miss Wednesday’s match with an ankle injury. 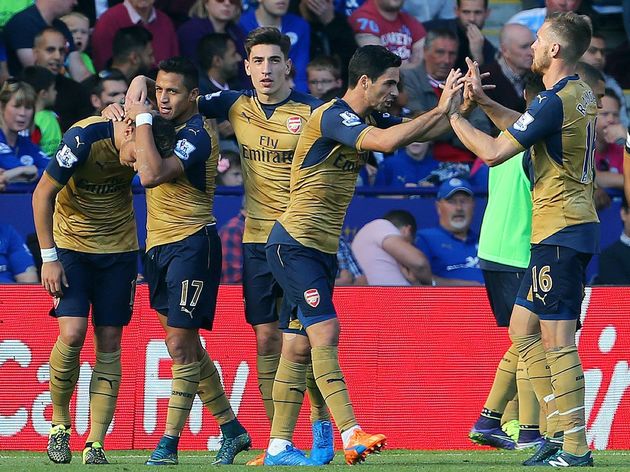 Gunners fans will be hoping that their side can show the kind of attacking flair and ruthlessness which demolished Leicester in September 2015.

Jamie Vardy’s brace was to no avail, as Alexis Sánchez scored a hat trick – a tap-in, a header and a fine long-range effort – after Theo Walcott had cancelled out Vardy’s opener. The Leicester striker’s second was a mere consolation, before Olivier Giroud rubbed salt into Leicester’s wounds with a strike deep into added time.

It was the Foxes’ first Premier League defeat of the season after an impressive start, and at the time it felt like a reality check for Claudio Ranieri’s side. After witnessing Arsenal’s demolition of Leicester’s brittle defence, few (if any) could have predicted that the Foxes would lose just two more Premier League matches all season on their way to becoming Premier League champions.

If anyone thought Vardy’s magnificent scoring record in Leicester’s title-winning season was a mere flash in the pan, he has emphatically proved them wrong. The England striker’s 17 league goals this season are a major reason why the Foxes effectively secured their Premier League status as early as March.

However, he has failed to score in his last three matches, and so have Leicester – which only emphasises how dependent they are on his goals.

With Laurent Koscielny injured and Shkodran Mustafi relegated to the bench in the Burnley game, Vardy may find himself up against Calum Chambers, whose performances this season have been rather mixed. The Foxes striker may feel he has a better chance of increasing his goal tally against Chambers at the King Power than against Tottenham at Wembley on Sunday.

This is an incredibly difficult result to call, simply because both sides have been so dire recently. Arsenal have lost all six of their away matches this year, while Leicester have been poor in their last five games.

Yet there were some signs of improvement in the Gunners’ narrow defeat against Manchester United, while the Foxes will no doubt be keen to finish their final home match of the season on a high.

There is little to choose between the sides, so a draw looks like a plausible outcome.