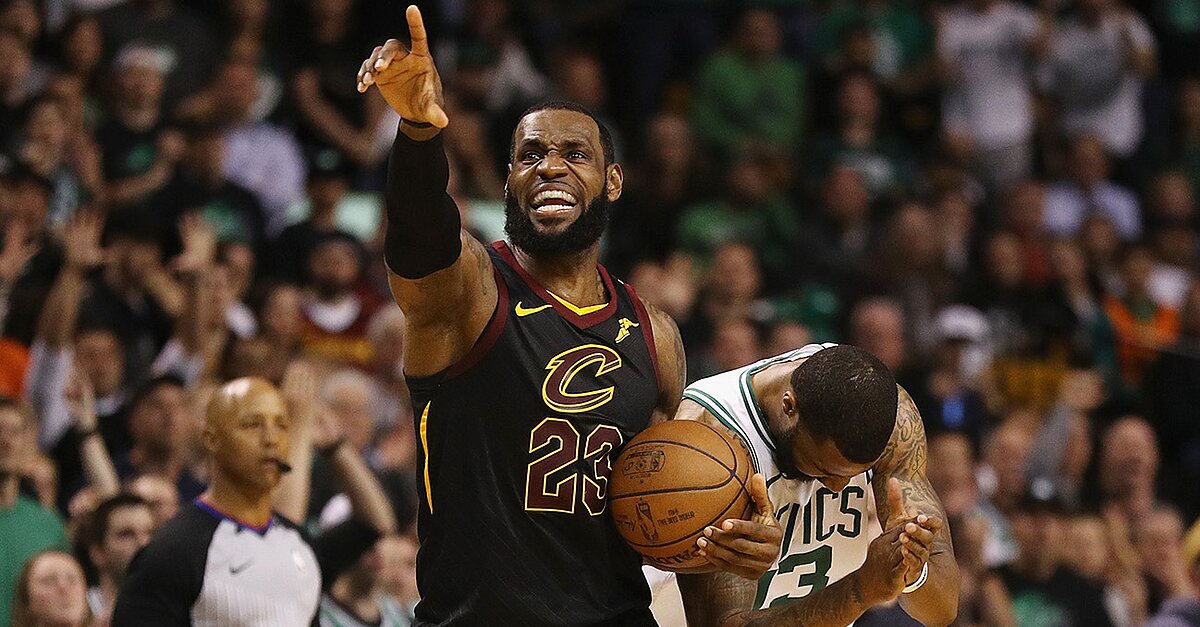 LeBron James won’t settle for anything less than a shot at a championship. James is headed to his eighth straight Finals—and fourth straight with Cleveland—after the Cavaliers escaped Boston with an 87–79 win in Game 7 of the Eastern Conference finals on Sunday. James played all 48 minutes in the contest, scoring 35 points while collecting 15 rebounds and dishing out nine assists. Jeff Green aided the Cavs’ effort with 19 points, while Jayson Tatum had 24 in a losing effort for the Celtics.

Game 7 was close if not particularly well executed. Both teams looked tight, and neither shot particularly well from the field. The difference, as it almost always is in these situations, was James. LeBron entered Sunday averaging 34.9 points in Game 7s in his career. He met that average while shooting 50% from the field, and he received just enough help from his supporting cast to secure the win.

Boston’s offense just didn’t have someone who could steal a bucket down the stretch. The Celtics’ defense was spectacular, but the team shot awfully from three (7-of-39), and nobody could play the role of closer in the waning moments. Tatum played beyond his years in his second career Game 7, but he, Al Horford and Jaylen Brown couldn’t find easy shots in the final minutes. Brown will especially look back on this game with regret, shooting 5-of-18 and finishing with 13 points.

The aesthetic quality of Sunday’s game will be forgotten over time. What will be remembered is James adding to his legend with another signature performance. In Year 15, LeBron has arguably never been scarier. There’s a sense of inevitability with James that was absent during earlier stretches of his career. It’s not that LeBron wasn’t clutch, but there was a fallibility to his game that has seemingly disappeared with age. With stars stripped away—the Cavs were without Kevin Love on Sunday—James is almost freer to be selfish. And the more LeBron puts on his own shoulders, however large the burden, the more he delivers.

This wasn’t a Game 7 for the ages. But the fact that James’s 35 points were merely average for him in this situation speaks to his status as one of the sport’s all-time greats. If you were bored for parts of Sunday’s game (which certainly featured its fair share of bricks and a slow pace), it’s in part because James’s incredible performances are quite literally becoming routine.

What all this means for the Finals is unclear. For all of LeBron’s individual brilliance, his team’s shortcomings are typically only able to be masked during intraconference play. What Sunday’s win ensures is that more conversations will be had about legacy, and James’s championship performance will be judged in the context of a team that just asked Jeff Green to play 42 minutes in a Game 7.

What’s clear is this: There is no historical precedent for what James is doing. Playing 48 minutes in Game 100 of the NBA season in his 15th year in the league, entering the ninth Finals series of his career? The limits of what he can do to his body apparently don’t exist, and if the East couldn’t beat James this year, then when?

The Celtics, Sixers and maybe the Raptors will all be better next season. But how much better will they need to be to beat James? LeBron’s supporting cast may not be as hapless as SNL skits would suggest, but he’s also playing with a degree of difficulty that most stars of his caliber are actively avoiding with their offseason decisions.

It’s possible you or someone you watched Game 7 with felt a pang of anger when the Cavs won. Who wants to see this version of the team playing in its fourth straight Finals? But LeBron alone makes it all worth it. James is on the back nine of his career, even if his eye-popping stats would suggest otherwise. We truly are close to the day when LeBron will no longer be playing in the Finals. What Sunday showed is it will take a profound collection of greatness to keep James from his championship shot.