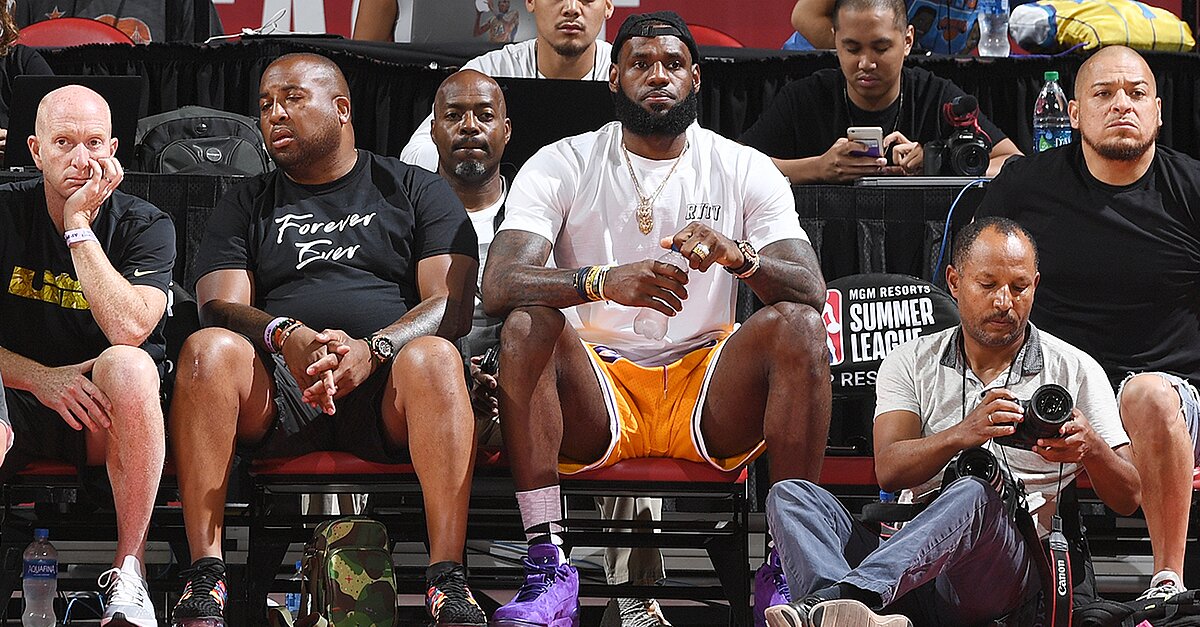 LAS VEGAS — Although he has still yet to be formally introduced by the Lakers, LeBron James made his debut in team gear at the Thomas & Mack Center on Sunday.

James entered the building in purple and gold shorts with “Lakers” script across the front and took a courtside seat on the baseline, where he watched L.A. defeat Detroit 101-78 in the first of four Summer League quarterfinal games. His shorts, which retail for $500, are a Just Don and Mitchell & Ness collaboration and were already listed as sold out on Sunday afternoon. The four-time MVP also wore purple Nikes, a white t-shirt emblazoned with “RWTW” (roll with the winners) and a black hat turned backward.

After announcing his decision to leave the Cavaliers for the Lakers with a brief press release on July 1, James jetted to Italy for a family vacation. While he has yet to conduct a press conference since joining the third team of his career, a picture of James signing his contract with Lakers GM Rob Pelinka and his agent Rich Paul surfaced on July 9. Earlier this week, James no-showed at a pizza party in L.A. after rumors surfaced that he might attend.

When he entered the lower bowl just before tip-off on Sunday, James was greeted by a standing ovation from a heavily pro-Lakers crowd, many of whom were already wearing his No. 23 jersey. “I love you, LeBron,” one fan shouted during the second half.

James made a point to greet his new teammates, hugging Lakers guard Josh Hart, a favorite to win Summer League MVP, and dapped up Lakers forward Brandon Ingram, who watched from the sideline. He also cheered on Svi Mykhailiuk and saluted a Lakers fan dressed in a Lonzo Ball jersey after he hit a half-court shot.

Following the Lakers’ win, James departed quickly, choosing not to stick around to watch the Cavaliers face the Raptors in Sunday’s second game. Before he left, though, James exchanged some good-natured banter with Cavaliers coach Tyronn Lue. He did not take questions from the media.

High-profile players have been a consistent presence at Summer League games this season. Bucks forward Giannis Antetokounmpo watched his brother, Kostas, play for the Mavericks. Other notable stars to drift in and out of the gyms here over the past days include Rockets guard Chris Paul, Celtics guard Kyrie Irving, Sixers guards Ben Simmons and Markelle Fultz, Jazz guard Donovan Mitchell and Warriors center DeMarcus Cousins.

The Lakers, who won the 2017 Summer League title, are a perfect 5-0 this year and will face either the Cavaliers or Raptors in the semifinals on Monday.