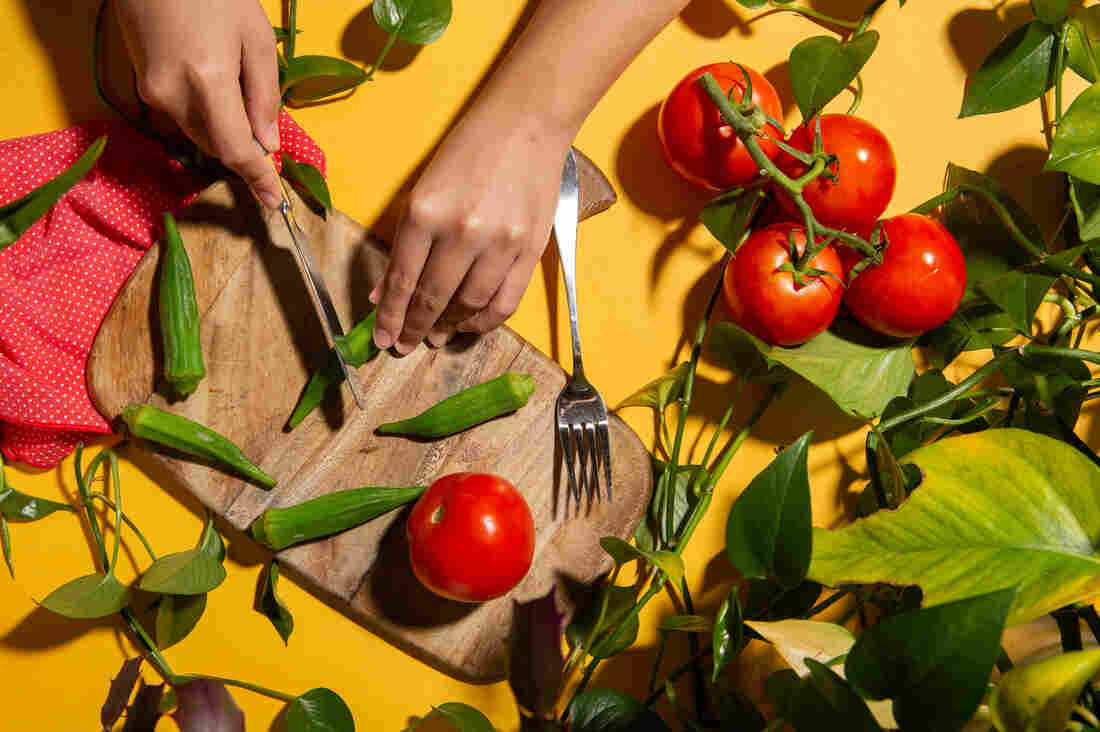 Okra slime changes when its pH changes. To make okra less slimy, says botanist Katherine Preston, cook it with an acid, which changes the properties of the molecules in the mucilage and renders it far less viscous. Southerners cook okra with tomatoes, which provide plenty of acid. Mary Mathis/NPR hide caption 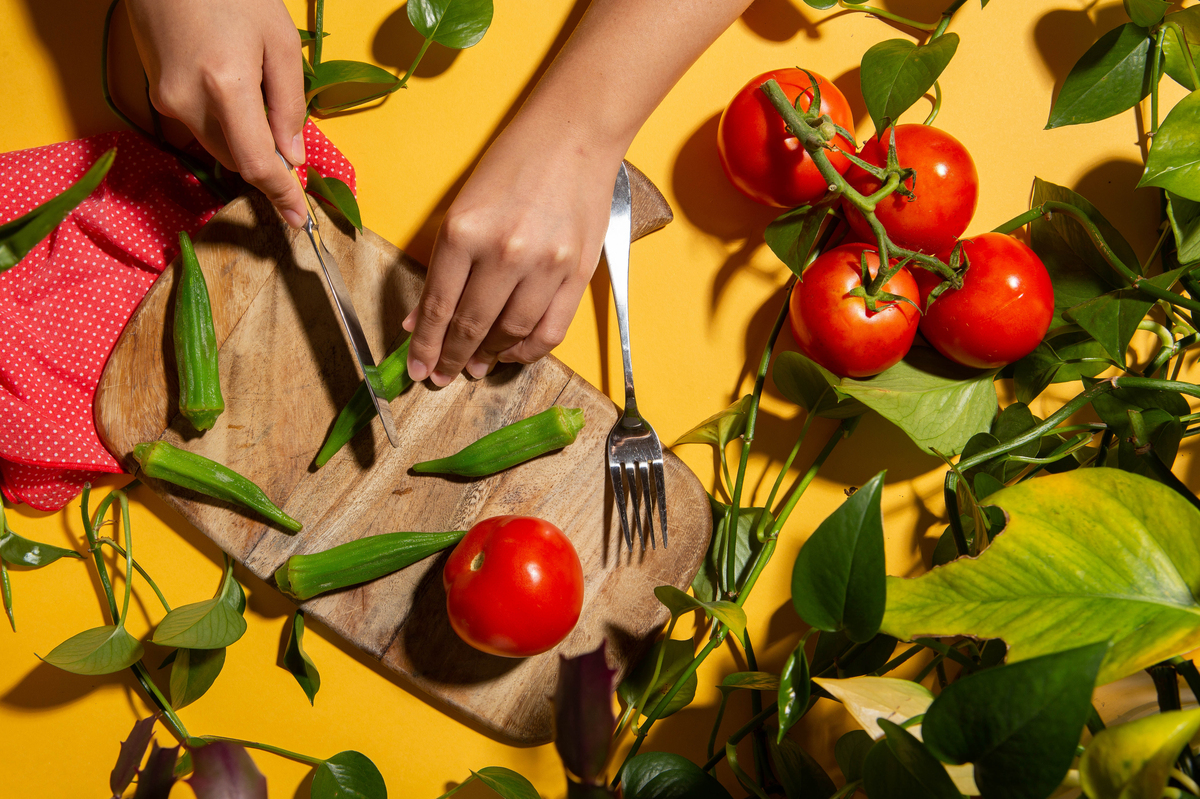 Okra slime changes when its pH changes. To make okra less slimy, says botanist Katherine Preston, cook it with an acid, which changes the properties of the molecules in the mucilage and renders it far less viscous. Southerners cook okra with tomatoes, which provide plenty of acid.

Have you ever wondered why kiwi fruits are green instead of red? Why okra is slimy but cooking it with tomatoes cuts the goo factor? Or how artichokes became giant balls of thick, spiny leaves endlessly furled over a small, soft heart? If so, you’re not alone.

In 2012 two botanists, Katherine Preston of Stanford University and Jeanne Osnas of the Alaska Center for Conservation Science, started a blog called Botanists in the Kitchen to answer exactly those kinds of questions.

You might think that botanists spend most of their time exploring fields, forests, parks, farms or wilderness areas, working to identify, study and protect the rich bounty of the plant world. In contrast, the kitchen, that warm hub of domesticity, might not seem like an obvious place for a botany lesson. But it offers many opportunities for culinary and botanical exploration. Imagine a botanist exploring the intricacies of plant science while preparing peach mint jam, fried okra with mole sauce, or almond cake. That’s exactly what this blog does.

How did they get started? Osnas took one of Preston’s botany courses at Stanford, where she taught her students in part by having them study fruits. The two realized that one great way to teach people about the subject was through the plants they love to eat. Botanical information in books, they found, was often full of dense science and technical lingo that was too difficult for the lay reader.

“And I,” says Osnas, “am deeply interested in evolutionary relationships, how evolution creates the same flavors and tastes again and again.”

Why, for instance, does nature love lemon so much? In a post on the evolution of lemon flavor, Osnas notes that nature produces lemons (the fruit) along with lemon balm, lemon verbena, lemon basil, lemon thyme, lemon mint, lemon myrtle, lemongrass, and more. Lemon flavor derives from just a few essential oils: citral, linalool, limonene, geraniol, and citronellal. These oils have evolved multiple times on different branches of the evolutionary tree.

The essential oils of all these plants contain lemony “terpenoids,” compounds that protect them from pests. “When you rub a verbena or mint-family leaf between your fingers,” says Osnas, “you rupture the hair-like growths, called glandular trichomes, and release some of the most fragrant substances this planet has to offer. They may be repellent to bugs, but hardly to us.”

To make a sweet syrup out of these lemony plants, Osnas boils the fresh leaves in sugar and water in a steel pot and massages them together for a few minutes to release the essential oil. She then boils, strains, boils again, and lets the syrup cool. Adding vodka extends its shelf life. “I add it to club soda, and drizzle it over ice cream or an almond cake,” Osnas says.

What about artichokes? They’re one of the strangest-looking vegetables around. You’ll understand them far better, says Preston, once you realize they actually belong to the sunflower family, which itself contains more than 20,000 species of flowers. All those spiny “leaves” closing over the interior, like fronds hiding a secret? They are hiding a head that, if you let it keep growing, will sprout hundreds of florets. The spiny leaves (called bracts) open and a spray of purple tubular florets fan out. “Each of those tubes is a tiny flower,” explains Preston, “and in principle could make one single seed, just like a seed you get from sunflowers.” Why so many flowers instead of just one? Pollinators are more attracted to a cluster, which from a distance looks like a single huge flower.

As for recipes, Preston says, “although artichokes are notoriously ill-suited to wine, many experts recommend pairing them with an acidic dry white. I like to sip on Navarro gewürztraminer because of its distinct citrus notes.”

Another plant and culinary riddle: Why are kiwis green when ripe? Fruits are like the leaves of a tree — green until they shut off their chlorophyll, at which point they turn brilliant hues of red, orange, purple, blue to entice predators to eat them and poop out their seeds. 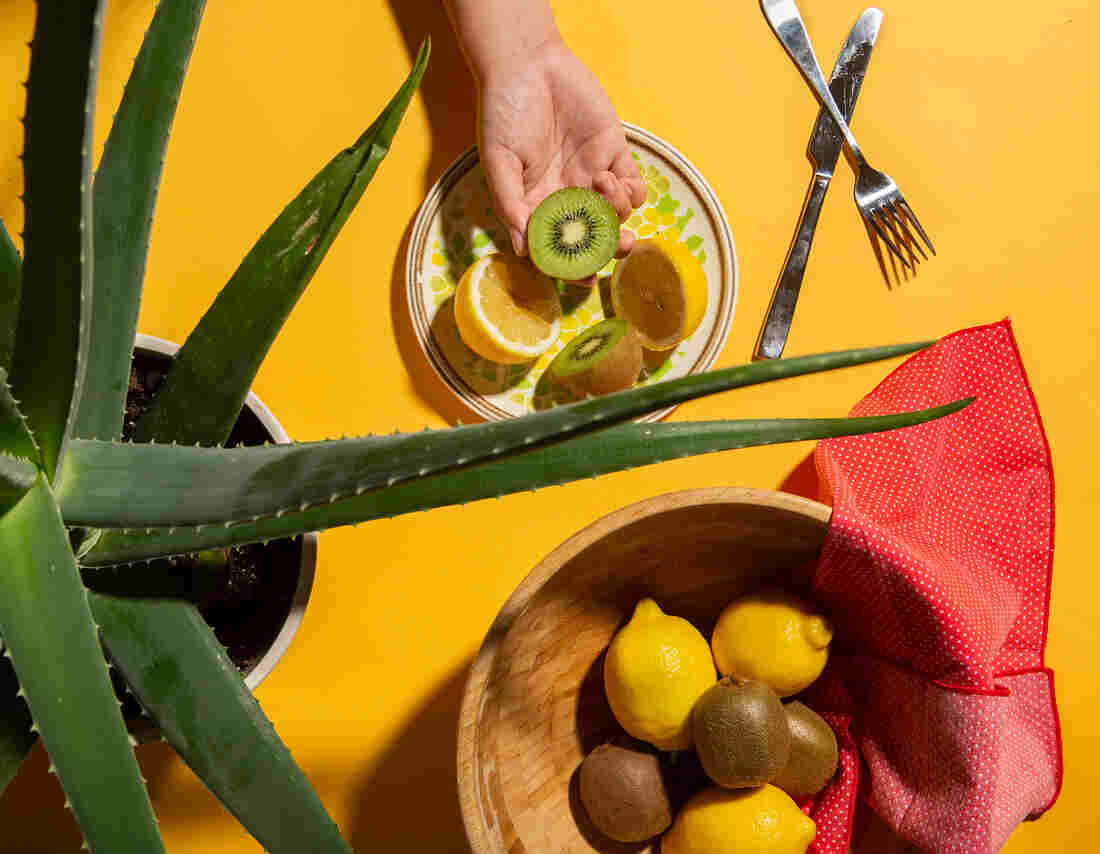 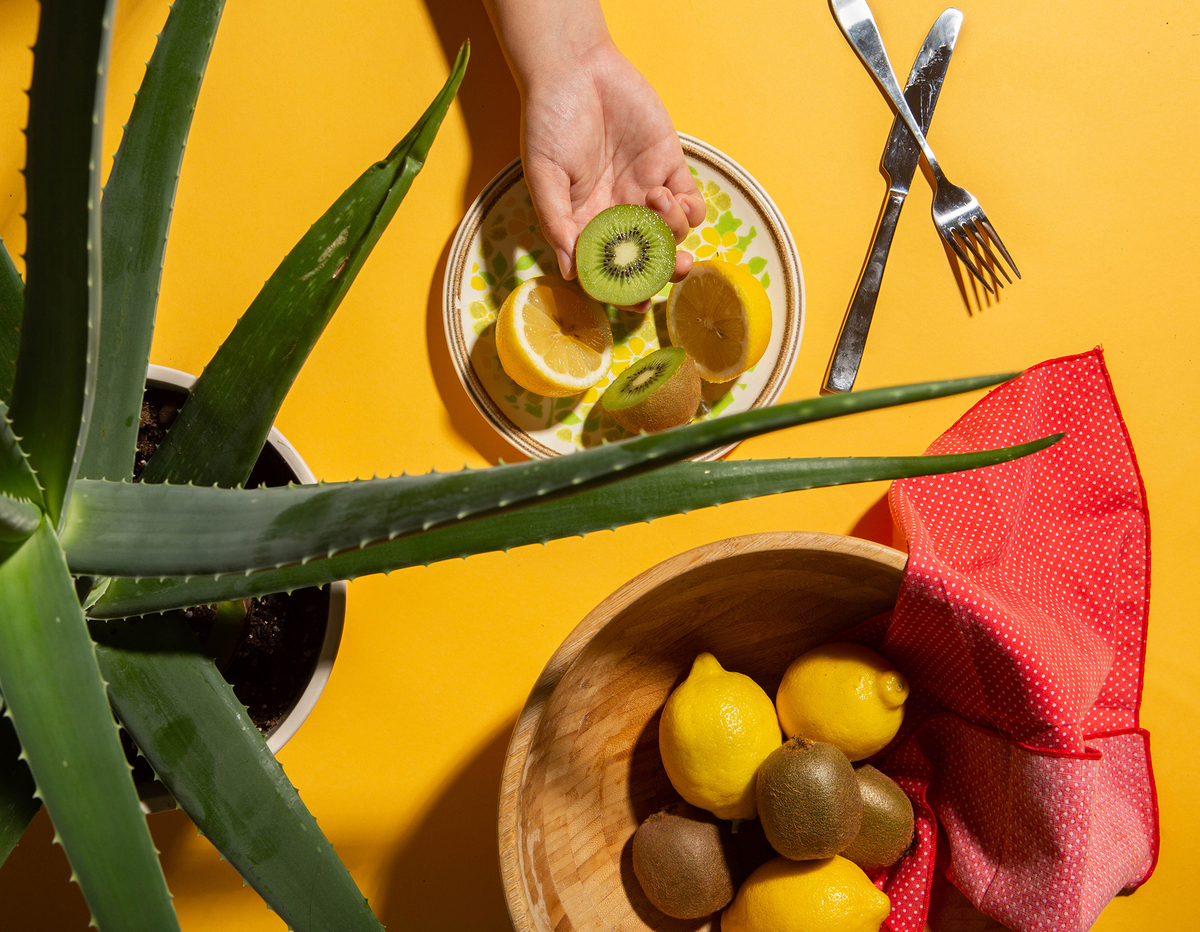 But kiwis, avocados and honeydew melons stay green. Wouldn’t that keep predators away, since green usually signals a fruit is not yet ripe? Preston and Osnas have a possible answer, at least where kiwis are concerned: In Chinese the fruits are called mihoutao, or “monkey peach,” for the monkeys that are their primary predators. Monkeys often eat fruit that is green, brown or yellowish-orange. Perhaps kiwis didn’t have to turn red or purple, so they didn’t bother. (That doesn’t quite explain green grapes and honeydew melons, however.)

One of the most common questions the botanists get: Why is okra slimy? “The slime is a mucilage” – a gummy secretion “that helps the plant store water in the hot places it likes to grow,” explains Preston.

Okra slime changes when its pH changes. To make okra less slimy, says Preston, cook it with an acid, which changes the properties of the molecules in the mucilage, and renders it far less viscous. Southerners cook okra with tomatoes, which provide plenty of acid. Some people, however, prefer okra in its slimier form.

“There are African recipes that add a base like baking soda, instead of an acid. The okra stew will be even more slimy,” says Preston.

Preston’s favorite recipe? “Brown the okra a little, then put in tomatoes, cinnamon and cayenne to play up the muskiness of okra. Cook until the tomatoes are completely reduced and most of the slime is gone.” Or, roll them in batter, which, like baking soda, is a base, and deep fry them fast and at high heat. “That has a tendency to maintain the slime,” she says, “so you bite into this crispy outside and get this juicy, slimy inside. People like the contrast.”

Preston and Osnas always come back to one simple and encompassing insight: All things sweet and savory, creamy and crunchy, florid and brilliant and juicy and sour, all the culinary delights of the plant world come from the relationship of plants to their predators, pollinators and caretakers. Without those relationships, they’d probably all just taste like chlorophyll.

“Many of the flavors we love come from compounds meant to protect a plant from rotting or being devoured too soon,” explains Preston. For instance, she notes, the heat of cayenne and mustards and radishes deters bugs. Antioxidants that help keep us healthy originated as plant defenses.

“In the end,” says Preston, “the ways plants taste and behave in our kitchens are inextricable from the whole of evolutionary history.”

Jill Neimark is an Atlanta-based writer whose work has been featured in Discover, Scientific American, Science, Nautilus, Aeon, Psychology Today and The New York Times.