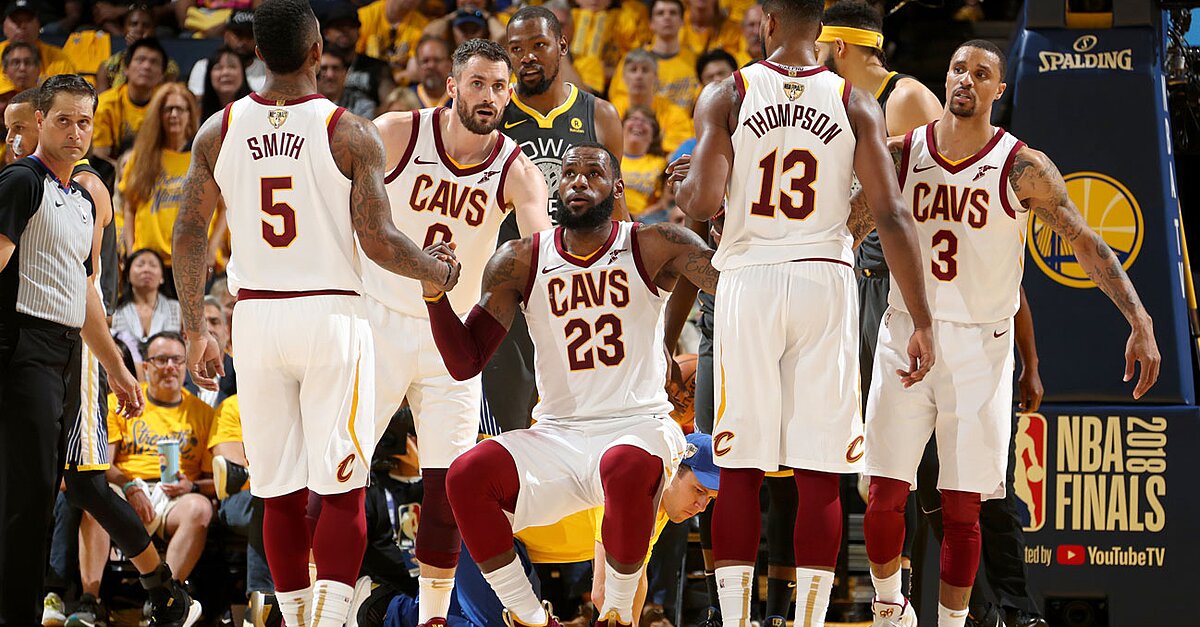 CLEVELAND — LeBron James had already admitted he that “didn’t like the mood” he was in Tuesday, as he stewed over an 0-2 Finals deficit for the third straight season. The four-time MVP had just dismissed the president of the United States as “laughable,” and he had just relived Cleveland’s excruciating Game 1 loss. Now he was being quizzed about his body language and leadership following J.R. Smith’s notorious blunder, and his patience was running thin.

Video footage had captured a stunned James sitting silently on the bench for minutes before overtime of Game 1, then losing his composure when coach Tyronn Lue confirmed that Cleveland had possessed an unused timeout. The scene was as demoralizing as it gets: James and Smith didn’t exchange a glance, much less a conversation, and the Cavaliers immediately conceded a 9-0 run once they returned to the court. Given Cleveland’s unadulterated shock and dismay, it’s a wonder Golden State didn’t open overtime on a 29-0 run.

The question was put to James: Should he have done more to rally the troops? Did his own momentary frustration contribute to Cleveland’s eventual defeat? With his basketball contemporaries no match for him, James is often compared to legends, royalty, and comic book heroes: Atlas, King James, and the Black Panther. But his incredulous response to the notion that he had let his team down was entirely human, not superhuman.

“I mean, we’re in the NBA Finals,” James said. “I mean, how much more picking up of teammates do you want me to do?”

He answered like an overworked employee who had clocked a 60-hour week, only to get hit with a weekend-ruining request at 4:50 p.m. on Friday. His tone sounded like a do-everything parent who handled the carpool, did the laundry, cleaned the house and was now being asked when dinner would be ready. Asked to dissect his immediate emotional reaction to a career night being spoiled by a trusted teammate’s unimaginable mistake, James replied with the most primitive and universal lament: What more can I do?

Tucked into James’s rhetorical question was a cold, but accurate, appraisal of his Cavaliers: It took a run of minor miracles for them to even make it to the Finals, and James was the driving force, often the sole force, behind the miracles. His buzzer-beater from deep against Indiana. His one-legged kiss against Toronto. Eight 40-point games and three triple doubles this postseason. Two Game 7 victories. Forty-eight minutes against Boston. Fifty-one points in Game 1 against Golden State.

As Cleveland enters Game 3 at Quicken Loans Arena on Wednesday, the balance of this series will be determined by whether James can pull Cleveland through yet again. Indeed, looking back at Game 3 from the past two Finals helps explain why the burden falls on James’s shoulders more than ever.

In 2016, the Cavaliers began digging out of an 0-2 hole with a 120-90 blowout win in Game 3. That victory saw 30 points from Kyrie Irving, who is now in Boston, and five three-pointers from Smith, who has spent the last two weeks in a shooting funk. James had 32 points, 11 rebounds and six assists that night, but he had plenty of help too.

Last year, the Cavaliers got 39 from James, 38 from Irving, five three-pointers from Smith, and yet they still lost at home to the Warriors. Kevin Durant buried a Rucker Park-esque pull-up three in transition and Golden State never looked back, winning the series in five.

James has less help and he’s facing a more tested opponent this year: the mountain is steeper, and the weather conditions are less forgiving. Understandably, he had no interest in drawing parallels between his past Game 3s and his current predicament.

“I don’t know how I felt last year or the year before that,” James said. “I’m not quite sure. I know it feels like we’re down 2-0, and I don’t like the way I feel. There’s no, like, OK, you’re down 2-0 and you feel better than when you were down 2-0 before. When you’re down like this, in a deficit like this versus a team like this, there’s no good feeling. I don’t feel good about it.”

Cleveland has received solid contributions from Kevin Love in this series, and conventional wisdom suggests that its role players will shoot better and exhibit greater confidence at home. But there’s only so much James can expect from this cast, especially as the Warriors’ defense continues to lock into the Cavaliers’ preferred habits.

“It’s hard because they switch out on everything,” Lue said. “So all the actions you run for Kyle, they just switch out to deny and take him away. When they are helping on LeBron’s penetration, the one guy they’re staying at home on is Kyle. They’re not leaving his body. We try to run a lot of actions for him, but they’re just switching out and taking it away.”

Lue said he plans to reinsert Rodney Hood into the rotation for Game 3, but this is the same Hood who hasn’t scored 20 points since before the All-Star break and who was relegated to the bench halfway through the Eastern Conference finals. While a breakthrough performance from Hood would be welcomed with open arms, he can’t reasonably be expected to pick up where Irving left off in 2017 or to match Smith’s sharpshooting from years past.

If the Cavaliers’ postseason run has revealed anything, it’s that the more challenging their situation gets, the more they lean on James. For this to become a real series, James is left with no choice: He must “pick up his teammates” once again.