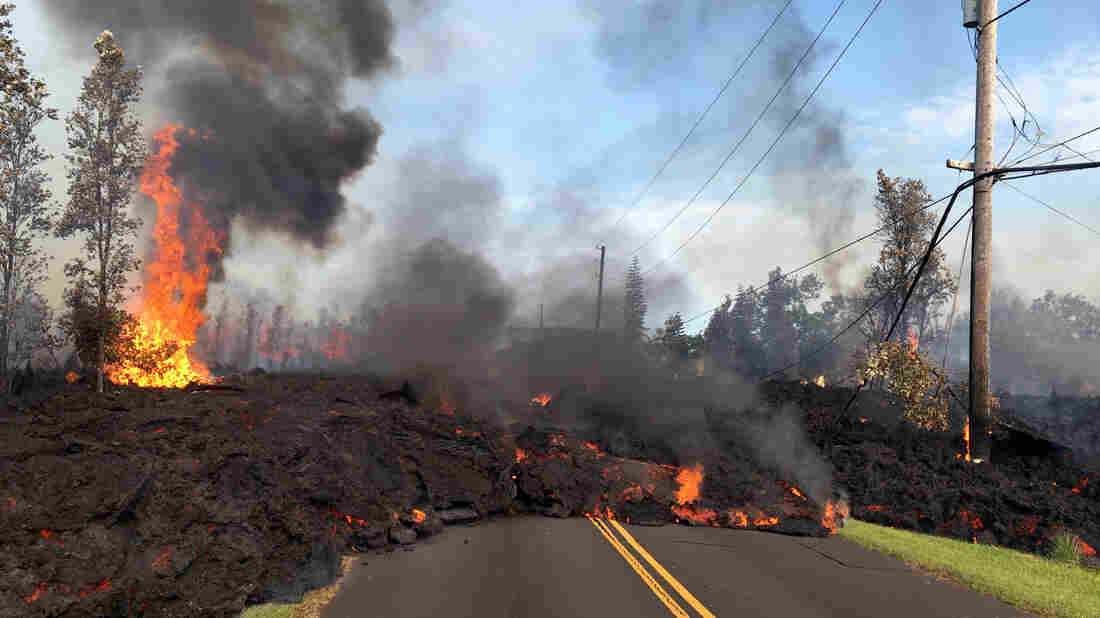 In this handout photo provided by the U.S. Geological Survey, lava from a fissure slowly rolls down the street on Saturday in the Leilani Estates subdivision near Pahoa, Hawaii after the eruption of the Kilauea volcano last week. Handout/Getty Images hide caption 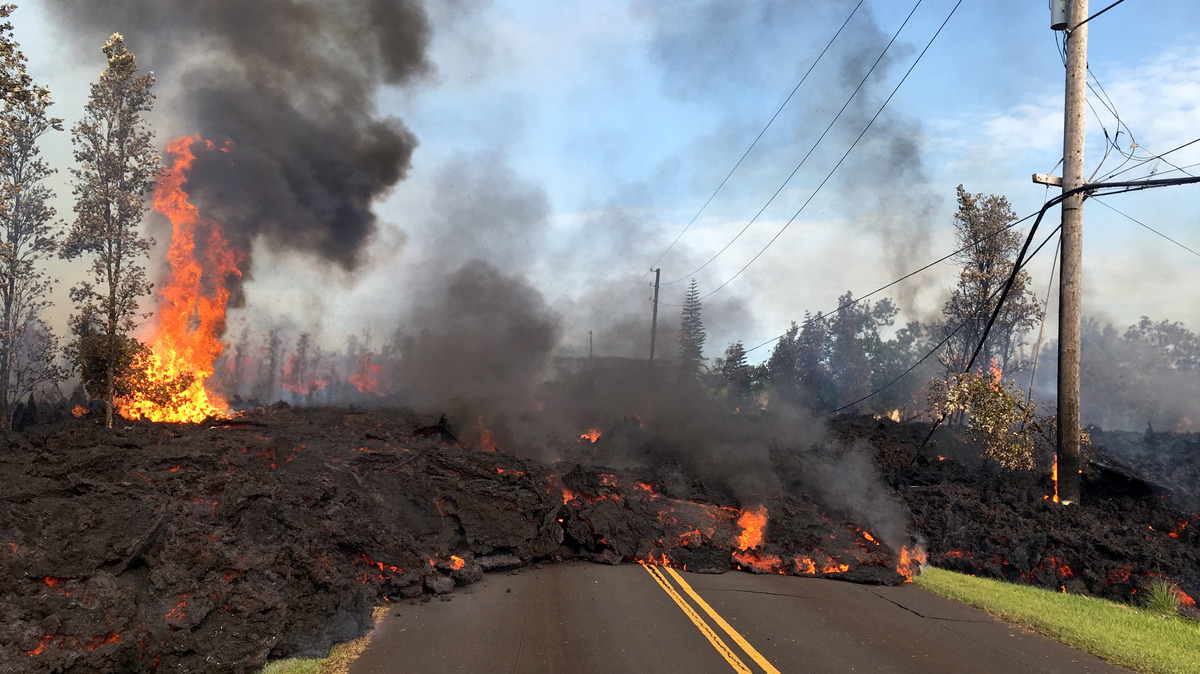 In this handout photo provided by the U.S. Geological Survey, lava from a fissure slowly rolls down the street on Saturday in the Leilani Estates subdivision near Pahoa, Hawaii after the eruption of the Kilauea volcano last week.

Lava continued to spew out of cracks in the ground early Sunday after the eruption of Hawaii’s Kilauea volcano destroyed at least five homes and forced the evacuation of more than 1,700 people last week.

The Hawaiian Volcanoes Observatory says eight volcanic vents, each several hundred yards long, have opened since the initial eruption of Hawaii’s most active volcano Thursday. In the early morning hours on Sunday, lava shot up 230 feet in the air from one fissure in a section of the rural Puna district on Hawaii’s Big Island.

Several small earthquakes also continue to rock the area since a 6.9 magnitude temblor hit on Friday, which Reuters reports was the strongest since 1975. Geologists say that magma rolling through Kilauea triggered the earthquakes, which could continue over the next few months.

More than 1,700 residents have evacuated from the communities of Leilani Estates and Lanipuna Gardens and are coping with the fact that they may not be able to return home for a while.

“I have no idea how soon we can get back,” Leilani Estates resident Todd Corrigan told the AP. He and his wife fled their home after lava exploded from the ground a few blocks away.

Scientists cautioned that new vents could open up, but they are unable to predict exactly where the ground could split. The Centers for Disease Control and Prevention also warns that sulfur dioxide gas released from the fissures could be life-threatening in large quantities.

“Those remaining in Leilani and Lanipuna Gardens and along Pohoiki Road need to prepare to leave because if the winds change, you could be gassed,” Hawaii County Council member Eileen O’Hara said in a Facebook post.

State officials told Reuters the disaster hasn’t impacted flights or tourist spots on the island, which are far from the area where lava continues to burst from cracks in the ground. The Hawaii County Civil Defense Agency released a public map outlining the affected areas and issued an emergency water restriction order for the Leilani Estates subdivision.

The agency also warned that continued bursts of lava could reach up to 2,100 degrees Fahrenheit. An administrator for the agency told CBS News that experts don’t know how long volcanic activity will continue.

“That’s the sad part about it,” administrator Talmadge Magno said. “It could be happening for a long time, or on the other hand, like I said, mysteriously it could just end.”

Area residents have dealt with eruptions of the Kilauea volcano since 1983, according to the AP. In 2014, lava torched a house and blanketed a cemetery near Leilani Estates, and almost 30 years ago, the entire town of Kalapana was slowly buried in lava over a year.