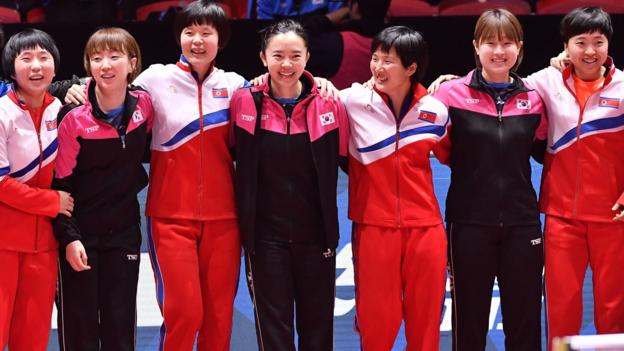 Sport continues to build bridges in North and South Korea, almost three months since the so-called ‘Peace Olympics’ were held in the South.

Just days after leaders of the two countries pledged to rid the Korean peninsula of nuclear weapons, the two nations have unified in the table tennis hall – rather than compete against each other amid a backdrop of inter-Korean reconciliation.

The two countries – who are technically still at war – were due to meet in the quarter-finals of the World Team Table Tennis Championships in Halmstad, Sweden but decided to instead lay down their bats and shake hands in order to form a unified team.

Incredibly – and perhaps for the first time in sporting competition – the tournament’s organisers agreed the two teams could merge, and they will now face either Japan or Ukraine in the final four on Friday.

It is not, however, the first time the two nations have competed as one. In February, they fielded a unified women’s ice hockey team at the Winter Olympics in Pyeongchang.

Referring to Thursday’s sporting move, International Table Tennis Federation president Thomas Weikert said: “When I informed the board of directors about this development, the unified team received a standing ovation from the delegates who showed their sign of support for this historic move.”

It follows the significant meeting between the North’s leader Kim Jong-un and South Korea’s Moon Jae-in last week where the leaders agreed to work towards “lasting peace”.