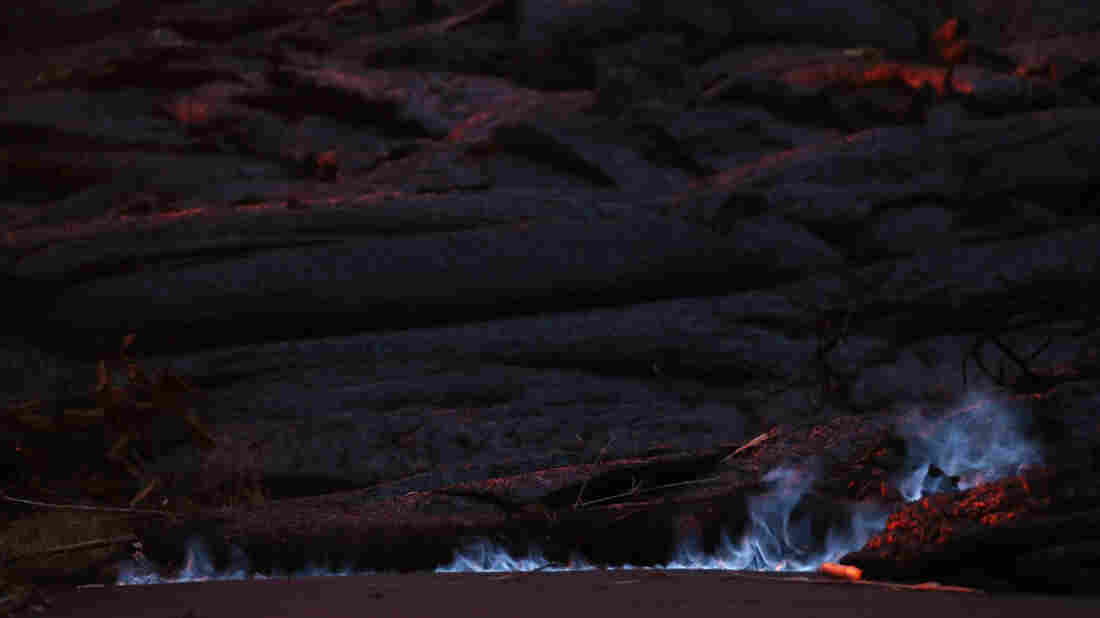 Blue flames of methane gas escape from a crack near a volcanic fissure from Kilauea in Leilani Estates, on Hawaii’s Big Island, on Wednesday. Mario Tama/Getty Images hide caption 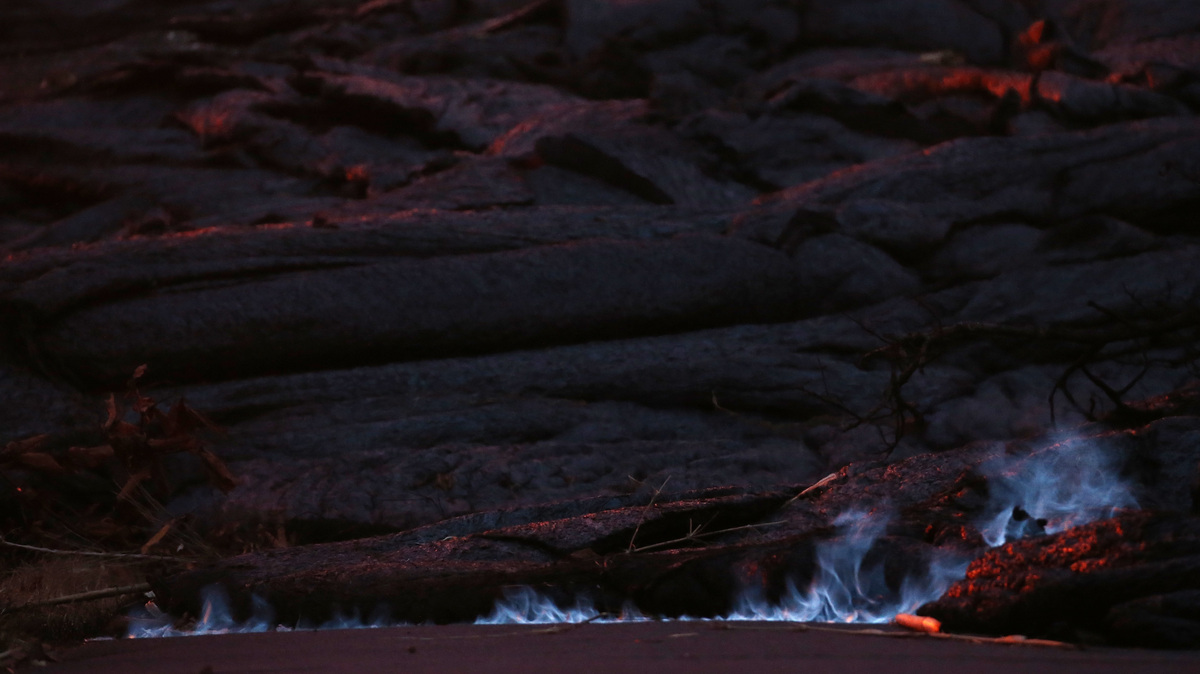 Blue flames of methane gas escape from a crack near a volcanic fissure from Kilauea in Leilani Estates, on Hawaii’s Big Island, on Wednesday.

Ballistic blocks, earthquakes and ocean plumes: in the three weeks since Hawaii’s Kilauea volcano began erupting it has produced some awe-inspiring — and dangerous — phenomena.

Now another wonder has emerged from the ground: blue flames created by burning methane lapping up from pavement cracks.

The U.S. Geological Survey posted video of the flames on Kahukai Street in the Leilani Estates subdivision, which was ordered evacuate in early May.

As the lava burns up vegetation in its path, it can create the flammable gas, USGS explains, which then seeps into underground apertures, rising from cracks and burning blue once ignited.

The methane can also cause explosions if it ignites after building up underground, capable of tossing blocks several feet, The Associated Press reports.

But Hawaii County Civil Defense says another hazard has been averted for now.

Earlier in the week, approaching lava had come within hair-raising proximity of the Puna Geothermal Venture, an important source of power on Hawaii Island, spurring officials to warn of the potential release of a deadly gas.

But on Wednesday evening, the Civil Defense agency announced that the situation at the energy plant “remains stable, lava has not encroached further onto PGV property.”

The AP reports the encroaching lava had actually helped: it had cooled and hardened, creating a wall preventing more molten rock from flowing toward the plant.

Officials also said that crews had remained on the scene monitoring for gas releases and had detected no sign of hydrogen sulfide, a flammable and extremely dangerous gas.

Meantime, Kilauea’s summit has continued to send up frequent ash emissions, with one plume rising more than a mile into the sky Wednesday, reports USGS.

Kilauea Message Thu, 24 May 2018 05:59:13 GMT: A small explosion from overlook crater at 6:44 p.m. produced an ash cloud that reached about 7000 ft above sea level as determined by National Weather Service radar. The cloud did not contain much ash and cleared quickly.

The ash moves with the wind. Free masks are available to residents, up to three per person, to protect against breathing in the ash.

Masks do not, however, provide against gasses and vapors.

Officials have been warning of “laze,” a toxic plume created as lava makes contact with water. The combination of hot lava and cool water from the Pacific Ocean can send steam containing glass particles and hydrochloric acid airborne.

The lava’s ocean entry is also creating the potential for another hazard: delta collapses. The USGS says the newly formed land at the water’s edge is unstable, and acres of delta can plunge into the water without warning. “When this happens, it can trigger explosions that hurl rocks hundreds of meters [yards], both inland and seaward, and send huge waves of scalding water onto the coastline.”

NPR’s Nathan Rott reports from Pahoa, Hawaii, the volcano has so far sent more than a thousand residents fleeing from their homes.

Although some residents, like Debbie Smith, are opting to stay put, at least for the time being. Smith tells NPR her home is safe for now, and yet it is close enough that her bedroom glows orange at nighttime.

Nathan reports the volcano has destroyed at least 44 homes and buildings.

One person has suffered a serious leg injury from flying lava spatter.

Despite the seemingly steady stream of hazards, officials in a state that relies heavily on tourism are reiterating a message: “Travel is safe to the Hawaiian islands.”

“The experts are telling us there is no danger from the eruptions to anyone outside the areas that have been evacuated,” Gov. David Ige said in a statement. “Air quality is being closely studied and is of most concern in the immediate area inside where the volcanic activity is taking place.” 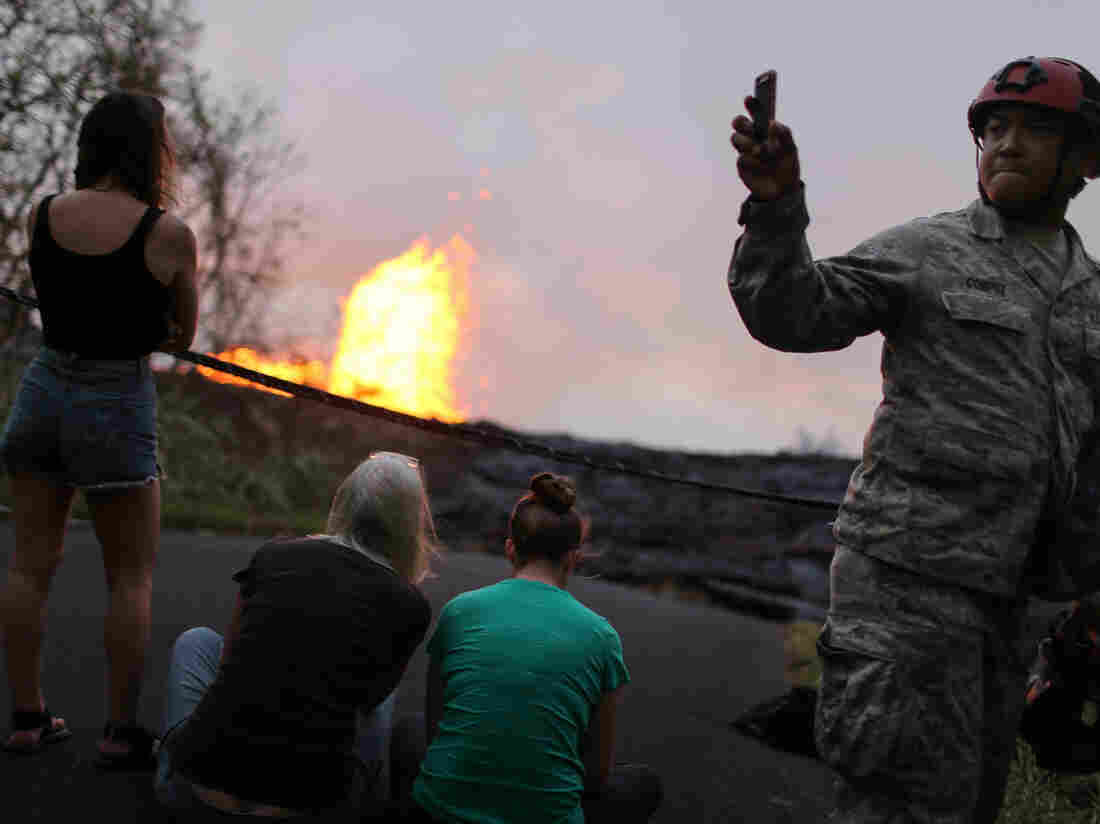 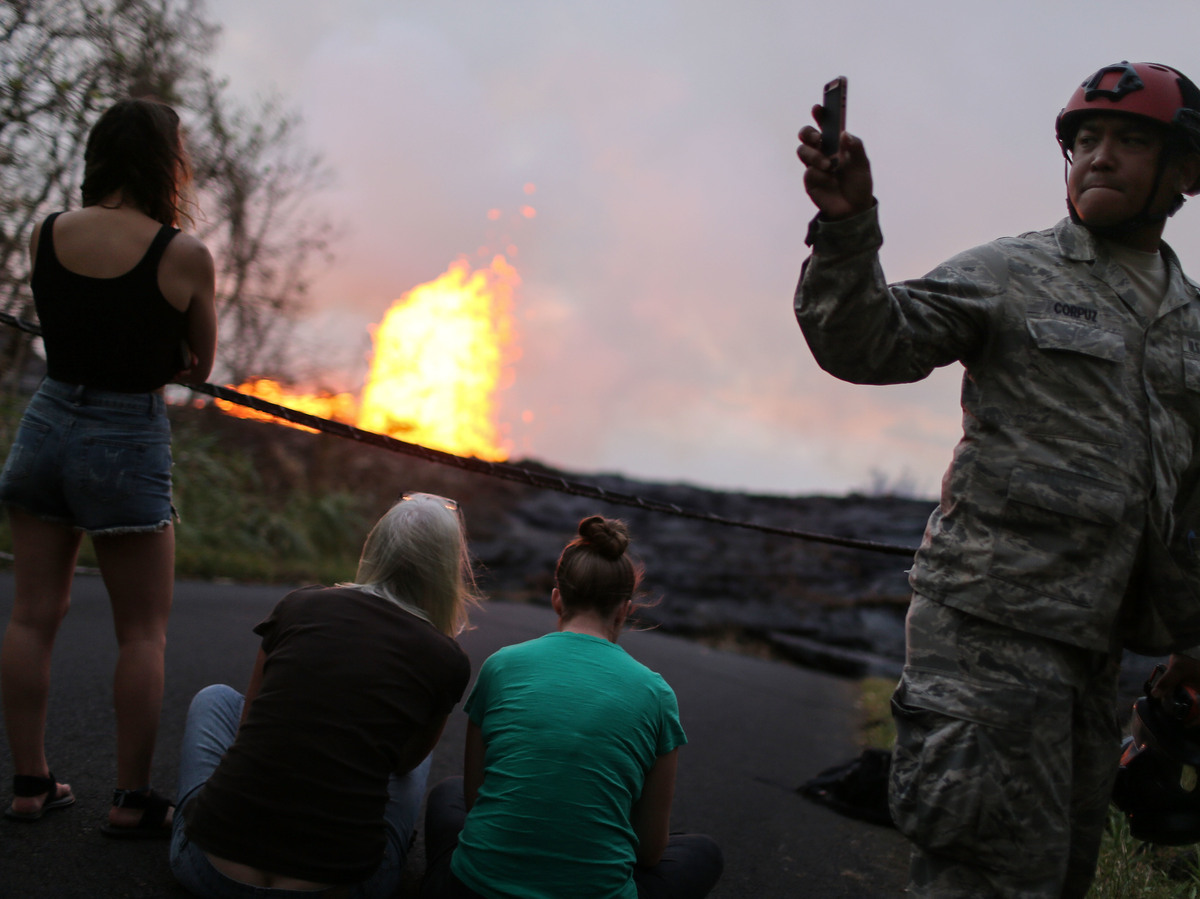 A U.S. National Guard soldier takes photos as lava erupts and flows from a Kilauea volcanic fissure in Leilani Estates, on Hawaii’s Big Island, on Wednesday.

Ige notes that the volcanic activity is having “no effects whatsoever” on the five other Hawaiian islands. Even on the Big Island, home of Kilauea, Ige says “the one area that people need to avoid is lower Puna where the eruption is ongoing.”

And with scientists unable to say when the eruption will end, many nearby residents simply must contend with uncertainty about their future.

In Pahoa, just a few miles away from the lava flow, Nathan came across Robert Carton, who was was seeking information about his father’s home, which was evacuated weeks ago and may very well be lost.

“He’s kind of accepted it already,” Carton says. “So he’s just waiting to get the word so he can move on.”