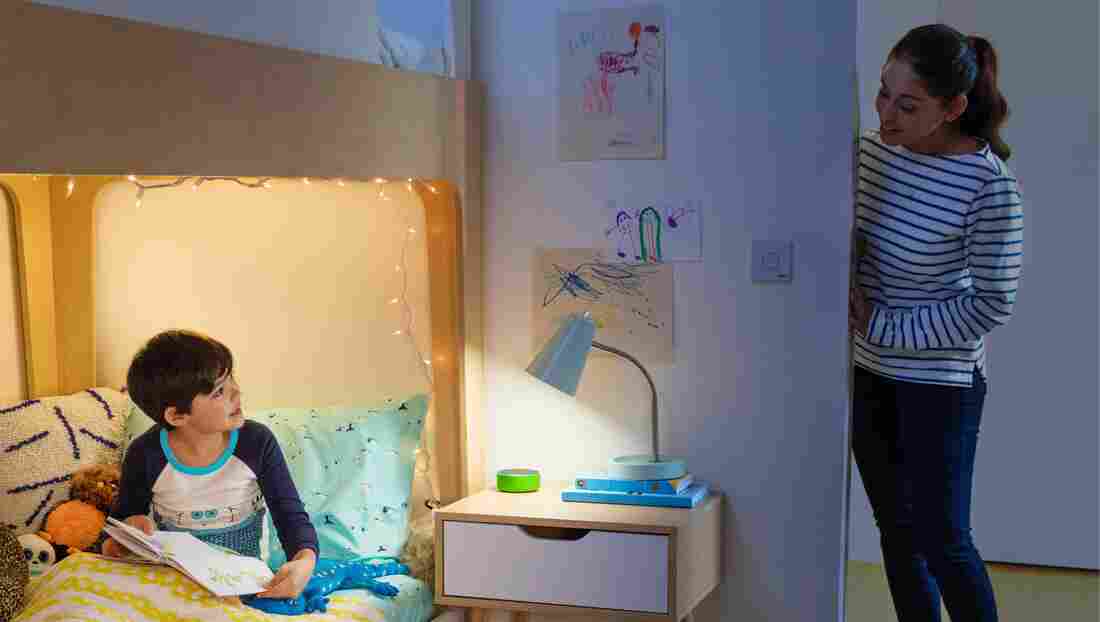 The new Amazon Echo Dot For Kids is that little green thing on the bedside table. Amazon hide caption 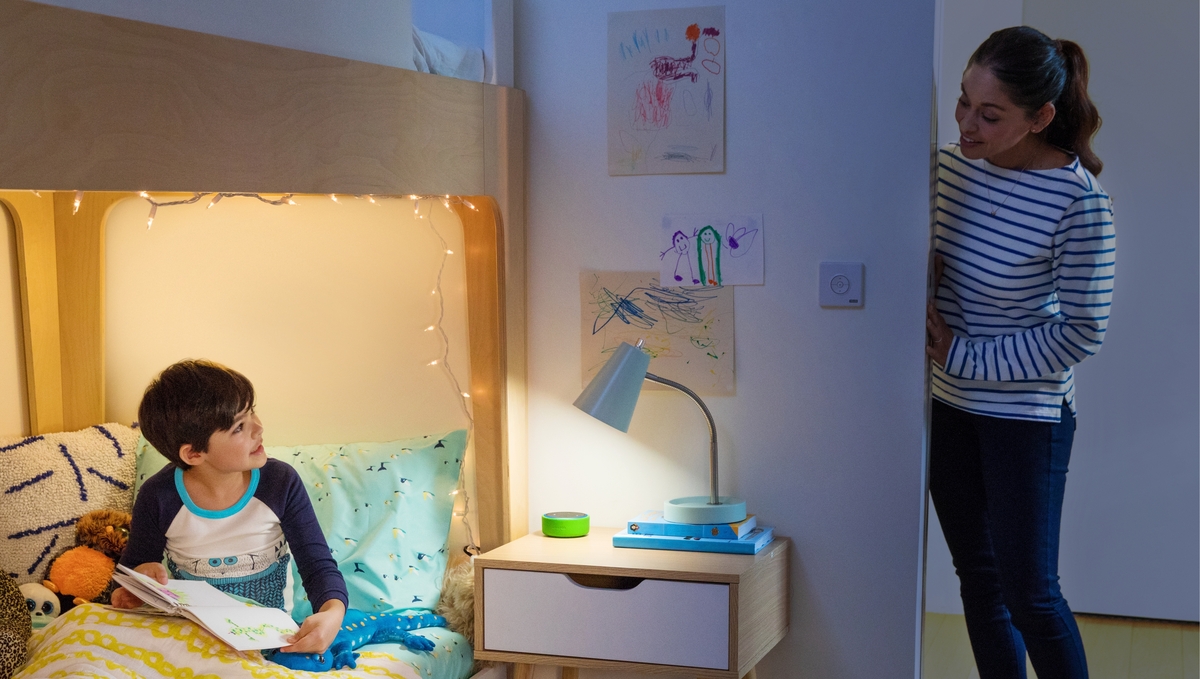 The new Amazon Echo Dot For Kids is that little green thing on the bedside table.

Families who have an artificially intelligent “smart speaker” at home like Amazon’s Echo may be used to kids saying stuff like this. And Amazon (which is a financial supporter of NPR) has just announced that Alexa’s going to get better at answering them.

(*Except that last one. Alexa’s reply: “People make people, but how they’re made would be a better question for a grownup.”)

Last week, the company unveiled a new version of its Echo home device with a spill-proof case and a warranty. Amazon is also introducing parental controls, including time limits, for the Echo for the first time. Google Home, its biggest competitor, already has some.

And, the Echo is adding a version of Amazon’s kids’ music, stories and games service, called FreeTime Unlimited, for $2.99 a month. Finally, they have “tuned” Alexa’s “personality,” with the help of child-development experts, to be more kid-friendly, and even to understand kids’ voices better, like if they say “Awexa” instead of “Alexa”.

Toni Reid, vice-president of Alexa Customer Experience at Amazon, says that all this is a reaction to customer interest. They’ve been “excited and a little bit surprised” to see how much kids liked hanging with Alexa.

Justine Cassell isn’t surprised by this at all. She’s associate dean for technology strategy and impact of the school of computer science at Carnegie Mellon University, and has been building AI interfaces for children for decades. She describes the appeal of these conversational interfaces as like being “the Mary Poppins of technology.” “Ever patient, always on, never with her door closed, always ready for yet another game, always willing … to answer yet another question.”

The updated Alexa is a little chattier than before, with longer explanations, more corny jokes and fun facts. It’s also designed to model good behavior. The “magic word” feature offers positive reinforcement: When you say “Please,” it replies “thanks for asking so nicely.” If you tell Alexa you’re sad, it will “empathize,” and suggest it can play you a song, or that you should talk to a friend. Reid describes Alexa’s personality as “humble, smart, helpful, sometimes funny.”

What this all adds up to is hard to predict. Amazon seems to be nudging families to feel comfortable around Alexa — to put an Echo in the playroom, or even in a kid’s bedroom, as shown in a company promotional video. But is that really the best idea?

Cassell says her research shows that interacting with AI “is endlessly interesting to children in different ways at different ages. And there hasn’t been a lot of talk about how this is going to be used developmentally, and I think we really need to put it a lot more effort into that.”

Pamela Pavliscak agrees. She’s a futurist and a professor at Pratt Institute who focuses on our emotional relationships with technology. In her research she’s found kids and teens already often see Alexa “as a friend of the family.”

“It’s occupying that weird space between a friend, a human friend, and something else. And I think for kids especially, their conception of that is so fluid.”

Up to now, Pavliscak notes, some families have found smart speakers more wholesome and engaging than devices with screens. Instead of interrupting your conversation with your kids to look at a phone, you can call out “Alexa, what’s the weather?” and everyone hears the answer at the same time.

But, some of the FreeTime Unlimited subscription offerings, like trivia games and audiobooks, offer kids the opportunity to engage with the device solo for longer periods of time. And, Pavliscak says, “They might use that as a replacement for other kinds of relationships that might be more meaningful.”

And, let’s not forget that all these chummy conversations are recorded by default, which raises both privacy and marketing concerns. Amazon says it won’t use that information to recommend products — outside of the existing library in its subscription service. And there are no ads on Alexa. At least, not yet.

Our kids might relate to Alexa like a trusted friend, but let’s not forget, says Pavliscak, “They’re communicating with a big retailer through an app that’s been made by hundreds of people on the other end.”

Cassell raises a different concern. What she finds “creepy” about Alexa is the parental controls: The power it gives parents to listen to their kids’ conversations, while limiting what they hear or do. “With our children we walk a fine line between loving care and abuse of power. And healthy development means staying on the right side of that line.“

When it comes to the future of home AI, as with other technologies, Cassell says she puts her faith in children. She cites a video on YouTube of what looks like a very young boy demonstrating how to hack Amazon’s parental controls. (Here’s a similar one). This kind of rule-breaking, she says, is an expression of creativity — wanting to get under the hood and muck around with the tech.

“What children need most is to be able to be producers of technology as well as consumers of content. Because what we all need … is not to listen but to be heard. And if Alexa learns how to hear, and I suspect that children are going to try and make it so, then it will be a success.“