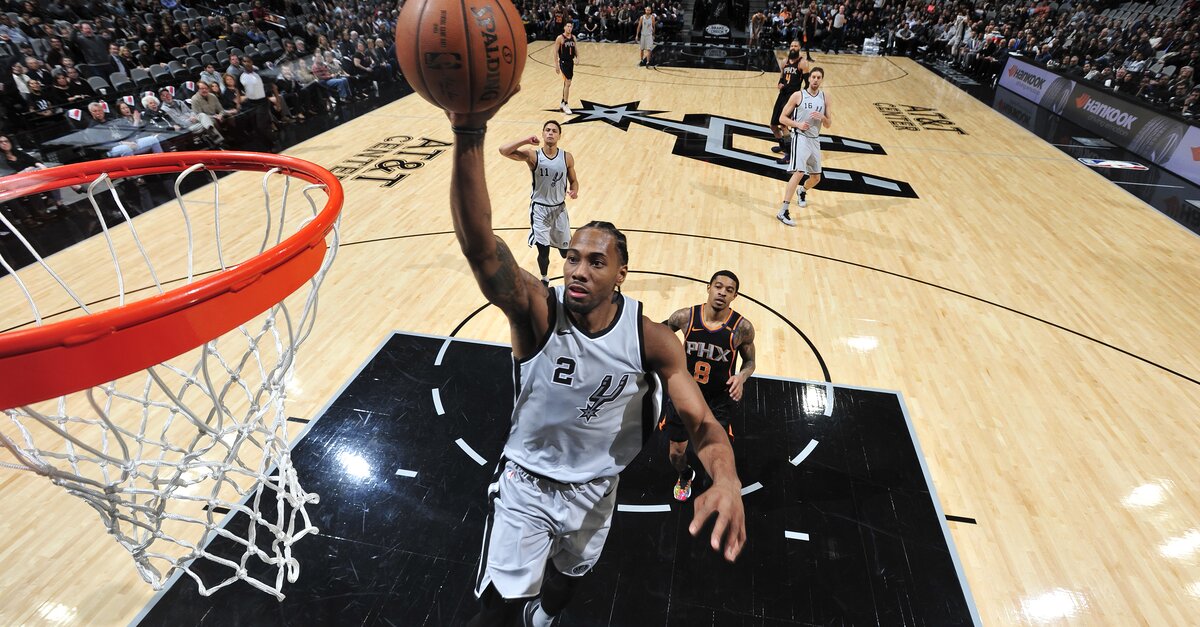 On Friday afternoon several journalists reported that Kawhi Leonard would like to be traded from the Spurs, and now the NBA offseason is real. After a year of mysterious injuries, conflicting rehab timelines, sniping from teammates, and general weirdness that reached a fever pitch when Leonard was nowhere to be seen during the Spurs first round playoff series, the Kawhi era in San Antonio will likely come to a close within the next two weeks.

Here are six thoughts as we process the news.

1. Kawhi Leonard at his peak is absolutely incredible. It can’t be overstated. He’s in an entirely different tier than stars like Kyrie Irving, Jimmy Butler, or Paul George. When Kawhi is healthy, he’s a perennial MVP candidate and generally a good bet to land somewhere in top three for defensive player of the year. We throw around “top 10” or “top 15” to describe at least 20 different players in the NBA, but Healthy Kawhi is safely top five.

His offense has become every bit as lethal as defense over the past few years, and during the last full season he played in San Antonio, he’s grew into perhaps the most reliable isolation scorer in basketball. So, yeah: Kawhi is probably the most dominant player to hit the trade market since Kevin Garnett 10 years ago. This is a big deal.

2. Trading for Kawhi is scarier than it should be. Teams trading for him will have no idea exactly how healthy he is or how healthy he may be for the rest of his career. He’s struggled with nagging injuries at various points along the way in San Antonio, and this absence this past season was dramatic enough to give anyone pause. Per a May 1st report from ESPN and Ramona Shelburne, multiple specialists have disagreed as to what the injury actually is. The Spurs believed it was a deep bone contusion, while Leonard’s camp—namely, his agent and his uncle and separate doctors he’s consulted with in New York—contends that “the issue has more to do with an ossification, or hardening, in the area where the muscle has been repeatedly bruised, and then an atrophy, which in turn affected the tendons connecting the muscle to the knee.”

In any case, Leonard didn’t look like the same player in the few games he did play this season, and the nature of the injury will prompt any teams trading for him to issue an exhaustive physical in the process. And even then, there may not be 100 percent certainty regarding his health going forward.

3. The Lakers are the rumored favorite. Here we go.

This was always going to be a monumental summer for the Lakers—the only question was whether it would be triumphant or deeply embarrassing. And now it looks we’re heading toward the former. Adding Kawhi would immediately put L.A. at the front of the line for every other free agent on the market, including LeBron James. I have no idea what prompted this tweet from owner Jeanie Buss earlier in the week, but I like to think it came after an intimate night of dinner and tampering with Kawhi’s uncle.

4. The Lakers have the best trade package for Kawhi. Aside from the inevitable “Kawhi Leonard wants a bigger market and grew up in California” dot-connecting, the most compelling reason to believe in the Lakers here is that L.A. can offer the best trade package on the market. They can include Kyle Kuzma, a player the Spurs reportedly coveted in last June’s draft, Josh Hart, another over-achieving from last season, future first round picks, and most notably, L.A. could include Brandon Ingram or Lonzo Ball, or possibly both. Ingram and Ball both have varying degrees of superstar potential, and Ingram, in particular, would provide San Antonio with a building block to help anchor the next generation of Spurs teams.

5. The Sixers will likely make some calls as well, but unless Ben Simmons is on the table, they don’t have any player who compares to Ingram or even Lonzo. Markelle Fultz has too many question marks, the 10th pick is probably not valuable enough, and while Dario Saric would be a delightful addition to the Spurs family, he’s not a star who could anchor the next era. Even bundled together, those assets may not match a deal for one of L.A.’s building blocks.

The Kings are reportedly interested in shopping the number two pick and could enter the fray themselves. What if Luka Doncic ends up in San Antonio? Then again, it’s unlikely that Kawhi would re-sign with a rebuilding Sacramento team when he hits free agency next summer, so this would be a massive risk for the Kings.

That Kings worry is what complicates the market for everyone: with only a year left before free agency, next summer Kawhi has the ability to leave any situation that he finds undesirable. That means he can dictate terms over the next few weeks, and if he sincerely wants to be in L.A., he can make it happen. Of course…

6. The Celtics could get involved. Because the Celtics can always get involved. According to Adrian Wojnarowski and ESPN, Boston made an offer for Kawhi prior to the trade deadline in February. The Spurs elected not to counter at the time.

It’s a good bet the Celtics still have some interest—Danny Ainge always has interest—but the calculus has likely changed since February. The presumed centerpieces of any Kawhi deal now have significantly more value. Jayson Tatum went from “impressive rookie” to “potential superstar” over the final few months of the season, while Jaylen Brown looks like he’d be overqualified to be the fifth starter on next year’s team—and far more afforable than Leonard, who will be due a max extension next summer.

If the Celtics decide they want to go all in for next year’s title and enter the fray with Kawhi, they can do it. Tatum, Brown, and even potentially Hayward or Kyrie would be enough to get San Antonio’s attention and could put talks with the Lakers on hold. But Ainge would be shaking up a foundation that already looks better than anyone in the East for the foreseeable future, so Boston would be risking significantly more than the Lakers, who won 35 games last year. Likewise, there’s still the matter of inspecting Kawhi’s injury and convincing him that he’d be better off signing long-term in Boston than he would be in Los Angeles. While the promise of a 60-win season probably helps the cause, it may not be enough to dissuade Kawhi from going home, especially if LeBron is headed West as well.

7. Whatever happens, the NBA offseason began in earnest on Friday afternoon. How does this trade request affect LeBron’s decision? What about Paul George? If L.A. can land Leonard, could the Lakers be planning an additional trade for a third superstar? How much of this will be decided before next week’s draft? And where does leave the Spurs, the most successful franchise of the past 20 years?

It was just a few days ago when news broke that Gregg Popovich planned to sit down with Leonard to clear the air and attempt to repair the relationship that seemed to unravel this season in San Antonio. Whether that meeting happened or not, a solution for both sides never came. Now things get interesting.