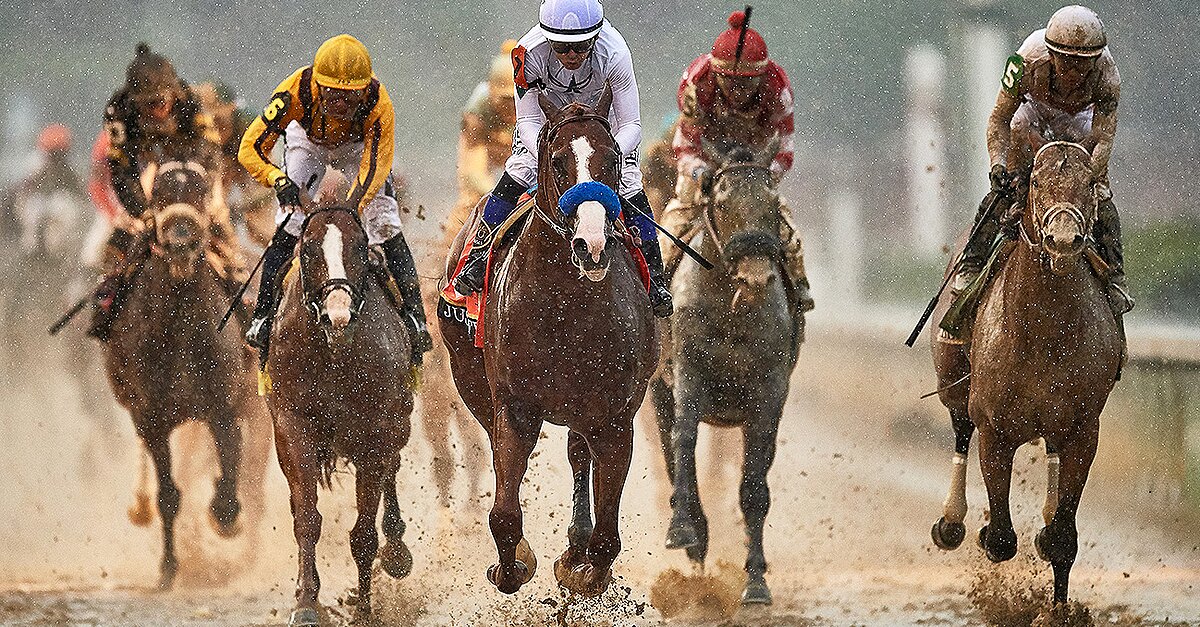 LOUISVILLE – It has been only three years, so it all seemed familiar. It was sunny on the first Saturday in May of 2015 and soaking wet on Saturday, as grey skies cried rain from lunch until dinner and deep into the night. The winning horse came from behind in the homestretch on that day, and on Saturday took the lead much sooner. Racing was desperate for greatness then, yearning for a horse to call its own instead of relying on the musty pages of history; now it has tasted excellence and only wants more. But these are just the small details in the painting. The broad, breathtaking strokes are much the same, another masterpiece, an encore in the mud. That one for then, this one for now.

In the gloaming of a dreary spring evening, with heavy raindrops bouncing off his coat, a three-year-old coat named Justify ran past the ancient twin spires at Churchill Downs and beneath the finish wire to win the 144th running of the Kentucky Derby. He won the most important horse race in America in only the fourth start of his life, just 76 days after his first race, a stunning feat of precocity. He took down a curse that had haunted the Derby for 136 years, which mandated that a colt could not win if he had not raced as a two-year-old. He ran fast from the start and kept on going. And when it was finished, his trainer, a familiar white-haired man in shades, even in the rain, connected the recent past to the present.

Pharoah is American Pharoah, the horse Baffert trained in 2015 to racing’s first Triple Crown in 37 years, an achievement that performed a public exorcism on the sport, shaking Belmont Park to its foundation on a June afternoon and sending decades of frustration into the sky. It was Pharoah who connected racing to its distant and holy past, writing his name in record books long left dormant.

Justify did not win a Triple Crown on Saturday. And given the litany of failures and near-misses that led to American Pharoah’s breakthrough, it is perilous to suggest that he will win one five weeks from now. That is a roll that should always be slowed. But his victory on Saturday carried the sweet, unmistakable scent of transcendence. And racing fans, always given to looking too quickly from Louisville to Baltimore to New York, will be forgiven for succumbing briefly again to temptation.

Justify won his Derby by chasing a fast pace, assuming the lead entering the final turn and then repelling an urgent challenge from Good Magic, last year’s two-year-old champion, a serious and respected racehorse who simply could not dent Justify’s margin in the long homestretch and at the finish seemed to be fading into the dusk. “I thought we had a good shot turning for home, given the fast fractions,” said Good Magic’s trainer, Chad Brown. “I thought Justify would come back to us. But hats off. He just kept going. He’s a super horse.”

Mike Smith, Justify’s unbreakable 52-year-old jockey—the second-oldest man to ride a Derby winner, after the legendary Bill Shoemaker, who was 54 when he won on Ferdinand in 1986—said, in a soft drawl from his New Mexico youth, “He’s so above-average.”

The victory for Baffert was the fifth of his career, second-most in Derby history, behind Ben Jones, who won six Derbies from 1938-52. He was humbled by the moment. “He is a great horse,” said Baffert. “To do what he did in that short a period of time… we saw something really great. That’s greatness right there.” Baffert has been the most successful big-race trainer in America for more than a decade, the only true two-legged celebrity in the sport. In the last three years he has trained not only American Pharoah, but also Arrogate, who won the Breeders’ Cup Classic in 2016, in the middle of one of the most dominant runs in recent racing history.

On Saturday as Baffert hustled toward the winner’s circle after the Derby, he put Justify in the same sentence with those two horses. “Him and Arrogate and American Pharoah,” Baffert said. “These are the three best horses I ever trained.”

The Justify story began at a sale of yearlings at the Keeneland Race Course in September of 2016. It is an annual sale where many future champions are purchased for princely sums by men, women and conglomerates taking a leap of faith on undeveloped animals. Justify is the offspring of a colt named Scat Daddy, who finished 18th in the 2007 Kentucky Derby for trainer Todd Pletcher, and who died the same year that Justify was born. The unnamed colt who is now Justify was bought by Winstar Farm, a Kentucky breeding and racing operation. (Winstar still owns a majority interest in Justify, but has since sold pieces of the horse to three other partners, including the vaguely mysterious and increasingly influential China Horse Club.)

Winstar racing director Elliott Walden sent Justify to Baffert last fall. (In one of those oddly symmetrical turns that is common in racing, Walden once trained a horse named Victory Gallop, who narrowly defeated Real Quiet in the 1998 Belmont Stakes, denying Baffert the Triple Crown.) Young horses develop at different paces and Justify came to Baffert too late to race as a two-year-old. No horse since Apollo in 1882 had won the Derby without racing as a two-year-old. But racing norms have changed. Horses race less frequently and often more precociously. “The curse will fall when there is a horse talented enough to do it,” said trainer Todd Pletcher before the Derby.

Justify’s first official work came during winter at Los Alamitos Race Track in Southern California. Baffert’s brother, Bill, was present for the session. “Bob said, ‘He’s a f—ing monster,’” recalled Bill after the Derby. Baffert decided to try to take down Apollo. Walden warned him not to push too hard. Baffert made a plan: A maiden race, an allowance race and then a Derby prep. He won the first on Feb. 18 and the second on March 11, both at Santa Anita. Baffert made a decision to send Justify to the April 14 Arkansas Derby at Oaklawn Park. That had been American Pharoah’s final prep race. Another Derby-bound three-year-old, McKinzie, was slated to run a week earlier in the Santa Anita Derby. But McKinzie got injured and Baffert, who does most of his work in California, made the decision to keep Justify at home. He won the Santa Anita Derby by three lengths, toying with a very good opponent named Bolt d’Oro. Derby game was on.

The next issue arose when Saturday’s predicted on-and-off showers turned to a steady daylong rain. Justify’s second win had come on a wet track in California, but the Derby day track was heaver and more demanding. Baffert fretted anew. “I quit worrying about the weather when he went under the wire,” he said.

He walked into the Derby paddock 50 minutes before post time. “This track is different,” he said. “It’s going to be tough on these horses. And it’s getting worse every minute.” As he talked, he was surrounded by his three grown sons from his first marriage and his 13-year-old son, Bode, with his wife Jill. They had all been with him in the paddock, in the sunshine, when American Pharoah won the Derby.

Still, he fretted the break. Baffert does not like to watch major races in the grandstand, or with owners. I asked him where he would watch for the Derby. “Somewhere where I can make a quick getaway,” he said, as rain pelted off the ground nearby. He settled on a horseman’s dining room off at the back of the paddock. Jill stood nearby in a green dress, a color that Baffert claims is unlucky and Jill insisted her husband gave her permission to wear. A craggy guy in shorts, a t-shirt and a grey ponytail shouted to Baffert, “It all comes down to the break. Right?” Everybody’s a trainer on Derby Day.

Smith, whose nickname is Big Money Mike, would later say, “My job was to just get him out of there. Once I did that, I just breathed a sigh of relief. The rest was up to him.”

Promises Fulfilled, a speedy sort of horse who had no choice but to hustle to the lead out of the No. 3 post position, went to the lead. Smith steered Justify just outside in a perfect stalking position, very similar to where Pharoah ran in his Derby. But the pace was exceptionally fast, 22.24 seconds for the first quarter-mile and 45.77 seconds for the half-mile. The quarter-mile time was the fifth-fastest in Derby history and the half was just outside the top 10. But then as Smith overhauled Promises Fulfilled, he also slowed the pace. Each successive quarter was slower than the one before it.

In the middle of the turn, Justify was challenged by Bolt d’Oro. Smith eased away. In the stretch it was Good Magic, winner of the Blue Grass Stakes prep race, who brought the final challenge. Jockey Jose Ortiz thought he had Justify measured. “My horse got rolling,” said Ortiz, “And I thought we had him. I was thinking, hopefully, he’ll get tired. But he didn’t.”

Baffert stood watching a bank of wall-mounted television screens surrounded by a pack of drenched journalists and track workers. When he saw the fast pace, he thought: Well, he better be good. When he saw Good Magic coming, he thought, That horse might get him. But then he knew it was over. “At about the eighth pole,” Baffert said. He threw both arms into the air and hugged his wife.

Out on the racetrack, in the downpour, Smith hit Justify six times with his whip, lefthanded, and then scrubbed on his mane through the lane. A roar was unleashed. “He could have gone around again,” said Smith. And then this: “There is no telling what this horse can do.’’

He will go around again. Two weeks henceforth and 600 miles east in Baltimore. And there will be plenty of telling, just maybe another story for the ages.