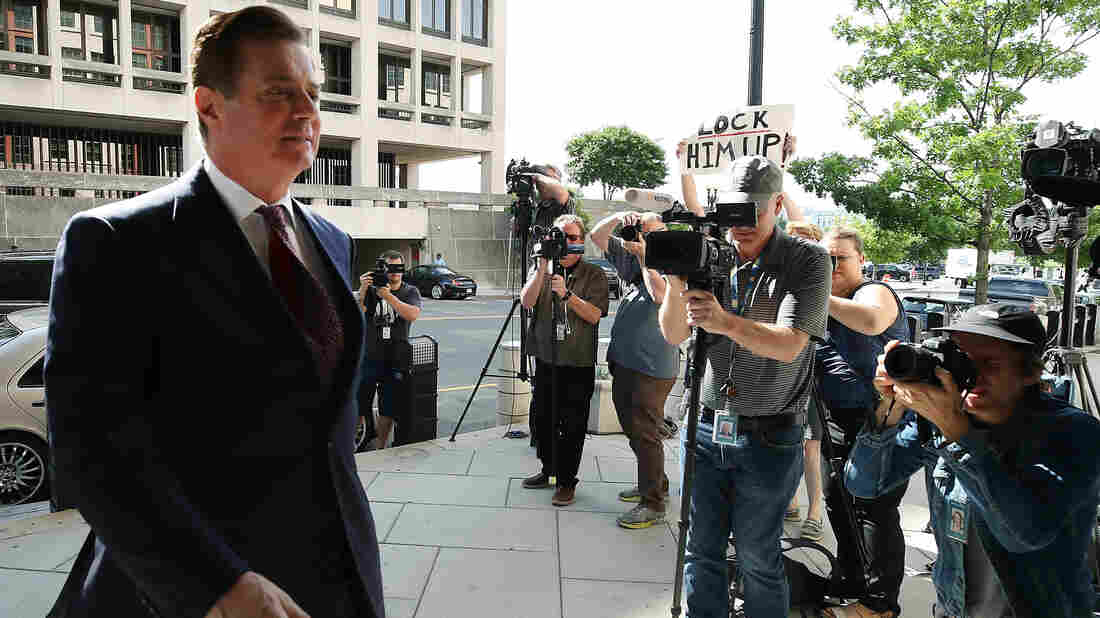 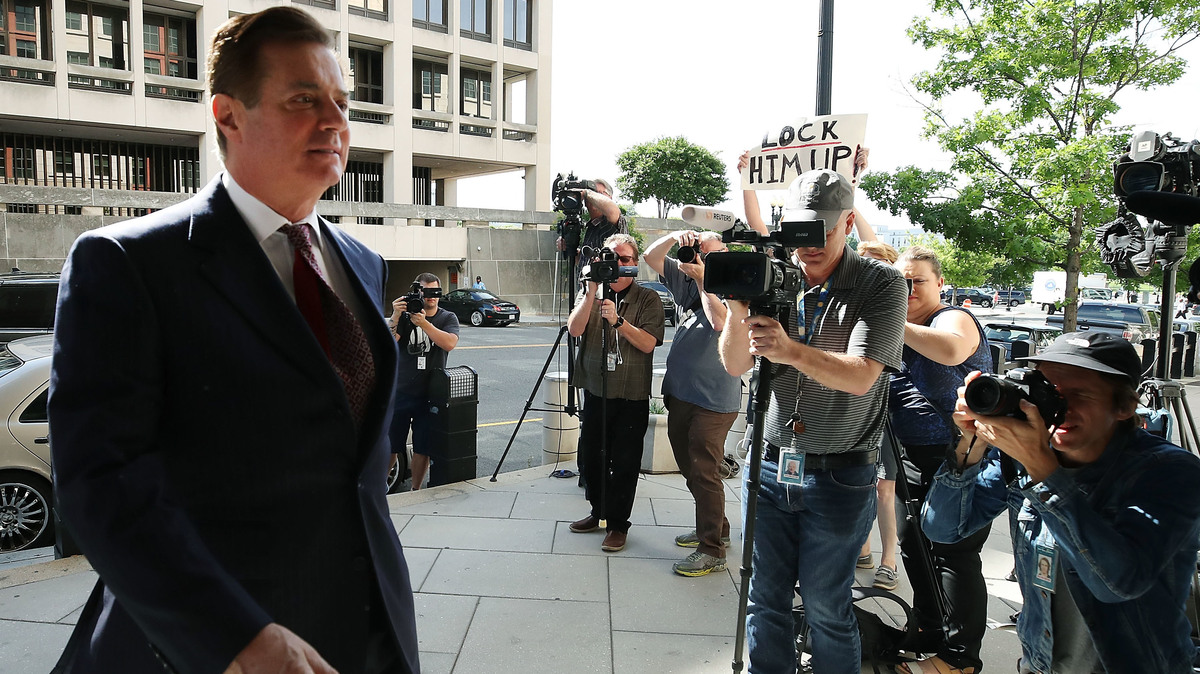 Former Trump campaign chairman Paul Manafort arrives at the federal courthouse in Washington, D.C., for a hearing in June.

A jury has been seated in the trial of former Trump campaign chairman Paul Manafort, the first trial brought on indictments by special counsel Robert Mueller’s office.

Most tax and bank fraud cases are built on stacks of bland business documents and Internal Revenue Service paperwork — hardly the stuff of international intrigue.

But the trial of Manafort, which began Tuesday in a suburban Washington, D.C., courthouse, promises to upend those low expectations.

TV crews were in place setting up outside the courthouse before 5 a.m., and the jury of six men and six women, largely white, was seated before the lunch break of the trial’s first day.

There are also four alternate jurors, three of whom are women. Opening statements are expected to begin Tuesday afternoon.

Over the course of the trial, lawyers working for special counsel Mueller plan to call witnesses they say demonstrate how Manafort spent his allegedly ill-gotten gains: custom-made suits, Persian rugs, landscaping fees, Land Rovers and Mercedes-Benz vehicles, and season tickets to the New York Yankees, among other items.

It’s what may not come up much during the trial in Alexandria, Va., that will draw attention from all over the world: Manafort’s work for candidate Donald Trump for a critical period in 2016 when Trump clinched the Republican nomination for president.

In pretrial arguments, prosecutor Greg Andres told the court that the government would only bring up Manafort’s campaign work in the context of a witness from a bank that gave him a loan, with the expectation that the banker would win consideration for a post in the Trump administration.

“I don’t anticipate that a government witness will utter the word ‘Russia,’ ” Andres said.

Manafort’s defense team has argued any mention of Trump could be seized on by jurors who have an unfavorable view of the president.

“Evidence or argument relating to Mr. Manafort’s work for then-candidate Trump’s campaign in 2016 or the Special Counsel’s investigation of the campaign’s alleged collusion with the Russian government is wholly irrelevant to whether Mr. Manafort’s personal income tax returns were false, whether he willfully failed to file reports of foreign accounts, and whether he conspired to commit, or committed, bank fraud,” defense lawyers wrote.

The trial’s first day up until the lunch break around 2 p.m. was focused on selecting the jury.

Judge T.S. Ellis III read the 60 potential jurors a brief summary of the indictment and reminded them that the indictment itself was “not proof of a crime.”

Already, Ellis has confronted questions about whether prospective jurors can be impartial in the highly charged case. Earlier this month, the judge denied a bid by Manafort to move the case out of Alexandria. The defense had worried that voters in Northern Virginia leaned more Democratic than in the western part of the state in 2016, but the Reagan-appointed judge said that was not the standard to assess whether a defendant could receive a fair trial.

“On the basis of the record presented thus far, there is no reason to believe that fair and impartial jurors cannot be found in the Eastern District of Virginia,” the judge concluded.

The prospective jurors filled out a lengthy questionnaire that asks about their experience with the criminal justice system and their familiarity with Ukraine. Manafort’s work for the pro-Russian government in Ukraine plays a central role in the allegations against him, because prosecutors say he concealed income from that work from U.S. tax officials and allegedly laundered more than $18 million in proceeds.

The heart of the government’s case involves nine years of Manafort’s lucrative lobbying and consulting for Ukraine and its former leader Viktor Yanukovych, work the U.S. government said Manafort should have registered with the Justice Department. The grand jury indictment accused Manafort of funneling the money to offshore accounts in Cyprus, the Seychelles and other locations, as well as failing to report it to the IRS.

When Yanukovych fled to Russia, Manafort and his business partner Richard Gates experienced a severe cash crunch, and the men allegedly began leveraging real estate to take out new loans, providing false or incomplete profit and loss statements and other data to banks.

Gates has since pleaded guilty and agreed to help prosecutors with their case, as one of the government’s star witnesses. That leaves Manafort, 69, facing charges that could keep him behind bars for the rest of his life. 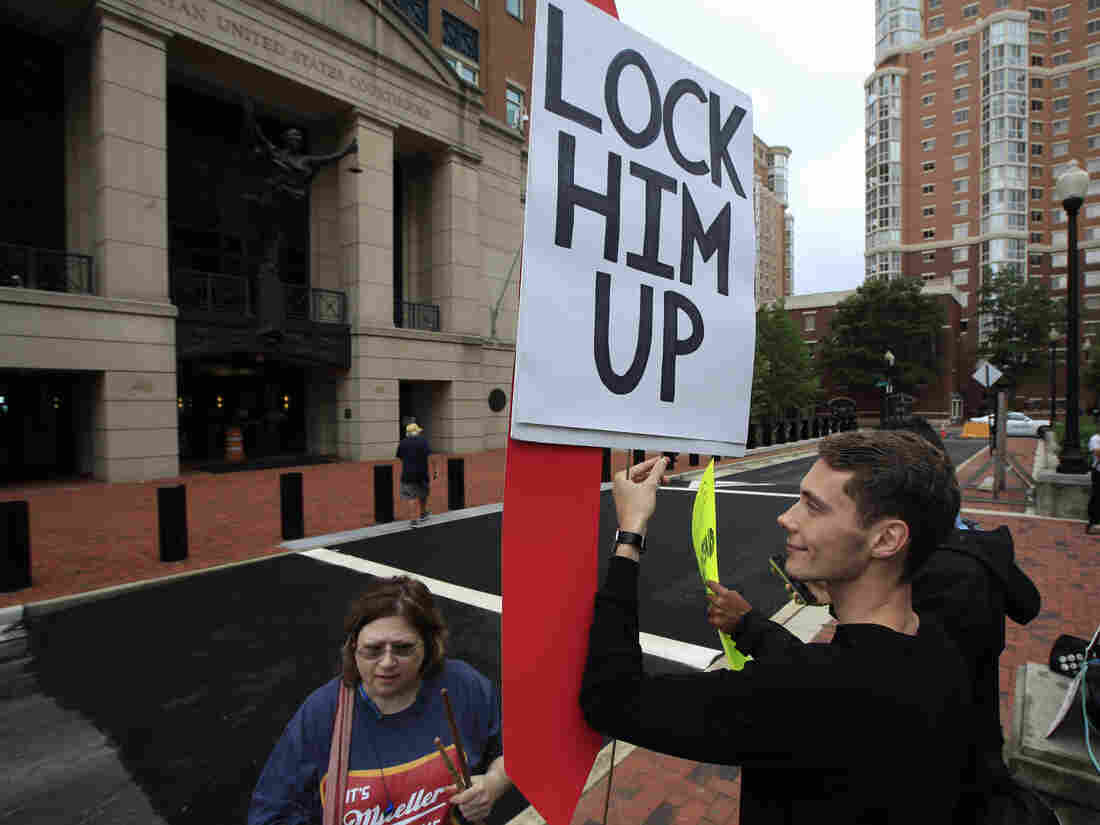 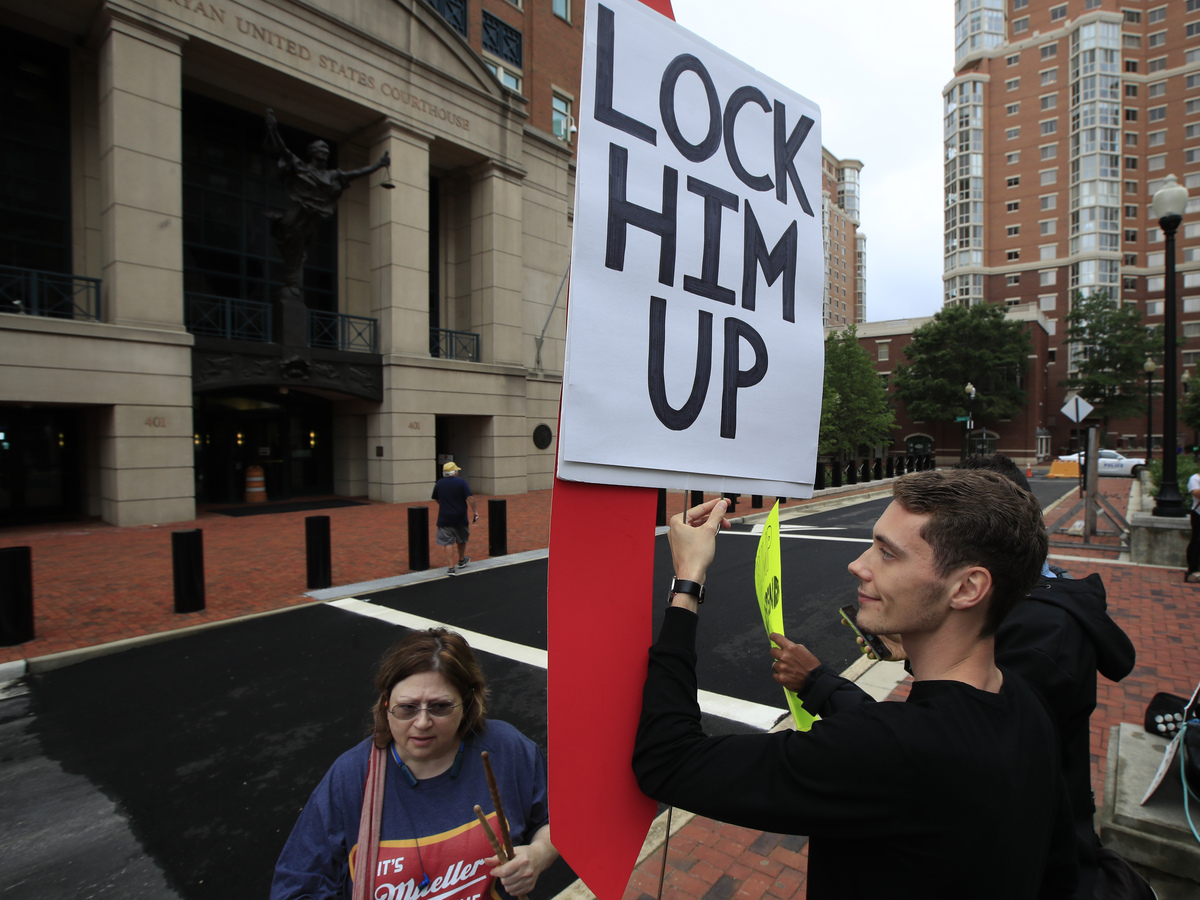 Gayelynn Taxey and Danny Hastings protest in front of the federal courthouse in Alexandria, Va., Tuesday.

Manafort’s defense team has filed a flurry of motions — to suppress evidence gathered from a Virginia storage unit, to challenge the mandate of the special counsel and to delay the trial — nearly all of which it has lost so far. A legal defense fund set up to help cover his mounting bills praises his “lifetime of service” to “no less than four United States presidents.”

Responding to allegations that Manafort took the campaign job with Trump in 2016 to pay off debts he owed to a Russian oligarch, the defense fund website asserts that he was “motivated solely by his appreciation and ardor for our country.”

“Hearing the voice of so many Americans who felt unrepresented by our government, Paul helped to define Donald Trump’s core beliefs and, along with other remarkably talented individuals, they achieved what is believed to be one of the greatest victories in the annals of any presidential campaign,” the defense fund site said.

But that lofty rhetoric stands in contrast to Manafort’s current circumstances. His legal burden grew heavier in mid-June, when a different judge, in Washington, D.C., ordered Manafort to jail, as a flight risk. A grand jury in D.C. had indicted Manafort on new charges — of alleged witness tampering — for contacting people who could testify in the cases against him.

Authorities initially detained him more than 100 miles away in the Northern Neck Regional Jail in Warsaw, Va. His lawyers cited the distance in a bid to postpone the trial until autumn at the earliest.

Instead, Ellis directed U.S. marshals to move Manafort to the detention center in Alexandria, near the courthouse. That facility has housed a variety of prominent defendants including Sept. 11 conspirator Zacarias Moussaoui, and spies Robert Hanssen and Aldrich Ames.

The judge told potential jurors that the trial would last no more than three weeks.

When it is over, Manafort will not quite be done with the justice system. He faces a separate trial in late September in Washington, D.C.