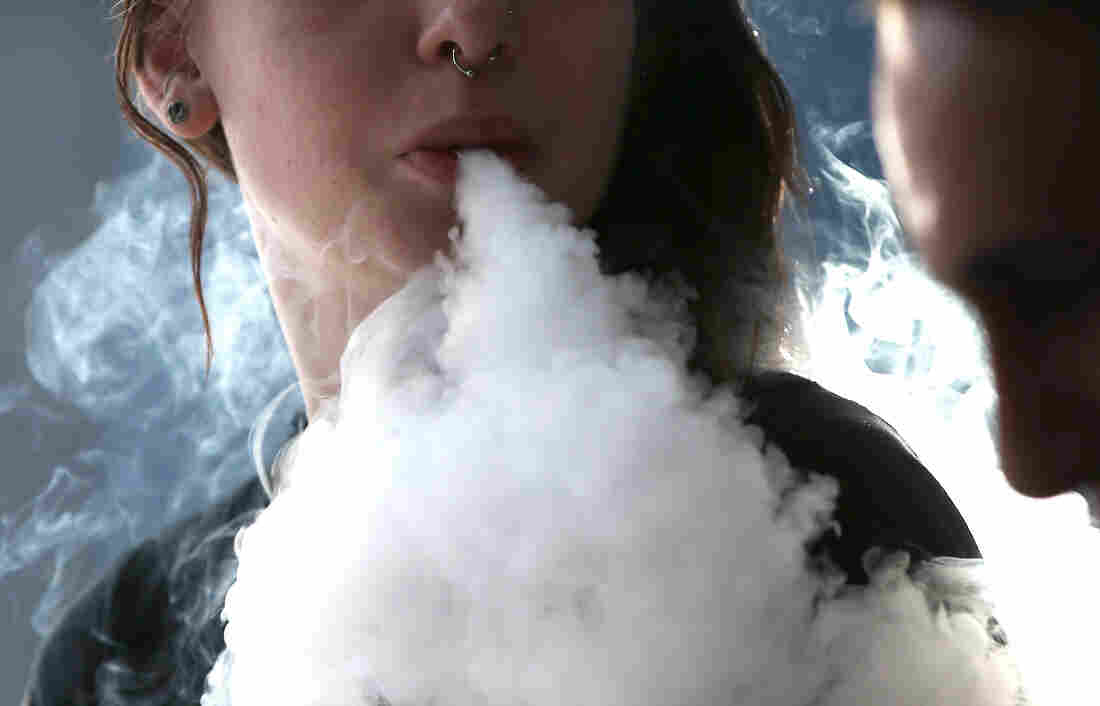 Nicotine, heavy metals and tiny particles that can harm the lungs have been found in e-cigarette aerosol, according to the surgeon general. Justin Sullivan/Getty Images hide caption 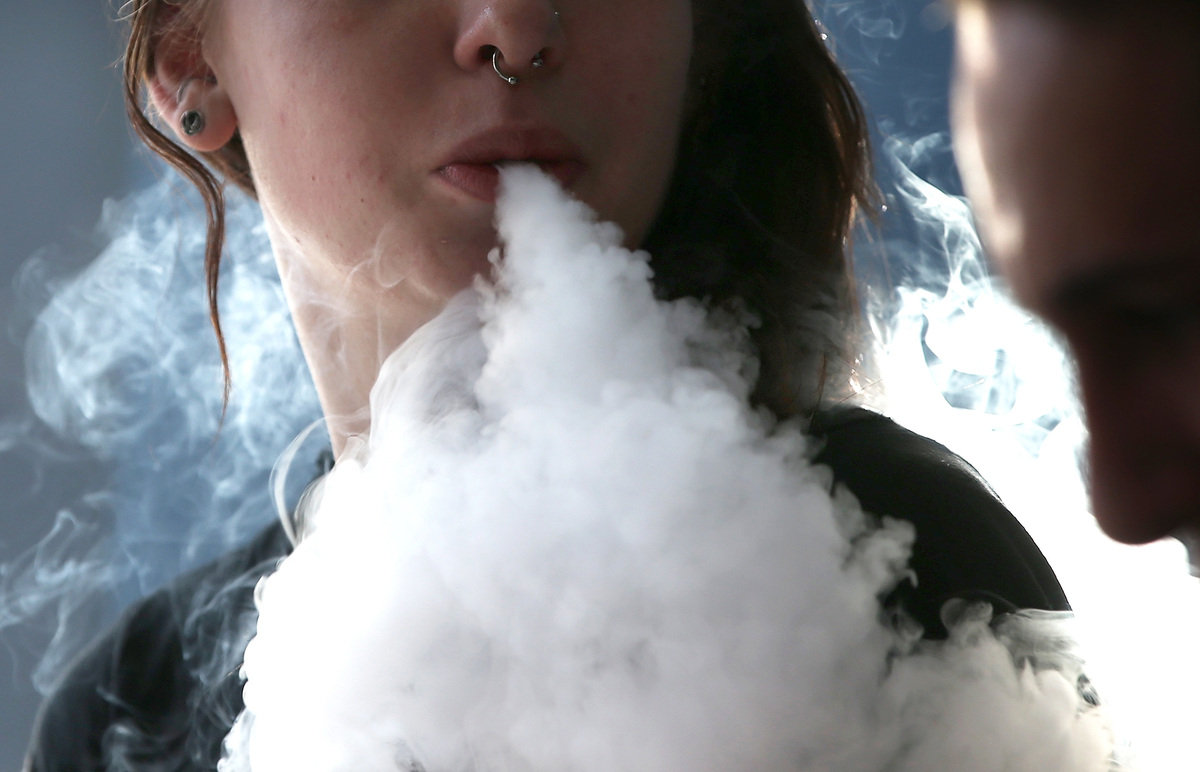 Nicotine, heavy metals and tiny particles that can harm the lungs have been found in e-cigarette aerosol, according to the surgeon general.

San Francisco could become the first city in the nation to ban flavored tobacco products from all store shelves. The ban includes everything from candy-flavored e-cigarettes to conventional menthol smokes.

City supervisors last year unanimously approved a ban on the products, but the tobacco industry funded a referendum, Proposition E, to put the issue before voters instead. San Francisco residents will decide in the June 5 election whether the ordinance goes into effect.

More than $11 million aimed at defeating it

The R.J. Reynolds Tobacco Co. is blanketing the city with ads — on the radio, television, online and via direct mail — urging a “no” vote on Proposition E. The latest campaign finance contributions show that the tobacco giant, which produces Newport menthols, the country’s best-selling mint-flavored cigarette, has contributed more than $11 million to the “No on E” campaign in San Francisco.

Some of the anti-E ads feature vintage film clips of people smashing kegs during Prohibition and argue that approach didn’t stop the use of alcohol and drugs and won’t work for flavored tobacco, either.

San Francisco resident Donna Anderson agrees. Though she doesn’t smoke herself, she protested on behalf of the No on E campaign during a recent rally near San Francisco’s City Hall.

She uses the example of marijuana laws to illustrate how a black market can hurt people of color the most.

“Black people, Latino people — people have been locked up, and are still locked up, having to do with little more than an ounce of marijuana,” she says.

At the Mission Smoke Shop, Sam Azar has plastered the walls of his store with “No-on-E” signs.

“It’s going to hurt me as a small business here in the city by — like 30 percent or more,” Azar predicts.

The law would eliminate his profits from sales of flavored pipe tobacco, flavored hookah, infused cigars and the syrupy vape liquids that line numerous racks. There are more than 7,000 sweet and savory e-cigarette flavors on the market — flavors that include Gummi Bear, Unicorn Milk, Red Bull and Nat-Cho Cheese.

A gateway to cigarettes?

Medical experts worry about the role these flavors and aromas play in enticing young people to try nicotine and get hooked on cigarettes — perhaps outweighing any potential benefit adult smokers might gain from using the products to help them quit smoking. 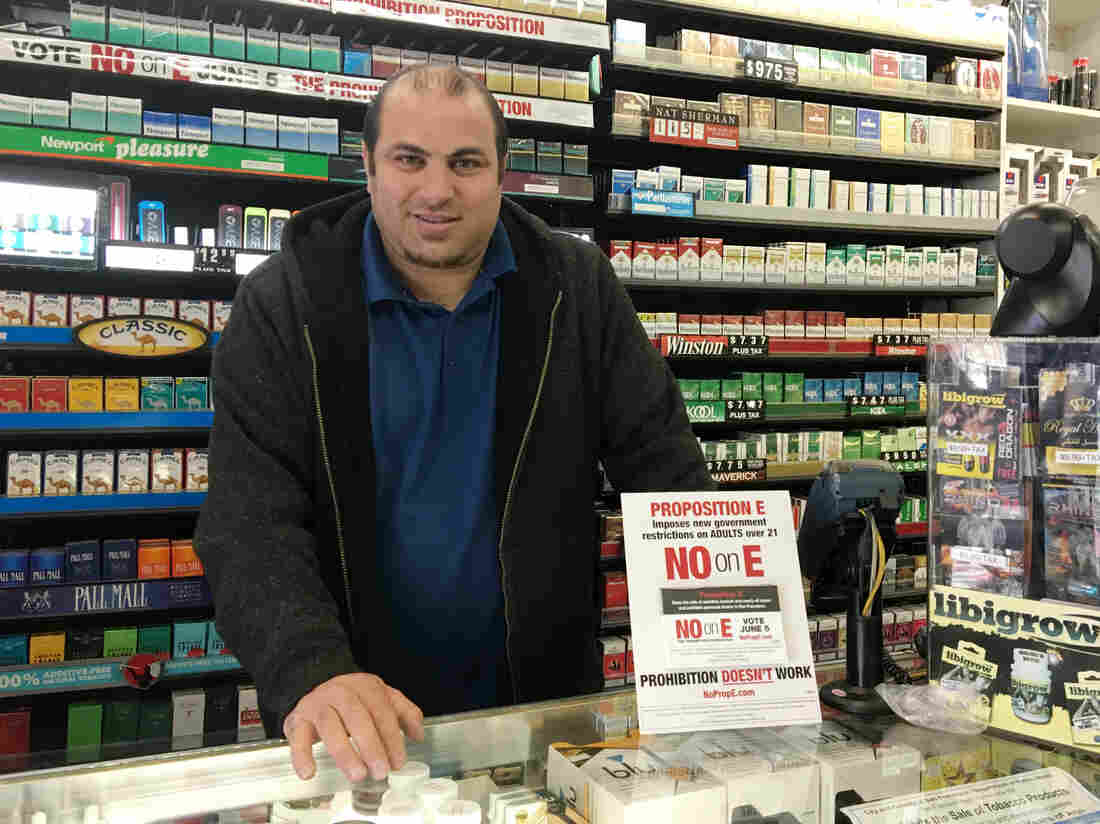 Sam Azar worries about how a ban on flavored tobacco products would hurt the bottom line at his Mission Smoke Shop in San Francisco. Lesley McClurg/KQED hide caption 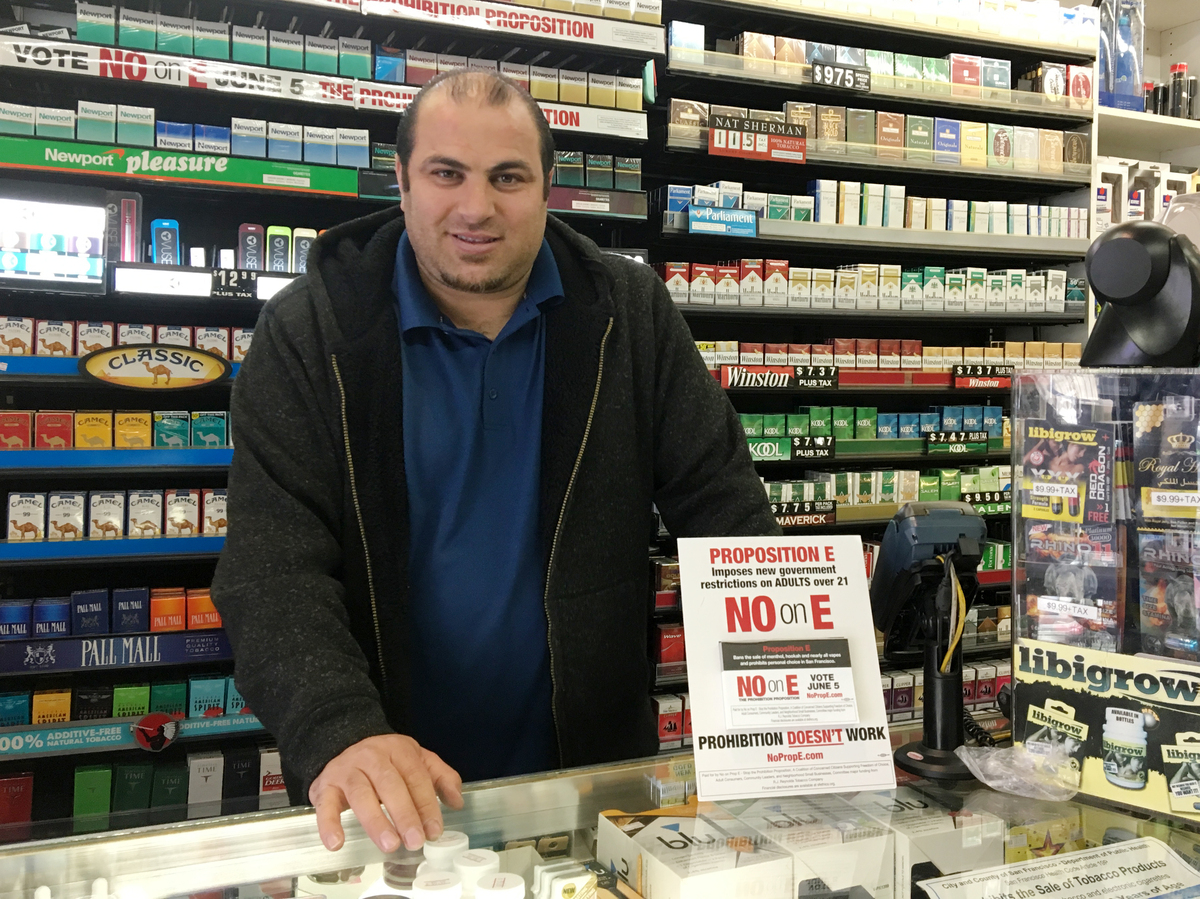 Sam Azar worries about how a ban on flavored tobacco products would hurt the bottom line at his Mission Smoke Shop in San Francisco.

Derek Smith, director of the Tobacco Free Project at the San Francisco Department of Public Health, says flavors and menthol deceptively mask the taste of tobacco and make it easier to inhale nicotine.

“Someone who has tried a cigarette for the first time will often turn green and cough,” Smith says. “Imagine instead a cereal, milk-flavored inhalation that is considerably less harsh to start with.”

Nearly all youth in the state start their tobacco habit with a flavored product, Smith says, and that worries doctors who gathered at a recent “Yes-on-E” rally on the steps of City Hall.

“The tobacco industry has targeted menthol cigarettes to the black community, to poor people, to mothers,” says Dr. Amanda Wright, an internist at the University of California, San Francisco and resident physician. “And if you look at these products,” she says, “they literally look like candy — and that is clearly targeting our children.”

At the rally, Wright stood next to a table laden with row after row of juice boxes and candy wrappers. They looked like sugary snack foods but were actually packages of vaping products. 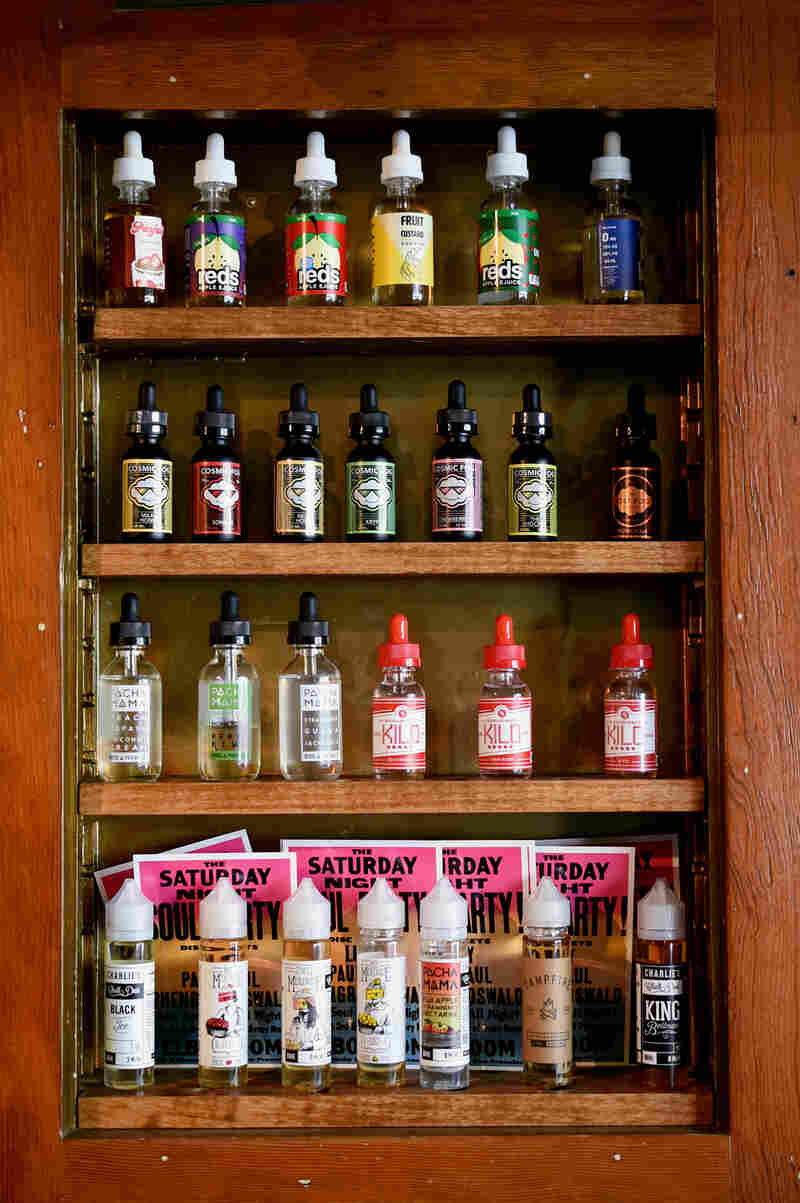 Nicotine and the teenage brain

Nicotine is particularly addictive for the teenage brain, according to Dr. Pam Ling, a professor of medicine at UCSF who studies smoking behavior and its effects.

“This population is the future of the tobacco industry,” says Ling. “The industry recognized decades ago that if they don’t get kids to start, [the industry] will die out.”

According to the California Department of Public Health, the number of kids in California who vape is currently double the number who smoke. But research suggests that a lot of those kids will be smoking cigarettes before long.

“Once these kids start with the e-cigarettes, the likelihood that they’ll be smoking cigarettes a year or so later is increased by a factor of three or four,” says Stanton Glantz, who heads the Center for Tobacco Control Research and Education at UCSF.

Glantz says that in his research, about a third of the kids who start using nicotine via e-cigarettes are not the kind of kids whose race, gender, home life and school performance would make them a high risk to pick up smoking on their own.

In other words, vaping is increasing the pool of teen smokers. A 2016 report from the U.S. Surgeon General cited a 900 percent increase in the use of e-cigarettes by high school students from 2011 to 2015. Right now there is very little regulation of e-products at the federal level.

“When e-cigarettes first became available, there was a lot of hope that they would be better than cigarettes,” Glantz says, “but the more we learn, the worse they look.”

Though the long-term health effects of smoking e-cigarettes is still unknown, Glantz believes the safety of the devices has been oversold.

“Electronic smoking products emit particles of chemicals, not clean air, and technically an aerosol, not a vapor,” Smith says. “Think smog or hairspray — not the pure water vapor that steams when your teapot whistles.”

These ultrafine particles and toxins can damage the lungs and may lead to heart attacks. Levels of the particles in the vapor produced by some devices may be lower than in tobacco smoke, but aren’t zero.

If San Francisco voters pass the flavor ban, it will be among the toughest restrictions on e-cigarettes in the United States; opponents of the measure fear it will set a precedent.

This story was produced by the science and health team at KQED.