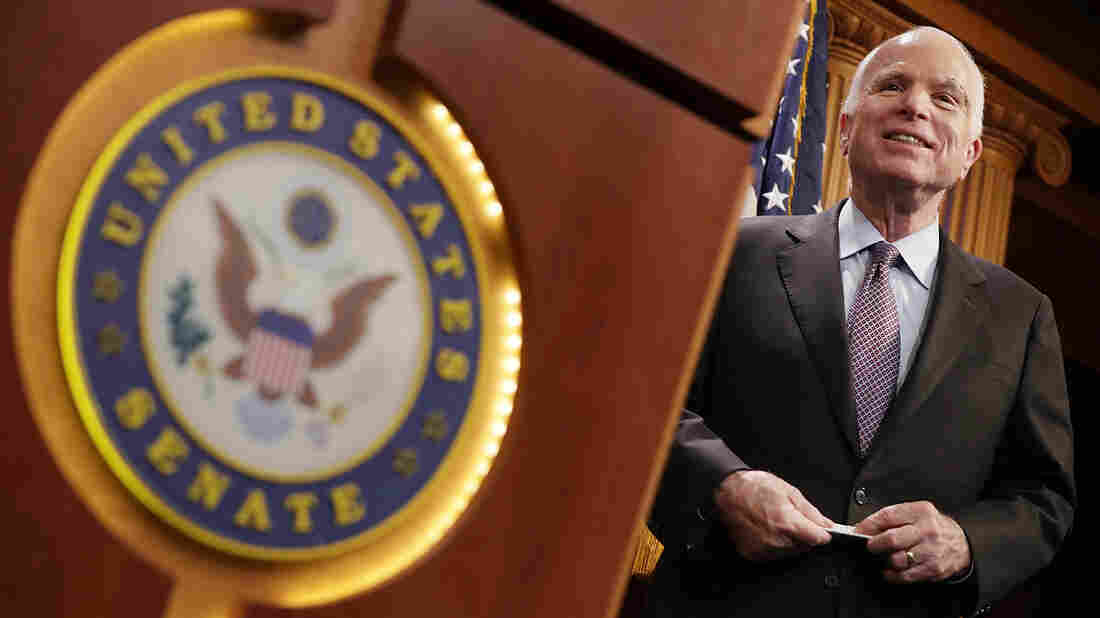 Sen. John McCain, R-Ariz., is coming out with a memoir May 22. An excerpt was released Monday. Chip Somodevilla/Getty Images hide caption 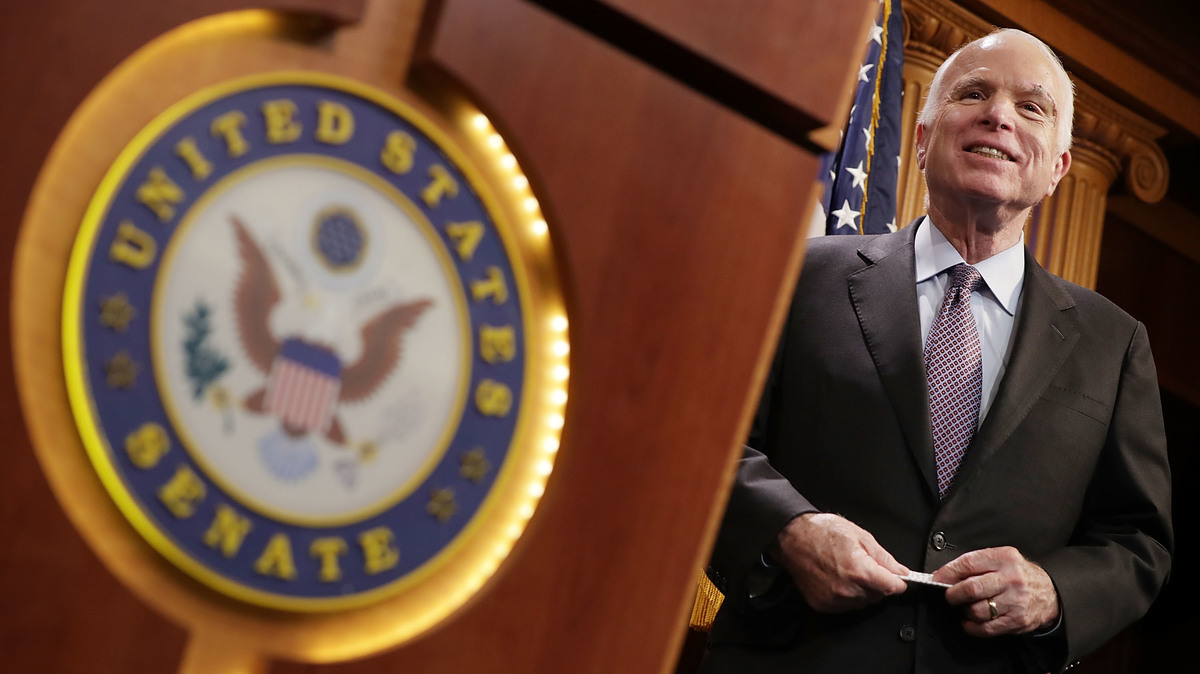 Sen. John McCain, R-Ariz., is coming out with a memoir May 22. An excerpt was released Monday.

While Washington is consumed with the aftermath of yet another biting comedian’s performance at a White House Correspondent’s dinner, answers on bridging the political divide seem harder to come by.

Arizona Sen. John McCain, who is dealing with the effects of brain cancer, is out with an excerpt of his forthcoming memoir, The Restless Wave, that gives some of his philosophy on how to do it — and obliquely criticizes President Trump.

The sometimes cantankerous former presidential candidate and prisoner of war points out that he hasn’t at times lived up to his own standard, as he has “disagreed, sometimes too heatedly, with all of” the six presidents he has served alongside.

But, he writes, humility is key. He defines it as “the self-knowledge that you possess as much inherent dignity as anyone else, and not one bit more.”

He adds, “Among its other virtues, humility makes for more productive politics. If it vanishes entirely, we will tear our society apart.”

It hasn’t always been an easy line for McCain to walk. In 2008, as the Republican standard-bearer, McCain was in the middle of a changing political climate. Anger toward President George W. Bush, the war in Iraq and a declining economy all contributed to a new level of toxicity in American politics.

The left responded to that moment by nominating Barack Obama. But Obama’s election eventually gave rise to an anger on the right, fueled by the Tea Party and Sarah Palin. Palin happened to be who McCain had selected as his vice-presidential running mate, which raised her profile and made her a hero among conservatives.

It was clear who the energy was with on the right during that 2008 campaign — some people ripped off the “McCain” portion of their bumper stickers and kept “Palin.”

McCain at one point had to deal with the backlash of that energy on the campaign trail, correcting a woman who claimed, with apparent disdain, that Obama was an “Arab.” “No, ma’am,” McCain responded. But the lid had been ripped off, and it all laid the groundwork for Trump, someone McCain clearly shows in the book excerpt that he’s no fan of — in style or substance.

“He has declined to distinguish the actions of our government from the crimes of despotic ones,” writes McCain, a noted pro-interventionist hawk, who has made freedoms and democracy abroad a signature issue. “The appearance of toughness, or a reality show facsimile of toughness, seems to matter more than any of our values.”

He points out that a big reason for gridlock in Washington is partisanship more broadly.

“We are secluding ourselves in ideological ghettos,” McCain writes. “We have our own news sources. We exchange ideas mostly or exclusively with people who agree with us, and troll those who don’t. Increasingly, we have our own facts to reinforce our convictions and any empirical evidence that disputes them is branded as ‘fake.’ That’s a social trend that is going to be very hard to turn around.”

Trump, his White House team and supporters have routinely dismissed the news media as “fake news.” White House counselor Kellyanne Conway even at one point early in the Trump administration coined the phrase “alternative facts” when faced with evidence that Trump’s inauguration crowd was not the largest ever.

Sean Spicer, the White House press secretary who was at the forefront of the criticism for defending the president on the crowd boasts, said after he left that job that he had some regrets.

“I regret things that I did that brought embarrassment to myself, my family, friends of mine who have been very big supporters, where I said, ‘Hey, that was a self-inflicted wound,” he said on MSNBC in January. “I screwed up.”

McCain, though, does not solely blame Trump, his staff or even other politicians for the political climate in the country.

“Paradoxically,” McCain writes, “voters who detest Washington, because all we do is argue and never get anything done frequently vote for candidates who are the most adamant in their assurances that they will never ever compromise with those bastards in the other party.”

He notes that if you’re not like that, if you lament the lack of civility, the lack of compromise, then do something about it.

“Because I guarantee you,” McCain notes, “voters on the Far Right and Far Left are. If you want politics to be more civil, if you want Congress to argue less and get more done, then show up. Represent. Play as big a role in the mundane activities of politics as the zealots do. It’s important.”

He ticks through several political reforms that could make things better — namely getting rid of the practice of gerrymandering and a more open campaign finance system that gets dark money — money that can’t be traced back to a donor — out of politics.

But it’s going to take more than that, McCain notes:

“As always, more important than any political reforms is the discernment of voters. Here’s my unsolicited advice to the American voter: If a candidate for Congress pledges to ride his white horse to Washington and lay waste to all the scoundrels living off your taxes, to never work or socialize or compromise with any of them, and then somehow get them to bow to your will and the superiority of your ideas, don’t vote for that guy. It sounds exciting, but it’s an empty boast and a commitment to more gridlock.”

Support, instead, candidates who want to get things done:

“Yes, I’d rather have a few more problem solvers than purists in Washington. Their zeal may be commendable, but not, as it usually happens, terribly productive.”

More broadly, he writes that Americans need to realize that people of other parties can be good people:

“We need to recover some perspective about how much someone’s politics is a testament to their character. When did politics become the principal or only attribute we use to judge people? Republicans and Democrats can be good neighbors, loving parents, loyal Americans, decent human beings. I don’t remember another time in my life when so many Americans considered someone’s partisan affiliation a test of whether that person was entitled to their respect.”