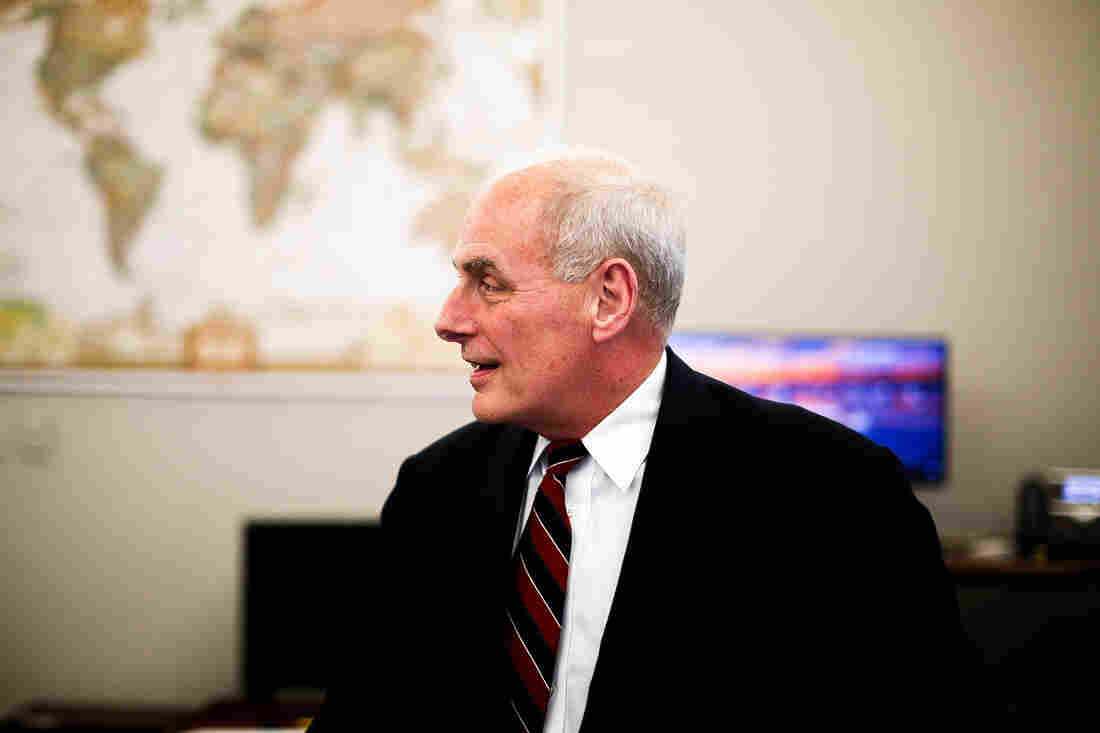 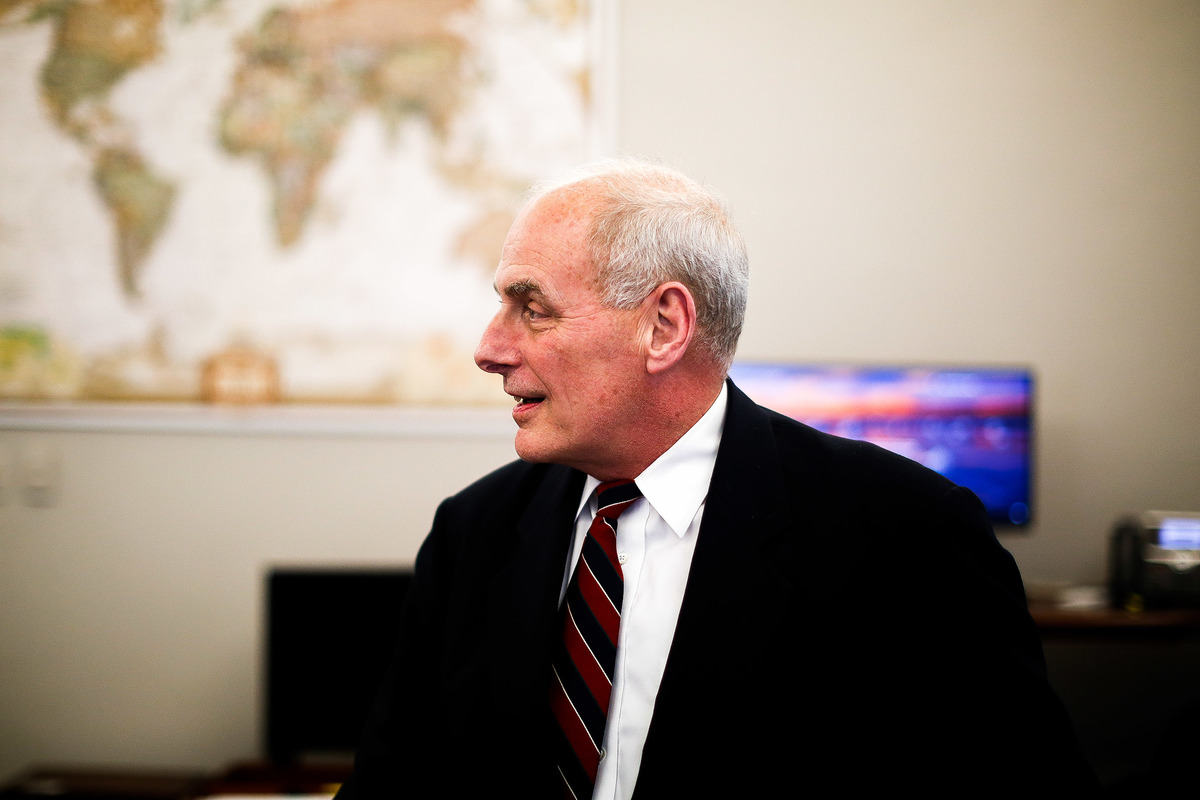 White House Chief of Staff John Kelly in his office in the West Wing.

President Trump’s chief of staff, Gen. John Kelly, said that he’s never seriously considered leaving his job and indicated that he’s in lock-step with the president. Kelly says they have “a close relationship” and spend up to eight hours a day together.

“My view is to speak truth to power. I always give my opinion on everything. He always listens,” he said. “Sometimes he takes the opinion, sometimes he doesn’t.”

Kelly’s remarks came in a wide-ranging interview with NPR’s John Burnett airing on Morning Edition. Kelly also praised the president’s decision to pull out of the Iran nuclear deal and said Trump’s eyes are “wide open” on North Korea and that he won’t get “strung along” like past presidents have.

Kelly said his only regret in taking the job of helping run the White House staff is that he didn’t arrive there sooner.

“In retrospect, I wish I had been here from day one,” Kelly told NPR. “I think in some cases in terms of staffing or serving the president that first six months was pretty chaotic and there were people some people hired that maybe shouldn’t have hired some people there were.”

“It’s not that things were a disaster that for six months but I believe they could have been better,” he added. It was clear from his “perch” as secretary of Homeland Security, he said, “that the White House was less organized than our president deserved.”

When asked whether he had ever seriously considered leaving the post of White House chief of staff, Kelly said emphatically, “No.”

“There’s times of great frustration, mostly because of the stories I read about myself or others that I think the world of, which is just about everybody who works at the complex and wonder whether it’s worth it to be subjected to that,” he said.

Kelly also said he thinks the president is “a super smart guy.”

“He’s very strong in terms of trade, taxes, business and he’s a quick study on everything else,” Kelly said, “He’s a pretty bright guy.”

Kelly, who was previously the secretary of the Department of Homeland Security, also spoke about the administration’s aggressive enforcement of U.S. immigration law, Trump’s upcoming meeting with North Korean leader Kim Jong Un, and what’s next after the U.S. withdrew from the Iran nuclear deal.

On whether he believes the Russia investigation is a ‘witch hunt,’ as Trump often calls it

Something that has gone on this long without any real meat on the bone, it suggests to me that there is nothing there, relative to our President.

It may not be a cloud but certainly the President is, you know, somewhat embarrassed, frankly. When world leaders come in, it’s kind of like you know Bibi Netanyahu is here and he who’s under investigation himself and it’s like, you know, you walk in and you know the first couple of minutes of every conversation might revolve around that kind of thing.

I don’t think so. I mean it was a horrible deal. … [The next step is] ensuring that a country that has been very unreliable in their claims about not ever having a nuclear program … doesn’t get a nuclear program, and in a country that is developing ICBMs. I don’t know the rational man and woman who can’t quite understand why he’d need an ICBM that could reach Europe or the United States.

Regarding the upcoming summit with North Korea’s Kim Jong-un, when asked how the president can be sure he’s not being tricked

Yeah – not sure. But this president’s got his eyes wide open. Believe me, the president really wants this to work. We talk fairly frequently about nuclear weapons and he’s just astounded that the United States, that the human race has got itself into this dilemma with all of these nuclear weapons and as he says – to help North Korea give up its nuclear program and its missile program would be a wonderful thing. … I know he won’t fall for it in the same way that past presidents have, that get strung along, strung along lifting sanctions, giving them money, and get nothing for it.

Let me step back and tell you that the vast majority of the people that move illegally into United States are not bad people. They’re not criminals. They’re not MS13. … But they’re also not people that would easily assimilate into the United States into our modern society. They’re overwhelmingly rural people. In the countries they come from, fourth-, fifth-, sixth-grade educations are kind of the norm. They don’t speak English; obviously that’s a big thing. … They don’t integrate well; they don’t have skills. They’re not bad people. They’re coming here for a reason. And I sympathize with the reason. But the laws are the laws. … The big point is they elected to come illegally into the United States, and this is a technique that no one hopes will be used extensively or for very long.

I think we should fold all of the TPS people that have been here for a considerable period of time and find a way for them to be on a path to citizenship. … Take the Central Americans that have been here 20 plus years. … By doing what she’s done, Secretary Nielsen once again is forcing the United States Congress to do something. I mean I can’t tell you the number of times in my hearings when they would ask me about why we’re doing this, so what is your philosophy on immigration or whatever. I just said, ‘Look, you make the laws. I execute the laws.’ I can’t pick and choose what laws to enforce. I would be, I should be thrown out of the job if I do that.