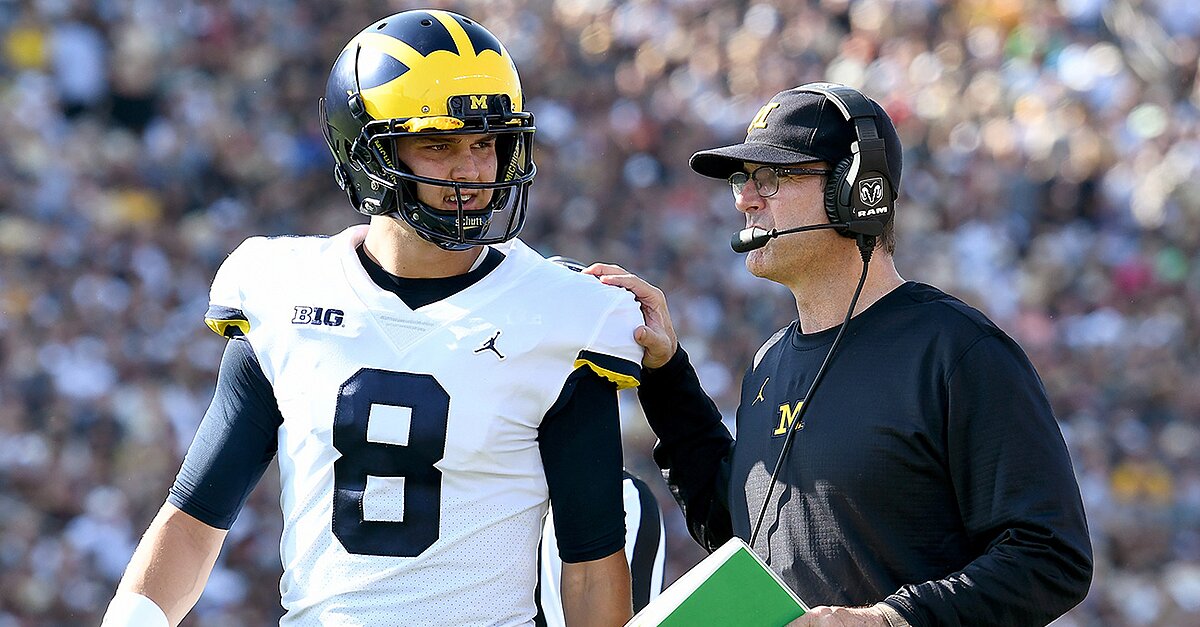 Jim Harbaugh has tried not to make headlines this offseason, but he’s still inspiring questions…

From Larry: With Jim Harbaugh using transfer QBs every year, can it affect the ability to recruit QBs to Michigan?

It certainly will be something opposing coaches use against the Wolverines in recruiting if it keeps up. In Harbaugh’s three seasons at Michigan, his starters have been Jake Rudock (Iowa graduate transfer), Wilton Speight (inherited from Brady Hoke), John O’Korn (Houston transfer) and Brandon Peters (recruited by Harbaugh’s staff). Speight has transferred to UCLA, and Peters may get supplanted by Ole Miss transfer Shea Patterson. So here is what Urban Meyer might say if he finds himself recruiting the same quarterback as the Wolverines.

Meyer: I signed him. You know Dwayne Haskins?

Meyer: The very same. I signed him, too. Do you know how many of my starting quarterbacks I inherited or signed at Florida and Ohio State?

Meyer: All of them. Now who would you rather sign with?

This isn’t limited to Michigan, by the way. LSU’s best two quarterbacks this decade (Zach Mettenberger and Danny Etling) were transfers, and the Tigers are currently pursuing Ohio State graduate transfer Joe Burrow. Under current Michigan assistant Jim McElwain, Florida turned to multiple transfers (Luke Del Rio, Austin Appleby, Malik Zaire) at quarterback at various times in a three-season span. West Virginia’s last three starting quarterbacks (Clint Trickett, Skyler Howard, Will Grier) were transfers. In the absence of a homegrown player who grabs control of the job, a transfer allows a coach to plug in a player—who probably has some experience—and buy time until he can sign the next homegrown star. But of the programs listed above, only West Virginia has truly hit the jackpot with a transfer (Grier, who came from Florida). The hit rate is low because there is usually a reason why a player transfers, and that reason usually is because one or more other players at the previous school was better*.

*Russell Wilson remains the glaring exception to this. Tom O’Brien willfully ignored which player was actually better at football when choosing between Wilson and Mike Glennon, and that’s why Dave Doeren coaches NC State now.

At a certain point, a coach must prove he can develop the quarterbacks already on his roster. Harbaugh has done this at the college level with Josh Johnson (inherited at San Diego) and Andrew Luck (signed at Stanford), so he has a proven history. The problem is that proof keeps fading further into the past.

The good news is that ultimately, recruits want to win. If Harbaugh winds up starting Patterson and the Wolverines win big, high school quarterbacks will be happy to climb aboard. But if Michigan stays in the middle of the pack in the Big Ten East, the best quarterbacks might be swayed by the argument of a coach with a better recent track record of developing the QBs on his roster.

From Shawn: At what point do the #SnyderCats get a new coach, as Bill can’t coach forever? #emaw

Let’s start by saying that Kansas State coach Bill Snyder has earned the right to coach as long as he damn well pleases. If you account for degree of difficulty, he’s up there with Meyer, Nick Saban and Dabo Swinney. He also doesn’t seem to be dropping off. But Shawn is correct. Snyder, who turns 79 in October, can’t coach forever.

And while he should be able to coach as long as he wants, Snyder probably shouldn’t be able to unilaterally decide on his successor. By most accounts, Snyder would prefer that his son Sean take over the Wildcats. And Sean, Kansas State’s associate head coach and special teams coordinator, certainly would get consideration. But the elder Snyder has made Kansas State such a good job that plenty of qualified candidates—who have experience as Power 5 head coaches and/or Power 5 offensive or defensive coordinators—would want the job when Snyder retires. (Former Wisconsin and Arkansas coach Bret Bielema would be an obvious look if he’s still a free agent.)

So what happens? Would Snyder try the retire-before-the-season gambit to give Sean a chance to run the program for a season and prove he deserves the job? Bob Stoops did this at Oklahoma last year in order to give Lincoln Riley as much runway as possible, but Oklahoma athletic director Joe Castiglione and president David Boren already were in agreement that Riley should be the Sooners’ next head coach. Interim status never was a consideration. A messier, in-season version of this happened at Wisconsin, where former basketball coach Bo Ryan wanted assistant Greg Gard to succeed him. But the specter of Tony Bennett—the son of former Badgers coach Dick Bennett and the current coach at Virginia—loomed. Ryan originally decided to retire in June 2015, but then he changed his mind and kept coaching. Twelve games into the 2015–16 season, he retired for good. Gard was named the interim coach. He went 15–8 the rest of the way, reached the Sweet 16 and was named the permanent head coach.

This season could be an interesting one for the Wildcats. They return 10 starters on offense. They have two good options at quarterback in Alex Delton and Skylar Thompson. But they did lose offensive coordinator Dana Dimel, who took over as the head coach at UTEP. Kansas State brings back five starters on defense, but several new starters up front played plenty as backups. In a Big 12 where everyone except Kansas State and West Virginia must replace critical contributors, the Wildcats have a chance to make noise.

Would a good season convince Snyder the program is in good hands and allow him to hang it up (a second time)? Or would it energize him to coach into his 80s?

The situation in the Little Apple will be fascinating to watch this season, because no one but Snyder truly knows what the future holds.

From Dan: What’s the answer to the Pac-12 Network getting wider distribution? Is it strictly an issue of demand? Will a WWE Network style solution fix the problem, especially for cord cutters? The big games on the Networks, all of the other content on a OTT platform?

No one ever wants to hear this, but the only answer to getting wider distribution for a cable network is to make more people care about the programming on that network. While the fighting between the parties is well documented, the truth of the matter is the Pac-12 Network isn’t on DirecTV because not enough people canceled DirecTV when it refused to carry the network. Compare this to the SEC, where fans would threaten to burn down a cable company or satellite carrier if it didn’t carry the SEC Network. Pac-12 fans just don’t care as much about their teams as SEC and Big Ten fans care.

With apologies to the SEC’s advertising firm, it just means less out west.

So the problem—a revenue gap between Pac-12 schools and the rest of the Power 5, but especially the SEC and Big Ten—probably never will get fixed. But that doesn’t mean the Pac-12 can’t have good football programs. The league brings in enough money through its ESPN and Fox deals and through the network to have competitive football teams. At a certain point, you’re still rich—even if someone else is much richer. And everyone in the Power 5 is rich.

But that doesn’t mean the Pac-12 can’t be creative and make more for its schools. When the current set of media rights deals expires following the 2023–24 school year, conference leaders will have to decide how to best maximize their revenue. Last time around, they sold 44 football games a year to Fox and ESPN and kept the rest to form the backbone of the network’s programming. They also decided to wholly own the network instead of partnering with ESPN (ACC, SEC, Texas) or Fox (Big Ten). This was a risk that didn’t pay off, because while the Pac-12 didn’t have to share revenue with a partner, it also lost the leverage that Fox or ESPN owner Disney could provide in a carriage negotiation.

The question when those media rights deals expire is what will work best. The Pac-12 can’t currently sell its own network to individual customers on a streaming basis (known in industry parlance as over-the-top) lest it run afoul of the cable and satellite carriers who currently carry the network. (And no matter what anyone says, having millions of people who don’t care about sports paying a subscription fee most don’t realize they’re paying is still the most profitable option at the moment.) Those carriers would want to renegotiate their deals immediately if over-the-top sales happened before the current contracts expire. But when the deals expire, it’s unclear how the majority of Americans will receive their programming. Cord-cutting feels like a generational phenomenon, which means the number of cable subscribers has peaked and will only keep falling. Maybe society will be ready for a league to sell its entire offering over-the-top, but that seems unlikely to have happened six years from now.

Perhaps selling the network over-the-top and selling the best games to networks at a premium will be the most profitable option at the time. It still won’t be as profitable as the Big Ten, but it would make significant money and ensure everyone could get the Pac-12 Network regardless of cable or satellite carrier.