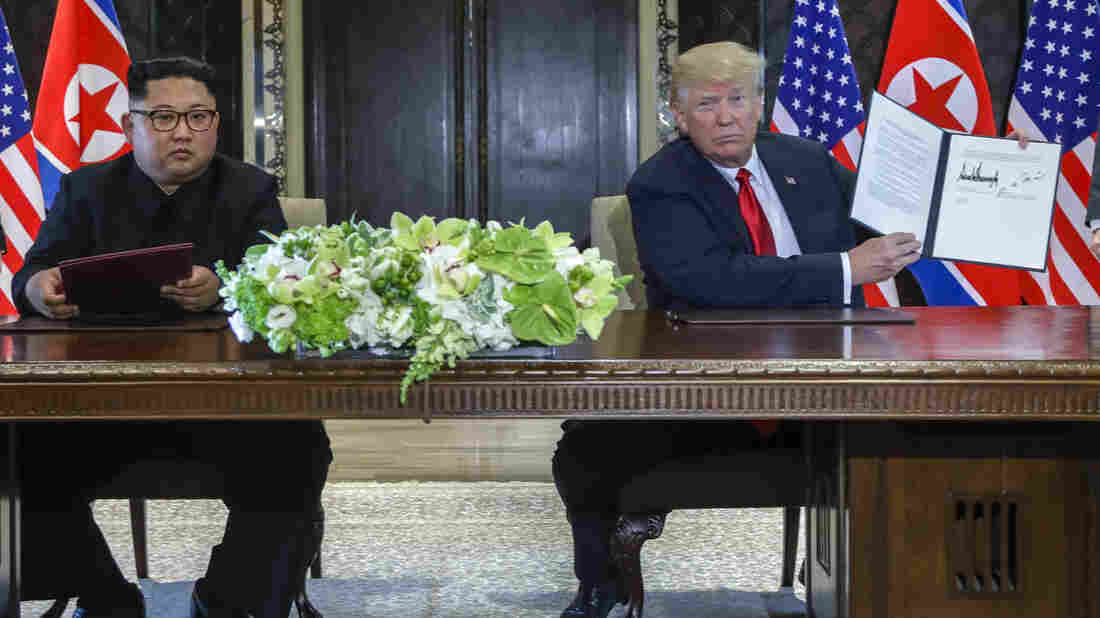 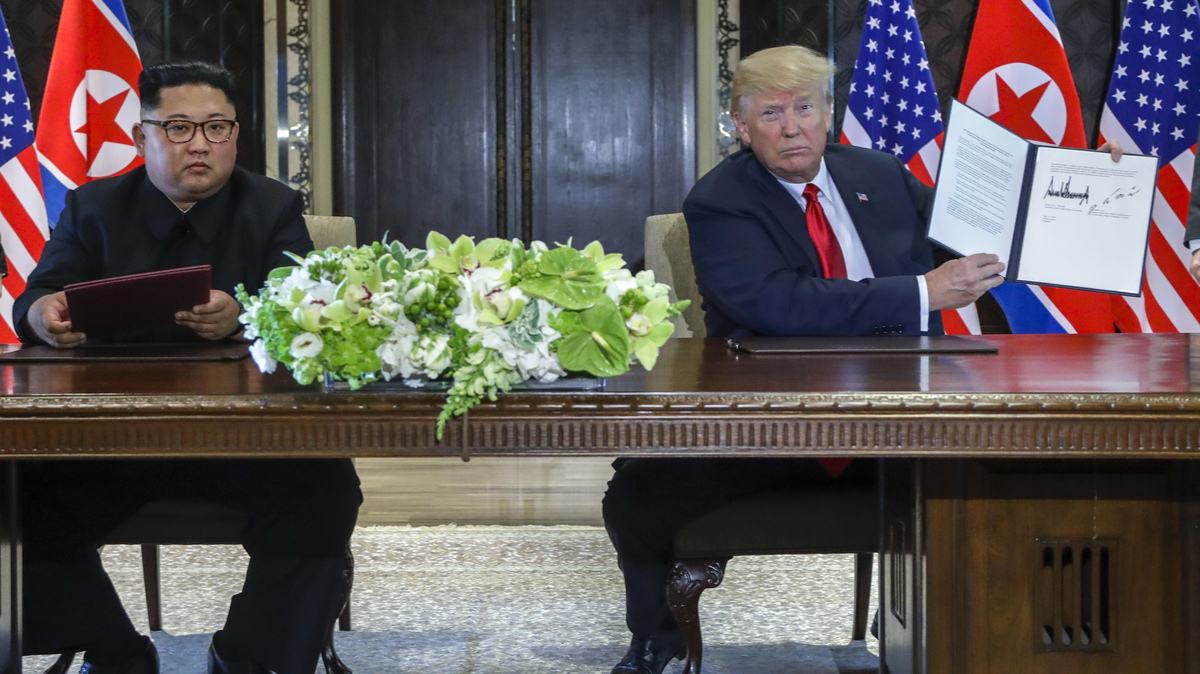 U.S. President Donald Trump holds up a document he and North Korean leader Kim Jong Un signed at the US North Korea summit in Singapore.

If North Korean leader Kim Jong Un manages detente in his summit with President Trump, it could be a prelude to opening one of the most closed economies in the world.

During his trip to Singapore, Kim has hinted he might be in favor of beginning that process. North Korea’s state media reported on Tuesday that Kim was impressed with the city-state’s economic development, and hopes he can learn from the country.

In advance of the historic summit, the first between a sitting U.S. president and leader of North Korea, American officials dangled economic support of North Korea as a carrot for Pyongyang’s willingness to get rid of its nuclear arsenal. Trump has spoken of North Korea’s huge “economic potential,” and The Wall Street Journal reports Secretary of State Mike Pompeo said that if Kim agrees to denuclearization, the U.S. would be happy to share “technology, knowledge, entrepreneurship, efforts to build systems.”

Chinese, South Korean, and some American investors might be eager for such an opportunity.

Earlier this year South Korean President Moon Jae-in instructed his Cabinet to explore ways to finance inter-Korean business and trade projects. In his meeting with Kim at the Korean Demilitarized Zone, Moon gave him a USB flash drive with blueprints for economic cooperation.

North and South Korea have established such joint investment and trade projects before, which were a focal point of South Korea’s “Sunshine policy” towards North Korea between 1998 and 2008.

While trade and investment with North Korea might be a means for South Korea to maintain peace on the Korean peninsula, for China it is also a way to make money, and shore up its relationship with the leadership in Pyongyang.

China is North Korea’s historic ally, and biggest trading partner, accounting for 90 percent of trade with North Korea. Until trade restrictions were imposed on North Korea last fall, China’s trade with the regime had steadily increased over the past few years.

In 2011, Forbes reported that one American investor hoped to bring Coca-Cola to North Korea. More recently, NBC News said a U.S. intelligence report revealed that Kim may allow a “Western hamburger franchise” into the country as a sign of goodwill to the United States.

Geographically, North Korea’s location is a potential crossroads between South Korea and China, which both have powerful economies. Its strategic location makes North Korea ripe for the construction of infrastructure, rail, and road routes. While its economy is currently based on agriculture, it has substantial reserves of iron ore, coal, limestone and metals, and North Korea’s young population, with a median age of 34, could help in its transformation.

However, North Korea’s unskilled workforce, and lack of a developed legal system, are just some of the significant challenges investors might face, but the country also presents tantalizing opportunities.

Our United States team has arrived in North Korea to make arrangements for the Summit between Kim Jong Un and myself. I truly believe North Korea has brilliant potential and will be a great economic and financial Nation one day. Kim Jong Un agrees with me on this. It will happen!

Trump tweeted last month he believes North Korea will be a great economic and financial nation in the future, “Kim Jong Un agrees with me on this. It will happen!”

In North Korea, CNN reports that on the day of Trump and Kim’s meeting, news anchor Ri Chun Hee informed the nation that Kim had landed in Singapore, and called the summit a “historical first” that is “garnering the attention and hopes of the entire world.”