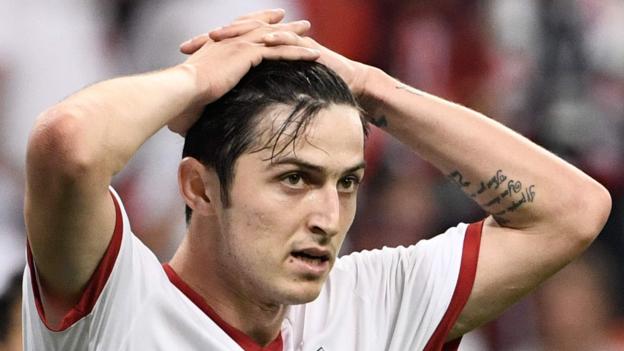 Iran World Cup striker Sardar Azmoun has retired from international football at the age of 23, claiming his mother has become seriously ill because of the insults he has received.

Azmoun – nicknamed the ‘Iranian Messi’ – had scored 23 goals in 33 games for his country before the tournament.

He did not find the net in Russia as Carlos Queiroz’s side finished third in Group B behind Spain and Portugal.

Azmoun described his decision to stop playing for Iran as “painful”.

He scored 11 goals in 14 games in qualifying and played the full 90 minutes in all three group games in Russia as Iran beat Morocco, lost to Spain and drew with Portugal.

However, Azmoun said the criticism he had received had made his mother ill.

“My mother had overcome a serious illness and I was happy,” said Azmoun, who plays his club football in Russia for Rubin Kazan.

“Unfortunately because of the unkindness of some people, and the insults that me and my team-mates in no way deserved, her illness has become severe.

“This has put me in a difficult position where I must pick one or the other – and as a result I pick my mother.”

Azmoun made his debut for Iran at the age of 19.

He is fifth on his country’s list of all-time top scorers and was compared to national hero Ali Daei, the record international goalscorer of all-time with 109 goals in 149 appearances.