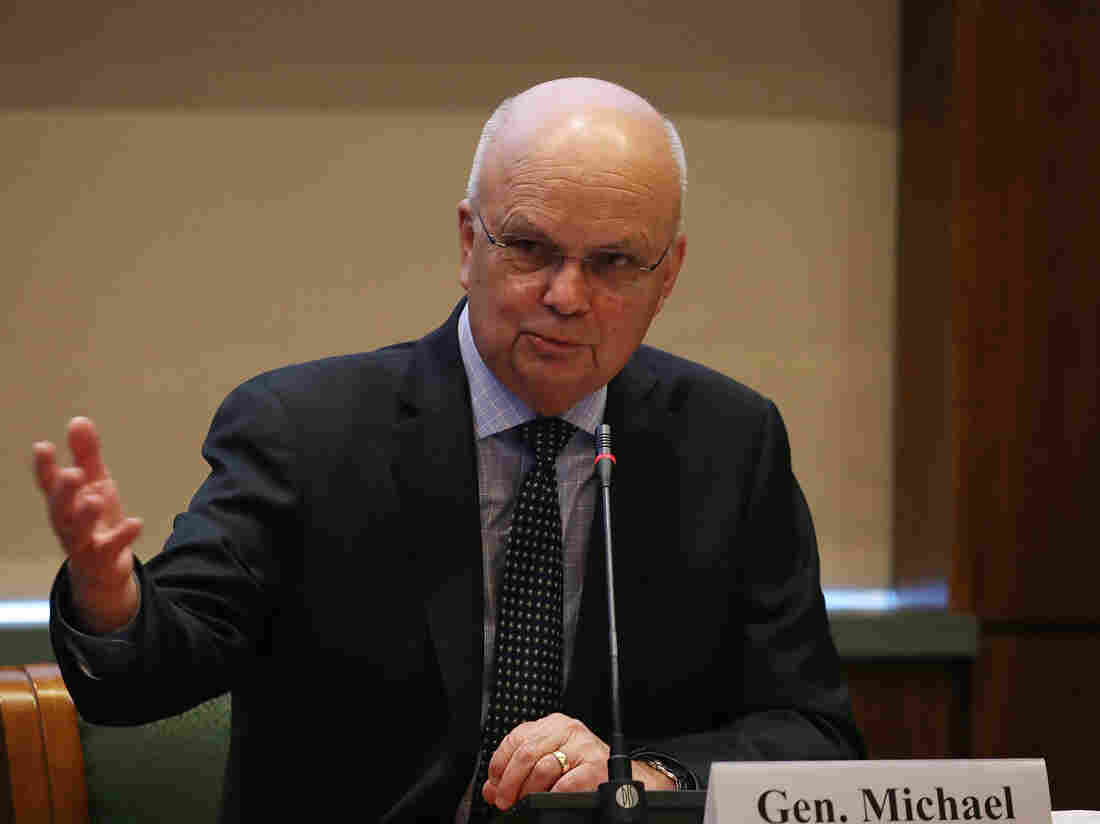 Former CIA director Gen. Michael Hayden delivers remarks on national security at the National Academy of Sciences in October. Hayden is among a growing number of former intelligence officials who are now speaking out regularly in retirement. Mark Wilson/Getty Images hide caption 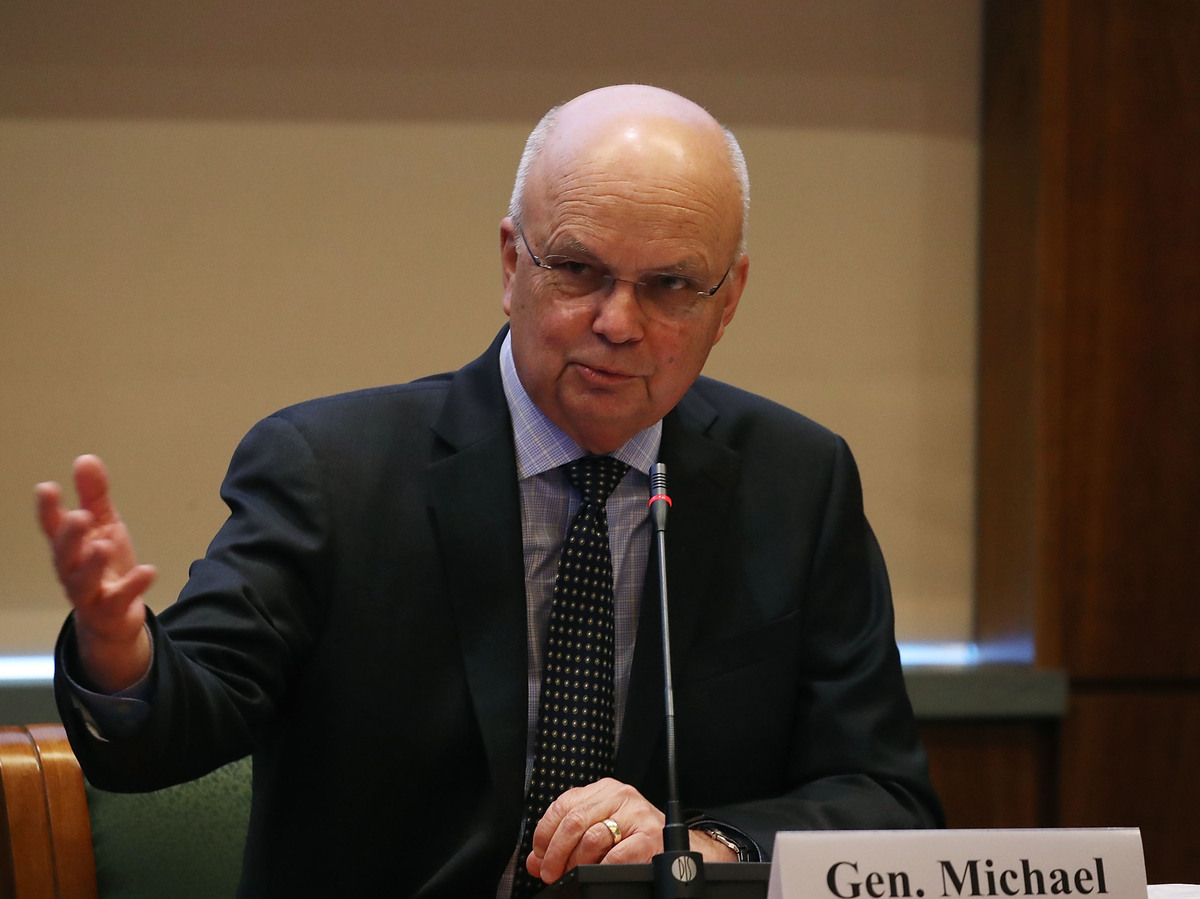 Former CIA director Gen. Michael Hayden delivers remarks on national security at the National Academy of Sciences in October. Hayden is among a growing number of former intelligence officials who are now speaking out regularly in retirement.

When Michael Hayden ran the CIA and the National Security Agency, his public comments were largely confined to congressional testimony. Now that he’s retired, “I’m on Twitter and I’m on CNN,” said Hayden.

He was also the featured guest as dozens of former national security officials and several current ones spoke at a recent conference on the threats facing the U.S.

A few journalists were also invited to the resort on Sea Island, Ga., where almost everything was on the record. Hayden and his former colleagues were OK with that.

Spies used to retire and fade away as quietly as when they were on duty. Now they go on cable TV. They write op-eds. They take to Twitter and criticize the president.

“Used to be when you retired from the Clandestine Service in the CIA, you had to stay under your previous cover,” said John Sipher, who has the perfect name for a spy. And that’s exactly what he was for nearly 30 years at the CIA.

“In recent years, retirees like myself have been able to, what we call ‘roll back cover,’ and be able to talk about some of the things we did,” Sipher added.

The conference was organized by The Cipher Brief, an online publication that features analysis from former spies like Frank Archibald, who addressed terrorism threats and rebuilding fractured Muslim countries during a panel discussion.

“That’s how the movie ends. Better governance and a better understanding of the soul of Islam,” Archibald added. “Otherwise, we’ll be campaigning [militarily] until our grandchildren grow gray.”

“What we’re really trying to do, and I think what we’ve done, is change the culture of agencies, of people who have been told their entire career, ‘Don’t talk to the media. The media are bad,'” she said.

The former spies are still hesitant to address some sensitive topics, like the CIA’s waterboarding campaign in the years immediately after the al-Qaida attacks of Sept. 11, 2001. They can conveniently — and accurately — claim that details of these matters remain classified, and therefore are off-limits for discussion.

But they are willing to discuss quite a bit, at least in broad terms.

For Hayden, a key moment was the 2013 disclosures by NSA contractor Edward Snowden, revealing the extent of the agency’s eavesdropping program, creating a firestorm of criticism about NSA practices.

Hayden, who ran the NSA from 1999 to 2005, said the agency had worked with the White House, Congress and the courts in developing the programs. But it didn’t share anything with the public until it was forced to do so by the scandal.

In his view, that was a big mistake.

“Hence you see an awful lot of folks like me, within the bounds of classification, trying to describe to the broader public what it is we do, and why, so as to get their understanding and, if not their enthusiastic approval, at least their acceptance,” Hayden said at the Cipher Brief conference.

President Trump has raised doubts about the intelligence agencies and their findings regarding Russia’s meddling in the 2016 election.

As some retirees fire back, it raises questions about their long tradition of neutrality.

John Brennan, an ex-CIA chief, has tweeted just 25 times. Yet he’s amassed more than 220,000 followers by lambasting the president in comments like this one below, unleashed last month, when FBI official Andrew McCabe was fired.

When the full extent of your venality, moral turpitude, and political corruption becomes known, you will take your rightful place as a disgraced demagogue in the dustbin of history. You may scapegoat Andy McCabe, but you will not destroy America…America will triumph over you. https://t.co/uKppoDbduj

“Since I served in Russia, was aware of Mr. Steele, and know how the Russian intelligence services worked, a number of people reached out to ask questions,” Sipher said.

A CIA spokesman stresses that no employee — active or retired — can divulge classified information. And anything they write must been approved in advance by the agency’s Publication Review Board. But Sipher and others have found themselves in new territory.

“How do you talk to reporters? How do you go on television? And the answer was a joking, ‘They don’t really have a process. We assume that you sort of understand where the line is,” he said.

You can expect to hear more from the former spies. Several former CIA chiefs appear on television these days. And one of them — Michael Hayden — has a new book coming out this week.