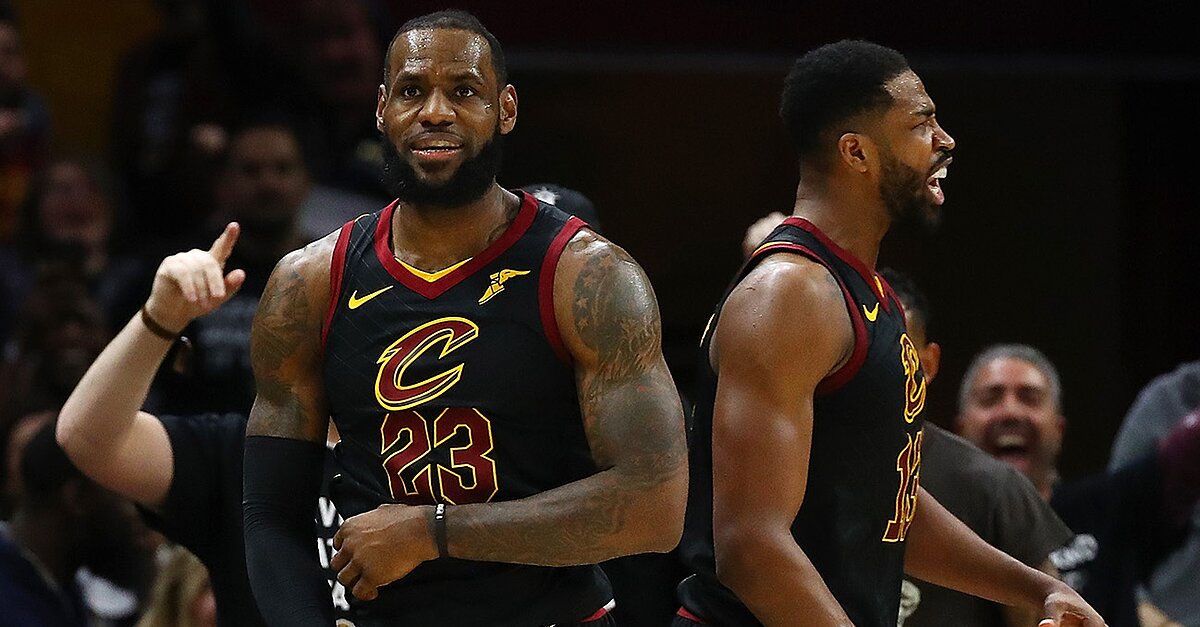 CLEVELAND—In the heat of Game 7, LeBron James disappeared. He vanished down the tunnel with a trainer in tow, and his team’s lead—once as large as 14 points— was all but gone. This was the first time that James had exited the game since it began. And if the larger trends of the series offered any indication, the whole thing—and Cleveland’s season—could be effectively over by the time he returned.

The first round had been a systematic demonstration of all that the Cavaliers lack. They were blown out in their minutes without LeBron on the floor over the first six games because their offense made such little sense without him. The want for stops only intensified in his absence, and yet Cleveland faltered in its matchups without a versatile, do-it-all forward around to paper over what gaps he could. This exact premise is what had failed the Cavaliers throughout the series. Every minute without James on the floor—and every possession in which he wasn’t directly involved—had come at a cost.

Game 7 proved a timely exception. No single player in the lineup for Cleveland had played a dependable series. Kevin Love shot terribly throughout. George Hill was making his return to action after a back injury. Larry Nance Jr. and Jordan Clarkson had played inconsistently, at best. Jeff Green was Jeff Green. Yet together, in the most important minutes of their season, that group rallied to not only survive LeBron’s absence, but to build the lead in spite of it.

At one point, James was stationed at the scorer’s table, ready to return—until a three-pointer from Love encouraged him to ride out the run from the bench. “We was able to get stops, too,” James said. “That helped. That helped out a lot.” In almost five minutes of action, those supporting Cavs—fairly maligned through what had been a trying series—increased the lead from two to eight. Cleveland would go on to win by four, 105-101, to stave off the Pacers and save its season.

The magnitude of those minutes cannot be overstated. Indiana is an unyielding opponent; it would not stop until every chance had been exhausted, and it would not be awed by James upon his return. This was its window. A few great minutes could steal a series once thought impossible to win. “That was an opportunity that we needed to take advantage of,” Pacers coach Nate McMillan noted. “And we didn’t.”

For all the narrative heft of Cleveland’s playoff run, its ultimate fate may be decided in these sorts of moments. The difference between LeBron’s relief and resentment came from a Green post-up, a Love jumper and Hill’s ability to bait defenders into fouls. Had those plays gone another way, the entire night would be overwhelmed by talk of James’s free agent future. The end was that close—and by virtue of playing in a Game 7, that conceivable.

“Your mind is thinking … could this be it?” James confessed. “That’s just human nature. And then the other side of my brain was like, ‘Let’s go make something happen.'”

To the surprise of absolutely no one, James did. Both before and after his sojourn in the locker room (to deal with a “minor injury,” per James, described as muscle cramps by ESPN’s Doris Burke), LeBron delivered. His work from the right block manufactured layups when needed, and open three-pointers when the Pacers dared to double team him. Down the stretch, James spent time on both sides of the pick-and-roll—sometimes initiating opposite Love or Kyle Korver, and sometimes rolling to the rim off of Hill’s playmaking. James had more help in this game than in any all series. Still he scored 45 points, grabbed nine rebounds and notched seven assists—all crucial.

“He did what he always does,” Victor Oladipo said of James. “It’s not really shocking. He’s the best in the world. He did what the best does.”

That, as the Pacers found throughout this series, goes beyond what even tough, well-executed defense can handle. It took eight attempts before James even missed a shot in Game 7. Before the night was through, he would score over an array of defenders in almost every possible way. On the rare occasion that he missed, Cleveland scrapped to rebound 36% of its own misses, turning the collapsing defense around James into yet another positive opportunity.

This is where Tristan Thompson made his unlikely mark. The Cavs’ former starting center had logged 23 total minutes in the first six games of this series, many of which came in garbage time. On Sunday, he joined the starting lineup (in place of point guard Jose Calderon) and played 35. His presence introduced a chaotic element that challenged the Pacers’ rotation.

“You know, now you’re trying to defend LeBron,” McMillan said. “At times, you’re sending double teams. You’re trying to cover the perimeter, and now you’ve got Thompson in there, in the middle, who is just aggressive. You need two guys so it puts pressure on the defense when you’re trying to help in other areas and Tristan is on the boards, pounding you, giving them extra opportunities.”

For minutes at a time, these looked like the Cavs of old. And then the Pacers would come storming back, their every drive reminding of just how much the gap in the East has narrowed. This was easily the Cavs’ best, most complete game of the series. They nearly lost.

“They definitely pushed us,” James said. “They pushed us to the brink, basically.”

And there the Cavs will stay. This was a triumphant moment for Cleveland’s supporting cast, but what they have to offer on a nightly basis remains an open question. In years past, James had the support necessary to elevate his best efforts. A call this close was an unthinkable first-round outcome. No round-one opponent had ever pushed LeBron to a Game 7 until these Pacers, who played well enough to send the Eastern Conference favorites home a month early. Even better opponents will follow, each demanding something new.

At some point, even James will tire from it. In seven games he has already logged 288 playoff minutes, pushing and pushing to satisfy Cleveland’s need for more. It won’t cease against the Raptors, whom the Cavs have no right to look past. What made the solid play of LeBron’s teammates so vital in Game 7 was that their positive influence had become rare. This, spectacular as it was, stands as an exception to the rule.