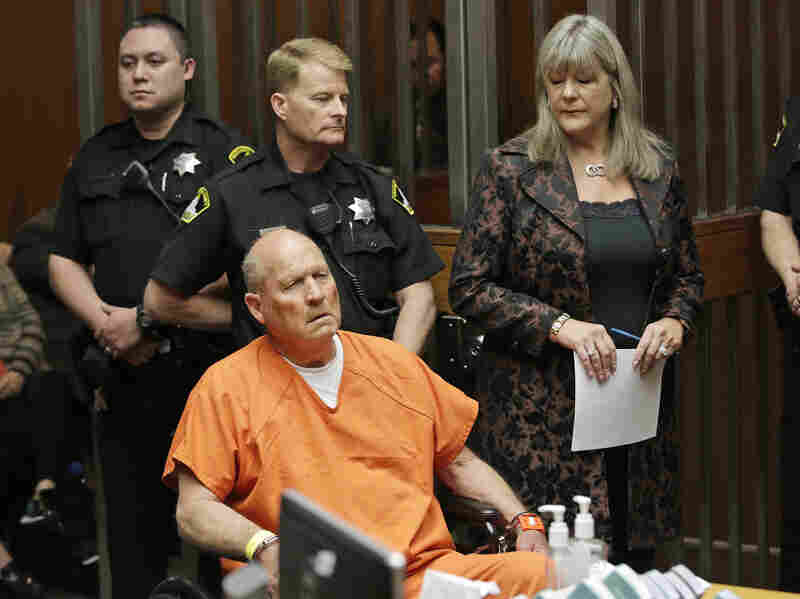 Joseph James DeAngelo, who authorities suspect is the so-called Golden State Killer responsible for at least a dozen murders, is arraigned in Sacramento, Calif., on Friday. Rich Pedroncelli/AP hide caption 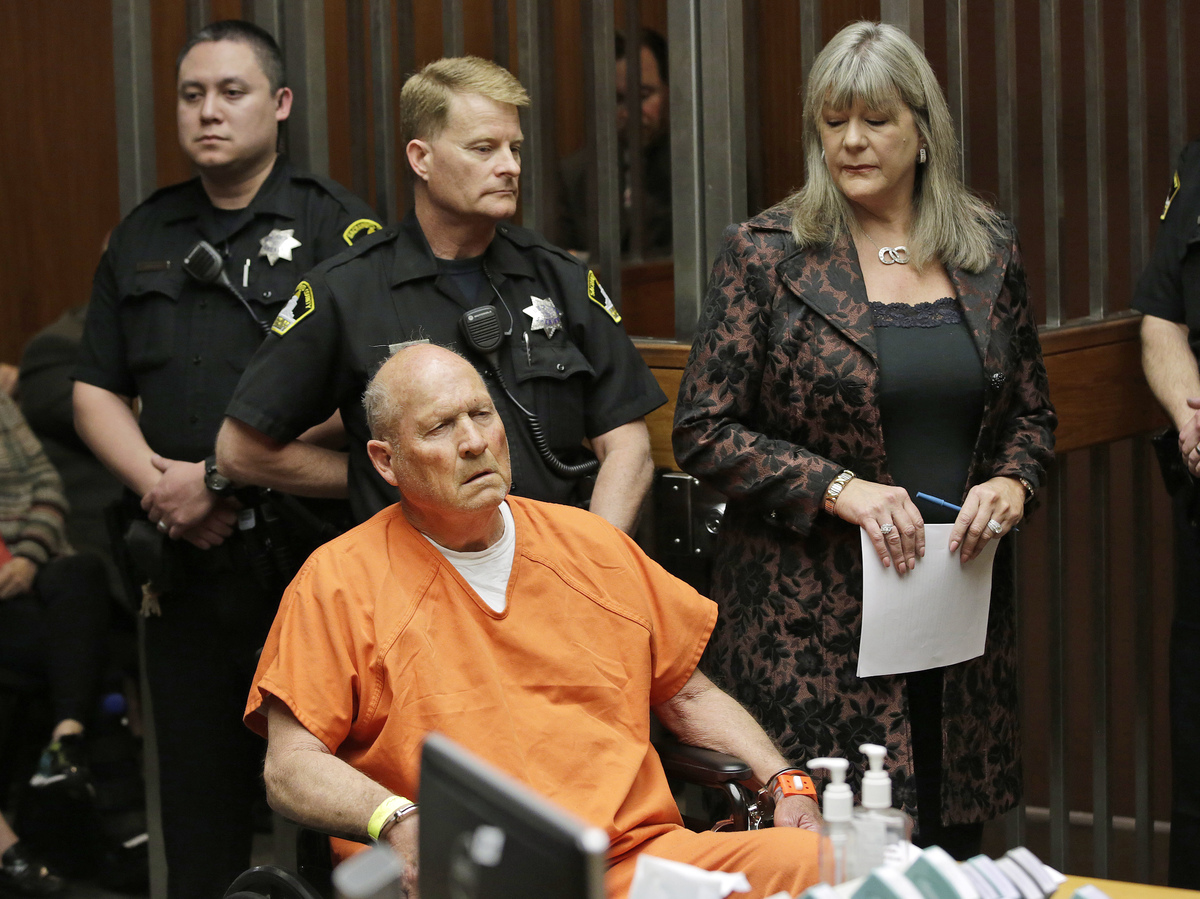 Joseph James DeAngelo, who authorities suspect is the so-called Golden State Killer responsible for at least a dozen murders, is arraigned in Sacramento, Calif., on Friday.

As they sought a breakthrough in the cold case of the man known as the Golden State Killer and the East Area Rapist, law enforcement officers pursued new avenues to find a DNA match. The man’s last known crime was in 1986, when forensic use of DNA technology was just beginning.

His methodical tactics had suggested the killer might have law enforcement experience, a former deputy told The Associated Press. But in committing his terrifying crime spree, he left behind a lot of genetic material.

The FBI operates a central DNA database, and police departments across the country have started compiling their own. Investigators used the DNA evidence to create a profile of the killer, Holes said, but it didn’t match any of the samples in criminal DNA databases, the San Jose Mercury News reports.

So they turned to a no-frills site used by genealogists: GEDmatch.com.

“We were able to generate a DNA profile we uploaded into [a] … database of other similar types of profiles,” Holes told KGO. “And then from there, we get a match list of how much DNA these various other individuals share with the crime scene DNA. And the more DNA that they share the more closely related they are.” 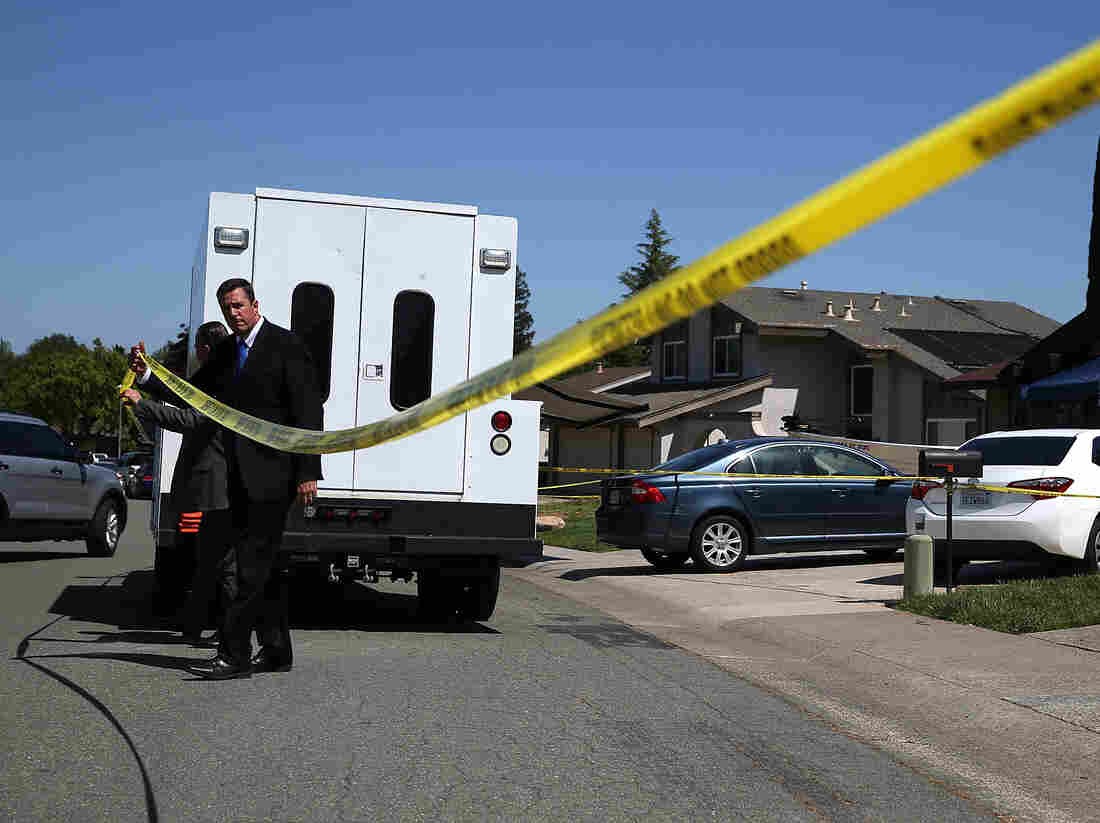 Law enforcement officials leave DeAngelo’s Citrus Heights, Calif., home on Tuesday. Investigators say they zeroed in on DeAngelo using DNA that matched with a relative of his on a genealogical website. Justin Sullivan/Getty Images hide caption 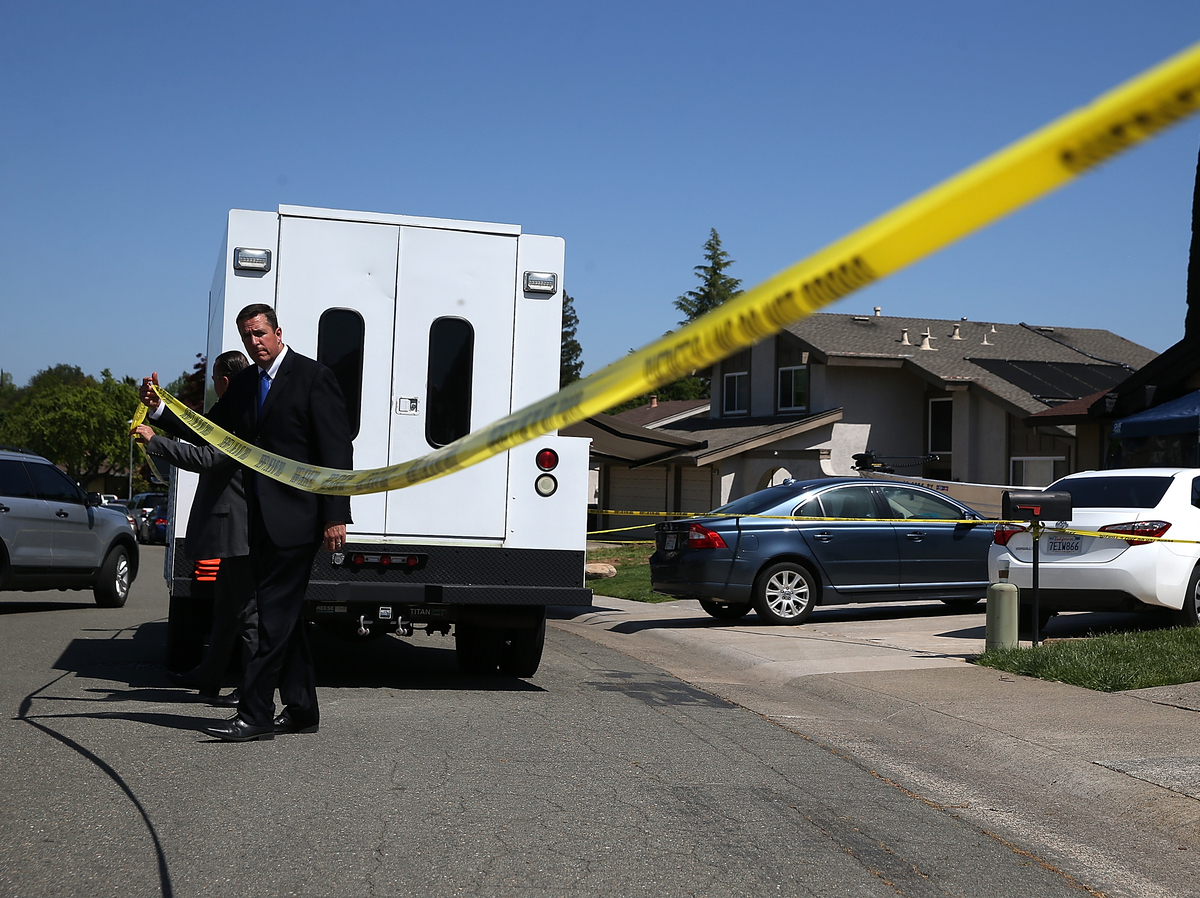 Law enforcement officials leave DeAngelo’s Citrus Heights, Calif., home on Tuesday. Investigators say they zeroed in on DeAngelo using DNA that matched with a relative of his on a genealogical website.

On GEDmatch, anyone can create an account, upload raw DNA data and find other profiles that match to varying degrees. Users have the option of using aliases, but not all do so. The site’s policy statement warns that the company can’t promise absolute security or privacy.

On Friday, the site’s operator, Curtis Rogers, posted a message to users:

“We understand that the GEDmatch database was used to help identify the Golden State Killer. Although we were not approached by law enforcement or anyone else about this case or about the DNA, it has always been GEDmatch’s policy to inform users that the database could be used for other uses, as set forth in the Site Policy …. While the database was created for genealogical research, it is important that GEDmatch participants understand the possible uses of their DNA, including identification of relatives that have committed crimes or were victims of crimes. If you are concerned about non-genealogical uses of your DNA, you should not upload your DNA to the database and/or you should remove DNA that has already been uploaded.”

Holes told the Mercury News that GEDmatch had been the team’s best tool, and that they hadn’t needed a court order to access the site’s database.

GEDmatch does not “hand out data,” Rogers told the AP. “This was done without our knowledge, and it’s been overwhelming.”

Chief Deputy District Attorney Steve Grippi said that the DNA used to zero in on DeAngelo had been uploaded by a relative, according to NBC affiliate KCRA.

Investigators then used the results to explore family trees and find men who fit the profile of the Golden State Killer — roughly the right age and height and living in California when the crimes took place.

Just a month ago, Holes was sitting in his car outside DeAngelo’s house in Citrus Heights, trying to decide what to do. His retirement was the next day.

“[DeAngelo] had become interesting to me to a point where I felt I needed to go see where he lived,” Holes said. “I literally parked across the street on the curb looking at his house just kind of taking in the neighborhood. … What’s the likelihood that this is the guy? And I even considered, I should just knock on his door. I’m here, I drove all this way. Just talk to him, get a quick interview, ask if you’d give a consent DNA sample, and say ‘Thank you very much, sir’ and leave. And I just don’t know enough about him, and that’s when I decided, I gotta drive away and we need to find out more.”

Officers began to watch DeAngelo’s movements, and they picked up a discarded item that had his DNA on it.

From there, things happened quickly.

“We were able to get a result in about four hours,” Sacramento County Sheriff Scott Jones told KCRA. “That was unheard of just 10 years ago.”

The number of people who have had their DNA analyzed has increased dramatically in recent years: The two leading companies alone have reportedly tested 10 million people. But all those people shipping off a tube of saliva for testing don’t necessarily think of all the ways their data could be used.

“People who submit DNA for ancestors testing are unwittingly becoming genetic informants on their innocent family,” Steve Mercer, the chief attorney for the forensic division of the Maryland Office of the Public Defender, told the AP. He added that they “have fewer privacy protections than convicted offenders whose DNA is contained in regulated databanks.”

Two of the leading consumer DNA analysis services, Ancestry and 23andMe, told NPR they were not involved in the DeAngelo case.

“Ancestry advocates for its members’ privacy and will not share any information with law enforcement unless compelled to by valid legal process,” the company said in a statement. From 2015 through 2017, Ancestry received no valid legal requests for genetic information, it said.

A spokesman for 23andMe said the company has never given customer information to law enforcement officials. (23andMe is a financial supporter of NPR.)

“Broadly speaking, it’s our policy to resist all law enforcement inquiries to protect customer privacy,” the company said in a statement. “Our platform is private, and does not support the comparison of genetic data processed by any third party to genetic profiles within our database. Further, we do not share customer data with any public databases, or with entities that may increase the risk of law enforcement access.”

DeAngelo made his first court appearance Friday in Sacramento. So far, he has been charged with eight murders, but he is suspected of a dozen killings, 45 rapes and more than 120 burglaries.

Holes said he was glad he didn’t knock on DeAngelo’s door that day, as events might have taken a violent turn. He said it was frustrating to spend those years tracking the killer, knowing the man he sought was probably living a normal life: “And every day that went by … he’s getting away with it.”

Holes said it was a good feeling to see DeAngelo in the interview room after his arrest, “utterly defeated.”