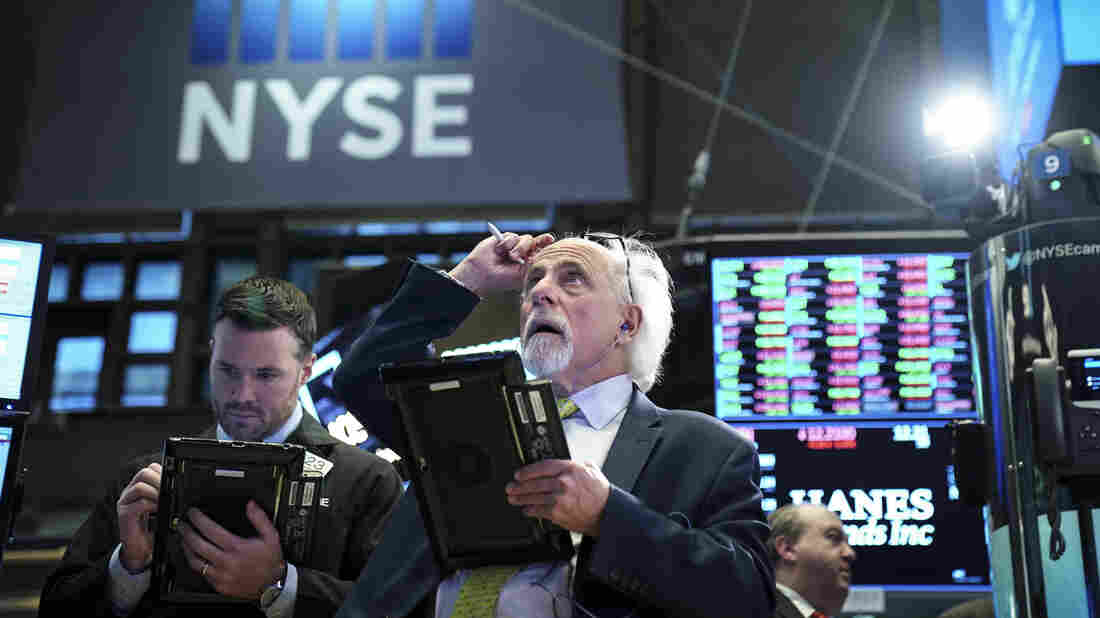 Traders and financial professionals work on the floor of the New York Stock Exchange after yet another bout of the recent stock market volatility. Drew Angerer/Getty Images hide caption 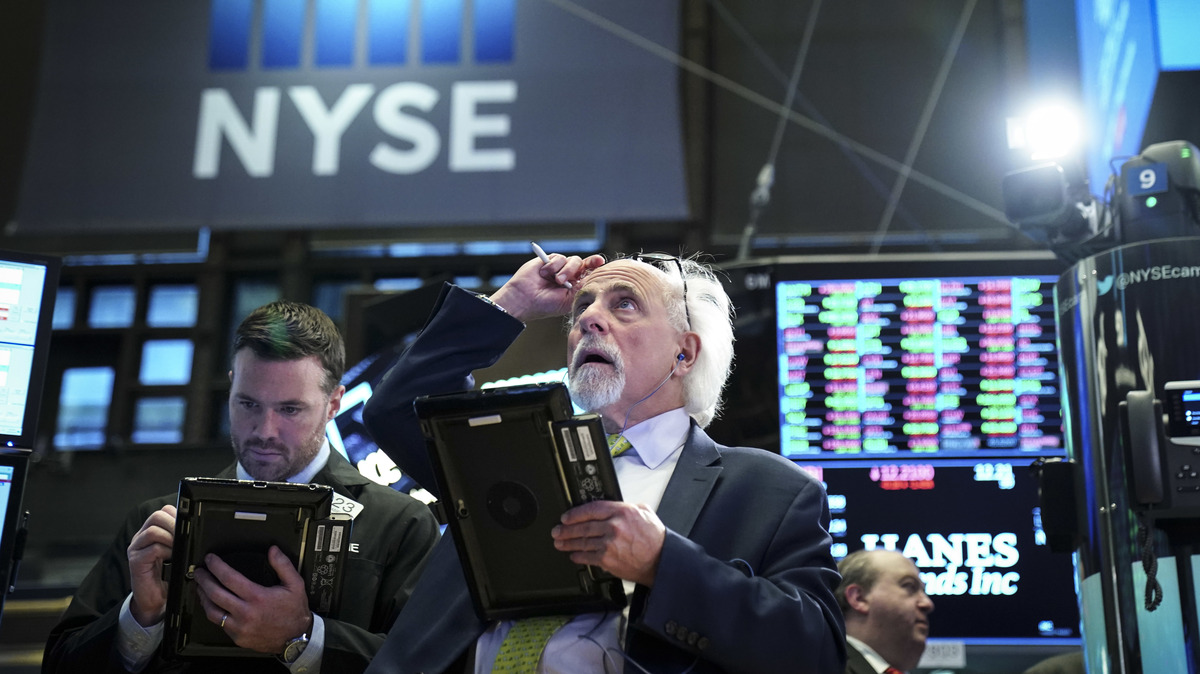 Traders and financial professionals work on the floor of the New York Stock Exchange after yet another bout of the recent stock market volatility.

It just might be time to start thinking about a recession.

Not a recession in the immediate future, of course. The latest jobs report was unexpectedly strong, and the economy is growing at a good clip.

But there’s reason to get nervous. A majority of economists surveyed by the Wall Street Journal predict a recession by the end of 2020, and a majority of Americans appear to have the same fear.

Then there’s the yield curve — a measure of how much of a return U.S. debt is paying out. That curve happens to be a good predictor of recessions, and it’s flashing, if not red, then yellow right now.

But even if a recession isn’t coming next month, it’s never too early to start thinking about how prepared the country is. And there’s a good case to be made that the levers that we usually pull to stop a recession either won’t work this time, or won’t work as well as they have in the past.

The first tool to fight a recession: monetary policy.

But it might not work all that well this time. Here’s why: The Fed uses an interest rate called the federal funds rate as a sort of accelerator pedal. Lowering it causes other interest rates in the economy to drop. The idea is to encourage more borrowing, more economic activity — speed things up.

“Just for context, if you go back and think about typical recessions, the Fed generally cuts interest rates by four or five percentage points in the typical downturn,” Zandi said.

This is what happened in the last recession. Just as it started, the federal funds rate was at just over 5 percent, and the Fed soon dropped it to around zero. It stayed there for seven years — a measure of how long that recovery was.

Since the Fed started raising it again, that interest rate has only gained so much altitude.

“Right now, the interest rate that they control is at two and a half percent, so that just indicates how little cushion room they have to maneuver here,” Zandi said.

This isn’t the only tool in the Fed’s toolbox, of course. After the last recession, the central bank also bought up huge amounts of assets, like treasury bonds, in a policy known as quantitative easing (which came to be known by the shorthand “printing money”).

The problem, however, is that quantitative easing similarly has limited room to help right now.

“They could do it. The question is how effective will it be,” Zandi said. “I mean, the way quantitative easing works is it really is another way to lower interest rates — in this case, long-term interest rates.”

Those are also relatively low, with the benchmark rate below three percent, quite a bit lower than it was just before the last recession.

If monetary policy doesn’t do the trick, it may be time to spend. The U.S. tried this during the Great Recession by passing a large stimulus package, and it did help to soften the blow.

But there’s a potential problem with trying that now: The federal government has a lot of debt right now — about twice as much, relative to GDP, as there was before the last recession.

And it’s only projected to go up in the future, for a lot of reasons: Entitlements will only get more expensive, especially as baby boomers get older and go on Medicare. The 2017 tax cuts are also projected to add significantly to the debt.

“We just don’t have the financial cushion that we have historically, and investors are going to demand compensation for the greater risk that they’re taking,” Zandi said. “That means higher interest rates.”

A couple of big caveats here: One is that this doesn’t mean that there’s no cushion. Right now, investors are fine, as Brookings’ David Wessel recently noted.

On top of that, economists differ widely on how much of a threat debt is to the economy.

But even thinking about this is putting the cart before the horse here, because we’re assuming that Washington could even agree on what to do in an economic crisis.

In addition, the fear of adding to deficits could hold some lawmakers back from supporting stimulus — even if that stimulus might not threaten the economy.

“We can’t even keep the government open, and can these guys get it together long enough to actually come up with something to help out the economy if we really need that help?” Zandi said. “So there isn’t a lot of room here if we do get into a kerfuffle. The economy is going to have to perhaps do it on its own.”

One recession buffer: the private sector

As far as the economy “doing it on its own,” there is reason to worry about how that might go.

One potential trouble spot is with corporations. Former Federal Reserve Chair Janet Yellen has been warning that companies that have taken on too much debt could worsen any downturns.

Zandi elaborated: “These so-called levered companies are very exposed if the economy were struggling. In many cases, the loans they’ve taken out are loans that are tied to market interest rates.”

And if those interest rates rise, that gives those businesses a tough choice to make.

“‘Do I make my debt payment or do I cut investment in jobs?'” Zandi said. “They’re very likely to cut back on jobs and investment. So that just exacerbates the recession — the downturn will be more severe.”

There is one semi-bright spot, however: Households have much less debt than they did prior to the recession.

That said, there are a lot of households who would be on really shaky ground if a recession hit — for example, 4 in 10 Americans say they wouldn’t be able to come up with $400 in an emergency.

It’s not like there’s ever a great time for a recession. But if one comes in the next couple of years, it could be an extraordinarily bad time for it.