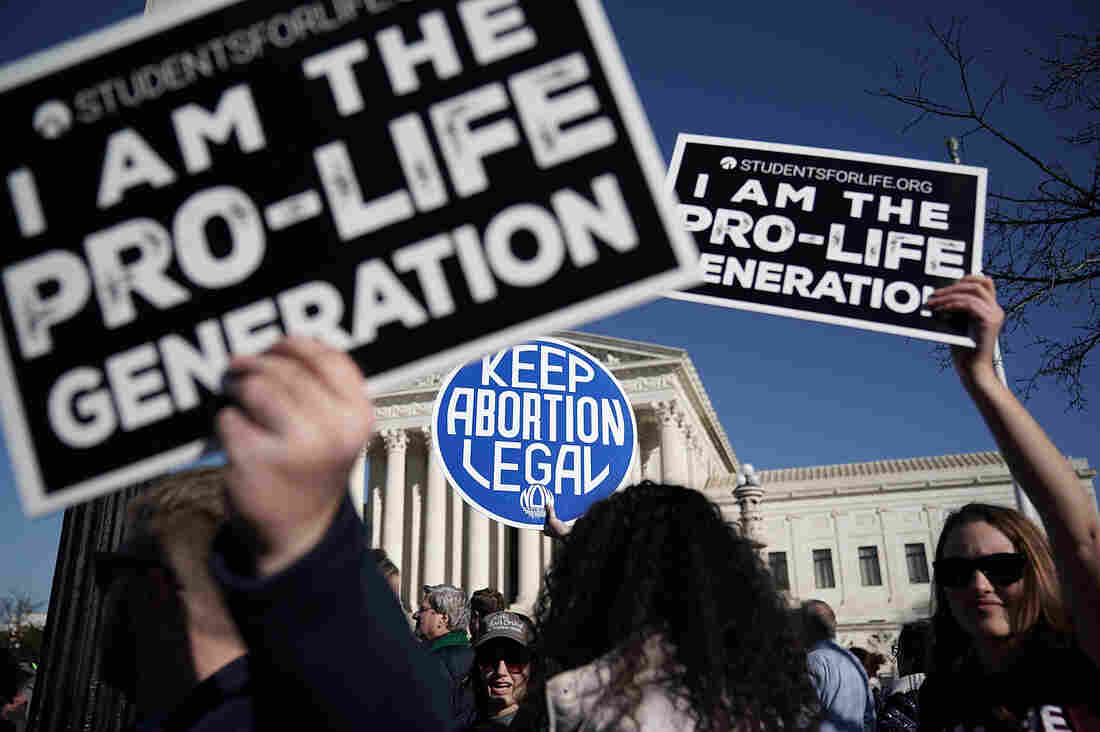 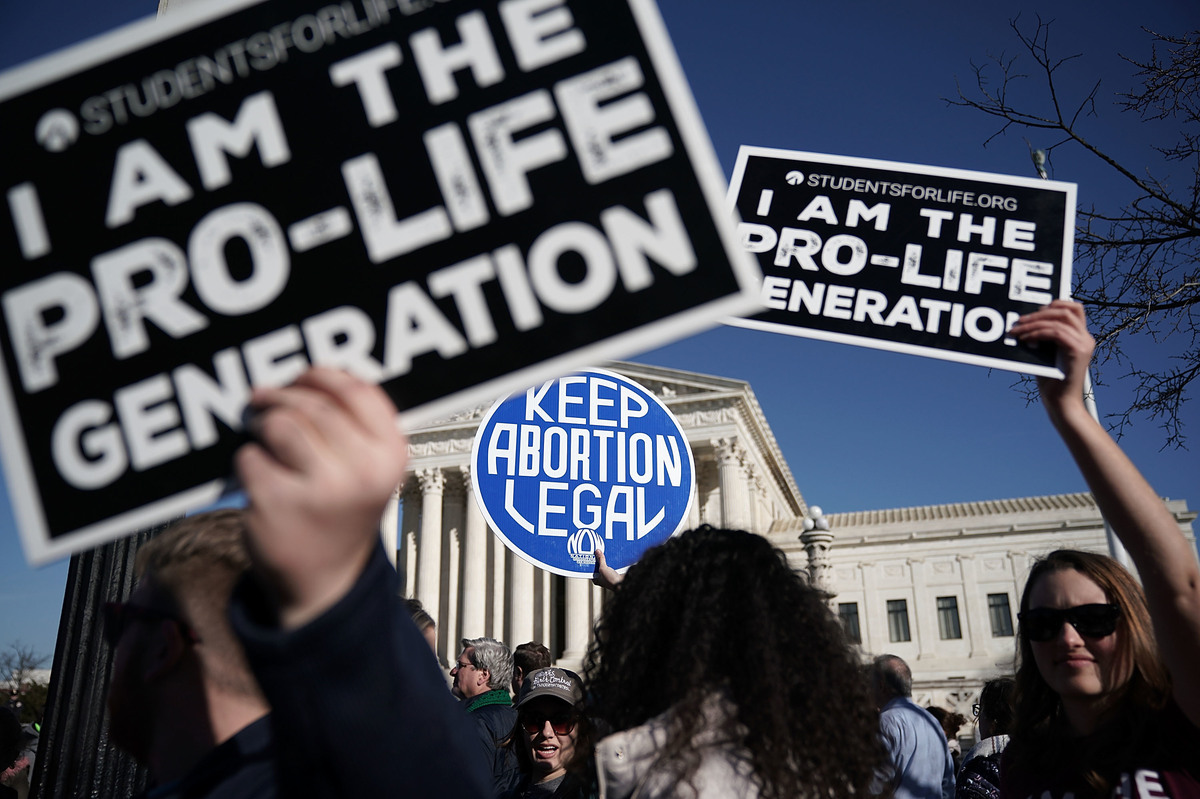 Activists outside the Supreme Court in January voiced their support for abortion rights nationwide.

What would the U.S. look like without Roe v. Wade, the 1973 case that legalized abortion nationwide?

Reversing the landmark case would not automatically make abortion illegal across the country. Instead, it would return the decision about abortion legality to the states, where a patchwork of laws are already in place that render abortion more or less available, largely depending on individual states’ political leanings.

“We think there are 22 states likely to ban abortion without Roe,” due to a combination of factors including existing laws and regulation on the books and the positions of the governor and state legislature, says Amy Myrick, staff attorney at the Center for Reproductive Rights, which represents abortion-rights advocates in court.

Kavanaugh never opined on Roe v. Wade directly during his tenure on the U.S. District Court in Washington, D.C. In his 2006 confirmation hearing for that position, though, he said he would follow Roe v. Wade as a “binding precedent” of the Supreme Court — which judges in lower courts are required to do.

Opponents of Roe v. Wade buoyed by the pick

“Judge Kavanaugh is an experienced, principled jurist with a strong record of protecting life and constitutional rights,” said a written statement from Susan B. Anthony List President Marjorie Dannenfelser. She spearheaded support for Trump in his presidential campaign after he promised to appoint to the Supreme Court only justices who would overturn Roe v. Wade.

Kennedy, by contrast, was a swing vote on abortion issues. He frequently sided with conservatives to uphold abortion restrictions. However, in key cases in 1992 and 2016, he sided with liberals to uphold Roe‘s core finding that the right to abortion is part of a right to privacy that is embedded within the U.S. Constitution.

Even now, with Roe v. Wade‘s protections in place, a woman’s access to abortion is heavily dependent on where she lives.

According to an analysis by the Guttmacher Institute, a reproductive-rights think tank, 19 states adopted 63 new restrictions on abortion rights and access.

Since 2011, states have enacted nearly 1,200 separate abortion restrictions, according to Guttmacher, making these types of laws far more common.

As of now, four states — Louisiana, Mississippi and North and South Dakota — have what are known as abortion “trigger laws.” Those laws — passed long after Roe was handed down — would make abortion illegal if and when the Supreme Court were to say Roe is no more.

“They are designed to make abortion illegal immediately,” says Myrick.

Another dozen or so states still have pre-Roe abortion bans on the books.

Some have been formally blocked by the courts, but not repealed. Those bans could, at least in theory, be reinstated, although “someone would have to go into court and ask to lift that injunction,” says Myrick.

States could simply begin enforcing other bans that were never formally blocked, like one in Alabama that makes abortion providers subject to fines and up to a year in jail.

At the same time, Myrick says, “there are 20 states where abortion would probably remain safe and legal.”

The path to the Supreme Court

Several major challenges to state abortion laws are already in the judicial pipeline. One of these will have to get to the Supreme Court to enable a majority to overturn Roe v. Wade.

“It’s not a question of if, it’s a question of what or when,” says Sarah Lipton-Lubet, vice president for reproductive health and rights at the National Partnership for Women and Families.

The first — and most likely type to result in the court taking a broad look at Roe v. Wade — are “gestational” bans that seek to restrict abortion at a certain point in pregnancy, says Lipton-Lubet.

One pending case, for instance, involves an Arkansas law that would effectively ban medication abortions. Finally, there are bans on specific procedures, including several in Texas, Arkansas and Alabama that would outlaw “dilation and evacuation” abortions, which are the most common type used in the second trimester of pregnancy.

Both Myrick and Lipton-Lubet agree that there is no way to predict which abortion case is likely to reach the high court first.

The case that’s actually closest to the Supreme Court, notes Myrick, is a challenge to an Indiana law that would outlaw abortion if the woman is seeking it for sex selection or because the fetus could be disabled. A federal appeals court found that law unconstitutional in April.

Many analysts also agree that even with the Supreme Court’s likely philosophical shift, Roe v. Wade might not actually be overturned at all.

Instead, says Lipton-Lubet, a more conservative court could “just hollow it out” by allowing restrictive state laws to stand.

“The court cares about things like its own legitimacy,” says Myrick, “and how often a precedent has been upheld in the past.” Given that Roe‘s central finding — that the decision to have an abortion falls under the constitutional right to privacy — has been upheld three times, even an anti-abortion court might be loath to overrule it in its entirety.

Julie Rovner is chief Washington correspondent for Kaiser Health News, a nonprofit news service, which is an editorially independent program of the Kaiser Family Foundation and not affiliated with Kaiser Permanente.