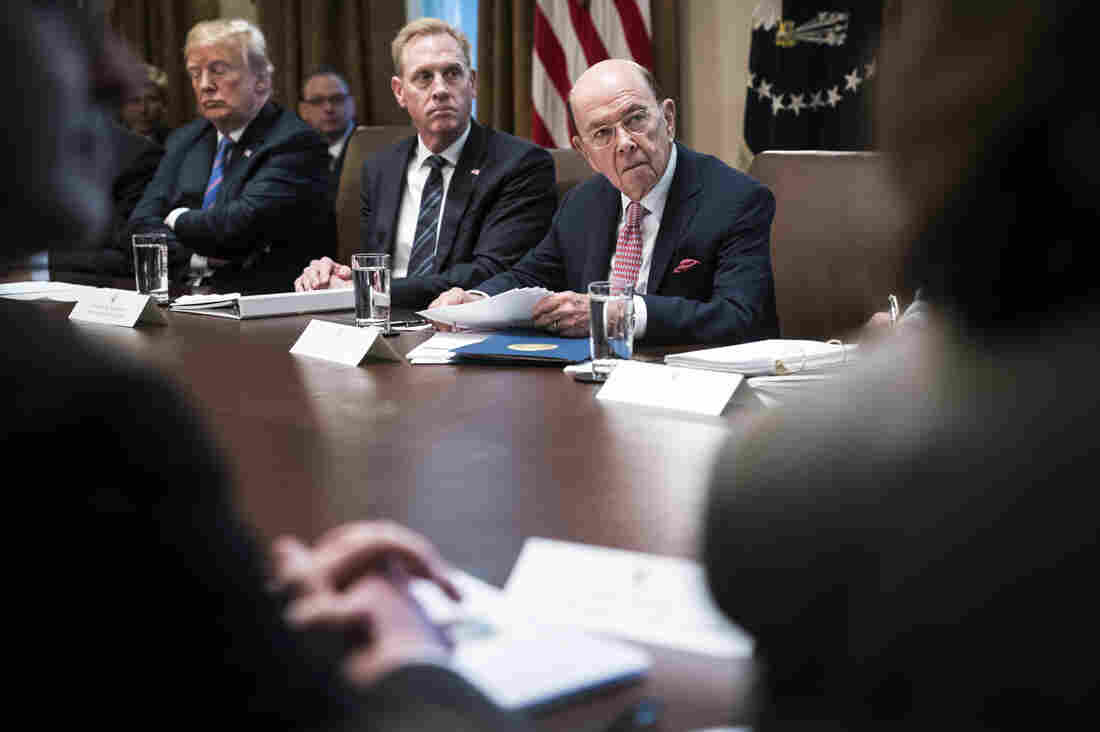 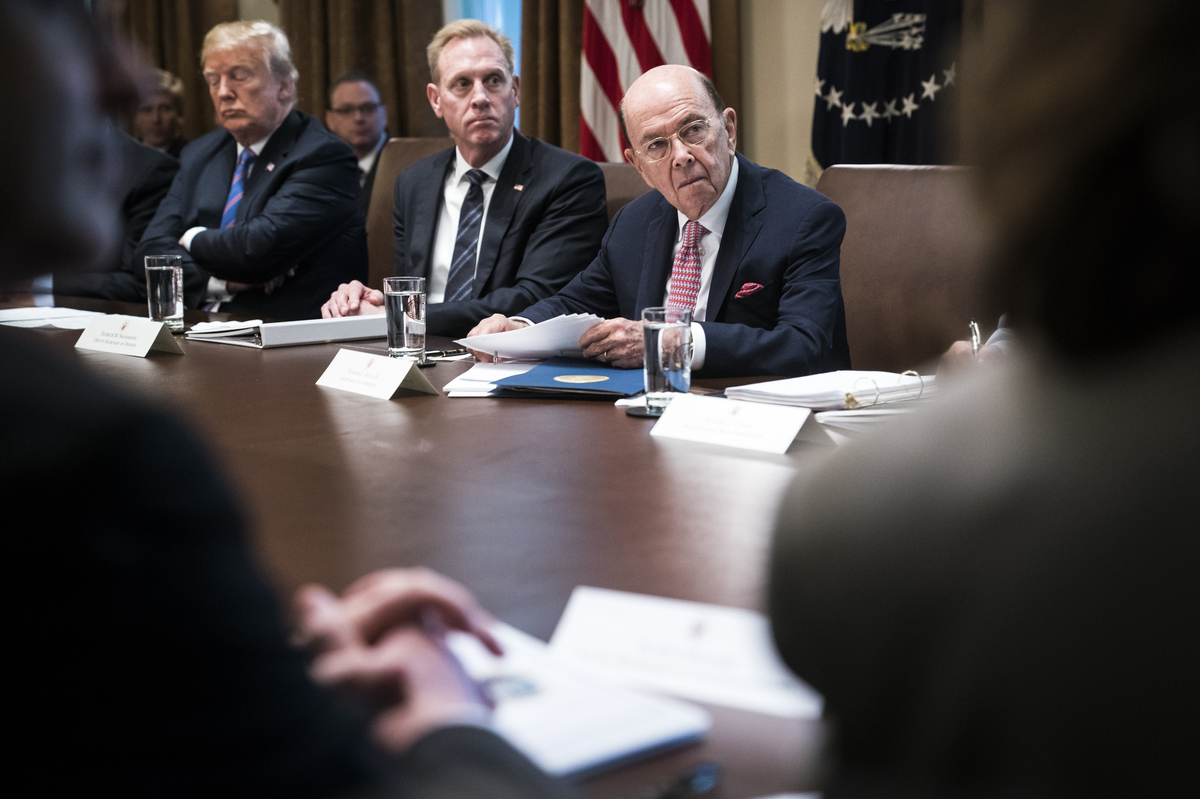 Commerce Secretary Wilbur Ross (right), who approved adding a citizenship question to the 2020 census, listens during a cabinet meeting with President Trump in the White House on July 18, in Washington, D.C.

Months before the Justice Department submitted a formal request for a citizenship question, pressure to add one to the 2020 census was mounting from a powerful decision-maker behind the national headcount: Commerce Secretary Wilbur Ross.

“Where is the DoJ in their analysis ? [sic]” Ross asked in a August 2017 email exchange discussing a citizenship question with Commerce Department official Earl Comstock. “If they still have not come to a conclusion please let me know your contact person and I will call the AG.”

Three days later, Comstock sent Ross “a draft memo” on a citizenship question that Comstock ultimately discussed with James McHenry, the head of the DOJ’s Executive Office for Immigration Review, and a Homeland Security official, according to a previously released memo prepared for Ross in September 2017.

Questions on the census continued to be top of mind for Ross for months, other emails suggest. After reminding Comstock in another August 2017 email that he had received “no update” on “the issue of the census question,” Ross followed up with Peter Davidson, the general counsel for the Commerce Department, about three months later.

“Census is about to begin translating the questions into multiple languages,” Ross wrote to Davidson in November 2017. “We are out of time. Please set up a call for me tomorrow with whoever is the responsible person at Justice. We must have this resolved.”

These revelations come from more than 7,500 pages of documents the Trump administration released Friday, as part of an order by U.S. District Judge Jesse Furman for the lawsuits over the citizenship question. They are the latest batch of court filings that have raised questions about why Ross approved adding a census question topic that the federal government has not asked all U.S. households since 1950.

These internal emails and a June memo released by Ross contradict the sequence of events that Ross has shared with lawmakers.

Ross has testified in Congress that the Justice Department “initiated” the request for the question in December 2017. The department says it needs responses to the question to better enforce the Voting Rights Act’s provisions against racial discrimination.

Asked by Rep. José Serrano, D-N.Y., if President Trump or anyone else at the White House directed him to add a question about citizenship status, Ross replied during a House Appropriations Commerce, Justice, Science, and Related Agencies Subcommittee hearing on March 20, “We are responding solely to the Department of Justice’s request.”

“The Secretary’s and the Census Bureau’s priority remains conducting a complete and accurate 2020 Census,” the spokesperson said in a written statement.

Previously released internal emails make clear that Ross wanted to add a citizenship question shortly after taking over the Commerce Department last February. Kris Kobach, the Kansas secretary of state who once helped lead Trump’s now-defunct commission on voter fraud, contacted Ross “at the direction of Steve Bannon,” the former White House strategist, about adding a citizenship question to the census, according to an email Kobach wrote to Ross’ chief of staff, Wendy Teramoto. Kobach suggested wording for a question that would ask about the immigration status of noncitizens, which Census Bureau officials have warned “will likely provide poor results and lead to claims that we are deliberately attempting to undercount populations and areas that contain undocumented immigrants.”

Responding to Ross’ frustrations with delays in adding a question, a Commerce Department official, Earl Comstock, wrote in a May 2017 email to Ross: “We need to work with Justice to get them to request that citizenship be added back as a census question.”

Ross announced his approval of the Justice Department’s request for a citizenship question in March, launching a total of six lawsuits from more than two dozen states and cities, plus other groups, that want the question removed.

Critics of the question worry that its presence on questionnaires for the 2020 census could depress the number of noncitizens who participate in the constitutionally-mandated head count of every person living in the U.S., regardless of citizenship status.

The Census Bureau currently asks about citizenship status on the American Community Survey, a yearly survey involving about one in 38 households. But research by the bureau suggests asking all U.S. households about citizenship status could discourage noncitizens from taking part in the national head count and harm the accuracy of the population counts used to redistribute congressional seats and Electoral College votes among the states once a decade.

Still, Ross overruled those warnings, as well as a suggestion by Census Bureau officials to forgo the question and instead compile existing government records about citizenship status. In a memo prepared for Ross, the bureau’s chief scientist said that alternative would be less expensive and produce more accurate citizenship data for Voting Rights Act enforcement.

On July 26, Judge Furman ruled that two of the lawsuits at Manhattan federal court can proceed to a potential trial that could start as early as late October. In his opinion, the federal judge wrote that Ross’ decision may have been “motivated at least in part by discriminatory animus and will result in a discriminatory effect.”

Furman, however, noted that the commerce secretary has “broad authority” over the census and that whether plaintiffs can prove in court that Ross used his authority unlawfully is still an open question.