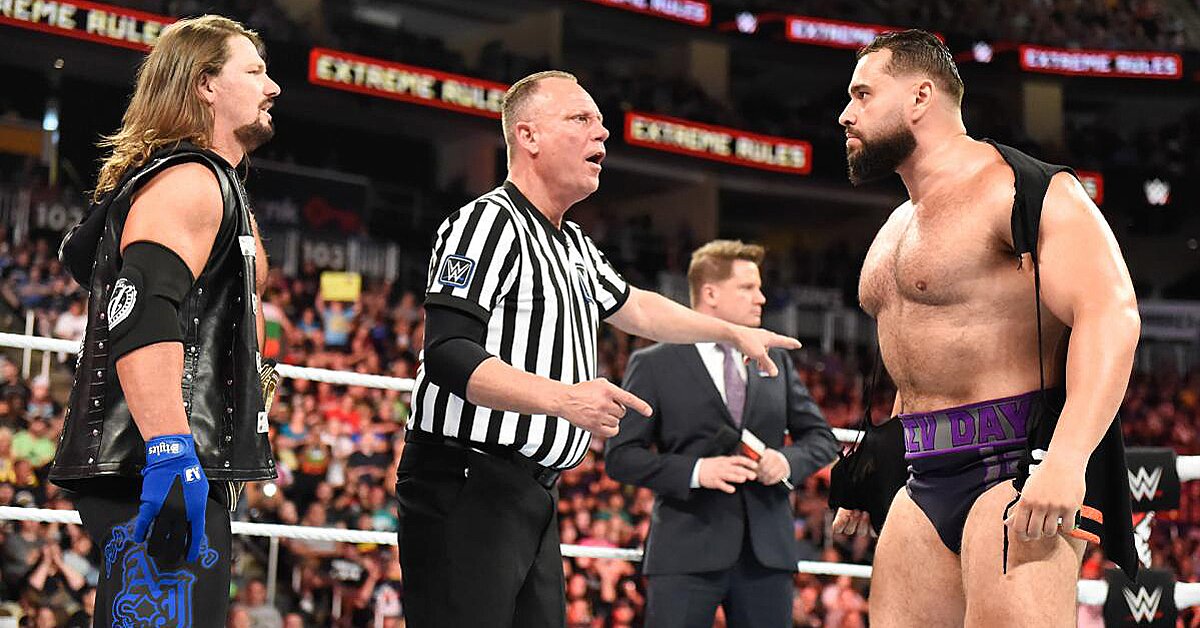 The Extreme Rules pay per view capped off a memorable day in wrestling history that began with the news that Hulk Hogan will be reinstated into the WWE Hall of Fame.

The day finished with Extreme Rules, which was a show that featured losses by Daniel Bryan, Roman Reigns, and Braun Strowman, as well as marked a fifth consecutive pay per view where WWE champion AJ Styles did not main event the show.

Extreme Rules included a new storyline about Universal champion Brock Lesnar, saw the return of Randy Orton, and continued the descent of Asuka, who lost again to Carmella and has lost considerable luster following her undefeated streak.

Here are the results:

·AJ Styles remained WWE champion with his win over Rusev

And here are my takeaways from the show…

1. All signs point to Brock Lesnar defending the Universal championship at SummerSlam against Bobby Lashley, with the possibility also remaining that Roman Reigns will be included to make the match a triple threat.

Raw general manager Kurt Angle gave the storyline explanation that Lesnar has chosen not to defend his title, but unless he agrees to terms on a title defense, he will be stripped of the Universal title.

Lesnar is not scheduled to appear on Raw this week, which means viewers will instead be treated to appointment-viewing as Paul Heyman speaks on the champ’s behalf. Lesnar is expected to drop the title at SummerSlam, and a singles match with Lashley makes the most sense considering he just defeated Reigns at Extreme Rules in a highly competitive match that was among the most entertaining on the card.

The match once again displayed Reigns’s ability to carry a compelling match. Considering Lesnar’s preference to work triple threat matches, especially in light of preparing for an upcoming UFC heavyweight title fight against Daniel Cormier, it would come as little surprise if Reigns is added to the SummerSlam main event.

2. Hulk Hogan did not appear at Extreme Rules, but he stole all the wrestling-related headlines throughout the day on Sunday with the news that, after three years as persona non grata, he will be reinstated by the WWE Hall of Fame.

Hogan was backstage at Extreme Rules and is rumored to return on Raw in Buffalo, New York. Although I think the crowd will respond favorably when “Real American” hits, there are still a number of fans who disagree with the decision to reinstate Hogan. The company would be wise to play a video capturing Hogan’s career, almost to serve as a reminder of why Hogan’s presence is so significant, before he reappears on Raw.

3. Braun Strowman’s chokeslam of Kevin Owens off the top of the steel cage and onto the broadcast table was the most incredible spot of the night.

Strowman lost the match, but the story was that his desire to inflict pain on Owens meant more to him than winning the match.

Brock Lesnar’s impending return to WWE is great news for Strowman, who currently holds the Money in the Bank contract and is my choice to leave SummerSlam as new Universal champion.

Harper pinned Bryan with a clean finish, despite the fact that the 51-year-old Kane was selling injuries from the pre-match attack by the Bludgeon Brothers.

I like to tell myself that this will all work itself out with Bryan eventually reclaiming the WWE championship.

Hardy is dealing with injuries, and the quick finish was a creative way to add heat to Nakamura, who has history with secondary titles. Nakamura is a five-time IWGP Intercontinental champion in New Japan Pro Wrestling and added considerable luster to that title (which is currently worn by nine-time WWE IC champ Chris Jericho), with his new goal to now deliver the most compelling U.S. title reign as a heel since Rusev dropped the belt to John Cena three years ago at WrestleMania 31.

Randy Orton made his return after the match, also delivering a groin shot to Hardy. It’s likely to happen after AJ Styles drops the world title, but the wrestling world is ready to embrace a well-developed storyline between Orton and Styles.

6. Asuka lost a match in under six minutes to Carmella.

The decision only served as a reminder that Asuka is an ordinary talent, which is not how she was booked during her 914-day undefeated streak that spanned her run in NXT and start on the main roster.

WWE has two money-drawing, main event-worthy matches in Ronda Rousey-Charlotte and Rousey-Asuka, so it is jarring to see the manner in which Asuka has been booked since WrestleMania.

7. AJ Styles wrestled a fantastic match with Rusev, which is to be expected, as is the fact that Styles—despite being WWE champion–did not close out the show as the main event.

For those keeping track, Extreme Rules marked the fifth consecutive pay per view (with WrestleMania 34, the Greatest Royal Rumble, Backlash, and Money in the Bank serving as the other four) for Styles as WWE champion where he wrestled but did not main event the show.

WWE has embraced Styles and clearly respects what he brings to the company, but despite putting Styles on the cover of WWE 2K19, is unwilling to fully invest in him.

8. Seth Rollins and Dolph Ziggler combined for a very entertaining main event, culminating in a sudden-death overtime win for Ziggler after a tense final 30 seconds of regulation.

The chance to work with Rollins, partner with Drew McIntyre and wear the Intercontinental title has rejuvenated Ziggler’s otherwise stagnant WWE career. One of the most compelling storylines in wrestling is whether Ziggler can again reach world champion status in the company.

9. Raw has been far from must-see television over the past three months, but that is not the case for the July 16 edition. Paul Heyman’s return, a potential Hulk Hogan video and advancing the story for Bobby Lashley, Roman Reigns, Braun Strowman, Dolph Ziggler, Drew McIntyre and Seth Rollins are all highly anticipated components of the show.