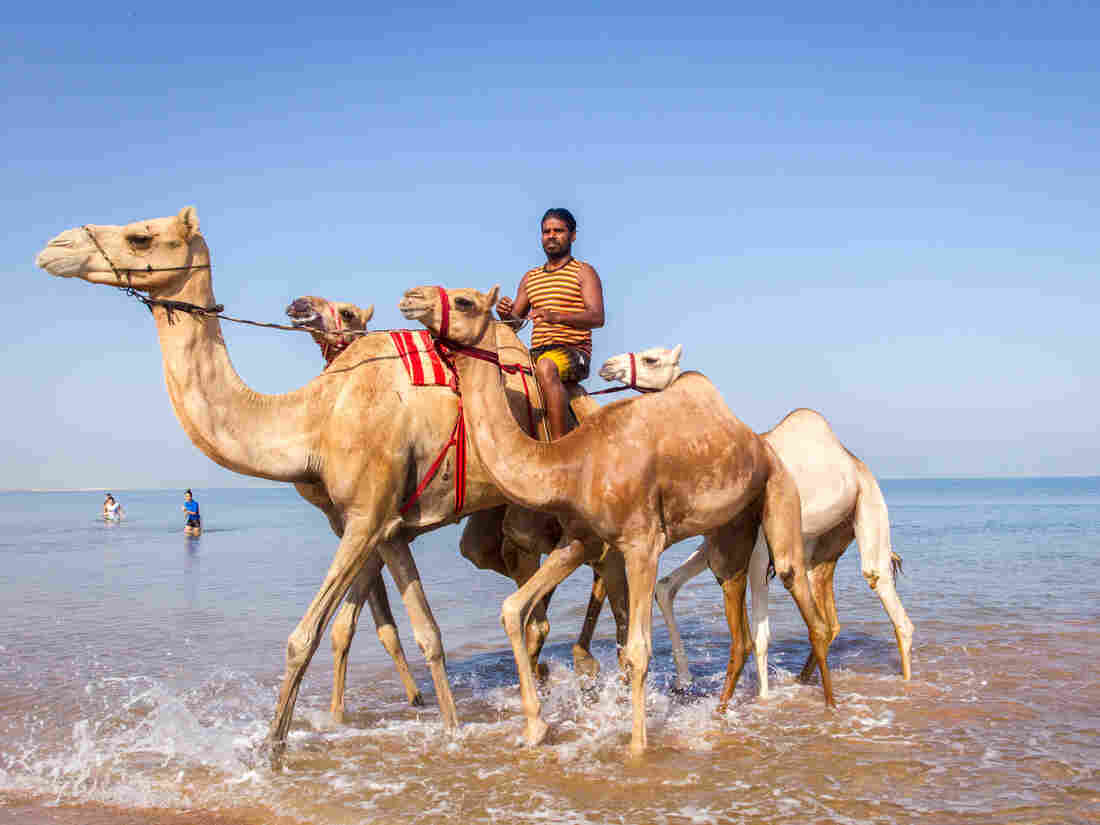 A camel handler rides his beasts out of the water after bathing them to get rid of ticks and fleas. Mike Hook/SOPA Images/LightRocket via Getty Images hide caption 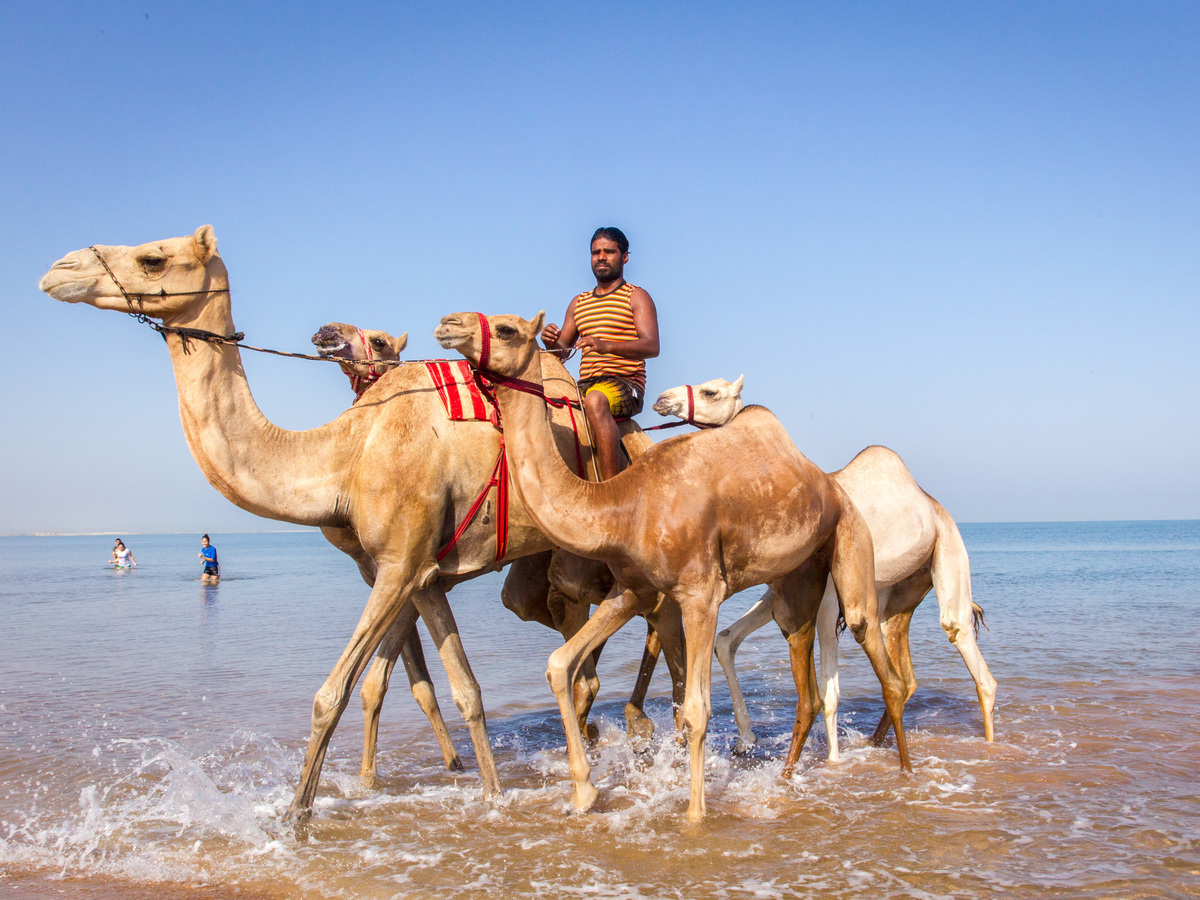 A camel handler rides his beasts out of the water after bathing them to get rid of ticks and fleas.

Earlier this spring, Saudi Arabia was put on high alert as the media reported an outbreak of Alkhurma hemorrhagic fever.

Goats and Soda jumped to cover the story. Hemorrhagic fevers, which include Ebola, are a frightening group of illnesses, and rightly so, for their ability to sometimes cause bleeding — from the eyes, nose, ears and other body parts.

But it turned out there actually had not been an outbreak of Alkhurma — a rare disease that has only been detected in Saudi Arabia and parts of northeastern Africa, including Egypt.

In an email to NPR, Saudi Arabia’s Ministry of Health said there have been no confirmed cases of Alkhurma hemorrhagic fever in the country this year. The ministry explained that an internal memo was released asking health-care workers in Jeddah to “stay alert and vigilant” for signs of the fever. Some reporters took that to mean that hospitals were being alerted to an outbreak.

Even though there’s no outbreak, we were still interested in learning about Alkhurma fever, named for the Saudi Arabia town where a sheep that spread the first case was from. We spoke with Dennis Bente, a specialist in tick-borne viruses at the University of Texas Medical Branch at Galveston, to find out more.

This interview has been edited for clarity and brevity.

Why haven’t we heard much about Alkhurma fever?

Firstly, the virus is a fairly new discovery; it was first detected back in 1995 in the Jeddah region of Saudi Arabia. The first six cases were slaughterhouse butchers who came down with a fever and unknown illness.

Secondly, there have only been a couple hundred cases of Alkhurma since its discovery. But some of them have been severe, and not everyone has walked away from the disease. The disease and the transmission of the virus is not fully understood, and we’re still trying to see what we can learn from those cases.

How are people infected?

Alkhurma is transmitted by ticks. Humans can be infected if they are bitten by a tick carrying the virus or if they crush it. Some studies show that contact with domestic animals or livestock carrying the virus may increase our risk of infection, most likely if we come in contact with the raw meat or blood of the animal. That is, if the blood gets into our eyes, mouth or any cuts in the skin.

What are the symptoms?

In the first phase there’s rapid onset of high fever, headache, muscle pain, diarrhea and vomiting. This can progress into a second phase, a more severe state with hemorrhagic symptoms like nose bleeds, bleeding from the gums or intestinal bleeding. [In some cases] the central nervous system is affected; some patients go into a coma and experience altered senses and convulsions. Up to 20 percent of the infections are fatal.

Is there uncontrolled bleeding?

People tend to think of the movie Outbreak when they hear “hemorrhagic fever.” They imagine patients bleeding profusely from their eyes, mouth and so on. In hemorrhagic fevers, bleedings don’t occur as often or are subtler than people think.

Alkhurma is a hemorrhagic fever, but it’s not that dramatic bleeding from orifices that we see in the horror movies.

What are the chances of a widespread outbreak?

Tick-borne diseases are normally found in [specific] geographically areas. Mosquito-borne viruses can spread rapidly, like the way we have seen Zika blowing through countries. That’s not the case for tick-borne viruses. Unlike mosquitoes, ticks have a small range and have certain habitat requirements.

But ticks can be transported by birds or other animal hosts. Their distribution can expand with global warming, too; some ticks are now found in regions where they previously were not found. But that expansion is slow.

So there’s no chance Alkhurma can spread to Europe and surrounding regions?

Having said that … two tourists from Italy traveled to Egypt in 2010 and were later diagnosed with the disease back in Italy. It turns out they went to a camel market in a touristic village in southern Egypt near the Sudanese border. They were likely bitten by ticks — which normally feed on camels — carrying the virus. In 2013, two more tourists from Italy who had traveled to Egypt were diagnosed.

This means Alkhurma hemorrhagic fever might be found in other countries, especially those that breed and export camels.

Could Alkhurma spread to the U.S.?

The likelihood of Alkhurma being introduced is very minimal. The two tick species that were shown to transmit the virus are not found in the U.S and even if they were introduced accidentally or intentionally they would have difficulties establishing a permanent presence.

But an exotic tick species was recently introduced in the USA, and there have been new tick-borne viruses found recently. The emergence of this disease might give us clues about other diseases, including the ones [here.]

How can we prevent it?

The easiest thing to do is to try to prevent tick bites. Tourists in areas where the disease is found can do a lot of things to avoid tick bites, like wear long sleeves, pants and closed-toe shoes. They can also wear tick repellent and inspect their skin when getting back to their room. There are also acaricides [a substance poisonous to ticks] that you can put on animals to kill the ticks. Avoid close contact with animals these ticks prefer, such as camels, sheep and goats, in the affected areas.

Yes, some ticks that transmit Alkhurma might feed on goats.

Do the animals experience any of the symptoms?

No. Animals affected by Alkhurma never show any signs of the disease.

There is no specific treatment, no anti-virals. Patients receive only supportive therapy such as fluids. There is a related vaccine that might give some cross-protection, but there is no designated vaccine for this disease. So do what you can to prevent it because once you get bitten, it’s a different story.

Nadia Whitehead is a freelance journalist and science writer. Her work has appeared in Science, The Washington Post and NPR. Find her on Twitter @NadiaMacias.