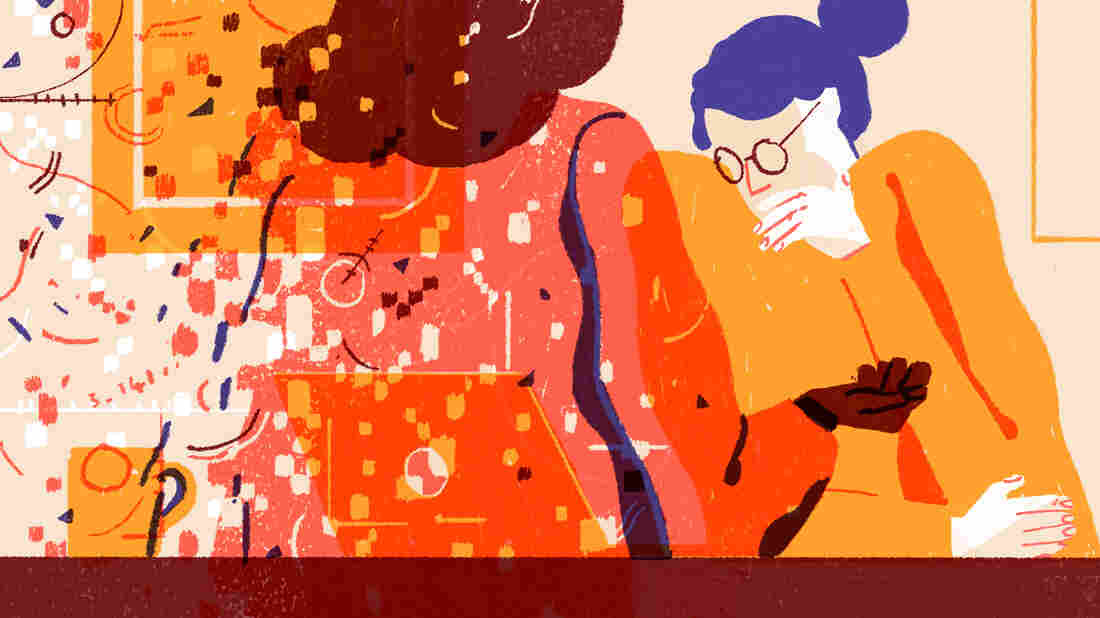 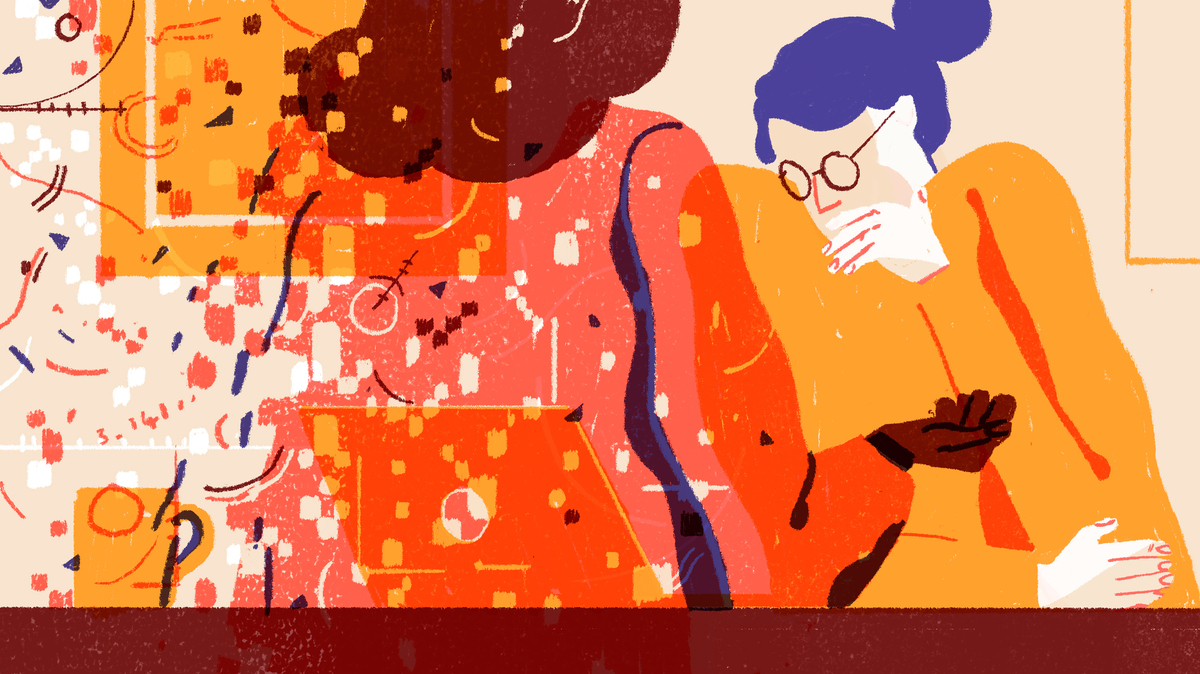 Our Take A Number series is exploring problems around the world through the lens of a single number.

Some high school students think of applying to colleges as a full-time job. There are essays and tests, loads of financial documents to assemble and calculations to make. After all that, of course, comes a big decision — one of the biggest of their young lives.

For top students who come from low-income families, the challenge is particularly difficult.

Research shows that 1 in 4 juggle all of that — the writing, the studying, the researching and applying — completely on their own. One approach to make this whole process easier? Pair students up with someone who can help, a mentor or adviser, virtually.

That’s the idea behind CollegePoint, an initiative funded by Bloomberg Philanthropies. Here’s how it works: When a high school student with a GPA of 3.5 or higher takes a standardized test — the PSAT, SAT or ACT — and they do well (scoring in the 90th percentile), and their families make less than $80,000 a year, they get an e-mail from the program offering them a free virtual adviser.

Each year, about 75,000 students meet the above criteria. Partnering with four non-profits who are doing similar work in the college advising space — Matriculate, College Advising Corps, College Possible, and ScholarMatch — CollegePoint was able to work with 15,000 students planning to attend college this fall. The organization plans to more than double that next year.

It doesn’t matter where you live: High school students have access to an adviser whenever they need — via text, Facebook messenger, email, Skype, Google Docs or the tried-and-true telephone call.

That’s the method Johnny Dang, a high school senior in Austin, Texas, prefers. Last school year, every couple of weeks, he’d spread out his notebooks on his bed, and dial Theresa Heitz, a 24-year-old college adviser based in Minnesota, for a long-distance phone chat.

After a brief hello, “I was thinking maybe we could just, like, dive in,” says Heitz, “and you could kind of walk me through what you’re thinking right now.”

This will turn out to be a big night for Johnny, and we’ll come back to that phone call in a bit. All over the country, advisers like Theresa are doing this — listening, guiding and answering students’ many questions. The goal: help gifted students go to schools that match their intellectual ability.

Applying to the right schools

Connor Rechtzigel, an adviser in Minnesota based in the Twin Cities, sees his most important role in the fall — when students are figuring out what schools to apply to.

“It’s just sort of combating stereotypes or kind of dispelling some myths,” he says.

Things like, yes, you can study science at a liberal arts school or, no, the state school isn’t always the cheapest option. Research shows that low-income students are far more likely to undermatch — to apply and attend schools that aren’t as challenging or competitive. In part because they don’t think they have what it takes to get it and because many don’t even know what schools are out there.

“A lot of students think that there is no middle between your state flagship institution and the Ivy League,” Rechtzigel says.

In East Orange, N.J., where high school senior Justice Benjamin grew up, students really only know the New Jersey and Pennsylvania schools, he says. Justice is the first in his family to apply to college and, before he started working with Rechtzigel, “I was just thinking whatever college accepts me, for the most money I can get — scholarship or whatever it is — I’m going there.”

After he talked with Rechtzigel and his own high school counselor, he started thinking about all of their questions: What’s your ideal learning experience? Do you want a large school? A small school? Do you like a big college town? Do you want to go to school in the city?

He narrowed in on smaller schools where he could study environmental science. His final choice: Skidmore College in upstate New York. He says he felt empowered by the process.

“You don’t have to choose, like, whatever comes to you. You get your own choice.”

Figuring out how to pay for college is a major part of what CollegePoint advisers do.

“For a big chunk of my job, I feel like a financial adviser,” explains Kate Nakhle, an adviser in North Carolina. She is working with McKenna Hensley, a high school senior in Ohio.

“McKenna and I, we spend a lot of time comparing and analyzing her financial-aid award letters,” Nakhle says.

McKenna got into nine schools, so there are a lot of those letters. McKenna’s dad did go to college, but when I ask her if that made it easier, she laughs. “Listen. My dad went to college in the ’80s,” she says. “I could not rely on him for an answer to a question that I had.”

For all those award letters, Kate used a spreadsheet on Google — many advisers use some version of this — where McKenna could enter in all her college costs then compare. And that spreadsheet, she says, it made her decision much more clear.

“It makes a difference when you’re paying yourself,” explains McKenna, who isn’t getting extra financial help from her family. “You have to be extra careful.”

When she did her final calculations, The Ohio State University offered an option where she pays nothing. Staying in-state wasn’t her first choice, but it’s the best option for her.

That wasn’t quite what she’d expected, though. “I just always wanted to have that out-of-state experience … spread my wings!”

But, McKenna adds, she’s the kind of girl that can be amazing anywhere.

Johnny Dang, the senior in Texas on that evening phone call, says he wasn’t totally lost when he started applying to colleges. “I did my research and I knew how to approach college,” he explains. “I wasn’t a student who identified as ‘I don’t know what to do.’ “

He’s the child of two Vietnamese immigrants, and he goes to a public magnet school that does offer good supports for students applying to college. So when he got the notice saying he’d qualified for a CollegePoint adviser, he thought, ‘Nah, I don’t need special help.’

He already knew a few people who went to Rice University, a small private research school in Houston. It’s close to home, has excellent science programs. It was his top choice. But eventually, his adviser, Theresa Heitz, gained his trust.

“Having Theresa there was just really reassuring,” he says. “I think it was good, like, mentally to have a person say, ‘yes, you are doing this correctly.’ “

Theresa helped him craft his college essay about the TV show Golden Girls and its influence on young Johnny. He decided to apply for some Ivy League schools and, in early April, the letters came. He’d made it into an Ivy: the University of Pennsylvania. He also got into Rice. Which is why now, on this Tuesday night chat, they’re talking about one of the biggest decisions in Johnny’s life.

As they chat, both Johnny and Theresa are logged into a shared Google document: A Rice vs. Penn pro-and-con list.

They go down the list. Academics are both strong. Penn has an excellent medical school — Johnny is interested in medicine — but Rice has the Texas Medical Center. Penn is giving Johnny more money. But with Rice, his parents say, they can make the finances work. One minute, Johnny is convinced he’ll go to Rice. It’s smaller, feels more residential and it’s only a few hours away from his parents’ house. But then there’s Penn, a school he didn’t even know he would dream about.

There is one thing he keeps coming back to. A house on Penn’s campus called the Kelly Writers House. A space for writers — poetry, creative writing, etc. Johnny can see himself in this house. Talking classes, writing, critiquing other students’ work. Plus, his classmates are pressuring him to pick the Ivy.

“A lot of my friends are just making it sound like if I [don’t choose] UPenn that’s the equivalent of just going to community college or dropping out,” he tells Theresa on the phone.

She knows the pressure he’s under. “It’s hard to say, ‘don’t listen to them,’ ” Theresa says with a laugh, “But the prestige factor, like all of that stuff, sort of neutralizes once you actually step on campus, and then your real experience begins.”

Theresa pauses, aware, perhaps, of her influence at this moment.

“Just so you know, I hope you don’t feel like I’m trying to sway you one way or another. I do understand that the Ivy pull is really strong, and I just don’t want you to feel like you have an obligation to go to Penn just because you got in. Like, you should feel very proud.”

And then, an hour into the call, it happens. Johnny makes up his mind:

“I think you just convinced me to go to Rice.”

“I think you convinced yourself!”

That was the end of April. Weeks later, I followed up with Johnny. On decision day, did his choice to go to Rice stick?

“My dad went to bed, and then he gave me the credit card and he was like, ‘whenever you’re ready,’ ” recalls Johnny. “I logged into the Rice application portal, said ‘yes’ and paid the deposit.”

I ask him, now that it’s all over, how does it feel?

“It feels amazing,” he says, “it feels wonderful.”

Johnny will start orientation, called O-Week at Rice, in August.