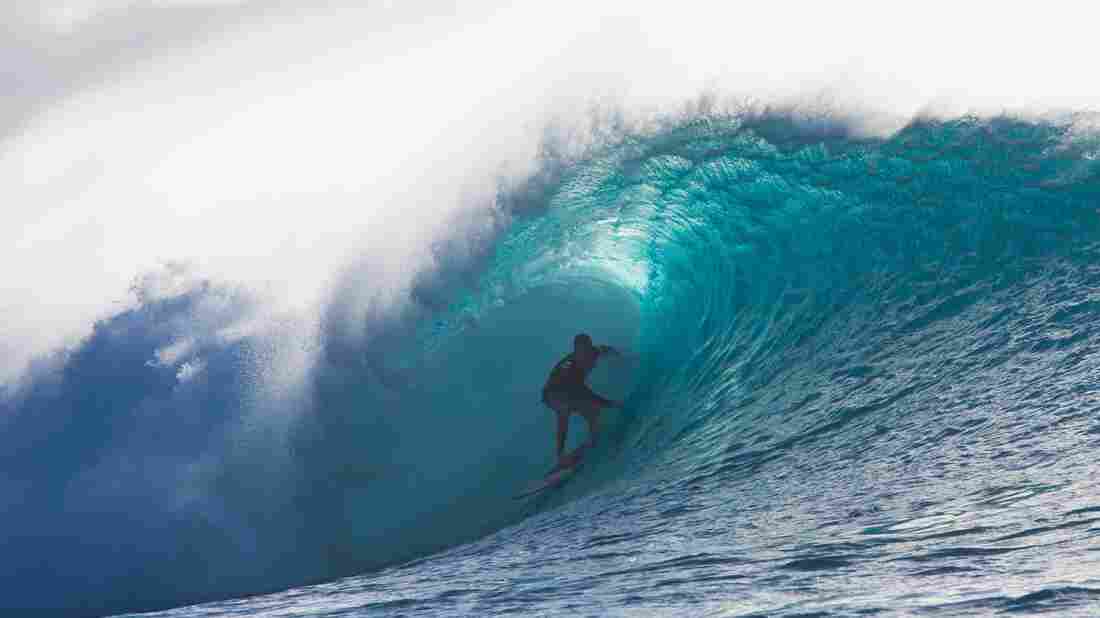 A surfer rides the barrel of a wave during a late afternoon on the North shore of Oahu, Hawaii. Brian Bielmann/AFP/Getty Images hide caption 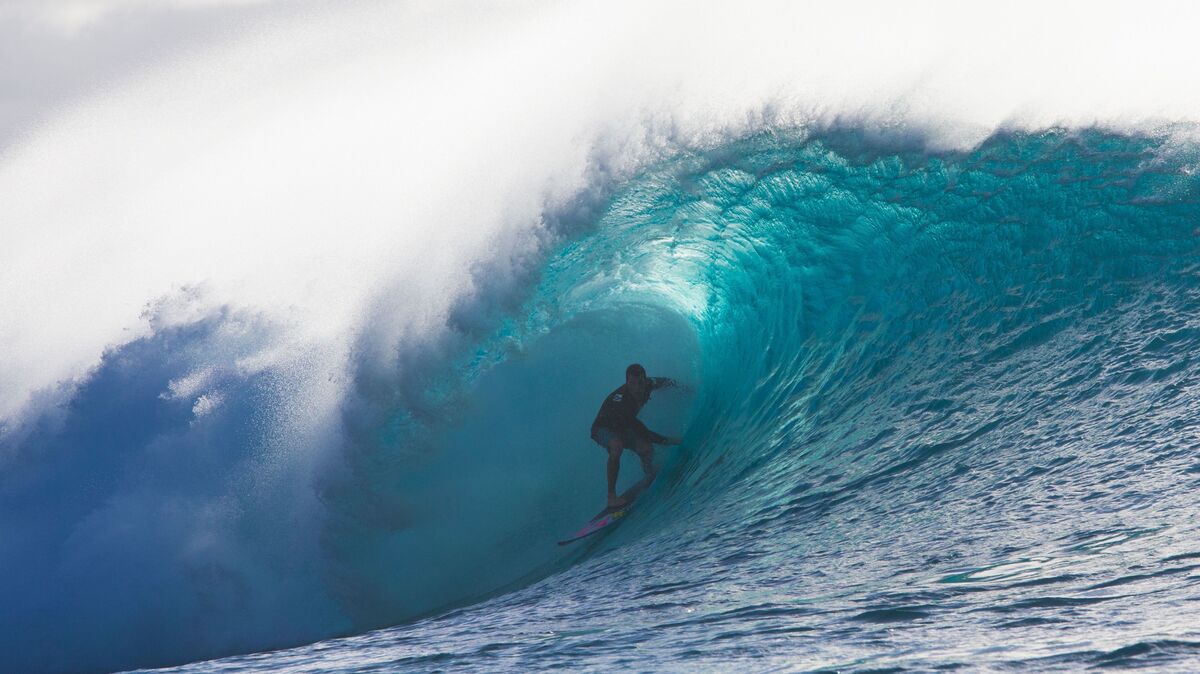 A surfer rides the barrel of a wave during a late afternoon on the North shore of Oahu, Hawaii.

It’s the thick of primary season, and the looming question that hangs over the 2018 midterms is — will Democrats take control of Congress?

NPR has reported on elements of potential answers to that question and shown some reasons for Republicans to find shelter — from the record number of GOP retirements, the record number of women running and special election victories to early strong Democratic turnout and continued division among the Republican base.

All of those things continue to be signs of a potential wave, but with the primaries kicking into high gear — about 130 congressional races will be set in the next month — here are some tips on how to spot a blue wave and how big it could be (or not):

Democrats need to pick up a net of 23 seats in the House and two in the Senate to win back control of both chambers. That looks far more attainable in the House than Senate. But in both, Republicans retain some structural advantages — redistricting after the 2010 Census helped solidify some GOP seats and Democrats’ Senate map might be the toughest ever.

Not only are Democrats defending 26 seats and Republicans just nine, but in the 2016 presidential election, President Trump won 10 of the states Democrats are defending. And he won them by an average of 15 points.

What to watch for a wave: In the House, NBC outlined about half a dozen seats to watch over the next month, with one in Nebraska, one in Texas and three in California, where some Democrats are nervous that because of their top-two primary system, Democrats could get shut out from the general election.

In the Senate, Democrats likely need to run the table in holding all of their seats and likely win two of three of the toss-up seats Republicans are currently in — Arizona, Nevada and Tennessee. If Democrats are polling even or ahead in those places, let’s call them “Majority Makers,” then they have a realistic shot at control of the Senate. 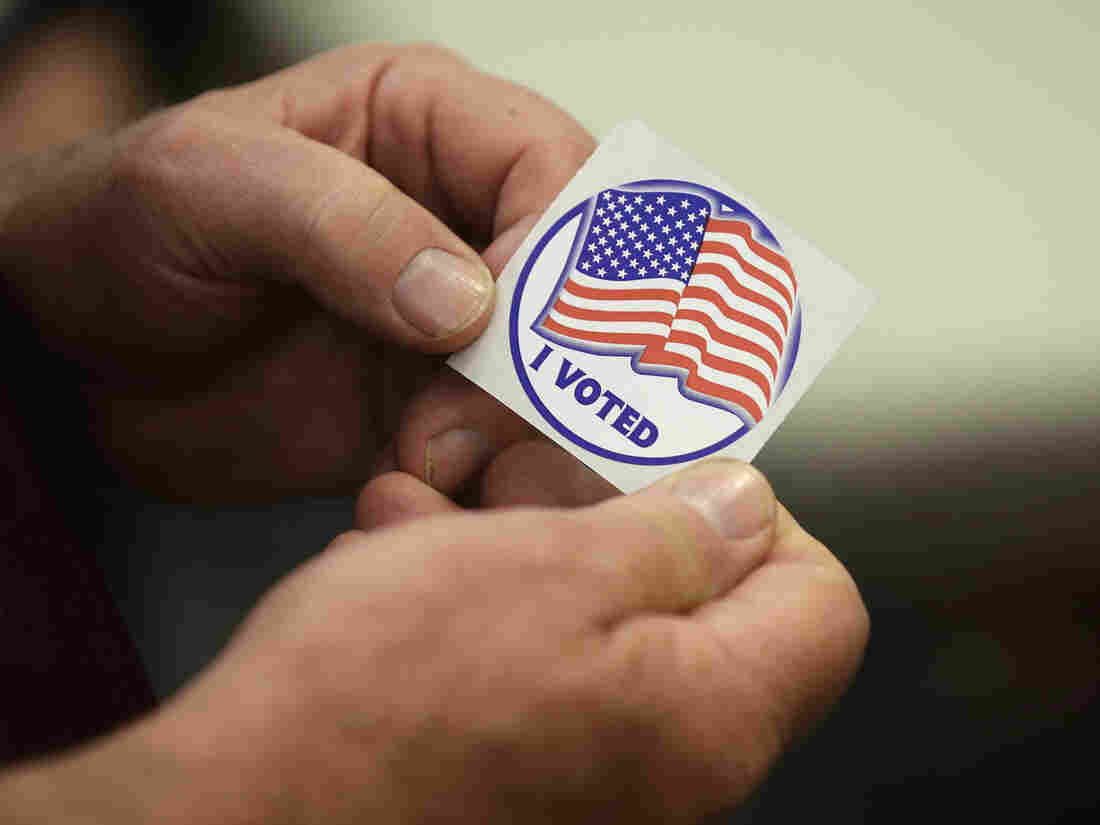 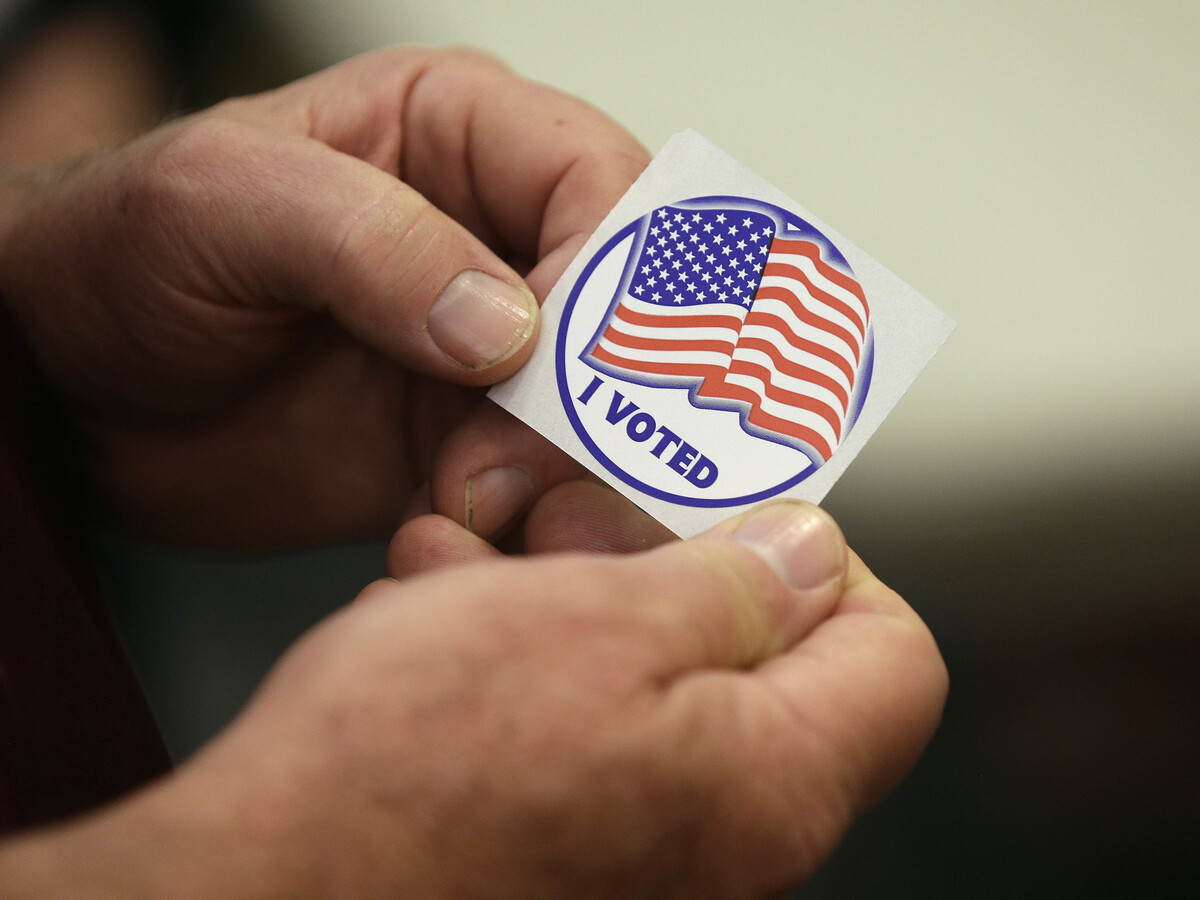 Rick Colyer holds a sticker after placing his vote at the Durham County Library North Regional in Durham, N.C., Tuesday.

This is one of the first places people start when they talk about possible wave elections. So what is the “congressional ballot test”? It refers to a specific question in a public opinion surveys that asks which party you prefer to control Congress.

Here are some examples:

“If November’s election for Congress were held today, which party’s candidate are you more likely to vote for in your district: Democrat, Republican, Neither, Undecided?”

You get the idea.

Democrats have been leading on the congressional ballot test since before the 2016 election. The last time it was really close was on Election Day 2016, when the parties were statistically tied. Currently, Democrats hold about a 6-point advantage, which has tightened since their 10-point lead in February, and a 13-point advantage in December. But it’s nearly exactly the same as a year ago.

So what do all those numbers mean for a wave? When Democrats last took over control of the House, in 2006, they had an 11.5-point advantage on this question. They finished with just a 7.5-point advantage in the actual election, though. And that was before redistricting helped solidify many Republican-leaning districts. (In 2010, when Republicans took back the House, they led by 9 points on the generic ballot.)

This has led many prognosticators to argue that Democrats need far bigger than a 7-point margin to take back the House, let alone the Senate. The evidence for that is unclear, especially in this new political environment and the singularly unifying force that President Trump is for “The Resistance.”

So is the congressional ballot a good measure? Yes, generally (pun intended), but it’s an incomplete one. First, it measures national sentiment, and these elections play out in states and congressional districts across the country.

The Cook Political Report’s Amy Walter summed up this measurement’s efficacy back in November this way:

“While it can’t tell us exactly how many seats one party or the other should expect to gain/lose, it does give us a good idea of the range we can expect.”

But maybe don’t pay too much attention to it too early:

In other words, it’s a good, one-stop shop to quickly tell which party the country wants running things, but it’s not everything.

What to watch for a wave: Do Democrats build more separation between themselves and Republicans. No Republican strategist feels good about where their party is right now, and that might be most telling. But Democrats would be more comfortable with a slightly wider lead on the generic ballot by Labor Day. 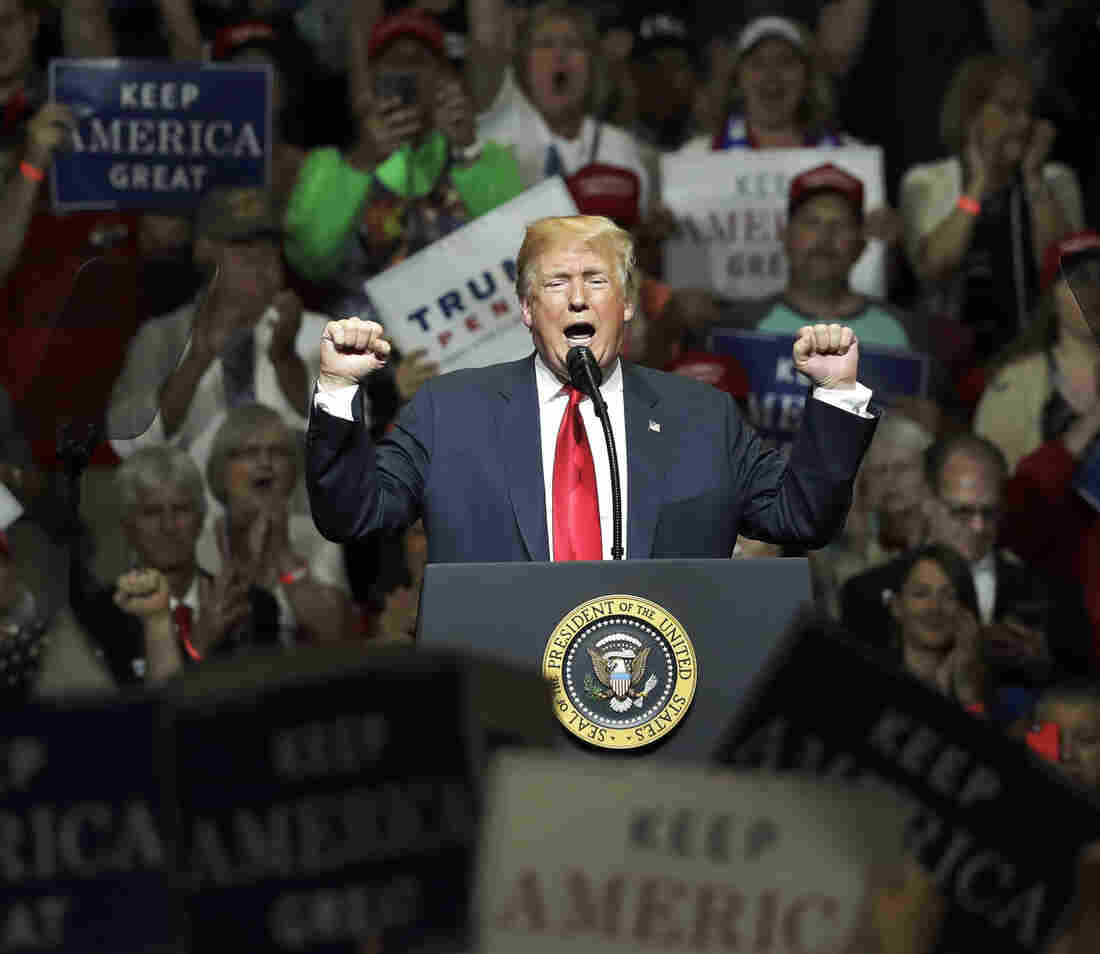 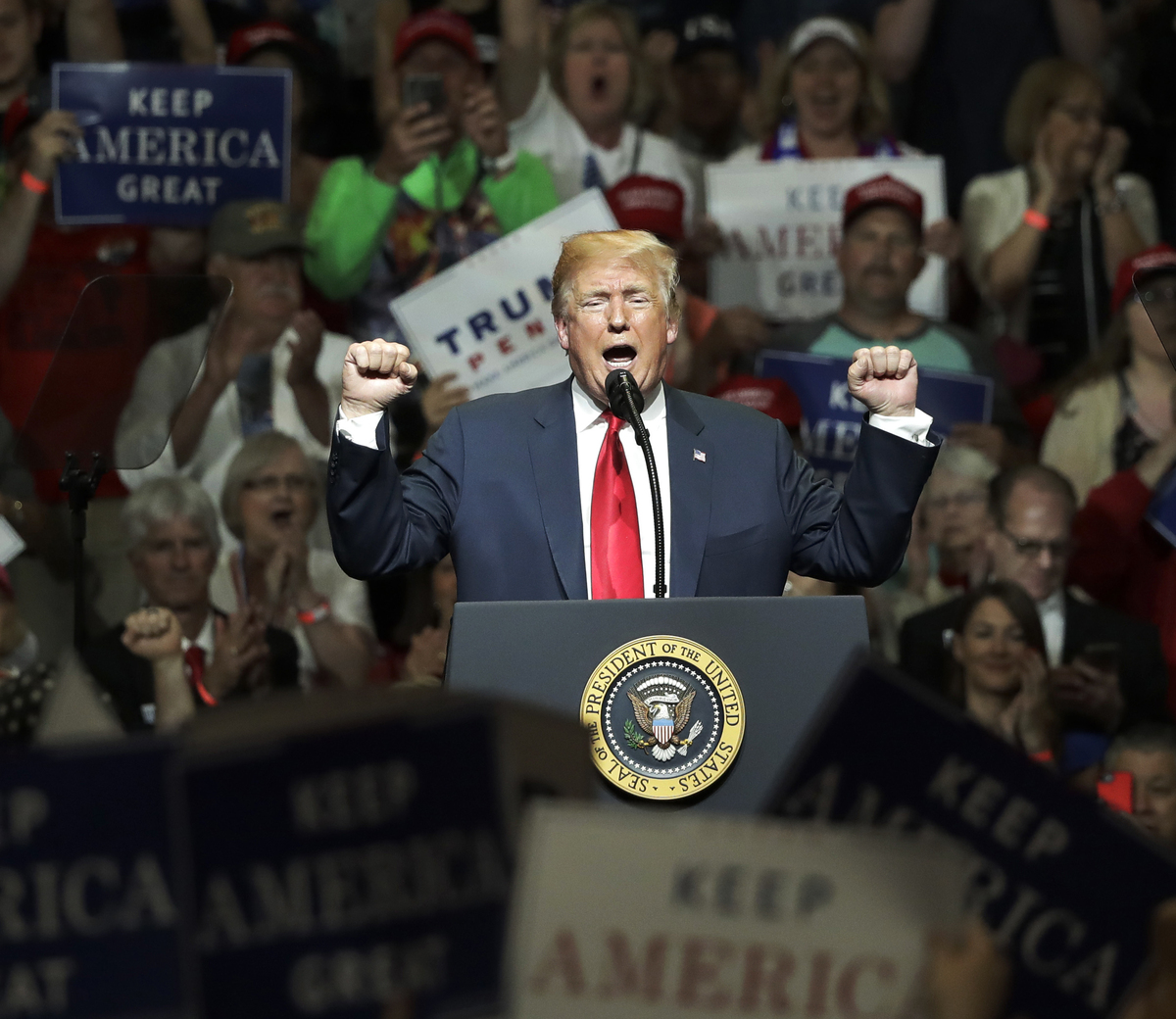 President Trump addresses the crowd during a campaign rally Thursday in Elkhart, Ind.

The president’s average approval rating sits at about 43 percent, according to the RealClearPolitics average. That’s an improvement from the last several months, up from a low of 37 percent last October. That’s good news for a president who didn’t gotten much of it in his first year.

It’s likely not a coincidence that Trump has seen this improvement while unemployment is at its lowest in 18 years (3.9 percent), and the U.S. has moved away from a potential nuclear standoff with North Korea and the South Korean leader is saying Trump deserves the Nobel Peace Prize.

But 43 percent is still historically low – and a warning sign every Republican strategist knows too well. For context, when Democrats got “shellacked” (President Obama’s word) in 2010, Obama’s approval stood at 45 percent. He still got reelected easily two years later, but many other Democratic officeholders never went back to Washington after Obama’s first midterm.

What to watch for a wave: Trump is the ultimate wildcard. His approval and favorability have never risen above the mid-40s. Does it stay on the trajectory it is or does chaos regain the day? Does economy continue to chug along? Does the president make a misstep internationally? Any of those possibilities become more consequential the closer the country gets to Election Day.

That brings us to how historically difficult it is for the party in power to make gains in a midterm. Since the Great Depression, the president’s party has lost an average of 25 seats in the House and two in the Senate in the president’s first midterm.

That doesn’t happen by accident. President Trump seemed to diagnose the problem at this year’s Conservative Political Action Conference, or CPAC, in one word.

“The word really is complacent,” Trump said. “People get complacent. It’s a natural instinct. You get — you just won [the presidency], and now you’re happy, and you’re complacent. Don’t be complacent.”

It’s a plea that often goes unheard in midterms, which are dominated by activists. Obama’s “Don’t boo, vote!” only seemed to work for him in presidential election years.

This year, the script is flipped, and that enthusiasm gap appears to be benefitting Democrats. What’s the evidence for that? Here’s one data point: when Pew asked earlier this year whether you were looking forward to the midterm congressional elections, liberals were really fired up – 83 percent of liberals said they were looking forward to the election (up from 59 percent in 2014 and 48 percent in 2010).

What to watch for a wave: There are lots of elections in the next two months. Start charting primary turnout percent change from 2014 (the last midterm) to 2016 to 2018. If Democrats are consistently showing elevated turnout, that could be the surest real-time sign of high water coming in.