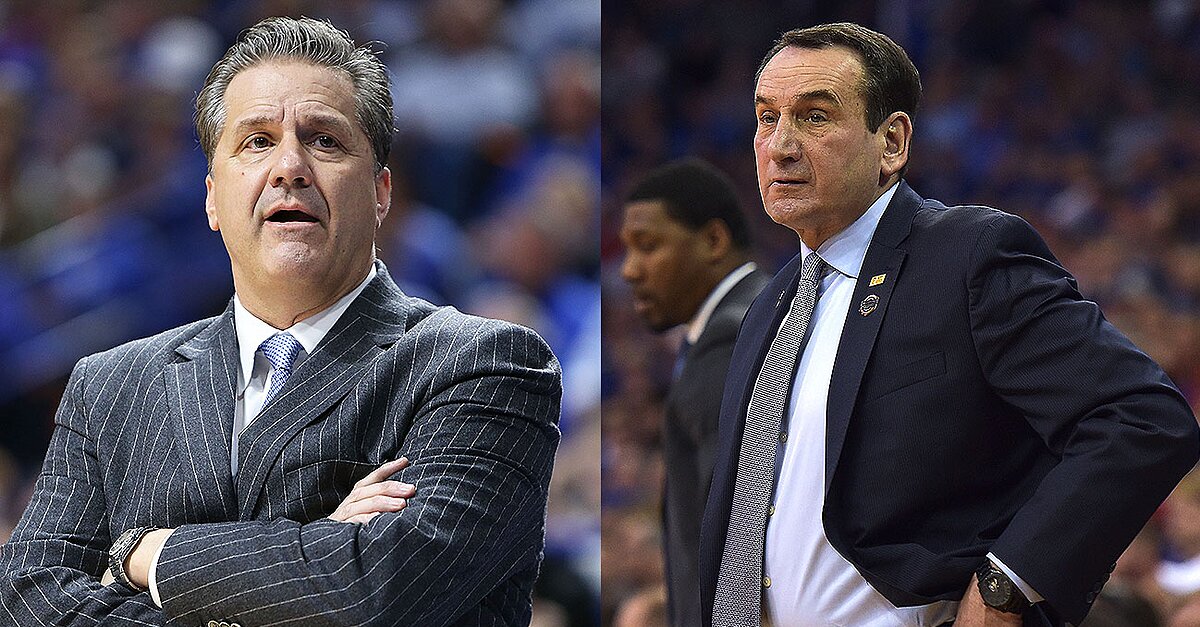 Another NBA draft has come and gone, and it probably surprised no one that Duke and Kentucky, along with national champion Villanova, led the way in terms of number of players selected, with four apiece. But while ’Nova having four players drafted was a program record, both the Blue Devils and (Lexington-based) Wildcats have been here before. Who could forget the whopping six players Kentucky had drafted back in 2015?

The NBA draft success of Duke and Kentucky makes sense; after all, John Calipari and Mike Krzyzewski have absolutely dominated the college basketball recruiting landscape in recent years. Per the 247Sports Composite, the two schools have had the top two incoming recruiting classes for four straight years (with Duke being No. 1 for three of them), and are once again set to bring in the top two 2018 classes.

The annual Coach K vs. Calipari recruiting battles are always fun to follow, but what about the battle over developing their NBA talent? It may not be the direct competition that recruiting the same high school player is, but both schools certainly take advantage of touting their draft history when playing on prestige in an attempt to land the next group of college stars.

Here are the combined numbers for the last five NBA drafts (2014–2018) and how Duke and Kentucky have fared:

*Does not include Semi Ojeleye and Michael Gbinije, who started their careers at Duke, transferred out and were later second-round picks

As you can see from the chart, Duke has excelled at the top of recent drafts. In fact, Krzyzewski has had one of his players drafted in the top three for a whopping five years in a row now, the most recent being big man Marvin Bagley III, who went No. 2 to the Sacramento Kings on Thursday. Kentucky, meanwhile, has the only No. 1 pick from either school in the last five years, that being Karl-Anthony Towns in 2015 (Duke’s most recent No. 1 pick was Kyrie Irving in 2011).

Despite the top-five disparity, the Wildcats have the edge in the total number of lottery picks—including that memorable 2015 draft where three other UK players joined Towns within the top 14—and also narrowly win the first-round battle and win the total number of players drafted by four. The last time Kentucky didn’t produce a lottery pick was back in 2009, not coincidentally the last draft before Calipari’s arrival.

In addition to the total number of NBA draft picks, both schools have had a number of players go undrafted and later appear in at least one NBA game. That list includes Quinn Cook (who averaged 10.3 minutes across 17 playoff games this year for the Golden State Warriors), Marshall Plumlee and Andre Dawkins for the Blue Devils, and Alex Poythress and Aaron Harrison for the Wildcats.

On Thursday night, both schools had an underclassman go undrafted: Duke’s Trevon Duval, a former top-10 recruit who struggled at times and shot just 29.0% from three and 42.8% from the field during his freshman season, became the first ever “one-and-done” Blue Devils player to not be drafted. For Kentucky, Wenyen Gabriel was not selected after averaging 6.8 points and 5.4 rebounds in his sophomore year. For both Duval and Gabriel, the decision to choose the draft instead of another year in college was likely impacted by the next wave of elite recruits their respective schools were bringing in.

So what does it all mean? Is it better to be able to point to your success at the very top of the draft, or your overall lottery success? There’s not necessarily one right answer. When it comes to individual recruits, each player is different and so many factors go into the final decision. Additionally, the decisions made by NBA teams on when or whether to draft a player come down to far more than just college production. Just look at 2018 National Player of the Year Jalen Brunson, who was the only one of Villanova’s four players drafted to not be taken in the first round (he went 33rd).

Both Krzyzewski and Calipari have plenty of proven success in getting players drafted high and have earned their reputations as elite recruiters. While instances like that of Duval or of former Kentucky guard Aaron Harrison, who was a top-10 recruit and went undrafted after two years in Lexington (his twin brother, Andrew, was also a top-10 recruit and went in the second round) are a reminder that neither high school rankings nor attending Duke or Kentucky are a guarantee of anything, not getting drafted isn’t the end of a chance at an NBA career, either (the odds, however, are obviously slim).

As long as Coach K and Coach Cal are still in Durham and Lexington (and as long as the “one-and-done” rule is in effect), expect the cycle to continue for both schools. Having a stockpile of top young talent hasn’t always equaled a Final Four trip—in fact, neither program has reached college hoops’s final weekend since both earned a trip in 2015—but when it comes to the draft the numbers speak for themselves.