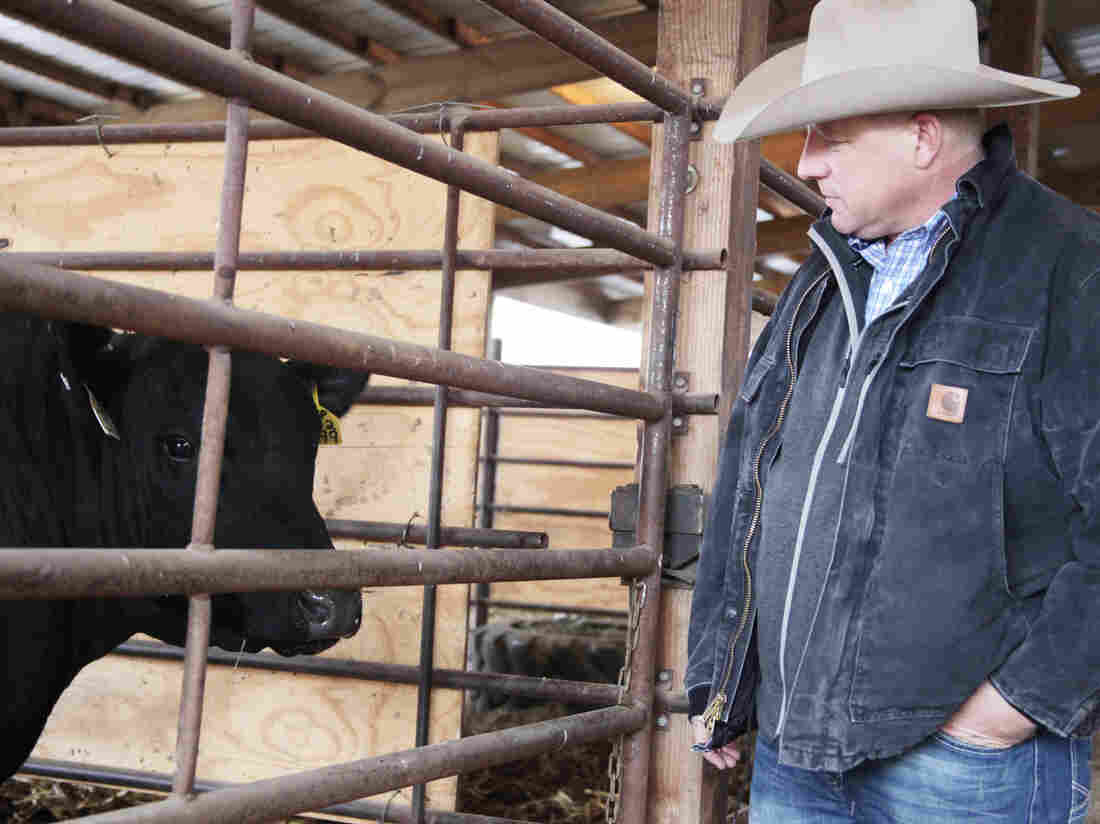 Elation is an Angus bull that recently sold for $800,000. His co-owner, Brian Bell, sells Elation’s semen for $50 a sample, about double the going rate. Kristofor Husted/Harvest Public Media hide caption 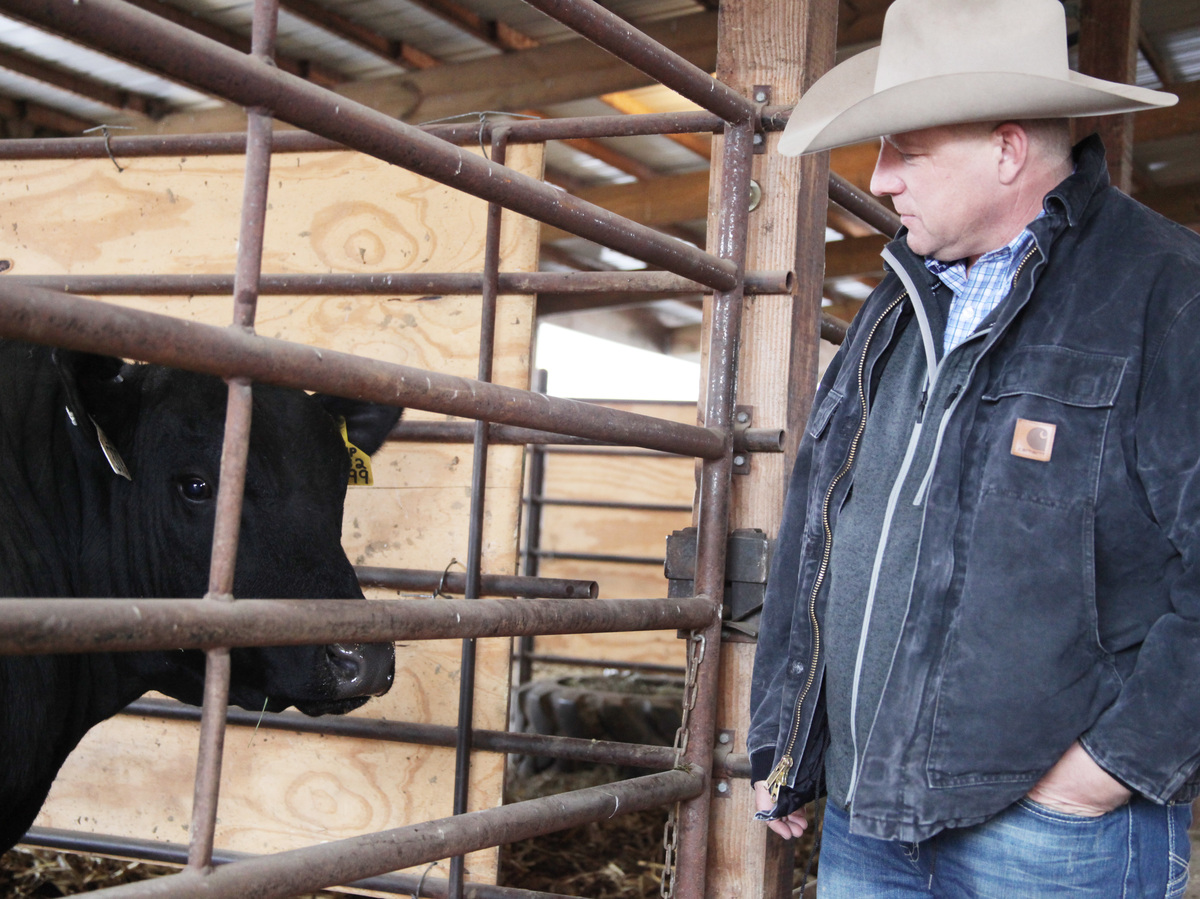 Elation is an Angus bull that recently sold for $800,000. His co-owner, Brian Bell, sells Elation’s semen for $50 a sample, about double the going rate.

Beef cattle ranchers are getting wise to the science of genetics.

They have always known that making the best steak starts long before consumers pick out the right cut, such as where an animal grazes or what it eats. The key is in the genetic makeup — or DNA — of the herd. And over the past year, those genetics have taken a historic leap thanks to new, predictive DNA technology.

This is playing out in rising auction prices for the best bulls as identified by genetic profiles or simply for their elite pedigree.

“The demand there is primarily because we have the best genetics in the world,” said Gordon Doak, president emeritus of the National Association of Animal Breeders.

“The bull [ranchers] used two years ago — they’re not going to use him again,” Doak said. “There’s new ones coming online all the time that have better genetics. That’s why [demand] has increased.”

Today, ranchers can shop for bulls or bull semen touting a very specific genetic concoction that’s prime for improving their herd. And those concoctions are becoming more valuable every day.

Missouri rancher Brian Bell traveled to North Dakota for a cattle auction in February. Like many of the hundreds of attendees, he had his eye on a specific Angus bull named Elation.

Elation, raised at Schaff Angus Valley in North Dakota, is descended from a famous family of beef cattle, and has the genetic recipe for efficient, meat-producing cattle.

“Perfect footed. Perfect uddered. Fertile,” Bell said. “You know these cattle have some longevity and will stay in people’s herds and allow them to be profitable.”

Elation’s caretaker, Isaiah Shnurman, said the bull is treated like a star athlete. Elation spends most of his time in a large pen that has indoor-outdoor access. He exercises and has a mineral tub to lick and a large tire full of hay to snack on. A chiropractor visits once a month. And on Mondays and Thursdays, his semen is collected.

Bell and Oklahoma rancher David Bogle teamed up so they could afford to bid on Elation.

“At the end there were three people bidding on the bull — one was from overseas and then two in the states,” Bell said. “And David jumped the last bid I think by $50,000. That was the deal sealer there.”

While some dairy cows have been auctioned for more than a million dollars, the final price for Elation — $800,000 — set a world record for a bull.

“It’s an investment in our herds,” Bell said, adding: “And then also we’ll sell semen throughout the world and hopefully help pay for the bull.”

More than 2.5 million samples of beef semen were sold in the United States last year. That’s double from 2010, according to the National Association of Animal Breeders. Altogether, exports for dairy and beef cattle semen hit a record $170 million in 2017, according to the U.S. Department of Agriculture and U.S. Census Bureau Foreign Trade data.

Bull semen is even sold on Amazon.

Bell and Bogle each hold 40 percent ownership of Elation, with 20 percent staying with Schaff Angus Valley.

And so far the investment is working out. While most Angus semen fetches $20 to $25 per sample (also called a straw), Elation’s semen is selling for $50.

Bell said they already have a waiting list from cattle ranchers across the world. As of April, Bell said he had already sold 4,500 straws and his investment in Elation could be paid off in one to three years, depending on how tasty Elation’s hundreds or even thousands of progeny turn out to be for beef customers.

That’s because he also plans to use Elation’s semen in about 450 of his own cows at Square B Ranch in Missouri.

“That’s the most important part, because ultimately that’s our customer,” Bell said. “In the beef world, we’re trying to grow beef whether it’s at a high-end restaurant or they’re picking it out of the meat department at a grocery store.”

About 85 percent of U.S. beef ranchers, though, still develop herd genetics the old-fashioned way — by setting a bull loose with cows in a pasture, according to estimates by the National Association of Animal Breeders.

In buying those bulls, ranchers traditionally have analyzed how a prospective bull’s progeny has developed over generations, using genetic predictions called Expected Progeny Differences or EPDs. That shifted in November, when the American Angus Association introduced a genomic testing kit that drills down into even more specific traits.

For $37 a pop, ranchers can send in a tissue or blood sample and receive a readout on how that bull’s genetic makeup compares to others in the breed. 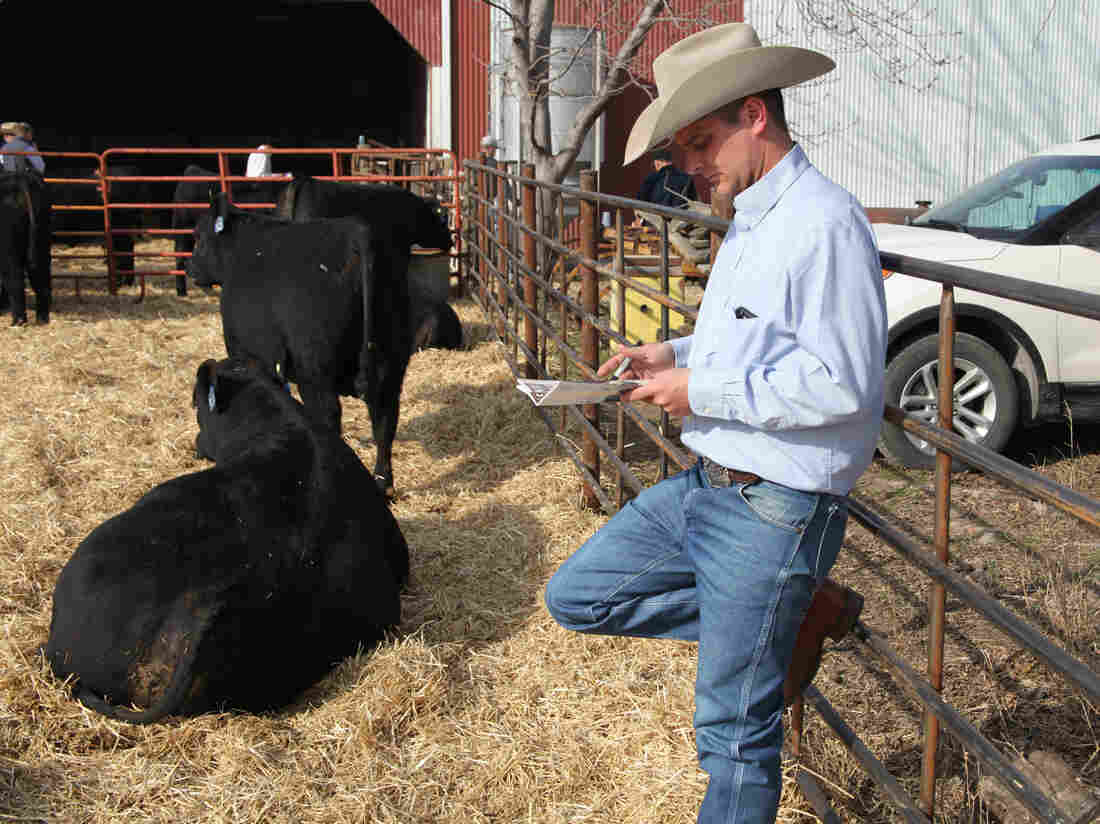 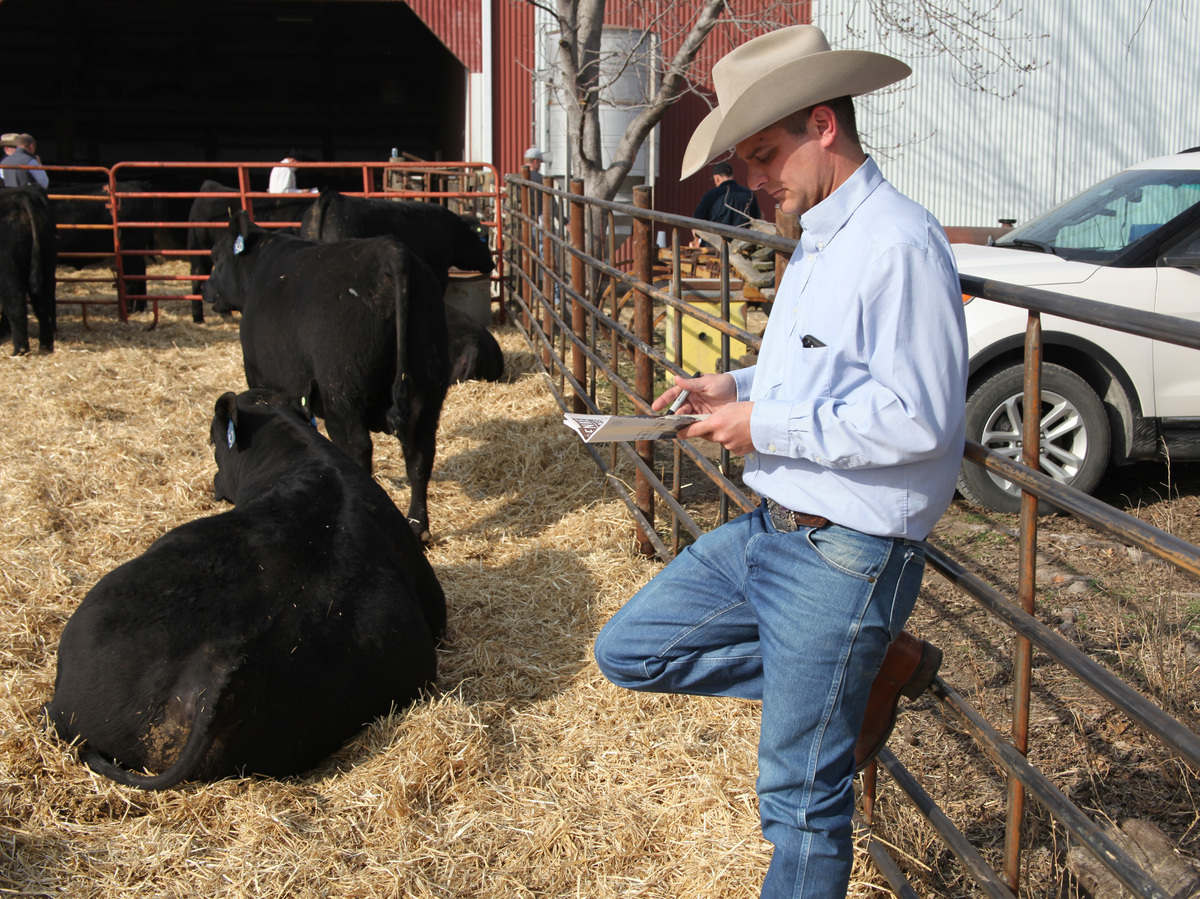 Cattle sales consultant Wes Tiemann reviews the catalog for an Angus auction at Henke Farms in Salisbury, Mo. Each animal in the auction is DNA tested.

“Genomic testing allows us to basically find animals that are better for traits like marbling earlier that have a bigger tendency to pass down those traits later on in life, so that we can create a better product for the consumer,” said Kelli Retallick, genetic services director for Angus Genetic Incorporated, the breeding arm of the American Angus Association.

This new tool was in evidence at a recent auction in Salisbury, Mo., where about 100 people gathered to pore through the genetics of the 88 cattle for sale. Each bull was DNA tested to see how it compared to others in the Angus breed. Next to each photo in the sales catalog is what looks like a baseball card that includes a bull’s birth date, weight and a chart of statistics from his DNA test.

When bulls were brought into the sales ring, the auctioneer yodeled out the results of his DNA test.

This new genetic information takes some of the risk out of the equation, said Jared Decker, a cattle geneticist and assistant professor at the University of Missouri.

“If we have a genomic-based, DNA-based genetic prediction, there’s less possibility for that genetic prediction to change as we get more data back on that animal,” he said. And that predictability cuts costs for ranchers.

But for the DNA tests to be useful, ranchers have to benchmark their livestock with measurements and ultrasound scans that correspond to the DNA.

“If we’re not turning in those weights and if we don’t get that hard information or those scans, five years down the road, our DNA doesn’t mean anything to us because the DNA is changed. These animals have changed and evolve through selection pressure,” said Wes Tiemann, a cattle sales coordinator and producer from central Missouri.

Tiemann said he has more customers asking about the genomics of cattle for sale every week and expects that to continue with increased consumer demand for beef.

And that’s the final piece of the picture: Across the globe, people are hungry for quality beef.

“Consumer demand for all meats has been stronger both in the U.S. as well as the rest of the world,” University of Missouri agricultural economist Scott Brown said.

“I think consumers today are talking a lot more about the taste of meat products and have been willing to potentially add more meat to the diet than we’ve seen in the past,” he said. “And if that trend continues I think it bodes well for the livestock industry.”

The DNA tests are helping producers improve the U.S. beef herd strengths and fix its weaknesses, in the end creating a diner’s dream steak, Decker said. His research group is even working on tailored DNA tests that can better predict how productive cattle will be in specific environments with humidity, elevation or toxic vegetation.

And at future cattle auctions, ranchers likely will have more traits available in each bull’s genomic profile for decision-making.

Ultimately, whether a rancher is bidding for the first million dollar beef bull or examining a bull’s genomic readout, the U.S. beef herd’s genetic makeup is evolving.

And while these prized bulls will likely never meet many of their offspring, many shoppers will come across them in grocery stores as this pool of genetics shapes beef herds in the U.S. and international markets.

This story comes to us from Harvest Public Media, a reporting collaboration focused on food and agriculture. Follow Kris on Twitter: @krishusted