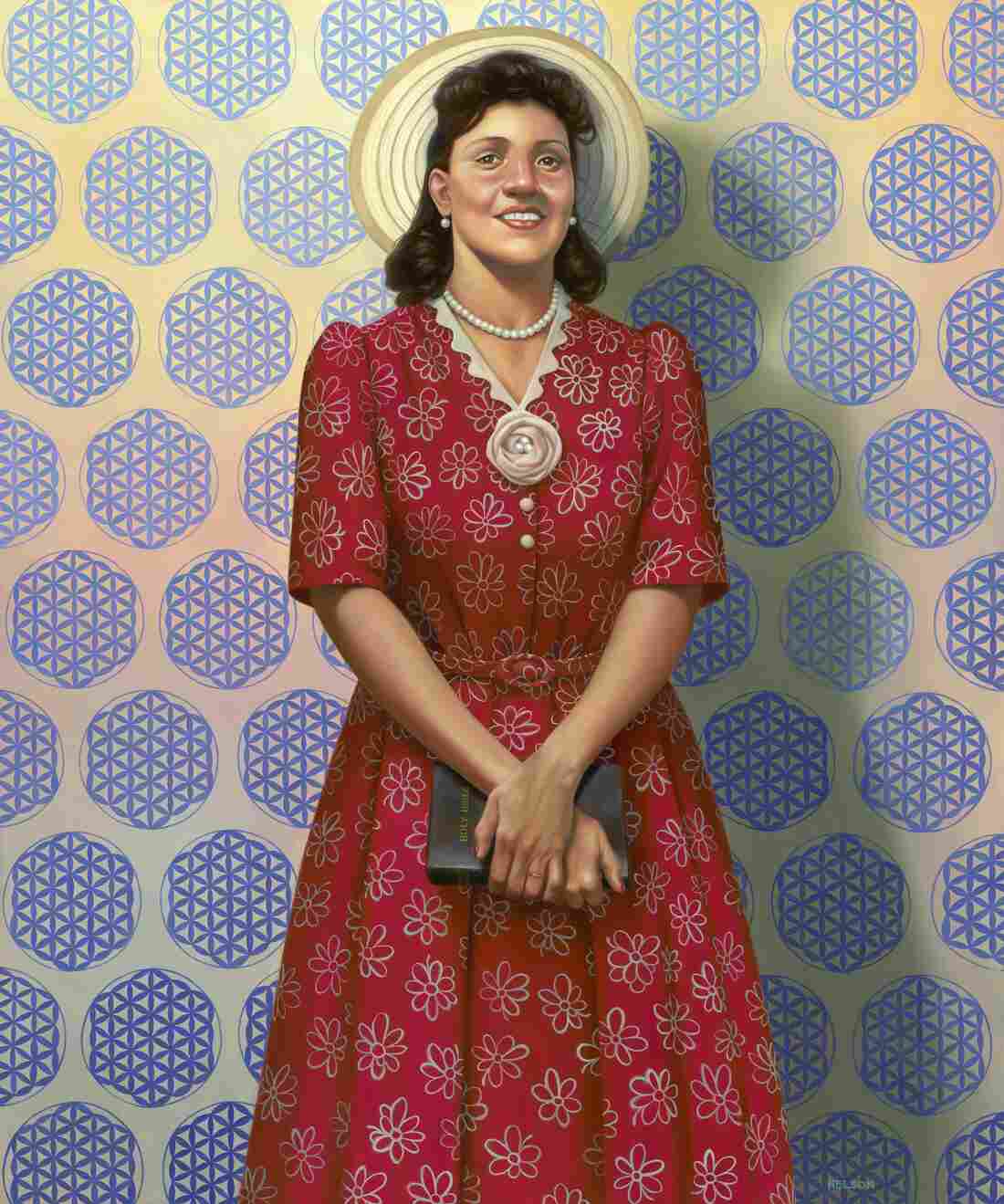 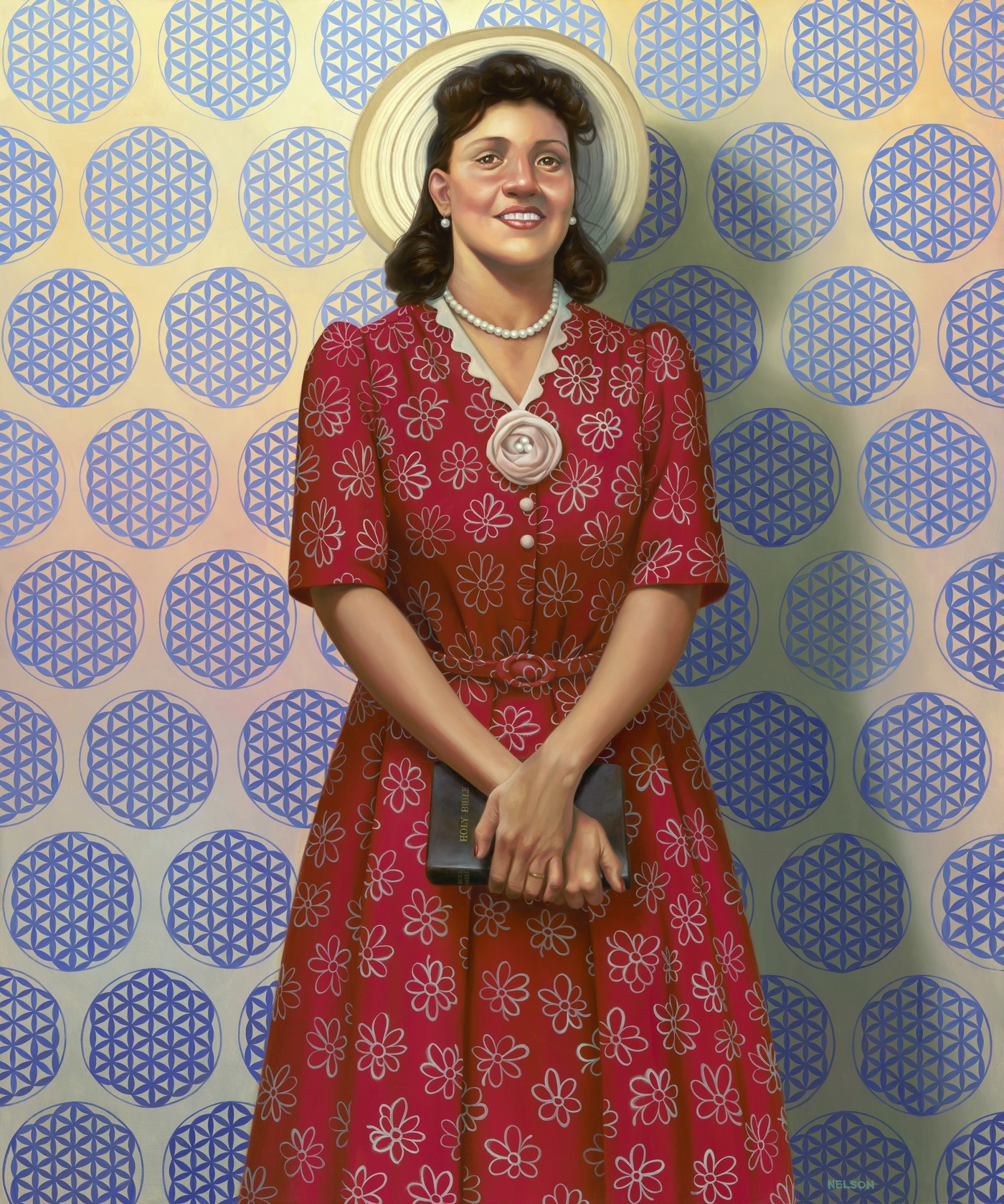 The Mother of Modern Medicine” by Kadir Nelson, oil on linen, 2017.

When Henrietta Lacks was dying of cancer in 1951, her cells were harvested without her knowledge. They became crucial to scientific research and her story became a bestseller. Since then, Lacks has become one of the most powerful symbols for informed consent in the history of science.

On Monday, when the National Portrait Gallery in Washington, D.C., honored Henrietta Lacks by installing a painting of her just inside one of its main entrances, three of Lacks’ grandchildren were there.

“This is amazing!” marveled Kimberly Lacks. “Soon as you walk through the doors, there she is!

Kimberly Lacks, Jeri Lacks Whyte and Alfred Carter Lacks saw this portrait for the first time at its unveiling. They never knew their grandmother, as she died before they were born.

“Just like they said she was in life,” Jeri adds. “Happy, outgoing, giving — and she’s still giving.”

Literally tons of Lacks’ cells have been grown in labs over the past 67 years. They helped develop the AIDS cocktail, the polio vaccine, and treatments for hemophilia, herpes, influenza and leukemia.

Henrietta Lacks and her family never benefited from the thousands of patents and billions of dollars her cells helped generate.

HBO commissioned this painting after the company made a movie based on the award-winning nonfiction book The Immortal Life of Henrietta Lacks, by Rebecca Skloot. The canvas is co-owned by the National Portrait Gallery and the National Museum of African American History and Culture.

Bill Pretzer is a senior curator at the African-American museum, and he says the story of Lacks is also one of racial history, bioethics and medical history.

“Doctors had been trying for half a century to grow cells in laboratory circumstances that would reproduce,” Pretzer says.

Lacks’ cells did. What’s become known as her “immortal line” is represented in the painting, says Pretzer, by a pattern in her cheerful red dress that resembles cell structures when you look at it closely.

Family members do a selfie in front of the portrait of Henrietta Lacks, whose cancer cells were used in pioneering research without her knowledge. This was the first day that the portrait was being displayed at the National Portrait Gallery @wamu885 @smithsonian pic.twitter.com/q9vSGv2nxF

“There are a couple of buttons that are missing on Henrietta Lacks’ dress, and those were explicitly left off by the artist as a symbol of the cells that had been removed from her body,” he says.

The artist, Kadir Nelson, painted Lacks standing in front of a wall covered with blue and purple hexagons.

“A pattern that almost looks like wallpaper, but it’s actually representative of her cells,” says Dorothy Moss, a National Portrait Gallery curator.

In the painting, Henrietta clasps a bible in front of the part of her body from which her cells were taken. Her face is haloed like a saint’s by the brim of a light sun hat.

The doctor who cut her open wrote later that the tumors looked like pearls studding the inside of her body; she wears pearls in the portrait.

Her granddaughter Kimberly has her own interpretation.

“Pearls seem like its classy, just a test of time — and that’s what she was, she was classy,” Kimberly says. “I just think its amazing. A great representation of our grandmother — our ‘she-ro.’ “

Pretzer says this portrait should be a reminder “that history can be remade, re-remembered.”

Along with the painting, Lacks has been re-remembered in all kinds of ways in recent years: She received as posthumous doctorate in public service from a college in Maryland. A high school for students interested in medicine now bears her name. So does a minor planet whirling in the asteroid belt between Mars and Jupiter.