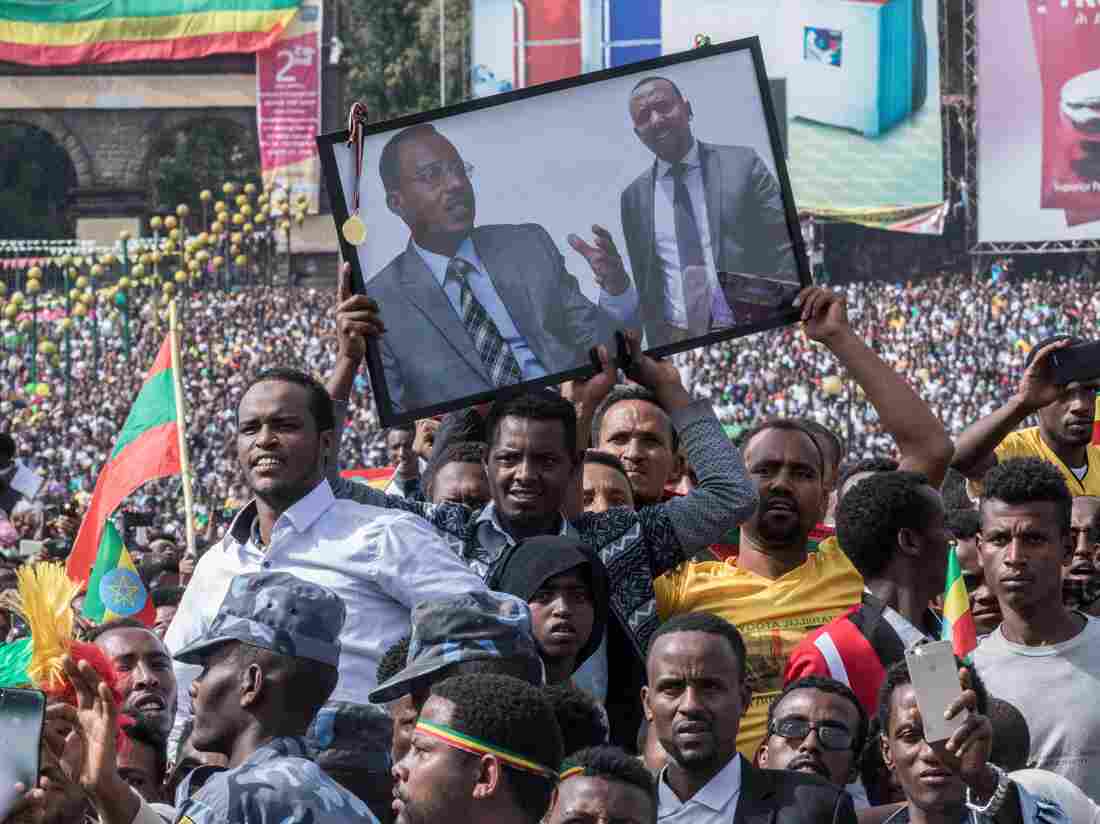 Thousands of Ethiopian Prime Minister Abiy Ahmed’s supporters gathered to watch him speak at a rally Saturday in Addis Ababa. But a blast interrupted the event, leaving at least one person dead and dozens more with injuries. Yonas Tadesse/AFP/Getty Images hide caption 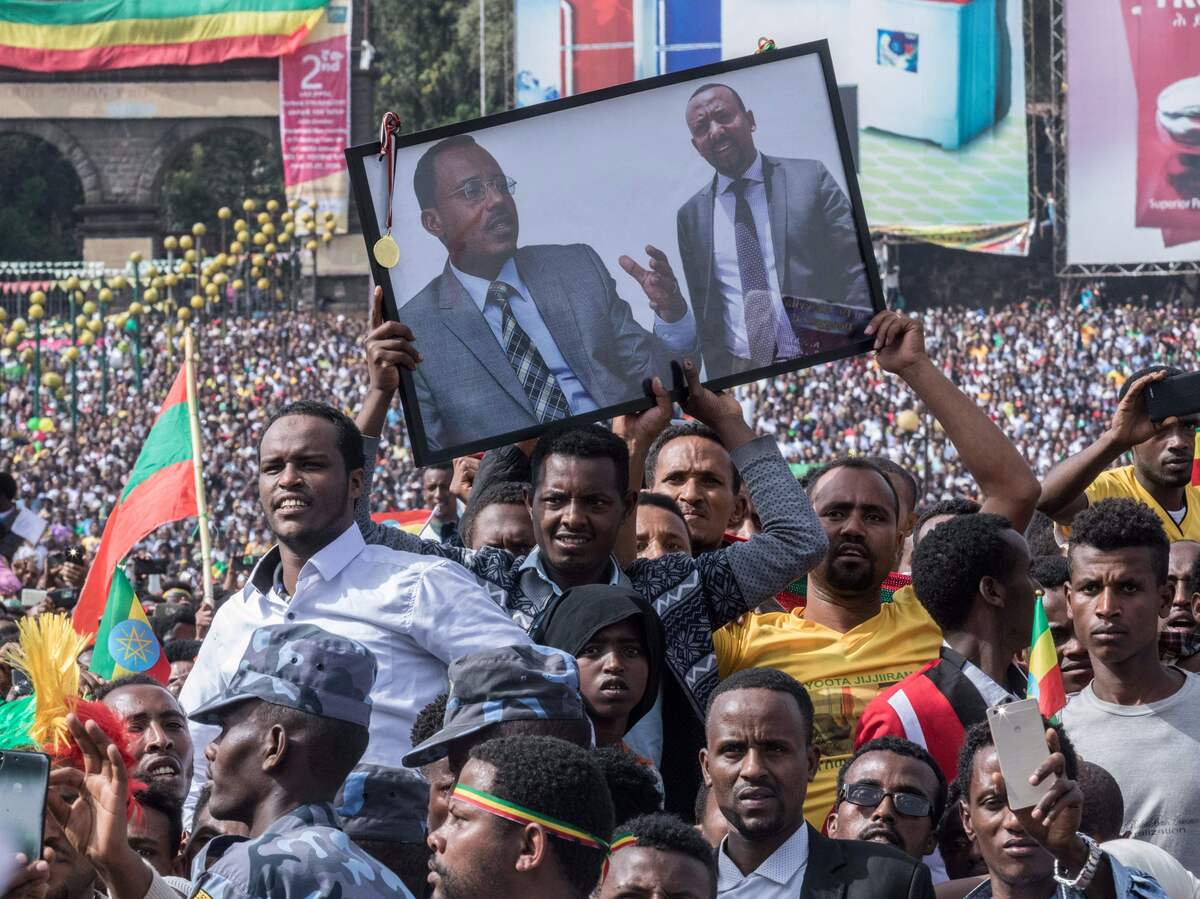 Thousands of Ethiopian Prime Minister Abiy Ahmed’s supporters gathered to watch him speak at a rally Saturday in Addis Ababa. But a blast interrupted the event, leaving at least one person dead and dozens more with injuries.

Tens of thousands of people gathered Saturday in Ethiopia’s capital, Addis Ababa, bearing flags and seeking a glimpse of a reformist leader whose tenure is just months old. Prime Minister Abiy Ahmed was in the central Meskel Square to deliver a speech — but not long after he finished, a deadly blast unraveled the crowd.

At least one person died and scores more were wounded in the explosion and its aftermath. Of the more than 150 people who sustained injuries, eight remain in critical condition as of Saturday night local time, according to the country’s minister of health.

The prime minister, for his part, emerged from the attack unharmed.

“We will overcome hate with love. Some whose heart is filled with hate attempted a grenade attack,” Abiy’s chief of staff, Fitsum Arega, said on Twitter, adding: “The perpetrators will be brought to justice.”

We will overcome hate with love. Some whose heart is filled with hate attempted a grenade attack. HE PM Abiy is safe. All the casualties are martyrs of love & peace. HE PM sends his condolences to the victims.The perpetrators will be brought to justice. #Ethiopia ፍቅርያሸንፋል

Authorities have not clarified who, exactly, they believe those perpetrators to be. Speaking to the country not long after the rally, Abiy referred to the attackers as “anti-peace forces.”

Footage of the explosion and its aftermath surfaced soon afterward, depicting scenes of panic rippling the crowd immediately after a loud pop sounds in their midst.

VIDEO: One person died and scores of others were hurt after a grenade went off in a crowd of tens of thousands of people during a mass rally by Ethiopian Prime Minister Abiy Ahmed in the heart of Addis Ababa pic.twitter.com/FYjAzl553d

A camera had been trained on Abiy, too.

In the video, the premier is seated on stage after his speech listening to the next speaker, when the blast sounds and stirs confusion among Abiy and the people surrounding him. Soon, members of Abiy’s security detail appear to realize the situation and hastily usher him to safety.

Update: A footage from Ethiopian News agency shows PM #AbiyAhmed whisked away by his security detail. A faint sound of explosion can be heard over the MC who was thanking those Ethiopians watching the program from abroad. The crowd is dispersing and no further alert as of now. pic.twitter.com/Ls0n6oPWIs

The rally’s organizer, Seyoum Teshome, told The New York Times he believes the prime minister was the attack’s target, “because the suspect was aiming to throw the grenade by the right side of the stage, where he was sitting.”

He said it was the intervention of people around the attacker that disrupted the assassination attempt. Most of the victims sustained their wounds “not due to the grenade, but rather it was the stampede, it was just running away from that spot,” Seyoum told Agence France-Presse.

Though Abiy has not been in power long, having only ascended to the premiership in April, he has wasted little time implementing an agenda of rapid change in a country that for years had stifled dissent. He released political prisoners, lifted a state of emergency and said earlier this month that his government would fully accept a peace agreement with neighboring Eritrea that had languished for years.

He has also sought to facilitate peace talks between warring factions in South Sudan.

Eritrea’s ambassador to Japan, Estifanos Afeworki, said Saturday that his country “strongly condemns the attempt to incite violence” at the Addis Ababa demonstration.

The U.S. Embassy in the Ethiopian capital spoke up with a condemnation of its own, asserting that “violence has no place as Ethiopia pursues meaningful political and economic reforms.”

Meanwhile, Abiy spent his evening visiting victims in the hospital.

“He told them they represent the true spirit of love, forgiveness & togetherness,” Fitsum, Abiy’s chief of staff, said Saturday. “They all are our inspiration, our courage & a true reminder of what is good in us.”