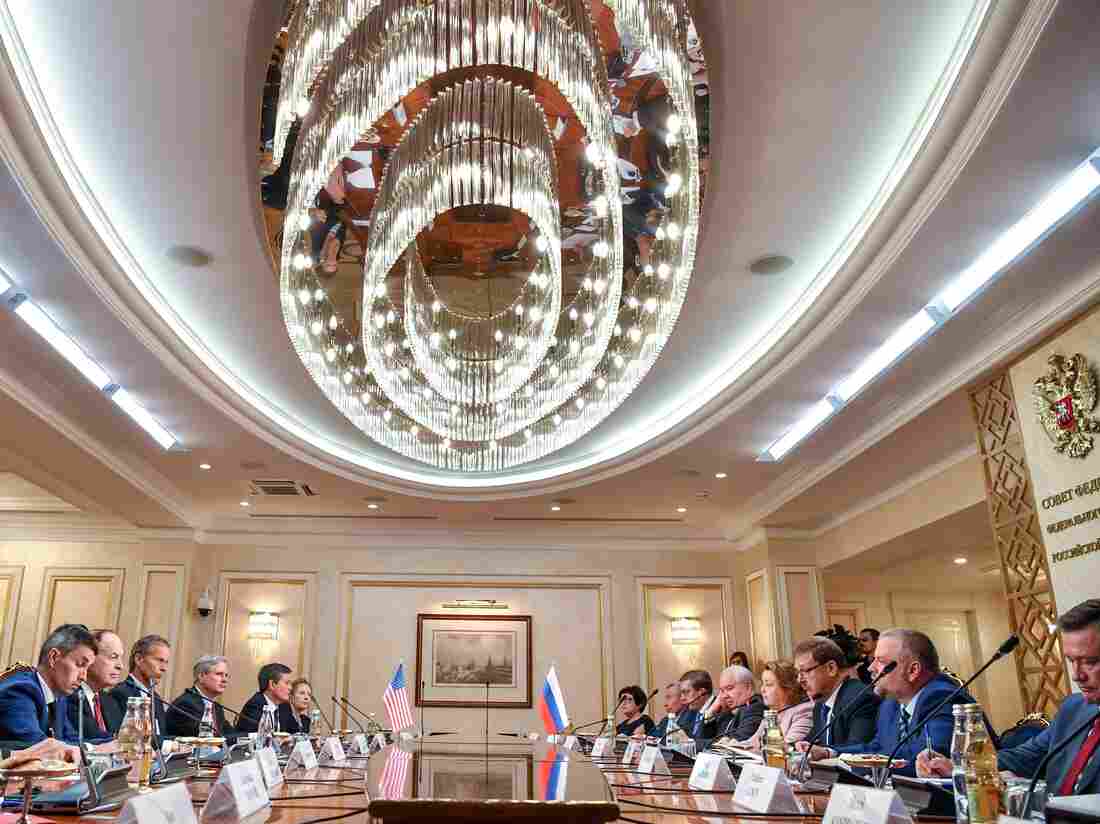 Members of a U.S. congressional delegation meet with members of the Russian Federation Council in Moscow on Tuesday. Republican senators met with Russia’s Foreign Minister Sergei Lavrov on a rare visit to Moscow ahead of a summit between the countries’ presidents Vladimir Putin and Donald Trump. Yuri Kadobnov/AFP/Getty Images hide caption 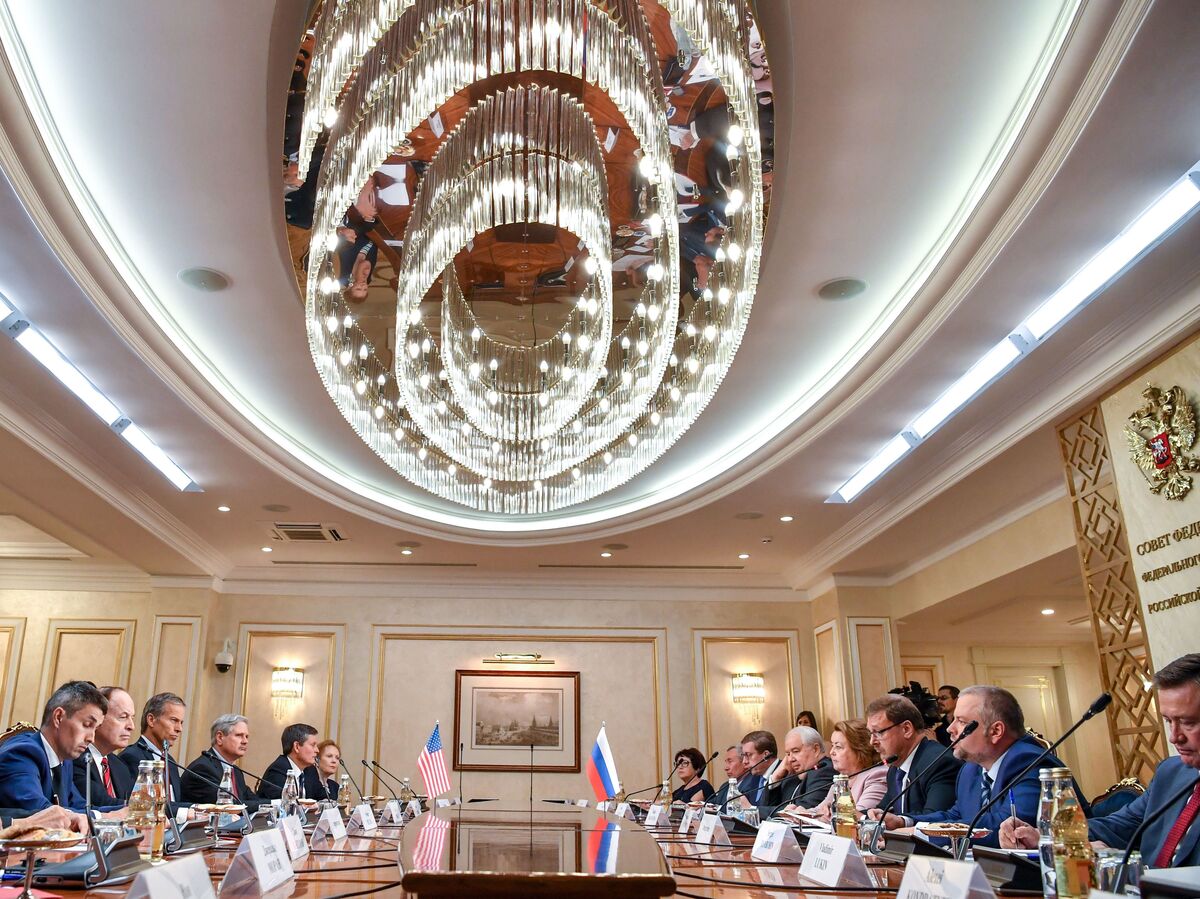 Members of a U.S. congressional delegation meet with members of the Russian Federation Council in Moscow on Tuesday. Republican senators met with Russia’s Foreign Minister Sergei Lavrov on a rare visit to Moscow ahead of a summit between the countries’ presidents Vladimir Putin and Donald Trump.

As guests arrived at the U.S. ambassador’s residence for the annual Independence Day party in Moscow on Wednesday, the band onstage was covering songs by the rock group Chicago.

“Only the beginning!” the lead singer belted out as local dignitaries juggled hotdogs, tacos and cocktails across a soggy lawn. The buoyant lyrics seemed symbolic of President Trump’s quiet détente with Russia as he prepares for the first full-fledged summit on July 16 with Russian President Vladimir Putin.

Among the guests of honor was Sen. Richard Shelby of Alabama, leading the first congressional delegation to Russia since the annexation of Crimea in 2014. The visit came days after Putin hammered out the details of the summit with Trump’s national security adviser John Bolton, who a year ago warned that the U.S. negotiates with Russia “at its peril.”

“We know that we need a new beginning, that we can go over recriminations on both sides for days in,” Shelby said Tuesday at the Federation Council, Russia’s upper house of parliament. “But I believe Russia and the United States and the world will be a lot better off if we improve our relationship. Perhaps it won’t be a utopia. Most marriages are not utopia. But an improvement, gosh, I hope so.”

The visit by the seven senators and one congresswoman – all Republicans – was planned months before the announcement of the presidential summit taking place in Helsinki, Finland. But the fact that the trip even went ahead is a first sign of an unexpected thaw in relations following renewed economic sanctions on Russia, tit-for-tat diplomatic expulsions and a freeze in day-to-day contacts between the two governments.

The delegation avoided publicity, with none of the eight lawmakers tweeting from Russia about their trip. Several, such as Sen. John Thune of South Dakota and Sen. John Kennedy of Louisiana, posted generic Independence Day greetings from Moscow.

Kennedy explained the delegation’s low profile resulted from a desire not to make waves ahead of the summit. “We certainly don’t want to do anything to adversely impact that meeting, we want to try to enhance it,” he told NPR.

In April, Trump tweeted that relations between the U.S. and Russia were at their worst ever. What has changed since then is unclear.

“It’s not what’s changed. It’s what could change in the relationship, and that has to be earned, and it’s a step-by-step deal,” Shelby said in an interview. “At the moment, we have a very strained relationship with the Russians.”

While Trump has consistently accepted Kremlin denials of U.S. election interference, senators in the delegation said it was one of the top issues they brought up with Russian officials. On Tuesday, while the lawmakers were in Russia, the Senate intelligence committee reaffirmed U.S. intelligence agencies’ assertion of Russian interference in the 2016 election.

“In every meeting that I was in, I raised the topic of election interference,” Sen. Jerry Moran of Kansas told NPR. “We want to make certain that kind of interference doesn’t occur in 2018 or 2020 or beyond.”

Kennedy warned that if Russia continues to try to influence U.S. elections, “it’s going to be very difficult, if not impossible, to establish a better relationship.”

Other issues they discussed were Russia’s involvement in conflicts in Ukraine and Syria, as well as arms control. After their last sit-down in Moscow, Shelby said there were “no concrete plans yet, but positive meetings.”

The last time a U.S. president tried to put aside differences with the Kremlin was in 2009, when President Obama initiated the so-called “reset,” an effort to focus on areas of common interest and seize on the cooperation offered by Dmitry Medvedev, a Putin loyalist who was serving as president to help Putin fulfill a rule on term limits. When Putin returned to the presidency in 2012 amid anti-government protests that he blamed on the U.S., the “reset” was over.

Russia’s subsequent military intervention in Ukraine put relations on a downward curve, and U.S. accusations that the Kremlin tried to influence the 2016 election sent them into a tailspin – despite Trump’s sympathy for Putin.

Now relations appear to be improving.

“I wouldn’t use the term ‘reset.’ I think that’s fallen down the drain quite a bit,” said Shelby. “I would think ‘a new day.’ Can we bring about a new day, a new tone? Could we find areas of cooperation? It will be set, I believe, by our two presidents.”

Masha Lipman, a political analyst in Moscow, cautioned that the Kremlin was unlikely to change its behavior just because of a new tone in relations.

“Even if we’re in for some kind of rapprochement, Putin’s stance is going to be: ‘We did nothing wrong, there’s nothing we’d like to correct. If America wants to change its stance, you’re welcome, we’ve always wanted to cooperate,'” Lipman said.

One of the main movers behind the congressional delegation’s visit was Jon Huntsman, a former Utah governor whom Trump appointed ambassador to Russia last year.

An earlier delegation visit planned for January was canceled after one of its members was denied a Russian visa. This time, the Russian ambassador in Washington, Anatoly Antonov, informed Russian state media that the delegation’s visas had been issued and called the visit an “important signal.” Among the eight members were also Sen. John Hoeven of North Dakota, Rep. Kay Granger of Texas, Sen. Steve Daines of Montana and Sen. Ron Johnson of Wisconsin. Asked why there were no Democrats, Shelby said, “Some days, we don’t travel bipartisan.”

Their trip began last weekend in Russia’s imperial capital St. Petersburg, where they were welcomed by Gov. Georgy Poltavchenko, a former KGB officer and Putin ally, who told the visitors that his city was open to developing “positive relations with the U.S.”

In Moscow, the delegation met with Foreign Minister Sergei Lavrov and the speaker of the Duma, or the lower house of parliament, Vyacheslav Volodin. At the Federation Council, they met with lawmakers including Konstantin Kosachyov, head of the foreign relations committee, and Sergey Kislyak, the Russian ambassador to Washington during the 2016 election. Both Volodin and Kosachyov have been sanctioned by the U.S. for their proximity to Putin.

“There was much we didn’t agree on, we argued,” Kosachyov told reporters. “But we agreed that it’s necessary to renew dialogue to give a basis for better understanding between our nations.”

Shelby rejected any suggestion that his delegation hadn’t been tough enough.

“We weren’t making conciliatory remarks, we were making candid remarks on serious issues,” he said. “None of them have been resolved, but we put them on the table to talk about, and I think that’s healthy.”

The next step, he said, is the Trump-Putin summit.