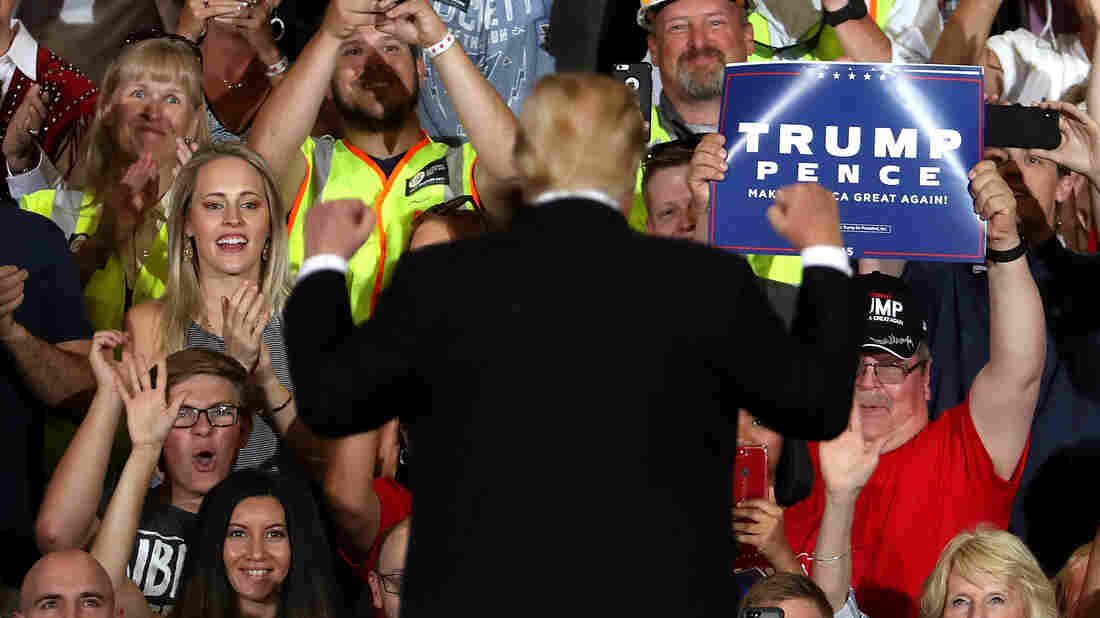 Supporters cheer for President Trump during a campaign rally on July 5 in Great Falls, Mont. Interviews with over 50 Republican voters show satisfaction with the president’s accomplishments and enthusiasm about this year’s election. Justin Sullivan/Getty Images hide caption 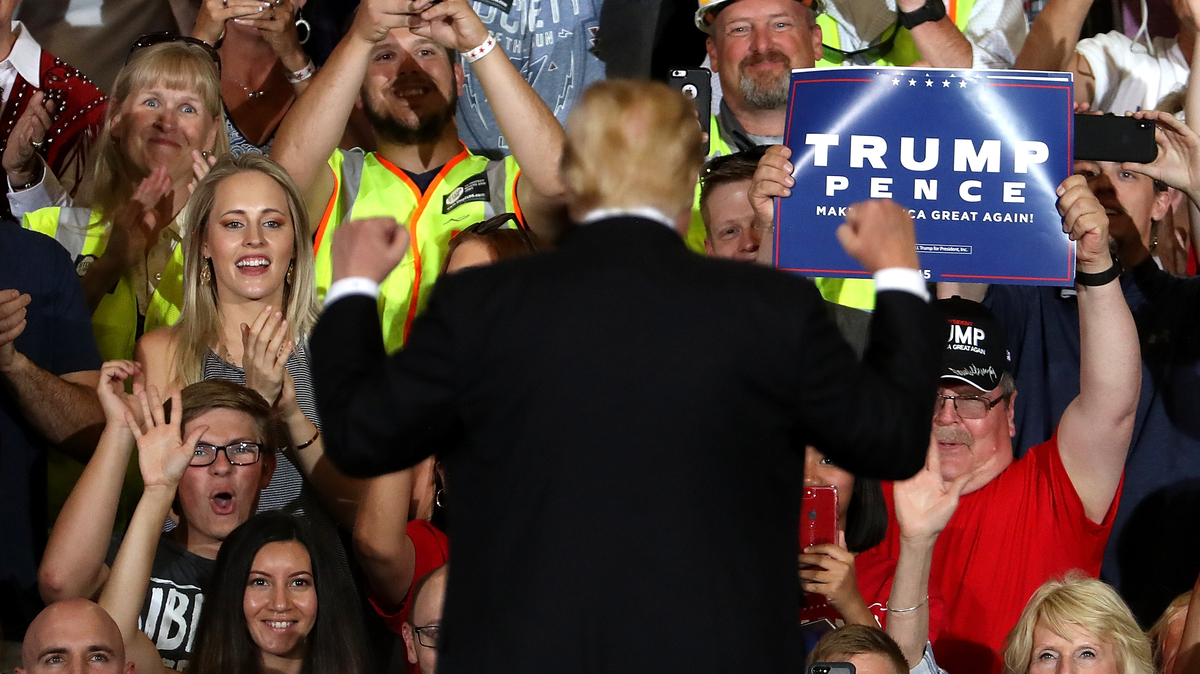 Supporters cheer for President Trump during a campaign rally on July 5 in Great Falls, Mont. Interviews with over 50 Republican voters show satisfaction with the president’s accomplishments and enthusiasm about this year’s election.

Ultimately Davis voted for Trump, mainly because he was worried about the tilt of the Supreme Court. With the nomination of another conservative justice expected on Monday, following the confirmation of Neil Gorsuch in 2017 and a large reshaping of the federal judiciary overall, Davis is getting what he had hoped for.

So with time, his tepid support has morphed into a wholehearted embrace of the president.

Despite other clear signs of Democratic enthusiasm, in the form of high voter turnout in the primaries and large-scale protests of the president, there are increasing indications that Trump’s powerful base might offset some of that energy and protect the GOP’s power in Washington by denying Democrats the 23 additional House seats or 2 additional Senate seats needed to win control of either chamber.

Trump is a bigger factor in midterm preferences — positive or negative — than any other president in the last three decades, according to Pew’s research.

President Trump has a near 90 percent approval rating among Republicans. His popularity near the 500-day mark among his own party is higher than any other president since World War II, with the exception of George W. Bush in the aftermath of the 9/11 attacks.

Republican strategists and even party leaders say the GOP has morphed into “Trump’s party,” where the litmus test for admission is loyalty to the president, derided by retiring GOP Sen. Bob Corker as “a cultish thing.”

But with Trump’s name not on the midterm ballot, the question is whether the coalition he built will stay together this November.

In interviews with over 50 Republican base voters across Ohio, West Virginia and Georgia in recent months, NPR found widespread enthusiasm for the president that could fuel voters in November.

Between immigration, trade, tax cuts and Supreme Court picks, the President has satisfied distinct parts of his coalition and given them each a reason to come back for more this November. Reactions from voters in four discreet blocs of Trump supporters show why.

Jason Loudermilk, a mission strategist with the West Metro Baptist Association in Georgia, wrote in a candidate in 2016 because he didn’t feel comfortable voting for Trump. “I wasn’t sure he was as pro-life as he said he was,” said Loudermilk.

But he said the appointment of Gorsuch proved Trump’s conservative principles.

“Knowing what I know now, if I had it do over again, and nothing changes in the next two years, I’m planning to vote for him for re-election,” said Loudermilk.

In fact, the balance of the Supreme Court largely solidified white evangelical support behind Trump during the 2016 campaign. And so despite ongoing stories about Trump’s personal lifestyle, these days even initial skeptics like Loudermilk have become convinced Trump is on their side.

White evangelicals support the President far more than the general public. An April poll from the Public Religion Research Institute showed 75 percent of white evangelicals have a positive opinion of Trump. In comparison, the president’s overall approval rating is currently around 42 percent.

“I’ve been amazed at his accomplishments, particularly as you consider all the opposition that he has had from Republicans as well as Democrats, the man is just fighting battles, one battle after another of opposition,” said Donald Voyles, 83, a pastor at Unity Baptist Church.

And while some evangelicals continue to have reservations about Trump’s morality and character, many say now they agree with his policies.

“As an individual, there are certain things about him that I don’t love, but, I really do believe he is genuine in that he is trying to better America for the future,” said Kristen Cohran, 22, a political science major at Cedarville University, a Christian college east of Dayton, Ohio. 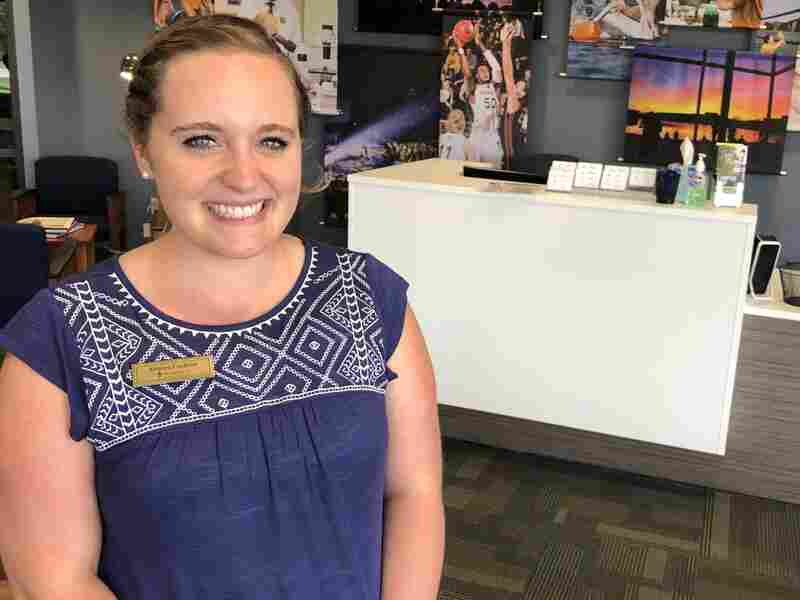 Kristen Cochran, a senior at Cedarville University, a christian college in Ohio, said the President can sometimes be “crass,” but she likes how he’s governing. Asma Khalid /NPR hide caption 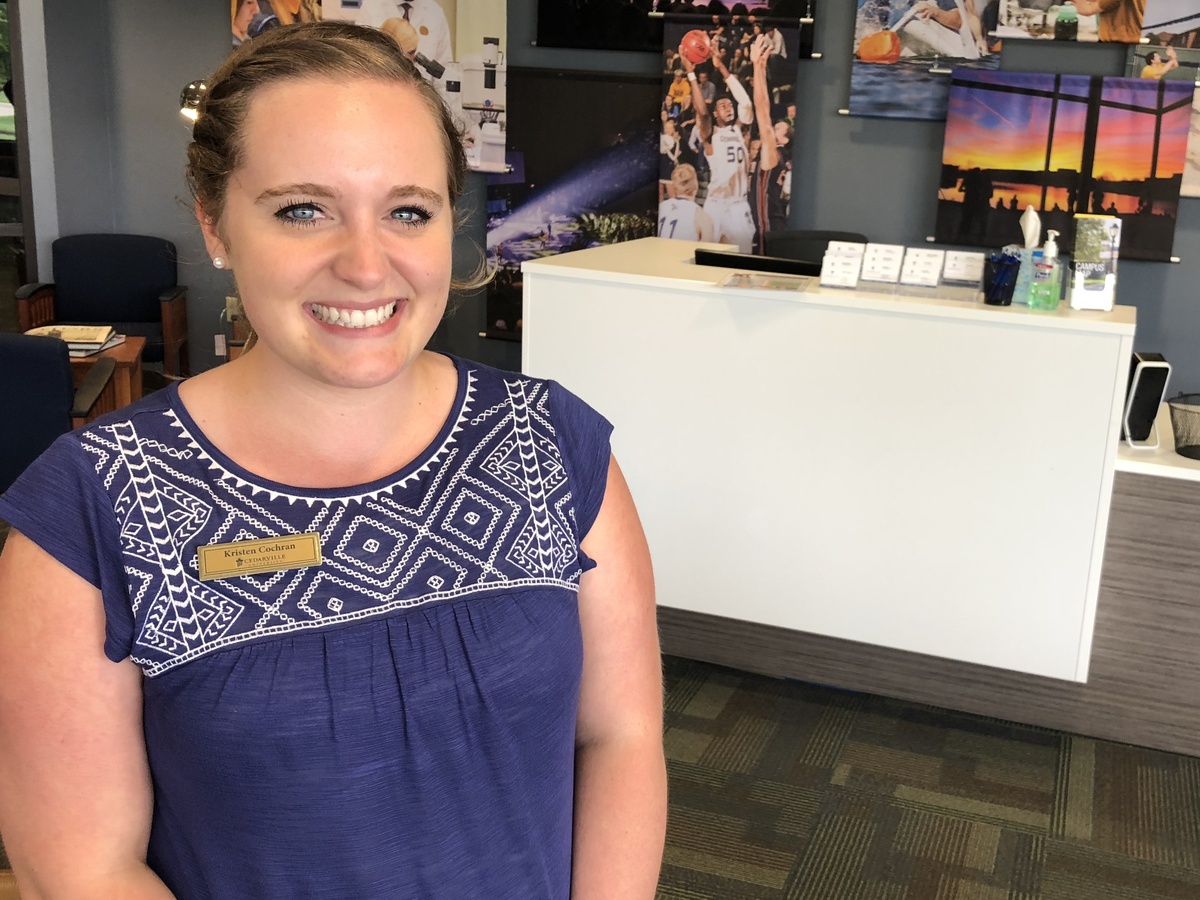 Kristen Cochran, a senior at Cedarville University, a christian college in Ohio, said the President can sometimes be “crass,” but she likes how he’s governing.

She still worries that the President is sometimes “crass,” and she wishes he would start acting more presidential, but she said her Christian faith is the most important factor in her politics.

And, thus far, Trump has delivered.

“I think there’s things he’s working toward, especially crack down on Planned Parenthood, and potentially revert to some of the past prohibitions on abortion,” said Cochran.

White working-class voters supported Trump over Hillary Clinton by a two-to-one margin. In particular, white working class men were among the president’s strongest supporters. But their concerns were not solely economic.

Polling has shown that blue-collar voters who supported Trump had deep anxiety about cultural displacement, more than economic volatility.

“Pretty soon it’s gonna cost us more and more and more to live here in this country because we’re keeping them people and feeding them,” said James Weekley, referring to immigrants. Weekley, 89, is a retired baker NPR met in Ohio while following Working America, a labor group affiliated with the AFL-CIO, as it canvassed a Columbus neighborhood.

Part of Trump’s strategy for maintaining power is to give each plank in his coalition something they want, in the hopes they’ll keep coming back for more.

Widespread deportations may not be popular among the general public, but they are incredibly popular among a core group of Trump’s supporters.

“He’s sending some of the foreigners back to where they belong,” said Weekley.

Over a fifth of Ohio voters are white, working-class men, and while trade and tariffs matter to some, the cultural grievances Trump has tapped into resonate just as deeply.

Billy Neibler, a welder in Grove City, Ohio, didn’t go to college, but he gets riled up when he hears stories of college campuses creating so-called “safe spaces” for minorities to talk about their feelings of marginalization. “You gotta have a safe space?” he asked incredulously. “You know, I get burned all day long. I get burns, I get cuts. I’ve been called names, and you just say something back or maybe you got into a fist fight over it.” 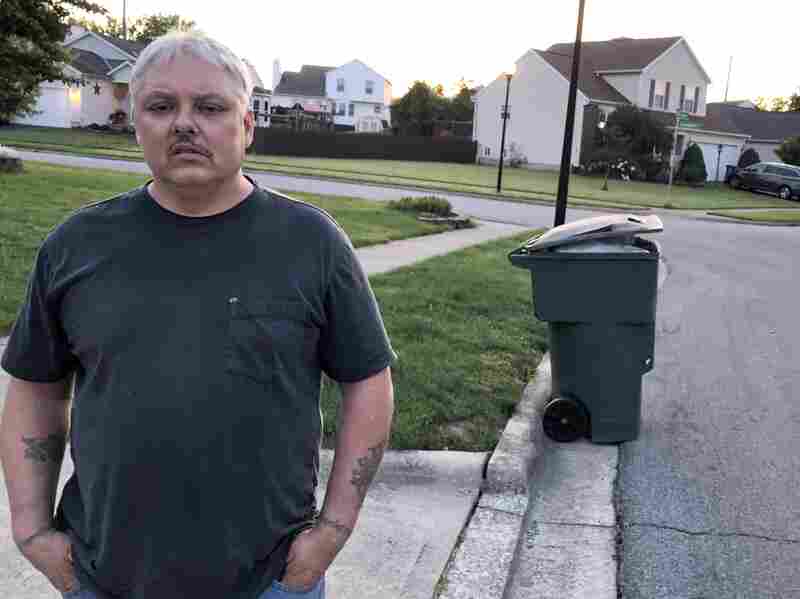 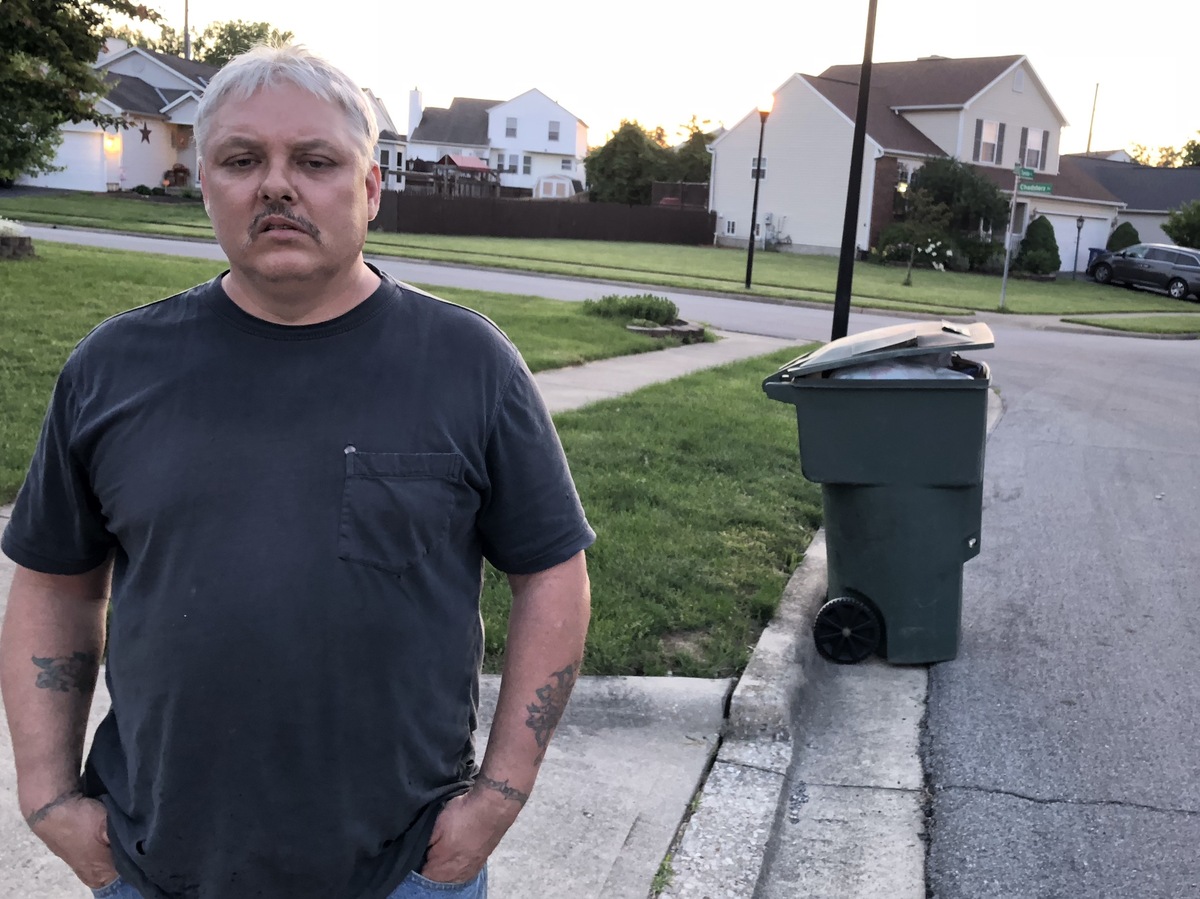 “I’m gonna say if he keeps doing what he’s doing, he’ll be the best president of my lifetime,” Billy Neibler said referring to Trump.

Neibler is from Kentucky, but he’s lived in Ohio for years. Still, he has at least three Confederate flags in his garage, one giant one hangs on the wall, proclaiming “The South Will Rise Again.”

Neibler says the country has gotten soft, and he blames Democrats.

Part of Neibler’s frustration is tied to entitlement programs. He feels like Democrats want to give stuff away to lazy people for free. And he says that’s unnecessary because there are plenty of jobs in Ohio.

Like many GOP voters, he credits President Trump for a healthy economy, and he insists he’s got more business than he’s ever had. But his admiration for Trump isn’t just about taxes and jobs, it’s about power and personality.

“I’m gonna say if he keeps doing what he’s doing, he’ll be the best president of my lifetime,” said Neibler.

Another key part of the Trump coalition are veterans. They broadly supported the president in 2016, and many remain thoroughly satisfied with his job performance.

In interviews with about a dozen veterans in West Virginia, a state with one of the highest proportion of veterans in the country nine percent of the population, there is widespread support among Republican veterans for the president’s policies.

“I think he’s done a great job,” said Rudy Varney, a Vietnam War veteran in Logan County, West Virginia. “He got the [budget] increase for the military. And our soldiers.” 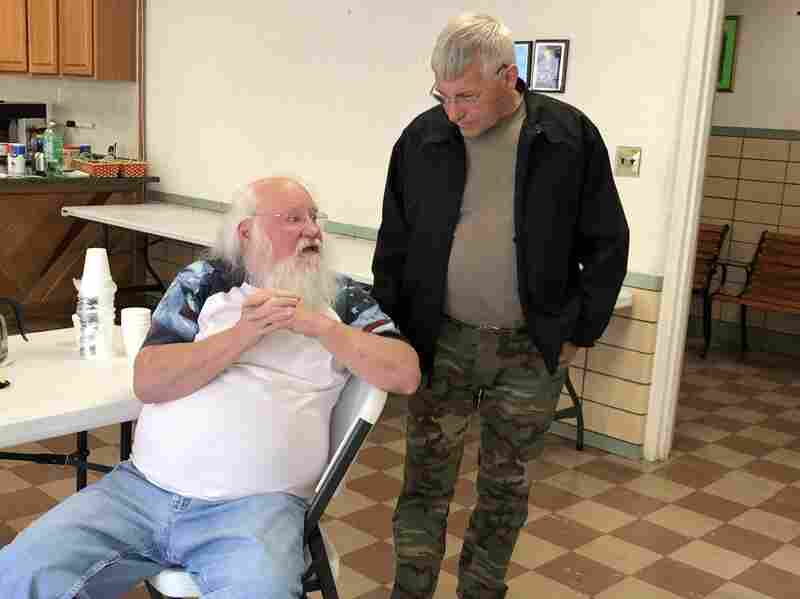 Troy “Rudy” Varney, a Vietnam War veteran from southern West Virginia, says he thinks the president’s idea of a military parade on Veterans Day is a “great idea” and that the president has “the heart” of veterans. Asma Khalid/NPR hide caption 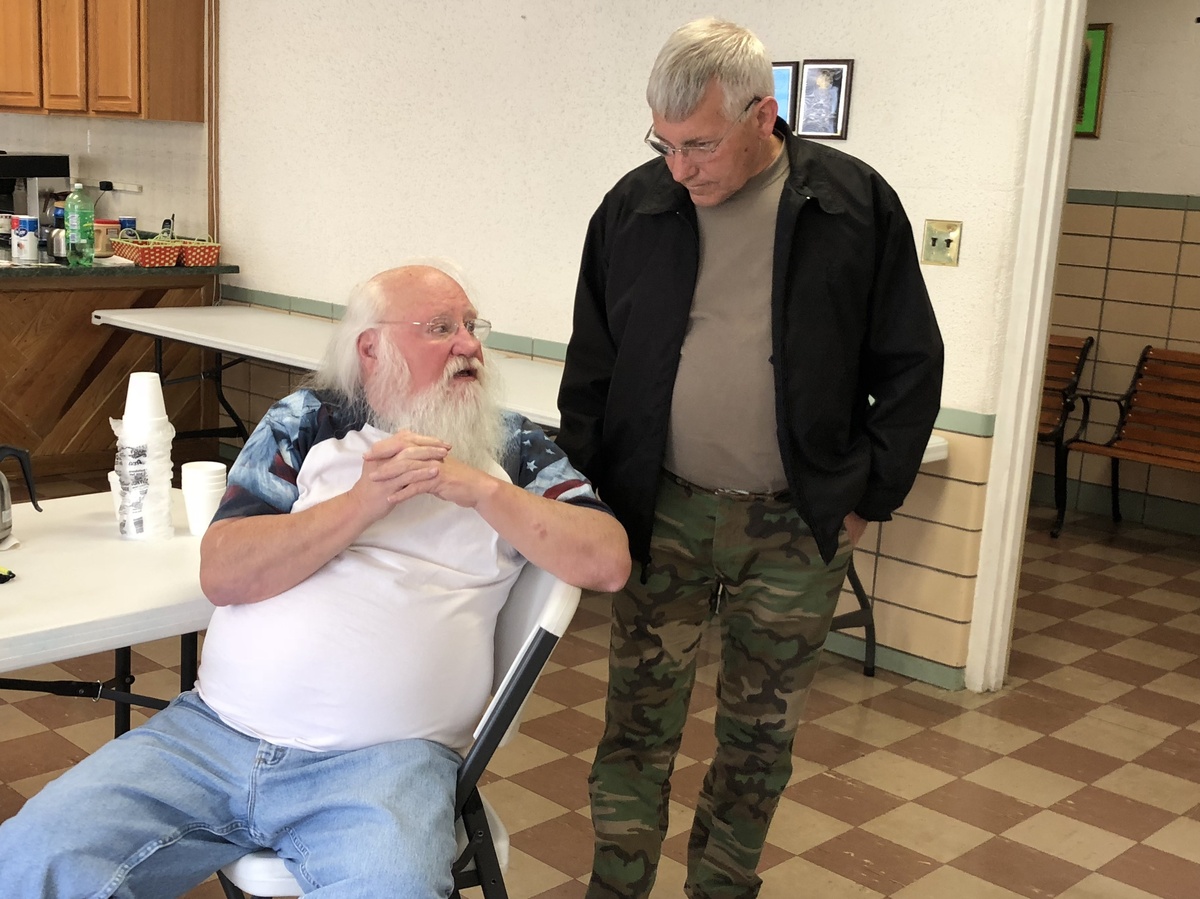 Troy “Rudy” Varney, a Vietnam War veteran from southern West Virginia, says he thinks the president’s idea of a military parade on Veterans Day is a “great idea” and that the president has “the heart” of veterans.

But for Varney, his appreciation of Trump is not just about money — it’s about prestige. He loves the President’s idea of a military parade on Veterans Day.

“All the other countries do that,” he said. “That doesn’t mean we went plum crazy and ready to raid people’s homes or nothing. That’s just showing our military force. And letting the public know what the military is all about and their weapons.”

The parade is popular, in part, because it seems to demonstrate how Trump feels about the military. “President Trump seems to have the heart of veterans,” said Donnie Wells, another Vietnam War veteran. “He’s done more in the short time he’s been in office than any of the other presidents… as far as being up front and vocal about the veterans.”

But the question of how this will translate to the midterms is unclear. Multiple Trump voters also praised Sen. Joe Manchin, D-W.Va. for fighting for veterans issues. Manchin is a well-known retail politician, and one GOP voter specifically cited a health issue that he said Manchin helped him resolve.

The President performed worse than many of his GOP predecessors with one traditionally Republican demographic — white, college-educated voters. But those that did vote for him have found a reason to love him more than before.

“He’s done a great job for the economy,” said Sam Ehlers, a tech worker in Cobb County, Ga. “Unemployment is low, taxes have been reduced, businesses are investing and hiring.”

The tax cuts are almost universally popular among Republicans in the affluent suburbs of Atlanta, with manicured lawns and luxury cars.

But there is evidence that, while Trump is solidifying his support with his base, perhaps, he is not broadening it.

“I did vote for Trump, and now, it’s like I think, ‘What did I do?'” said Charlene Kratz, a teacher who was having an early dinner with a liberal friend in Marietta Square. “I’m not happy with the way things have gone with him… he’s said so many racist things.”

Kratz says that, in hindsight, she thinks the country would have been better off with Hillary Clinton.

But Kratz is the exception — the only Republican voter in more than 50 interviews to express regret about voting for the president.

The President has given each of his core constituencies at least a dose of satisfaction, enough that they’re willing to overlook what they don’t like.

Davis, the former Dunwoody mayor, for example, says he doesn’t like the president’s behavior on Twitter. But he’s found a way to justify it.

“I think (it’s) an excellent way for him to deal with a news media that is hellbent on destroying him,” said Davis. “So many reporters have made it clear that their mission is to impeach him, get him declared mentally deficient, whatever they’re trying to do.”

This frustration with media coverage wasn’t unique to Davis. In multiple interviews, GOP voters insisted “the media” were on a mission to destroy the president, not giving him credit for a healthy economy or negotiations with North Korea.

And the more criticism Trump receives, the more fiercely his defenders protect him, the more loyal they become, and the more eager they are to interpret the midterms as a referendum on the President — that they want to answer with a vote for Republicans.