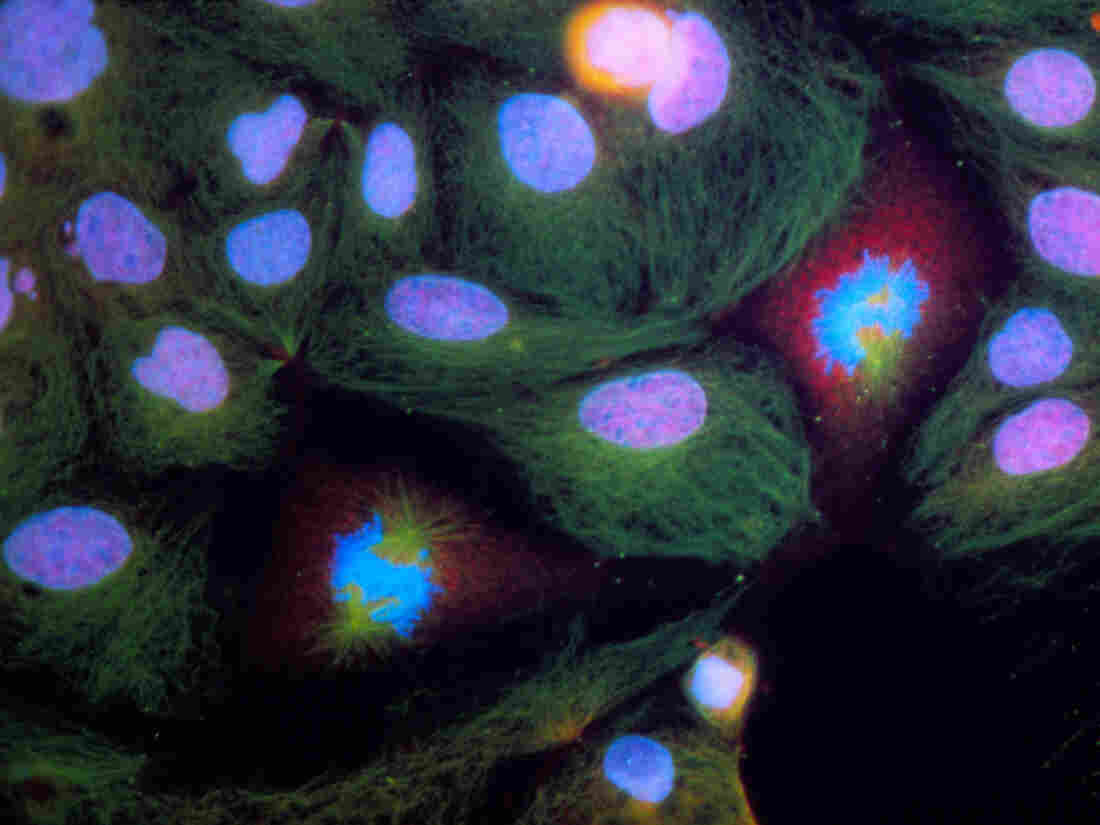 Immunofluorescent light micrograph of human colon cancer cells, highlighting the nucleus of each cell in pink. U.S. doctors have been seeing an increase in colorectal cancer cases — and deaths — among people under age 50. SPL/Science Source hide caption 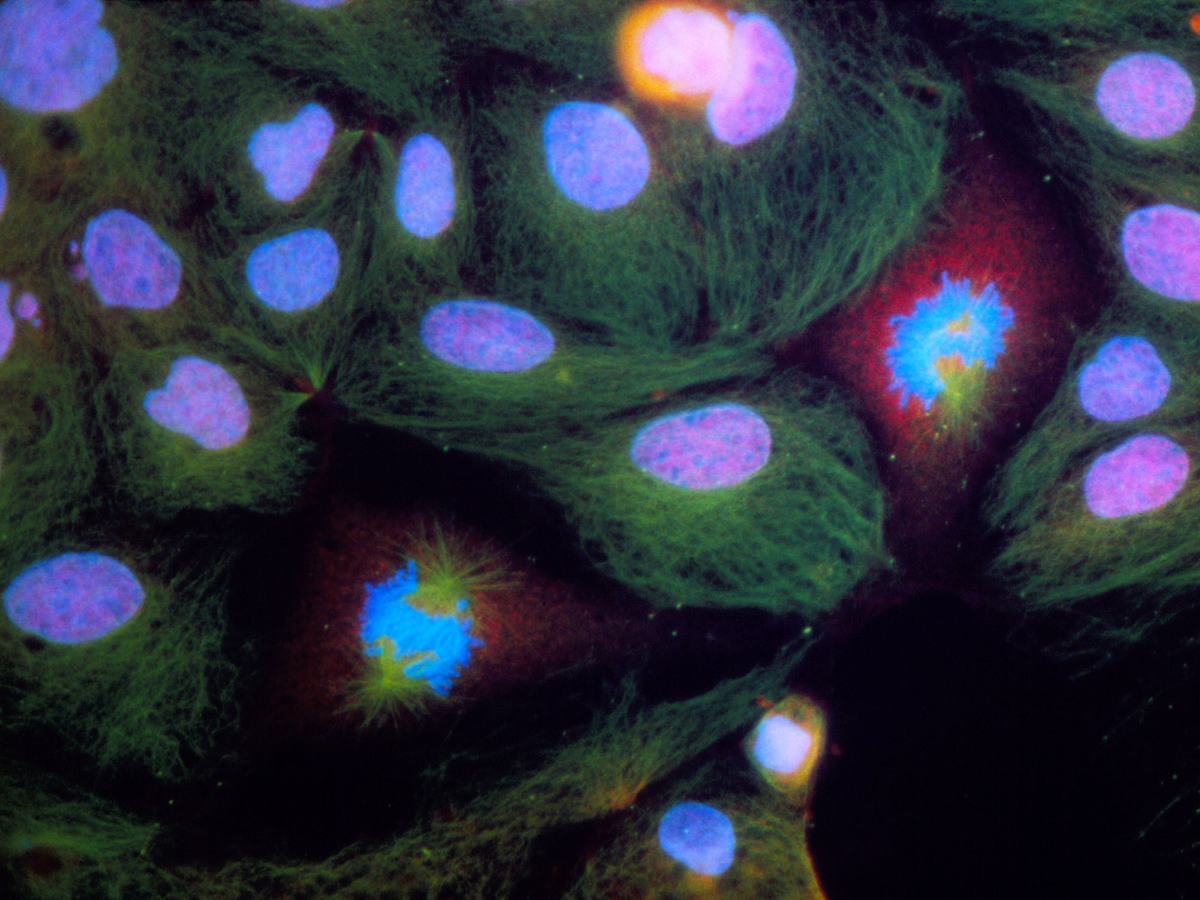 Immunofluorescent light micrograph of human colon cancer cells, highlighting the nucleus of each cell in pink. U.S. doctors have been seeing an increase in colorectal cancer cases — and deaths — among people under age 50.

Colorectal cancer is the second-leading cause of cancer death in the United States, most frequently diagnosed among adults over 65. To catch those typically slow-growing malignancies early, when they can often be cured, most doctors’ groups recommend colorectal cancer screening starting at age 50.

But the American Cancer Society this week changed its advice and is recommending that screening start five years earlier.

“There is compelling evidence that the optimum age to start is now 45,” says Dr. Richard Wender, chief cancer control officer of the society, who cites a sharp increase in deaths from colon and rectal cancers among men and women under age 50.

“People born in the ’80s and ’90s are at higher risk of developing colon cancer, particularly rectal cancer, than people born when I was born back in the ’50s,” Wender says.

“We just have to face reality,” says Wender. “We just don’t know why it’s increasing.”

Some of the increase could stem from the increase in obesity in the U.S., a known risk factor for colorectal cancer, he says.

“But we don’t think that explains the entire change,” he adds. “There is a great deal of interest and a lot of research beginning to try to answer that question.”

So far, other groups are maintaining their recommendation that colon cancer screening start at age 50, including the U.S. Preventive Services Task Force, an independent, volunteer panel of national experts in disease prevention and evidence-based medicine.

Stanford University internist Douglas K. Owens, the task force’s vice-chairperson, says the group’s 2016 recommendations were based on extensive review of the benefits and harms of colorectal screening at the time.

“There was limited data on screening people under age 50,” Owens says. The new American Cancer Society guidelines, he adds, should prompt more research into the relative benefits and harms of screening among younger people.

Dr. Robin B. Mendelsohn, a gastroenterologist at Memorial Sloan Kettering Cancer Center in New York, says there’s been an “alarming” increase in cancer among younger adults. She’s the co-director of the recently established Center for Young Onset Colorectal Cancer there.

Over the last 10 years, Memorial Sloan Kettering has seen 4,000 new colorectal cancer patients under age 50, she says. Many of them did not have traditional risk factors such as obesity, smoking, alcohol, physical inactivity or a diet high in fat or low in fiber.

“Anecdotally, when you talk with these patients, [some] are marathon runners who don’t eat red meat, don’t smoke, do everything ‘right’ and say ‘why did this happen to me?’ ” she says.

Often, they tell her they’ve seen multiple doctors because of rectal bleeding, but have been told, since they’re under 50, they “can’t have cancer.” That’s clearly not the case, she says.

Ongoing studies are looking at a multitude of factors that might be contributing to the earlier cancer incidence. Potential culprits include over-the-counter anti-inflammatory medicines, antibiotics and antidepressants, as well as multiple vitamins, probiotics and other dietary supplements.

The new recommendations should bring greater attention to the value of screening, says Mendelsohn, who suggests that future studies investigate whether even younger people — in their early 40s or even 30s — should be screened.

A first colon cancer screening does not have to be a colonoscopy. In its new recommendations, the cancer society recommends choosing from one of six screening tests, which are also currently recommended by other expert groups. The guidelines don’t prioritize among screening choices.

The choices include three at-home kits that test stool for blood.

These kits need to be ordered by a doctor; primary-care providers often have them on hand in the office to give to patients, Wender says, or they may be mailed.

“It’s done in the privacy of your own home,” he says. Patients mail the sample to a research facility which tests for microscopic blood.

If the test is positive, a colonoscopy is recommended, Wender says, but only one in five people test positive for blood in their stool.

Typically, these home stool blood tests are repeated every year for good results.

Alternatively, some patients opt for what’s called a “virtual” colonoscopy — essentially a CT scan of the colon — which should be done every five years, according to the new recommendations.

Another approved option is a flexible sigmoidoscopy, which looks at the lower part of the colon, and is followed up by a colonoscopy if polyps are found.

A positive result picked up in these screening tests is typically followed up by a colonoscopy, which uses a tiny camera to investigate the entire colon. It is not only a search for early cancer; more often than not, Wender says, it detects pre-malignant, suspicious lesions, or polyps, which are removed during the procedure.

“When we find and remove polyps we actually prevent any future chance of that developing into cancer,” he says.

Despite the high cure rate when colon cancer is caught early, only one-third of the Americans over 50 get screened.

The American Cancer Society says it endorsed the full range of screening tests “without preference” in order to improve the rate of screening. In its latest advice, the Preventive Services Task Force says head-to-head comparison studies have shown that no one screening test is more effective than another in early cancer detection.

While they differ on the age of first screening, both groups suggest that screening over age 75 should be a joint decision between patient and doctor. And after age 85, screening is no longer necessary, the doctors’ groups agree. That’s because the risk of colonoscopy among this elderly population can outweigh any benefit.