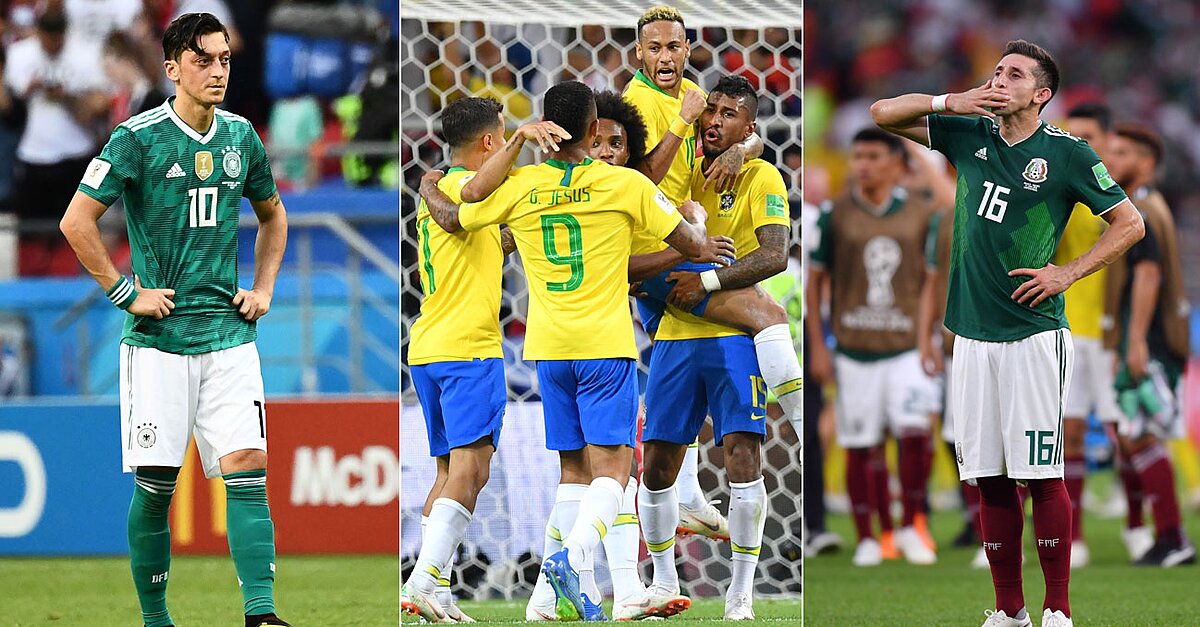 MOSCOW — Day 14 of World Cup 2018 is done, and it will be remembered for defending champion Germany going out in the group stage—the fourth time in the past five World Cups that has happened—in a 2-0 loss to South Korea; for Mexico hanging on to survive with Korean help despite losing 3-0 to Sweden; and for Brazil and Switzerland maintaining their spots atop Group E to advance to the knockout rounds.

Here are my five thoughts on Day 14:

• The World Cup is a young man’s game, Jogi Löw

Germany’s unprecedented World Cup faceplant—the Germans had never failed to advance from the group before—was marked by a midfield that was too old and too slow and a front line that didn’t have nearly enough precise finishing.

Sami Khedira, at age 31, didn’t have the legs to play his central midfield position anymore, and Mesut Özil, at 29, was not nearly as vibrant as he had been in previous World Cups. Coach Jogi Löw’s decision to leave the skillful and speedy 22-year-old winger Leroy Sané off the squad was a head-scratcher at the time and only looks more curious today.

Timo Werner also needed to have a front-line partner from the start of games. He clearly played better when he had one (even though it was an older player, the 32-year-old Mario Gómez). Long story short: Germany deserved to go out, and this giant failure is a lesson that youth can prevent staleness.

It’s too easy to say that Mexico got lucky when South Korea upset Germany 2-0 to keep Mexico alive and knock out the defending champion Germans despite Mexico’s 3-0 defeat to Sweden.

Yes, it has to be frustrating for Mexico that it had control of its own destiny and failed to execute. But the only reason Mexico was in a position to benefit from South Korea was by winning its first two games against Germany and the Koreans. Now Mexico needs to regroup, start the slate clean and try to correct some of the problems that were clear against Sweden. To wit: The back line needs to tighten up, as does the defensive effort around the entire field. Sweden was able to create too many scoring chances, and Mexico won’t be able to have this kind of margin for error moving forward if it wants to reach the famed quinto partido–especially against Brazil in the round of 16.

• Sweden’s decision to go without Zlatan is vindicated

The Swedes will rarely be mistaken for an electrifying squad, but they were extremely effective in a 3-0 win against Mexico that gave them first place in Group F. At one point I had argued that all other things being equal, Zlatan Ibrahimovic would be a needed upgrade at the forward position. But I was wrong. Ibra, who decided on his own years ago to retire from the national team, would have been an unnecessary distraction inside a team that earned its way to this World Cup by beating Italy in the UEFA playoffs.

Sweden coach Janne Andersson seems like the only angry Swede in existence—has he ever smiled?—but he deserves a lot of credit for sticking with his guys and not bowing to any calls for Zlatan to be included.

On paper, one side of the knockout-rounds bracket has far more powerhouse teams than the other side.

As of Wednesday, one side had: Uruguay-Portugal, France-Argentina and Brazil-Mexico. The other side had: Spain-Russia, Croatia-Denmark and Sweden-Switzerland (which makes you wonder, with the loser of Belgium-England falling on the latter side, will either really want to win Thursday’s Group G finale?). Don’t get me wrong: These spots were earned on the field. But on paper, based on talent, Spain is in a dynamite position to make a deep, deep run while the huge names on the other side of the bracket beat the tar out of each other.

On each of the last three matchdays, at least one set of simultaneous group finales has produced incredible late-game drama. That happened in the earlier game window on Wednesday, but Brazil took care of business to beat Serbia and prevent any unexpected results in Group E. Paulinho scored after one of his trademark bombing runs from the midfield (thanks to a terrific pass from Philippe Coutinho) and Brazil kept going from there, with Thiago Silva providing the insurance.

Now we’ll get to see Brazil-Mexico, a game that will require Mexico to forget what happened on Wednesday and recenter itself against a Brazil team that it has performed credibly against in recent years. Given his importance to Brazil, Marcelo’s apparent back injury, which forced him out in the 10th minute vs. Serbia, looms as a big storyline, though Filipe Luis fared well in his place.