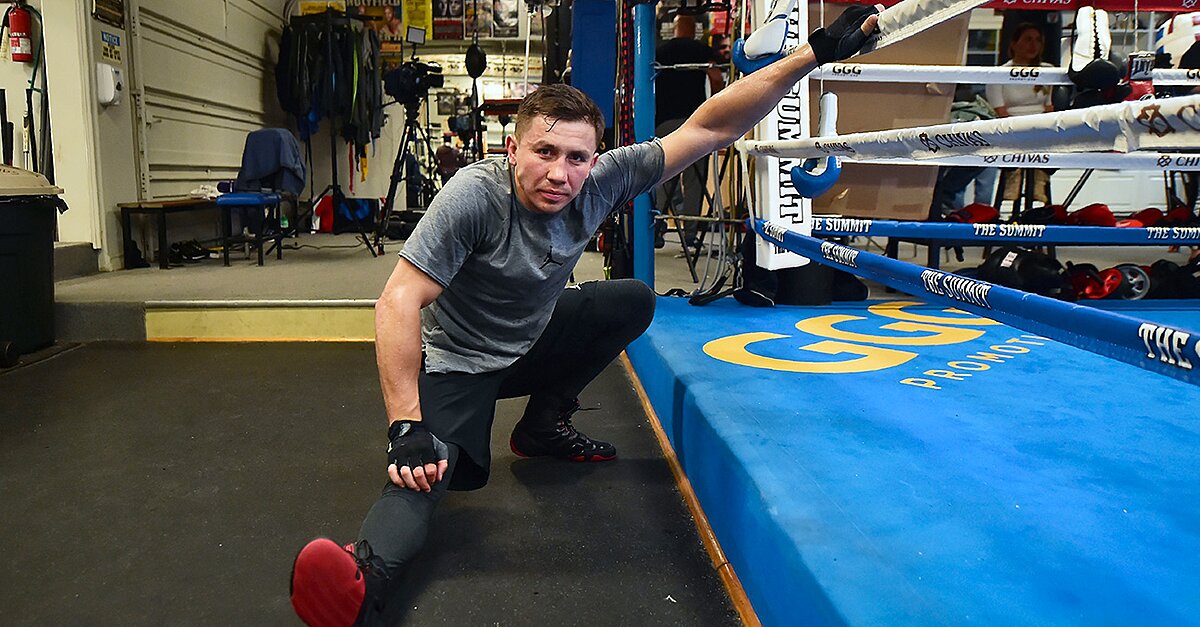 It was late March and Gennady (GGG) Golovkin had retired to a Mexican restaurant in Big Bear, Calif. For a random Tuesday almost seven weeks from his next fight, it had been an unexpectedly busy and controversial afternoon.

Golovkin sat down in the back, at a 12-person table, his training team spilling into the seats nearby. A flat-screen television was mounted high on the wall behind him, and as the non-boxers in the group ordered margaritas and the boxers ordered water, he did not notice his name scrolling across the ticker. He then ordered … a steak … at a Mexican restaurant … on that day of all days.

In the three hours before that meal, Golovkin had accused his next opponent, Saul (Canelo) Alvarez, of being a dirty fighter who was coddled by various boxing commissions in the most corrupt of sports. Golovkin believed he had clearly beaten Alvarez in their Sept. 2017 bout, which was ruled a split draw. He knew that Alvarez had tested positive for the steroid clenbuterol in advance of their rematch, and he also knew that Alvarez had blamed contaminated Mexican meat for his test result. “Come on,” Golovkin had said in regard to the explanation, and he said that not in front of one writer but roughly 10 who had come to The Summit Gym for one of boxing’s ubiquitous “media days.”

News of Golovkin’s claims spread quickly. The other writers left to write their stories, and as I sat there, typing in a folding chair near the gym’s treadmills, the damage control began. Golovkin did two phone interviews with prominent boxing journalists in which he tried to walk back what he had said only minutes earlier. He showed me videos on his cell phone of Alvarez being handed and then swallowing some sort of pills immediately following the weigh-in at their first fight. He pulled up a picture of Alvarez on his phone and zoomed in on the Mexican fighter’s abdomen, where he pointed to marks that he said doctors had told him were consistent with steroid use. Then he tried to clarify what he had said—which is maybe more what he had meant to say—and the gist was that the marks, the pills, the positive test, all of that should have been looked into, that Alvarez needed to answer all the allegations, and he wasn’t planning to speak publicly until fight week. “I’m just raising this question about the facts,” Golovkin said.

Since boxing combatants risk their lives in addition to their reputations, it seemed prudent to ask him why he’d fight Alvarez if he believed, if he even doubted, if even part of him felt that Alvarez was not clean. He shrugged, then whispered, “This is part of everything that’s happening in boxing.”

In the weeks that followed, Alvarez tested positive again. He was suspended by the Nevada Athletic Commission, and the rematch was canceled, at least for now. Instead of fighting Alvarez in Las Vegas on Saturday, Golovkin will now face Vanes Martirosyan at the StubHub Center in Los Angeles. Martirosyan is a solid boxer with 36 victories, three losses and one draw, but not necessarily an elite one.

Most fighters, especially elite ones, would have waited. Golovkin did not want to. For this, for the decision to remain active, he again shouldered what seemed like an unfair amount of criticism, for whom he fought and whom he didn’t fight and whom he couldn’t fight. Lost in the clenbuterol mess was that once again GGG was faulted for events he had no control over, and so continued the curious case of Gennady Golovkin’s boxing career.

He’s an unbeaten fighter with 33 knockouts in 37 bouts, and should he win on Saturday, he would tie Bernard Hopkins for the most middleweight title defenses (20) in boxing history, which is the sixth-most of all time in any weight class. That will certainly be enough to cement Golovkin’s place in boxing’s Hall of Fame. And yet his legacy is more complicated than it should be. He’s one of the best fighters in boxing history who also lacks a signature victory, the kind that defines the top careers. “We put too much credence on that,” says his trainer, Abel Sanchez. “We should look less for a career-defining fight and more at just … the career.”

Golovkin draws. He has sold out The Forum in Los Angeles, The 02 Arena in London and Madison Square Garden in New York. He set the attendance record in a previous bout at the StubHub Center in 2014. Golovkin also sells. He’s the only active boxer who’s sponsored by Jordan Brand and Hublot and Chivas Regal whisky. His issues don’t stem from popularity or marketability. No, the problem with Gennady Golovkin isn’t Gennady Golovkin. His issues speak directly to the sport itself.

When he first arrived stateside, Golovkin had to beg HBO for air time, taking frequent fights, sometimes on short notice, for low pay. He fought in Panama City and upstate New York and Monte Carlo. He knocked out everyone his promoter, Tom Loeffler, was able to put in front of him.

The more he won, the more excuses he heard. He could write a book on how to get out of a boxing match. He had the most common rationalization printed on T-shirts: I’ll fight Gennady, just not next. There was always an injury, or bad timing, or even the time that one opponent claimed he couldn’t find a pen to sign the deal. Carl Froch said no. Felix Sturm said no. Sergio Martinez said no. Julio Cesar Chavez Jr. said no. Or their representatives did, anyway. Imagine Golovkin’s résumé with victories over those four fighters. It looks completely different. Meanwhile, the only time Golovkin missed a fight that he had scheduled was when his father died in 2014 and he had to return to Kazakhstan for a 40-day mourning period. He fought when he had the flu and he fought through minor injuries and he even still wanted to fight an opponent who had failed a drug test only two months before their bout.

“I’ve been in boxing for 26 years,” Loeffler says. “We were basically laying the belts on people’s doorstep and nobody wanted to challenge him. The excuse was the risk wasn’t worth the reward. They were all negotiating like this was their fighter’s last fight. They wanted retirement money to face GGG.”

So that, too, became part of Golovkin’s legacy—the fighters who vacated belts or took vacations so they didn’t have to engage him. Promoters declined to name a magic number for Loeffler because they were afraid that he might accept even absurd bids. Even after Golovkin became a world champion, even after he won three belts, his opponents often made comparable money without comparable résumés. That was the only way he could get them into the ring.

All this time that Golovkin was begging for opponents, the most popular boxer in the world was Floyd Mayweather Jr., who became the most bankable athlete in all of sports. Mayweather won so many bouts by decision, taking eight rounds, giving four. When Golovkin beat Danny Jacobs by decision in March of 2017, that was billed as  Mayweather-like brilliance but was instead received as a sign of his advanced age and diminished power. He couldn’t win for winning, except he did win when Alvarez saw the Jacobs result and accepted the Golovkin fight that his camp had been avoiding. Then, the draw. Then, the failed tests. Then, on April 8, Golovkin turned 36.

In all his years in boxing, Loeffler says he has never crammed an entire promotion into two-and-a-half weeks the way that he did for this Martirosyan fight. That it happened at all speaks to both Golovkin’s desire to box more often and his ability to sell tickets on short notice. And yet he faced another round of criticism for not fighting Sergiy Derevyanchenko and for moving the fight to Los Angeles and for everything but not feeding Alvarez himself. That all of the above was out of Golovkin’s control—again—went unsaid.

Back in Big Bear, Sanchez had considered what the whole clenbuterol saga said about the sport he has spent his life engaged in. After all, they were selling a fight in which their boxer was accusing his opponent of being dirty, and they were still somehow O.K. with the fight happening, regardless of the test result. For those involved, it made sense why everyone wanted the bout to take place. It was, like most things, about money. Their first fight registered the third-highest gate in boxing history, banking a full $27 million, and yet it was most remembered for the judge who scored it 118–110 in favor of Alvarez, a card so laughable the judge who scored it deserved to be suspended, if not banned.

What I wondered was why anyone would pay to watch the rematch, after the years of prolonged negotiations, the bad card and the positive test. It was all so very #boxing. Sanchez didn’t necessarily agree with the premise of the question. But he did say that when he had retired a few years back, before Golovkin serendipitously walked into his gym, he had “really been watching a sport intent on destroying itself.”

“It’s important for our sport to realize the fans are the reason we’re doing this,” he said. “They’re not stupid. Look, I love the sport. It’s the purest form of gladiatorship. But people pay good money to see this and we can’t cheat them.”

It was Sanchez who told Golovkin four years ago that he needed to start a testing regimen, because he knocked out so many opponents that regardless of his record, some would automatically assume he was not clean. Golovkin has passed every test since, both in the ring and out. “He’s pissed off because he feels he got wronged,” Sanchez says.

Golovkin has not ruled out another rematch against Alvarez, despite everything that went down in recent months. A $27 million gate will do that to a fighter. This time, Loeffler says, they may require four months of testing before the bout, rather than the two months of tests required for the first one or the three months the camps agreed to for the aborted rematch.

What that says is that Golovkin will continue fighting, even as other boxers dodge him or inject themselves with drugs to have a better chance to win. He remains a boxer’s boxer, the choice of aficionados, if not opponents. Someone sent Loeffler a Tweet the other day about how he had made lemonade out of clenbuterol, and Team GGG said all the right things about how he had to beat Martirosyan and focus on what was in front of him, or, as Sanchez says, “there could be a Rocky situation.”

Here’s the thing, though: Boxing fans should do the same. It’s time to focus on Golovkin and the career he has had, rather than who he didn’t or couldn’t fight. He should be remembered as one of the best boxers of his era, a fighter who knocked out so many so easily he made destruction appear routine. That’s Golovkin’s legacy. The best thing anyone can do now is to appreciate it.