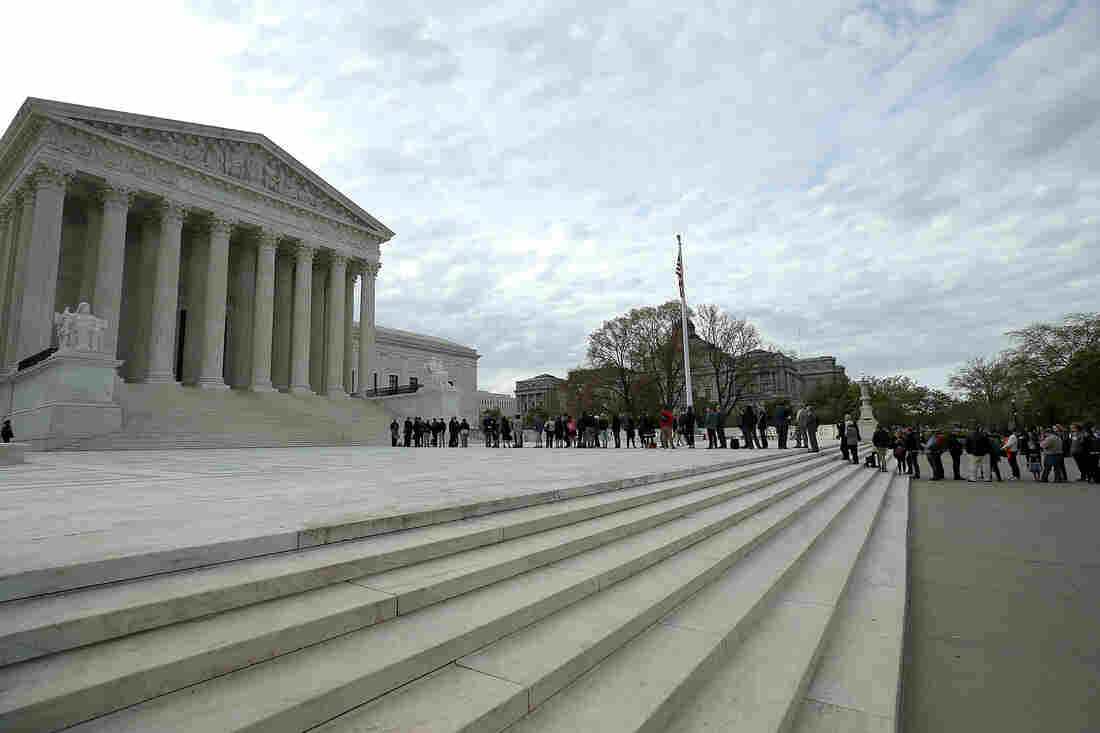 People wait in line to enter the U.S. Supreme Court, on April 23, 2018. There’s less than a month left in the Court’s term and many of the most controversial and contentious cases will be decided in the coming weeks. Mark Wilson/Getty Images hide caption 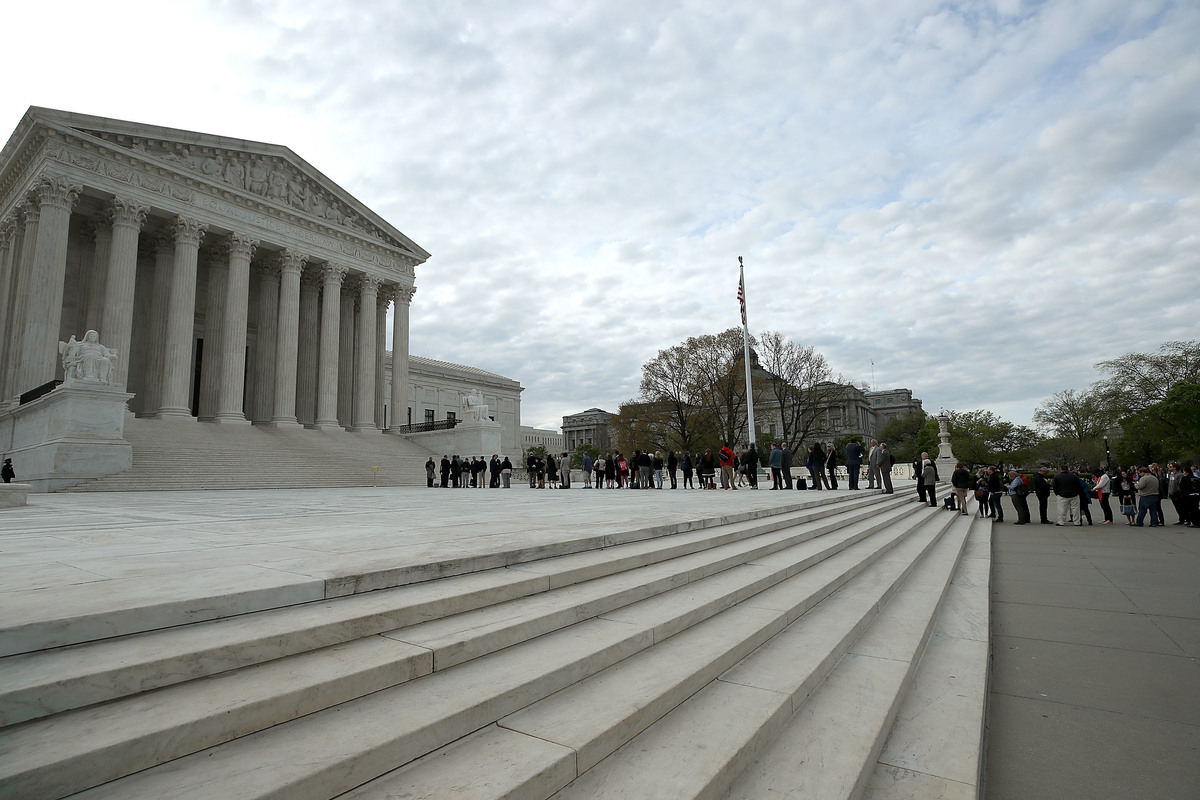 People wait in line to enter the U.S. Supreme Court, on April 23, 2018. There’s less than a month left in the Court’s term and many of the most controversial and contentious cases will be decided in the coming weeks.

On Monday at 10 a.m., the Supreme Court might release opinions in a number of significant cases on this year’s docket, deciding the fate of President Trump’s travel ban, public sector unions and political redistricting — among other possibilities.

The Court never says in advance which opinions it’s releasing, and it has until the end of June to either release opinions or decide to postpone the decisions. So there’s no way of knowing what, exactly, might get dropped on any given opinion day.

But there are a number of closely watched and highly anticipated cases still pending. Here are a few of the big ones to watch:

This is the famous “Cake Case” — a battle over whether a bakery in Colorado can refuse to bake a wedding cake for a same-sex couple, with swirling tensions over free speech, freedom of religion and freedom from discrimination.

The case stems from the state’s anti-discrimination law, which prohibits companies from discriminating against customers based on their sexual orientation. (Worth noting: There is no federal law banning discrimination against gay people, and state laws vary, meaning that many bakeries could turn away gay couples without consequence.)

The bakery owner argues that this is a First Amendment case: Colorado is attempting to force him to bake a cake that sends a message — support for gay marriage — that he does not believe in.

The state argues that this isn’t about free speech, but instead is about a refusal to serve a certain class of people. So, is a wedding cake a statement, or a service? The answer “could have huge implications for all retailers and service providers,” as NPR’s Nina Totenberg has written.

Totenberg reports that all eyes were are Justice Anthony Kennedy during oral arguments, because he’s likely to be the deciding vote — and he’s a noted supporter of both gay rights and free speech, which are in tension in this case.

His executive order led to immediate chaos at airports — and kicked off a long, complicated legal battle.

The travel ban has been revised several times, and several lower courts have found those various versions illegal or unconstitutional. Still, the latest version went into effect in December.

It was always destined for Supreme Court review.

The state of Hawaii says that Trump’s executive order exceeds his actual powers, illegally discriminates based on nationality, and violates religious freedom laws by specifically targeting Muslims — an argument based in part on Trump’s statements about a “Muslim ban.”

The administration says the president has broad powers over immigration policy and that the revised ban is appropriate and legal — and that it is based on issues of national security, not religion.

Many critics have challenged the national security justifications for the ban as specious at best. But the administration says it’s not the judicial branch’s job to question the president’s judgment on national security issues — an argument that several justices on the court seem to find compelling.

Can public sector unions charge non-members fees to cover the costs of negotiations on their behalf?

In 1977, the Supreme Court decided the answer was yes; the question is whether the 2018 court still stands behind that decision.

And it’s a big question.

“Because states generally require unions to bargain for and represent all workers, regardless of their membership in a union, this case is something of a dagger pointed at labor’s heart,” NPR’s Nina Totenberg writes. If the previous ruling is overturned, it would be a serious blow — potentially a devastating blow — for public sector unions across the country.

Unions argue that non-members benefit financial from negotiated raises, for instance, and it’s fair to require them to chip in. They agree that they cannot charge non-members for political activities, just for negotiations that benefit them.

But conservative critics of the policy say that everything a public-sector union does is political — for instance, a wage increase is funded by taxpayers, hence a negotiated raise for workers constitutes a policy change, hence it’s political.

Justice Neil Gorsuch “is likely to be the deciding vote, given that the other justices split 4 to 4 in a similar case in 2016,” Totenberg reports. “That case was decided just after the death of Justice Antonin Scalia, and the balance didn’t seem to change” at oral arguments in February.

Decisions in these gerrymandering cases could literally reshape American politics.

Gerrymandering is the practice of drawing electoral maps to give one party an advantage over another. (If you want to know how it works, The Washington Post has a 3-minute explainer.) It’s not a new practice — the word was coined more than two centuries ago — but modern technology allows for ever more sophisticated slicing and dicing of the voting population.

At its most extreme, gerrymandering means elections are effectively decided based on who drew the maps, rather than how voters vote. But as Jeffrey Toobin, a legal writer for The New Yorker, has noted, that’s a problem that’s “easier to identify than to rectify.”

But the Supreme Court might be ready to drop some possible solutions.

Gill v. Whitford centers on redistricting in Wisconsin, where Republican-drawn maps delivered a resounding victory to Republicans in terms of districts won — despite winning less than 50 percent of the votes across the state.

Benisek v. Lamone is about redistricting in Maryland, where Democrats redrew the map to flip a district in favor of the Democratic party.

The two cases make different legal arguments, Totenberg notes, but hearing both might also allow the court to strike down redistricting without seeming to take the side of either party. (This issue is playing out across the country, and the court is also considering a complicated case about gerrymandering in Texas — you can read more about it at SCOTUS blog.)

Overall, though, if the court decides to limit gerrymandering, then Republicans would lose out in the short term, she says:

If you want to read an unconventional defense of the status quo, the solicitor general of Utah has written a short play imagining the headache it would cause if the Supreme Court tries to require fairer redistricting maps.

In Ohio, if you’re registered to vote and you don’t show up on Election Day, you can get purged from the voter rolls.

Ohio emphasizes that it sends mail to voters’ houses if they don’t vote in multiple elections, giving them the chance to confirm their voting status and remain registered.

But some frustrated Ohio residents say they never saw the notices, and that unregistered mail is not the only — or best — way to confirm a person’s address.

As Totenberg reports, an argument on the steps of the court got to the heart of the disagreement. Ohio’s secretary of state, Jon Husted, said Ohio was making it “easy to vote and hard to cheat.”

An Ohio mayor and military veteran said he was on active duty when he was purged from the voting rolls for not voting and not sending back the mailing. “I came back home after defending that right [to vote], and could not exercise it because of this archaic, terrible policy,” he said.

Now the Supreme Court will weigh in.

Another voting case focuses on the politics-free “buffer zone” around polling places.

Totenberg notes that the Supreme Court has long upheld laws creating a campaign-free zone around polling places. This case is about what happens inside polling places.

Specifically, can Minnesota require voters to hide or remove all political badges, buttons or shirts when they go to vote? Or is that violating voters’ right to free speech?

At oral arguments, “the court did not indicate which way it was leaning,” Totenberg reports.

The court is poised to decide whether police officers need a warrant to seize cell phone records, including location data.

The eponymous Carpenter, Timothy Carpenter, was a cell phone thief who was busted by cell phone location data — which the government got from a wireless provider without a search warrant.

The question is whether that violated the Fourth Amendment, which protects against “unreasonable searches and seizures.”

Changing technology complicates the question, as Totenberg notes. Cell phone location data was originally hit-or-miss (Serial fans might recall the difficulties of pinpointing location based on cell towers) but they have grown more precise over time. Meanwhile encryption is making some kinds of digital data inaccessible to law enforcement even with a warrant.

At oral arguments, “a majority of the justices across ideological lines indicated they may be willing to impose new limits” on the government’s access to that data, Totenberg writes.

This is Fane Lozman’s second case before the Supreme Court. His first asked whether his floating home was a boat or a house. (A house, the court said.)

This one asks whether the City of Riviera Beach in Florida had the right to put Lozman in jail after he called local politicians corrupt. He was charged with disorderly conduct, but the charges were later dropped

“The city argues that in the context of law enforcement, an open-ended right to sue for false arrest would be chaotic, expensive for municipalities and dangerous,” Totenberg reported in Februrary.

Lozman says if he’s not allowed to challenge the arrest, it would suggest that government officials could use a minor crime — like jaywalking — as a pretense for arresting people based on the content of their protected speech.

Totenberg notes that media organizations have filed a brief in the case, pointing out that journalists have been arrested for critical coverage of the government.