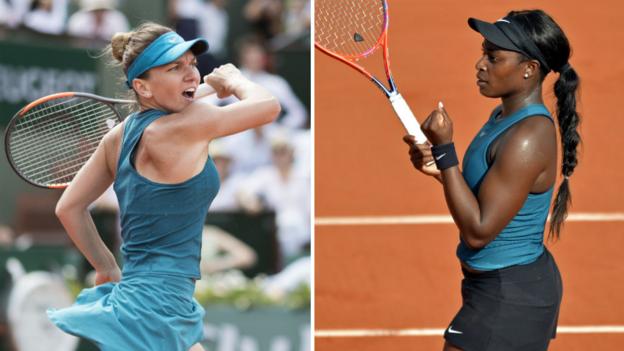 World number one Simona Halep says she will “stay chilled” in Saturday’s French Open final as she attempts to vanquish memories of defeat in her previous three Grand Slam finals.

The Romanian, who was runner-up in Paris in 2014 and 2017 and at the Australian Open in January, will play American Sloane Stephens.

“It’s a big chance but you never know, so I will stay chilled.”

She admitted afterwards that she felt sick with nerves, adding “maybe I wasn’t ready to win it, but maybe next time”.

“I will be I think more confident because I have a lot of experience,” she said after booking her place in this year’s final with a 6-1 6-4 win over world number three Garbine Muguruza.

She is certainly more used to playing on clay.

In addition to her two runs to the final in Paris, she won the junior title in 2008 and has won seven clay-court titles on the women’s tour.

Stephens by contrast has only one title on the surface and has advanced beyond the fourth round for the first time.

The 25-year-old, however, does have experience of winning a Grand Slam.

She beat her compatriot Madison Keys to claim the US Open title in 2017 and has raised her game on the big stage once again.

She looked composed in beating Keys in straight sets in the semi-final in Paris and has a straightforward mindset for Saturday’s showdown with Halep.

“It’s just mainly about competing. No-one is going to hand you the match,” she said.

Find out how to get into tennis in our special guide.

“It’s a Grand Slam final. You have to go out there and get after it and make sure you play every point and try to execute your game plan as best as possible.”

Just like last year, Simona Halep goes into the French Open final as the favourite to win her first Grand Slam title.

She played magnificently and powerfully to see off the challenge of Garbine Muguruza in the semi-finals, and is a natural on clay.

But favouritism, and her status as the world number one, invites its own pressure – especially as she has come off second best in her first three Grand Slam finals.

She does, however, seem more relaxed about the challenge, having reconciled herself to the fact there are worse things in life than never winning a Grand Slam.

Sloane Stephens may be the underdog, but she is more than capable of denying Halep once more.

She has a very consistent record at Roland Garros and moves exceptionally well on all surfaces. And the American has proved she is the woman for the big occasion.

Stephens has been in six finals, including at last year’s US Open, and won them all.