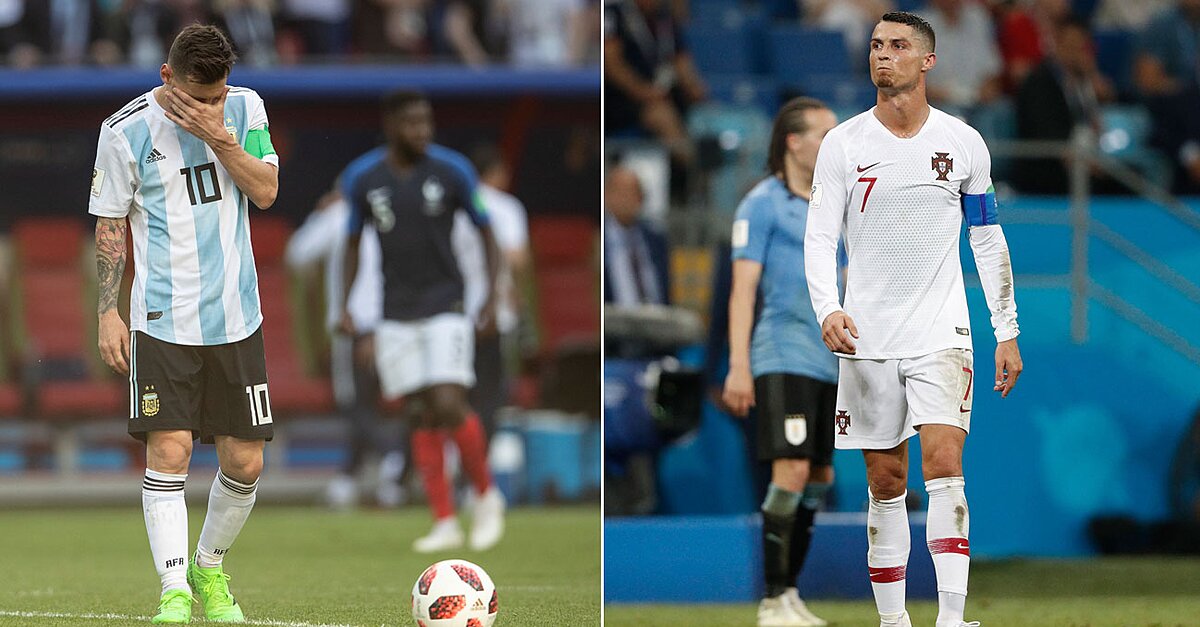 MOSCOW — The two biggest stars in men’s world soccer, Lionel Messi and Cristiano Ronaldo, both went out of the World Cup on Saturday, with Messi’s Argentina falling 4-3 to France and Ronaldo’s Portugal losing 2-1 to Uruguay in two compelling World Cup round of 16 games.

The results set up a quarterfinal bout between France and Uruguay slated for Friday, while Argentina and Portugal are left to mull what could have been for them and their superstars.

If the excitement and energy of Saturday’s two games continues in the days ahead, well, we’re in for a treat.

Here are my three thoughts on the two results:

Argentina and Messi are out of the World Cup after a 4-3 loss to France that wasn’t as close as the score indicated, and we’re left once again wondering why a nation that produces so many talented club players has invariably been less than the sum of its parts as a national team.

Will Messi, now 31, play in another World Cup? It’s possible, but doubtful. He didn’t announce his international retirement, as he had done (and later rescinded) after the 2016 Copa América Centenario final, but Messi has long been frustrated by the chaos at the Argentine federation and has clearly suffered from the pressure of trying in vain to win a World Cup in a career that has been remarkably successful for him at the club level with Barcleona. Personally, I think Messi won’t play in another World Cup.

When you look at Messi’s World Cup legacy, he was mostly undone by others in three of his four tournaments. In 2006, Argentina coach José Pékerman failed to bring Messi on at all in a quarterfinal loss to Germany. In 2010, the federation made the horrible mistake of hiring Diego Maradona as Messi’s national team coach, and an exit before the final was inevitable.

History will view the 2014 World Cup, in which Argentina reached the final, as Messi’s best chance to win the trophy, and coach Alejandro Sabella deserves a ton of credit for overseeing a team that was more balanced—on and off the field—than any of Messi’s other World Cup teams. Messi himself missed a golden chance against Germany in the 2014 final, and the German would go on to win in extra time.

None of this is to say that Messi does not deserve some of the blame for Argentina’s World Cup failures. This year, in particular, he tried to control things too much, from the personnel on the field to the decisions that usually come from a coach and a federation. All that said, I still would argue that Messi is the greatest player of all time, even though he hasn’t won a World Cup. The best measure of a player’s legacy in the 21st century is the UEFA Champions League, which provides a bigger sample size than the World Cup and has all the best players in the world (unlike in the days when Pelé and Maradona played).

But will Messi forever regret not winning a World Cup? You’d better believe he will.

• Teams are more important than stars

It seems like a basic point to make, but we hear all the time about “Messi vs. Pogba” and “Ronaldo vs Suárez” when the games today were Argentina vs. France and Portugal vs. Uruguay. And in both games the better team won against the team that was unbalanced with a superstar. Uruguay is good enough to win the World Cup, and much of that is due to Diego Godín, who has an argument for being the player of the tournament.

Uruguay beat Portugal 2-1 and showed an admirable balance all over the field, including in the midfield and up top with the electrifying Luis Suárez and Edinson Cavani. They played one of the best (and perhaps longest) give-and-gos I’ve ever seen on Uruguay’s first goal, and Cavani had a terrific finish on his second, the game-winner. European champion Portugal is out, not least because it failed to find other players who could take some of the load off Ronaldo. By the way, I think Ronaldo has a better chance of playing in another World Cup than Messi does, even though Ronaldo (33) is two years older. Portugal’s federation is less chaotic, and Ronaldo figures to continue to be in supreme physical condition for several more years.

• France has the highest ceiling of any team in Russia

If every team is playing at its best, France is the best team at World Cup 2018. We finally saw that on Saturday, at least on the attacking end, as Kylian Mbappé ate Argentina’s back line for lunch and fully announced himself on the international scene in France’s win.

Yes, it will be concerning for France that it conceded three goals and even went behind 2-1 for a bit in the second half, but Pogba and Mbappé were terrific and created danger all over the field. Also give some dap to Benjamin Pavard, France’s 22-year-old right back, who scored perhaps the goal of the tournament from distance—his first for the national team—to help preserve the victory.