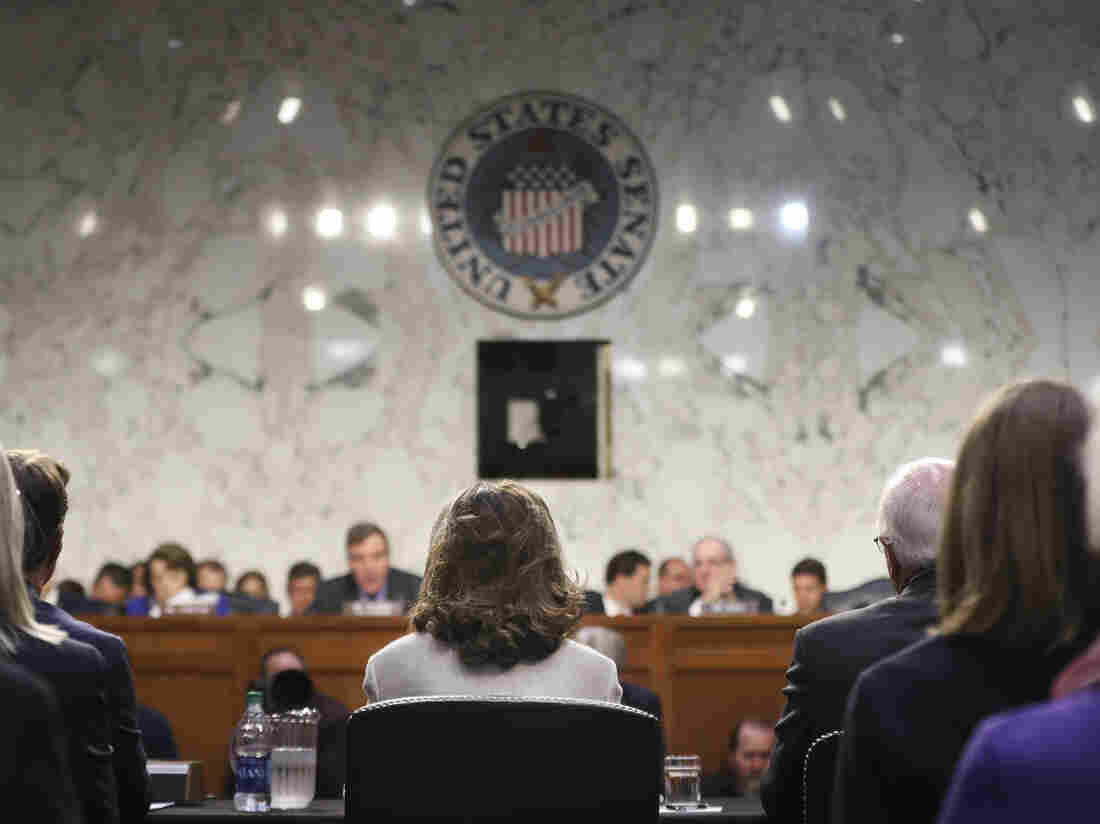 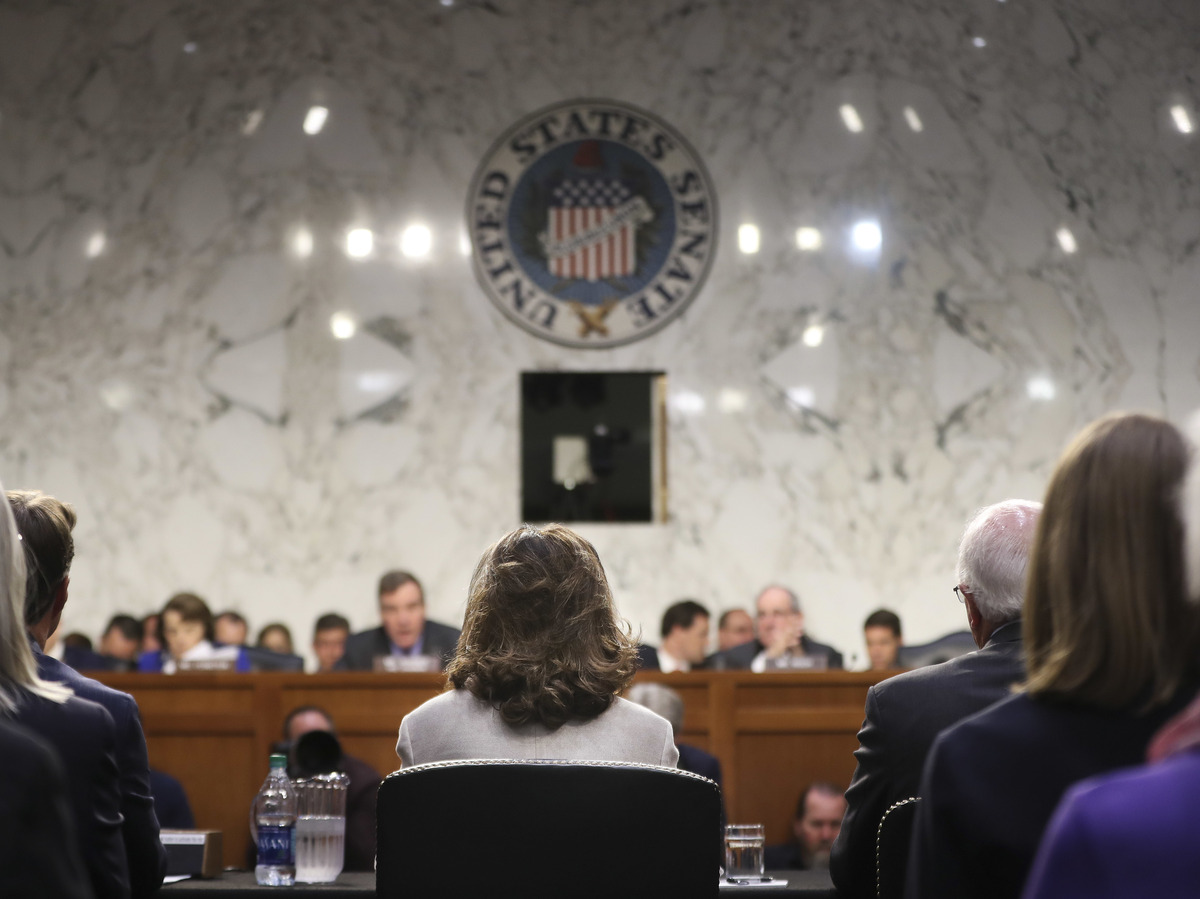 In a May 2018 file photo showing the Senate Intelligence Committee, CIA nominee Gina Haspel, center seated, testifies during a confirmation hearing in Washington.

James A. Wolfe, a former top aide to the Senate Intelligence Committee, has been arrested and charged with multiple counts of lying to the FBI about contacts with multiple reporters as part of the Justice Department’s stepped up investigation of high-level leaks.

Wolfe was the director of security for the Senate committee for about 29 years, working for both Republicans and Democrats. He was responsible for receiving, maintaining and managing classified material that passed between the White House and Senate lawmakers.

The Associated Press notes, “Though Wolfe is not charged with disclosing classified information, prosecutors say he was in regular contact with multiple journalists who covered the committee, including meeting them at restaurants, in bars, private residences and in a Senate office building.”

Investigators say Wolfe lied by repeatedly denying contacts with the reporters. Although the reporters are not named in the indictment, The New York Times says that Ali Watkins, who works for the newspaper, was one of them. Wolfe reportedly first denied and then acknowledged a years-long romantic relationship with Watkins, who worked at Buzzfeed News and Politico prior to the Times.

According to the Times, “It appeared that the F.B.I. was investigating how Ms. Watkins learned that Russian spies in 2013 had tried to recruit Carter Page, a former Trump foreign policy adviser. She published an article for BuzzFeed News on April 3, 2017, about the attempted recruitment of Mr. Page in which he confirmed the contacts.”

The newspaper reports, “Shortly before she began working at The Times, Ms. Watkins was approached by the F.B.I. agents, who asserted that Mr. Wolfe had helped her with articles while they were dating. She did not answer their questions. Mr. Wolfe was not a source of classified information for Ms. Watkins during their relationship, she said. That same month, F.B.I. agents asked Mr. Wolfe about an article written by Ms. Watkins. He denied knowing the reporter’s sources.”

“During the same interview with the F.B.I., Mr. Wolfe denied knowing Ms. Watkins. But confronted with pictures of the two together, he admitted being in a ‘personal relationship’ with her since 2014,” according to the Times.

As part of the probe, the Justice Department took the unusual step of seizing Watkins’ phone and email records.

Senate Intelligence Committee Chairman Richard Burr, R-N.C., and Vice Chair Mark Warner, D-Va., issued a joint statement saying they “have fully cooperated” with the FBI and the Department of Justice and that the committee “has made certain official records available to the Justice Department,” according to The Hill.

The statement said the committee “takes this matter extremely seriously” but that it would “in no way interfere” with the panel’s ongoing investigation of Russian election interference and possible links to the Trump campaign.

Wolfe, who is from Ellicott City, Md., was expected to appear in court on Friday, prosecutors said, but the AP says it was not immediately clear if he has retained a lawyer. He faces five years on each count of lying to the FBI, but if convicted, is reportedly likely to serve only a small portion of that time.

According to the grand jury indictment of Wolfe, in an interview with FBI agents on Dec. 15 last year, prosecutors allege that he filled out a questionnaire in which he checked “no” when asked about contacts with the reporters. He further indicated that he had not had a personal relationship with any of the journalists.

Despite his denial, the indictment alleges, Wolfe “had, in truth, engaged in extensive contact with multiple reporters,” adding that he was “conveying to at least two reporters information about” a person referred to in the documents only as “MALE-1.” According to the April 2017 Buzzfeed article by Watkins, in a previous indictment dating from January 2015 of Russian intelligence operative Victor Podobnyy, MALE-1 was a reference to Page.

The indictment says that around December 2017 but before he was interviewed by the FBI, Wolfe sent a text message to “REPORTER #2,” presumed to be Watkins. In it, he said he had “always tried to give you as much information that I could and to do the right thing with it so you could get that scoop before anyone else. … “

“I felt like I was part of your excitement and was always very supportive of your career and the tenacity that you exhibited to chase down a good story,” Wolfe wrote, according to prosecutors.

“Whether it was really necessary here will depend on the nature of the investigation and the scope of any charges,” he said, according to the AP.

Buzzfeed Editor in Chief Ben Smith said on Twitter that the online publication is “deeply troubled by what looks like a case of law enforcement interfering with a reporter’s constitutional right to gather information about her own government.”

“Any time that a journalist’s ability to do their job is threatened in a manner such as this, it’s a major concern,” Politico spokesman Brad Dayspring said, according to the organization.

The prosecution follows intense pressure from President Trump for the Justice Department to crack down on leaks to the media. In August, Attorney General Jeff Sessions said that in 2017, the number of such investigations had tripled as compared to the already high number opened by the Obama administration. Sessions said that authorities were prepared to stop “the culture of leaking.”

“Mr. Wolfe’s alleged conduct is a betrayal of the extraordinary public trust that had been placed in him,” said U.S. Attorney for the District of Columbia Jessie Liu in a statement. “It is hoped that these charges will be a warning to those who might lie to law enforcement to the detriment of the United States.”

In the same statement Thursday, Assistant Attorney General for National Security John Demers said, “The Attorney General has stated that investigations and prosecutions of unauthorized disclosure of controlled information are a priority of the Department of Justice. The allegations in this indictment are doubly troubling as the false statements concern the unauthorized disclosure of sensitive and confidential information.”