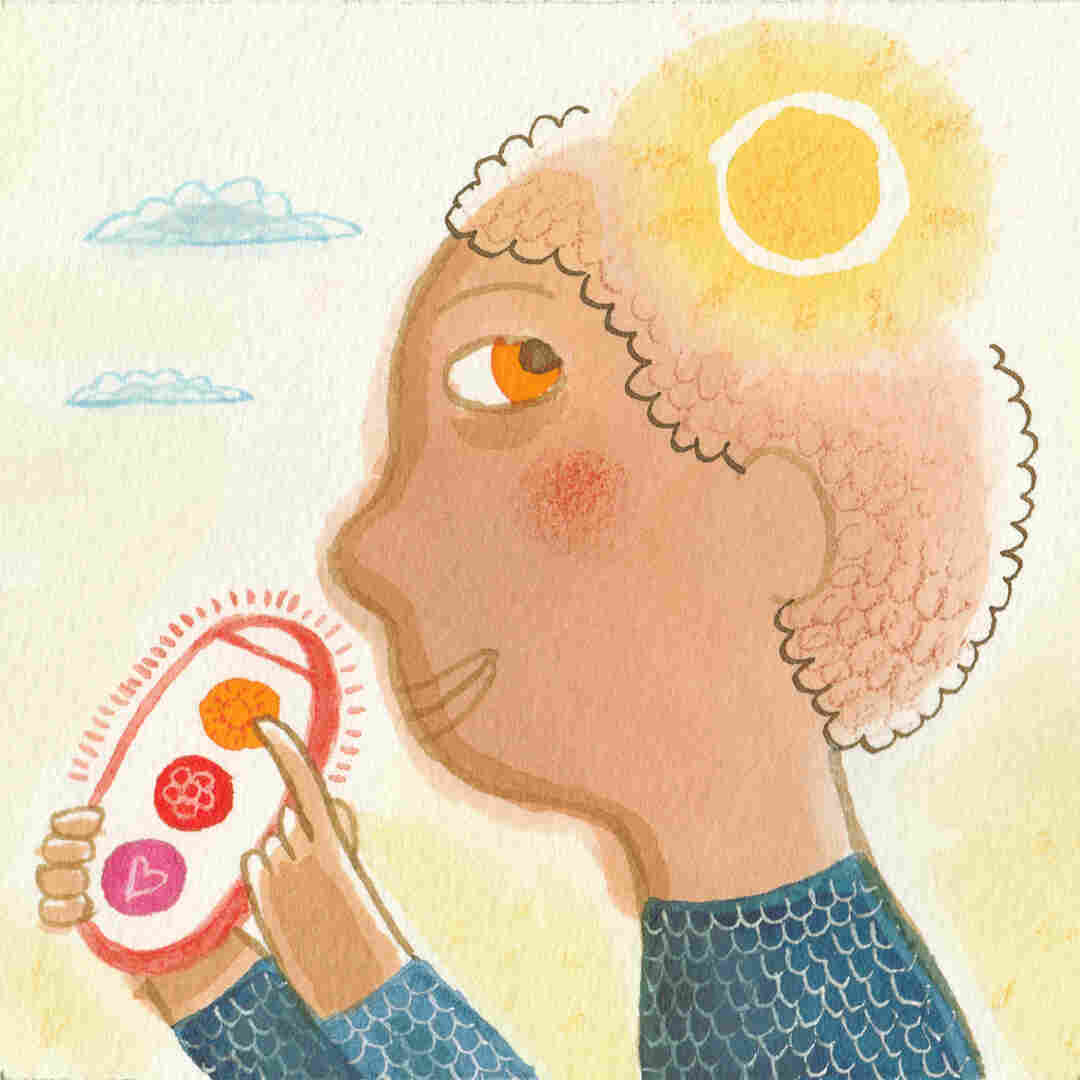 The Resilience Builder Program teaches young students techniques for handling tough emotions, like visualizing a remote control for thoughts so they can switch from negative to happier feelings. Nathalie Dieterle/for NPR hide caption

Sometimes 11-year-old B. comes home from school in tears. Maybe she was taunted about her weight that day, called “ugly.” Or her so-called friends blocked her on their phones. Some nights she is too anxious to sleep alone and climbs into her mother’s bed. It’s just the two of them at home, ever since her father was deported back to West Africa when she was a toddler.

B.’s mood has improved lately, though, thanks to a new set of skills she is learning at school. (We’re using only first initials to protect students’ privacy.) Cresthaven Elementary School in Silver Spring, Md., is one of growing number of schools offering kids training in how to manage emotions, handle stress and improve interpersonal relationships.

Does raising kids have to be stressful? Is it really dangerous for babies to sleep with Mom? Do chores have to be a fight? Over the next month, NPR travels around the world for ideas to make parenting easier. Sign up for NPR Health’s newsletter to get the stories delivered to your inbox.

At Cresthaven, some fifth-graders like B. get an intensive 12 weeks of such training, a course called the Resilience Builder Program. Created by psychologist Mary Alvord, it’s a form of group therapy designed to help students who are struggling with trauma or cognitive disorders — or everyday anxiety caused by things like bullying or moving schools..

“I think it’s so critical that kids know they have the power to make changes. While we can’t control everything about our lives, we can control many facets,” Alvord says.

If students can learn this kind of resilience, the ability to adapt to emotional challenges, she says, “I think the whole world gets better.”

The idea of teaching social and emotional skills in school is more than 20 years old. Research has shown this kind of intervention is effective and has a lasting impact. One analysis published last year in the journal Child Development reviewed dozens of programs with similar approaches. Participants were 11 percent more likely to graduate from college and less likely to have mental health problems or be arrested than were students who never went through these programs.

In Australia, Canada and the U.K., social and emotional learning in schools is already being implemented on a large scale. Here in the U.S. it has spread, but not as quickly as some would hope. With all the mandates that schools have to keep up with, social emotional learning gets moved to the back burner.

But at Cresthaven, the school counselor, Marina Sklias, and the school principal were hungry for it.

Sklias says getting help for students dealing with trauma and emotional problems has been tough. In a high-poverty school such as Cresthaven, with a lot of immigrant families, she says there is only so much she can do.

“Oftentimes I refer students for counseling and parents request counseling, but due to financial situations or transportation issues, parents can’t always follow through,” she says. At school, she is already stretched thin meeting with students or giving classroom presentations.

When Alvord offered to bring the Resilience Builder Program to Cresthaven pro bono as part of a research project, Sklias selected a group of students she thought could benefit from it. It has been used especially with students dealing with attention deficit hyperactivity disorder or anxiety or trauma — officially, students with “social competence deficits.” She met with parents, and many agreed to sign up their kids.

The program focuses on fifth-graders, Alvord explains, to prepare them for middle school, where pressures like dealing with sex or substance use really kick in. It’s a time that can be especially hard for kids already struggling with social and emotional issues.

For 12 weeks, small groups of Cresthaven students learned about topics like leadership skills, stress management, problem-solving, and empathy. The emotional-problem solving techniques they learned were based in cognitive behavioral therapy — adapted for kids.

They also drew on the whiteboard together, did role-playing and yoga, had snack time, and played lots of charades.

Some of the time they worked on simple social skills, like making eye contact during conversation, greeting people in the morning, respecting personal space.

The kids also learned handy techniques for working with negative thoughts, like visualizing a special kind of remote control. Alvord shows a drawing with buttons that say things like “happy place” and “things thankful for.”

“You can switch channels in your head,” she explains. “Instead of ‘that math test was really hard,’ if we think, ‘I got through it and I’m proud myself.’ “

Alvord developed the Resilience Builder Program in her private practice decades ago, and now she is working with researchers including Dr. Brendan Rich at Catholic University to measure how well the program works in schools with underserved students. Early pilot studies on the program show it is effective.

The new research compares students who have done the program with those who haven’t. Researchers have collected data from 119 kids at four schools in the Washington, D.C., area, including those at Cresthaven. They just had a paper accepted by the International Journal of Group Psychotherapy, which found that students who went through the program reported better emotional control than students who hadn’t. They plan to publish more in the coming months, and Alvord is excited by some early results that show the program is helping kids academically.

“It all goes together,” she says. “If you’re not struggling with relationships or teasing and bullying, you have more head space to give to study, and you’re also just more positive.”

After each Resilience Builder Program wraps up, Alvord organizes a showcase for the students and their parents. The kids get to share what they’ve learned and get certificates of achievement, and their parents cheer them on.

On a warm spring evening, the handful of Cresthaven fifth-graders who had just finished the program gathered in the school library for their showcase.

Most of the families are immigrants from all over the globe, East Africa, Latin America. Alvord is first generation herself and grew up speaking Russian and Armenian. She tells these families that they already know about how important and hard it can be to adapt.

“You have had to make many changes and learn languages and customs — that’s resilience,” she says. There are nods of agreement in the room.

The students take turns coming up to the front to get their certificates and share their favorite takeaways.

When it’s her turn, B. — the 11-year-old who was being bullied — says that she learned how to solve “friendship problems.”

“It helped me not get as mad at my friends as I used to,” she says.

B.’s mother is thrilled with the changes she has seen in her daughter. Her eyes well up as she talks about how proud she is. B. seems less nervous; she doesn’t come home in tears as often.

B. is pleased, too. She especially likes the relaxation skills they learned — things like breathing in and then slowly out again, and clenching fists and then letting go. She can take her new set of problem-solving tools with her to middle school next year and beyond.

Parents make mistakes. It comes with the job. What do you wish you had known about raising kids before becoming a parent?