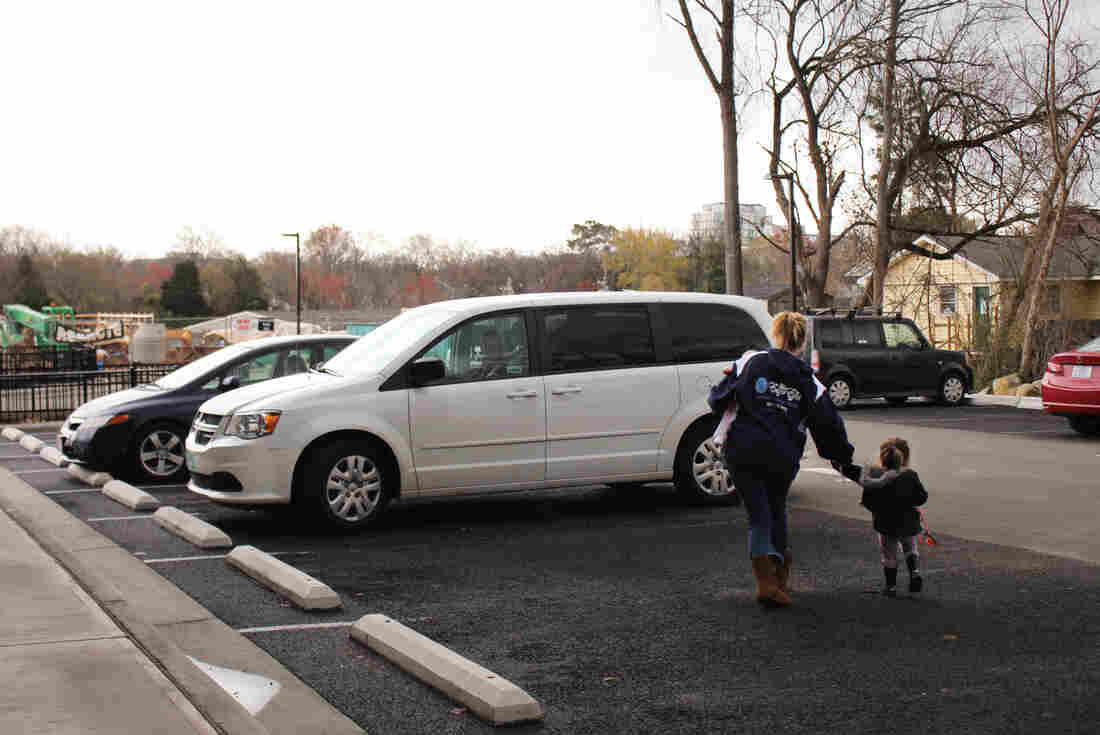 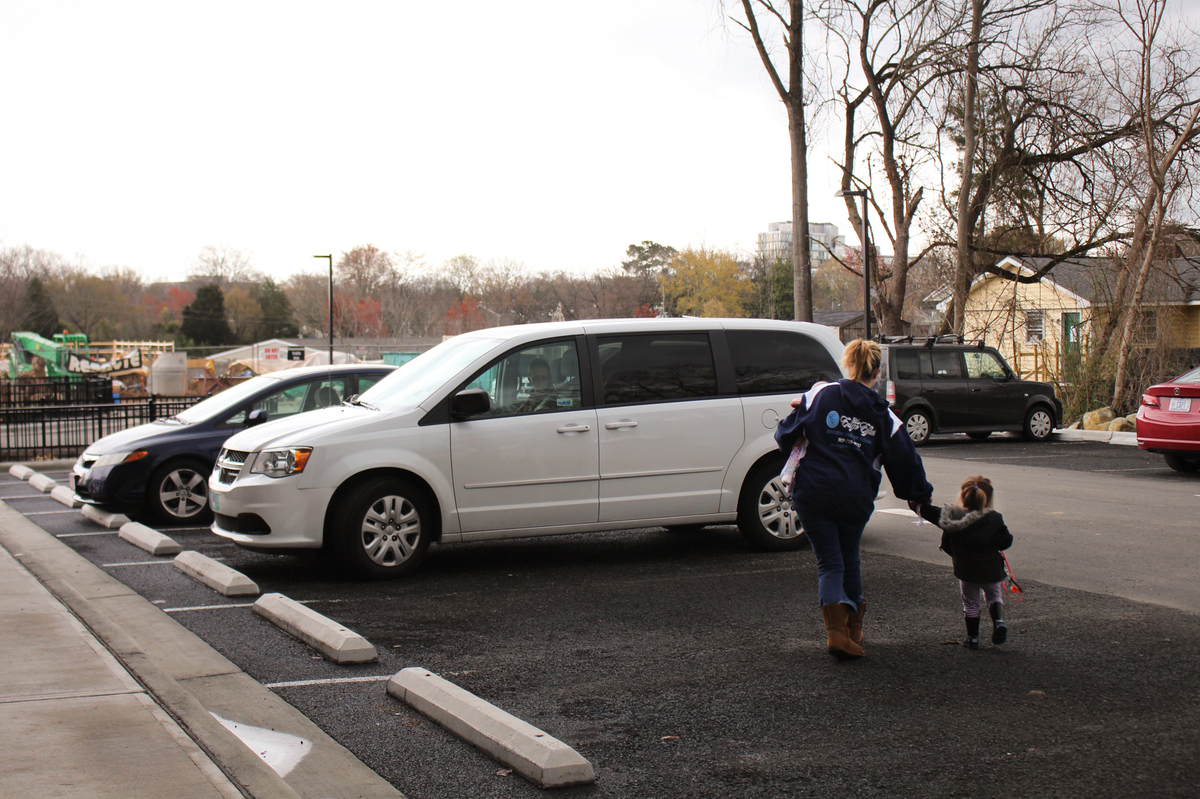 Amanda Williammee pauses at the window of the toddler classroom at Horizons day care in Carrboro, N.C., to quietly check on her 2-year-old daughter Taycee.

“I like to peek in on her and see what she’s doing before she sees me,” Williammee says. “I love watching her — it’s too funny.”

There’s a dance party in progress. Soon, Taycee spots her mom, screams and comes running to the door.

“Did you dance?” Williammee asks, leaning down to her daughter.

It seems to be a pretty typical preschool pickup, but it’s not. Tied to the University of North Carolina Medical Center, Horizons is a residential substance use disorder treatment program where mothers undergoing treatment can bring their children. The kids attend school or day care while mothers take classes and go to therapy sessions.

Williammee, now 25, has struggled with addiction since she was a 19-year-old college student. She injected opioids during both her pregnancies and both of her babies were born with neonatal abstinence syndrome — a condition that includes drug withdrawal symptoms like tremors, irritability, sleep problems and high-pitched crying. Williammee remembers that withdrawals were harder for Taycee than they’ve been for 6-month-old Jayde.

“It wasn’t just like we had this two-week period at the hospital of her being sick. It went on for months because she did not sleep,” Williammee remembers. In those days Taycee only slept for 20-minute stretches and needed constant swaddling.

On average, a baby is born in withdrawal from opioids every 15 minutes in the U.S., according to recent research. That staggering statistic raises concerns among doctors and social workers — and among mothers like Williammee.

Today, both Taycee and Jayde are developing normally. Still, Williammee wonders about the risk of lasting effects on each child’s body and brain.

Research is just beginning to point toward the answers. Recently, an international, multisite study tracked for 36 months nearly a hundred children whose mothers had been in medically-assisted treatment during their pregnancy. Hendrée Jones is executive director at Horizons and co-authored the study. She says the early results suggest there are reasons to be optimistic.

“The children through time tended to score within the normal range of the tests that we had,” Jones says.

Dr. Stephanie Merhar, a neonatologist at Cincinnati Children’s Hospital, released a separate study after growing increasingly worried the past few years as she treated children coming in for checkups. Her team reviewed the charts of 87 2-year-olds who had been diagnosed with neonatal abstinence syndrome at birth. Each child had been given a standard test for 2-year-olds that evaluated cognitive, language and motor skills — the same assessment used in Jones’ study.

Merhar says what her team found was a call to action.

“Most of these children do well, and they do within the normal range,” she says. There is still a risk these kids may experience some delays as they continue to grow, she adds, so they should be monitored closely.

The problems Merhar found among children exposed to opioids in utero include about 8 percent who need treatment for strabismus, or lazy eye, by age 3. A number of the children also scored at least one standard deviation below the mean in terms of cognitive, language and motor skills.

The underlying reason for those delays is unclear, she says, and the long-term outlook for the children is still unknown.

Still, exposure to opioids in utero does not appear to be as damaging as some other addictive substances.

Dr. Jonathan Davis, who chaired a Neonatal Advisory Committee for the U.S. Food and Drug Administration, is calling for more longitudinal research.

Davis, who is also chief of newborn medicine at Floating Hospital for Children at Tufts Medical Center, has passionately advocated for a national registry for babies exposed to drugs while in the womb.

In the 1980s and early 90s, fears for children born into that era’s crack cocaine epidemic turned out to be largely unfounded, according to the National Institutes of Health.

Dr. Lauren Jansson, director of pediatrics center for addiction and pregnancy at Johns Hopkins Medicine, has treated mothers and babies since the early 1990s. When asked about how these opioid-affected babies are likely to develop, she says “the one solid thing we can say about children who are exposed to substances prenatally is that their mothers need treatment.”

Horizons opened its program in 1993 because of the cocaine epidemic. Since then, Jones says, it has become clear that the lives of people with substance use disorders — whether it be cocaine or opioids — can be very chaotic, and that chaos might be as damaging to their children as the direct effects of the drugs.

Treat the parents, and kids benefit, too.

Most of the mothers at Horizons took multiple substances when pregnant and also experienced trauma, abuse or neglect in their own childhoods. And that can be hard to overcome, Jones says

“There’s often times an unrealistic expectation by society, she says. “They’re supposed to automatically know how ‘be good mothers’ — how to be nurturing mothers. That’s like trying to teach somebody algebra when they’ve never even had addition.”

In an interview inside her homey, staff-monitored apartment, Willammee describes why this time will be different. 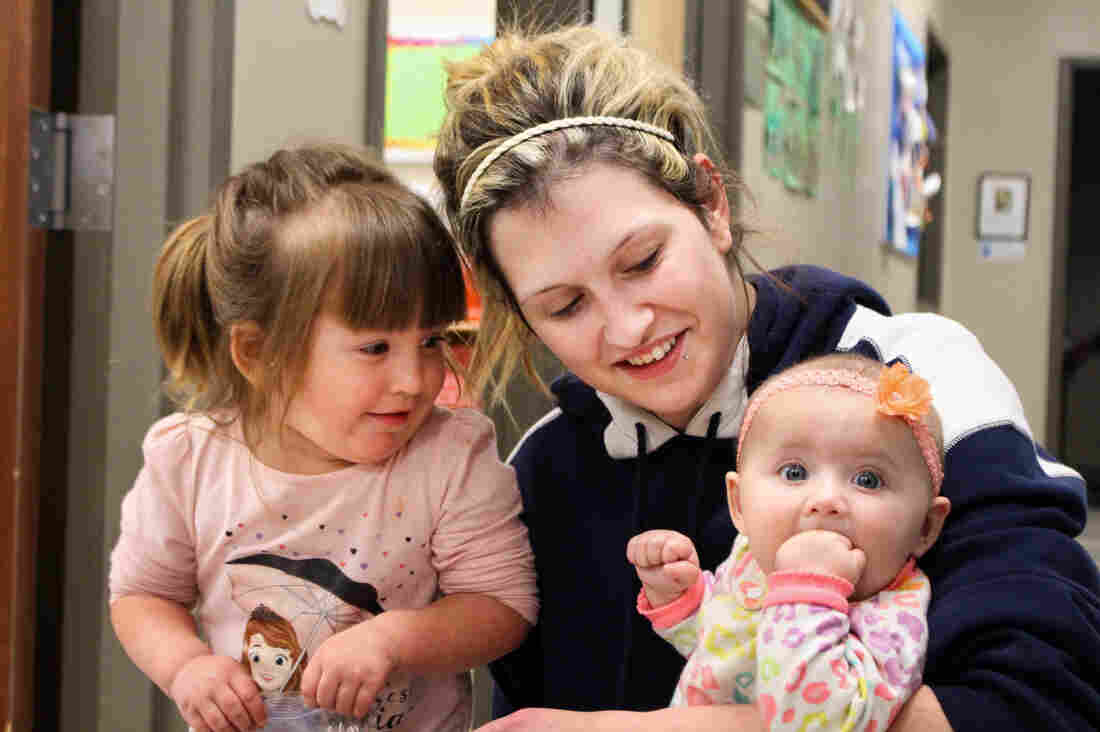 “I’m not just a drug addict,” says Amanda Williamee. Her desire to be a great mom to daughters Taycee (left) and Jayde (right) has motivated her to get into treatment, and pick up the psychological tools she’ll need to stay clean. Sarah Jane Tribble/KHN hide caption 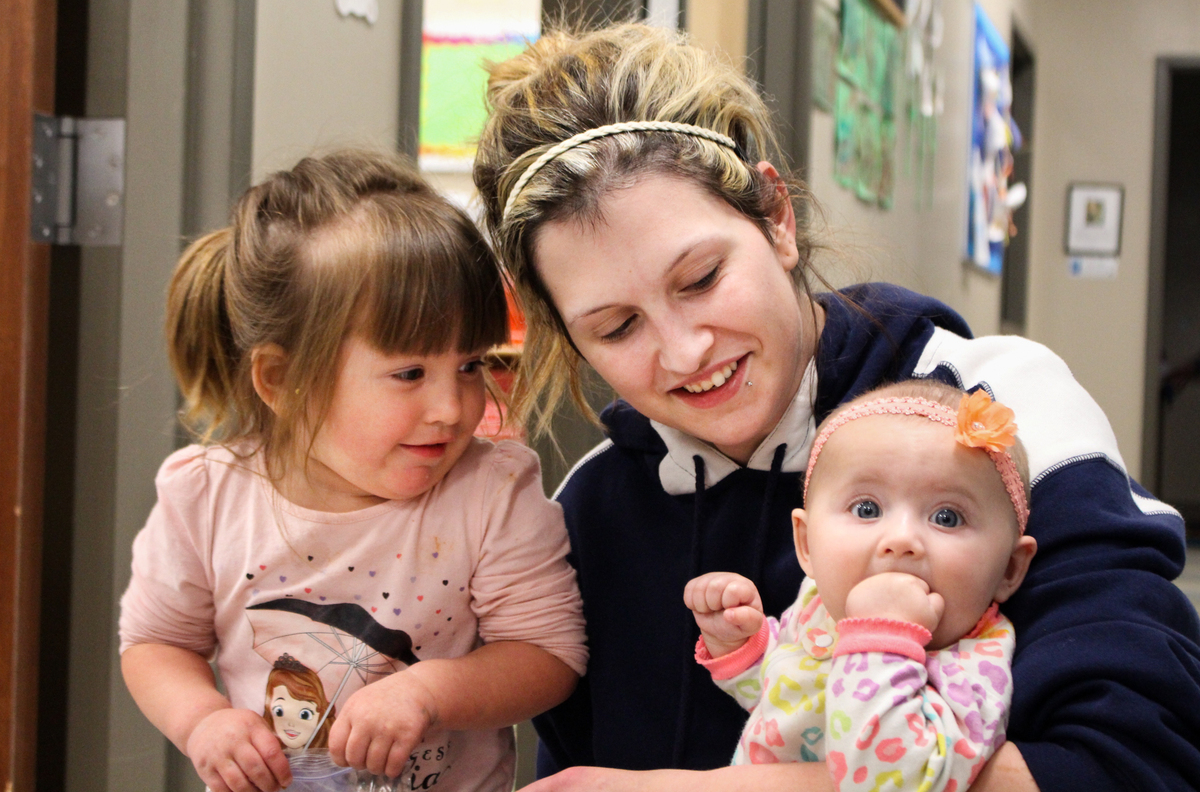 “I’m not just a drug addict,” says Amanda Williamee. Her desire to be a great mom to daughters Taycee (left) and Jayde (right) has motivated her to get into treatment, and pick up the psychological tools she’ll need to stay clean.

“It’s going to work,” she says. “It is. I’ve got a lot of tools to take with me and use in my life to stay clean, instead of using drugs to cover up my feelings and take their place, when something’s hard.”

Another motivator: The local child protective services agency has threatened to take Taycee and Jayde away this time, if Williamee doesn’t stay clean. The little girls are napping in the next room as Willammee talks.

“I’m not just some drug addict,” she says. “I’m a mother of two kids. And I feel like I’m a great mother. I have educational goals I plan to accomplish, and I plan on being a productive human being in our society.”

Williammee is now working hard to finish up 18 months of college classes so she can graduate. She wants to become a teacher.

Kaiser Health News , a nonprofit news service covering health issues, is an editorially independent program of the Kaiser Family Foundation, and not affiliated with Kaiser Permanente.