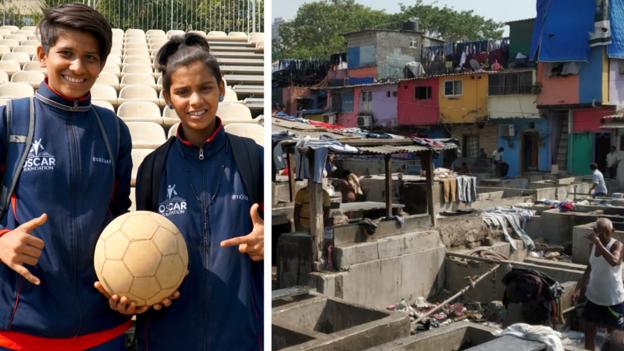 In the cramped and colourful streets of Colaba’s Ambedkar Nagar, a slum community in the south of India’s biggest city, the Women’s World Cup seems a long way away.

This summer’s tournament in France is likely to be watched by a global television audience of around 750 million but here – in the heart of the Mumbai’s military and business districts – even being able to kick a ball around has been far from guaranteed. Especially if you’re a girl.

Social conventions and tradition – “football’s not for girls, you have to do housework” – are limiting. As are the practicalities, with drinking water and sanitation unreliable.

But despite this unlikely backdrop in a country which has yet to feature at a World Cup, there are signs of a footballing future.

Mamta Prajapati, a 15-year-old defender, and Atisha Saini, an 18-year-old attacker, are two young women who are defying tradition to follow their football dreams.

Having grown up as neighbours, they now play side by side with other girls from their neighbourhood. Next season they will compete in the national and professional Women’s I-League. It will be a landmark step for both, having faced years of opposition to the very idea of playing – from their families, classmates, teachers and communities.

“They used to tell me ‘you’re a girl – don’t play, don’t go outside and don’t wear shorts,'” Saini says.

“And then they would say to my family ‘don’t allow your girl to go outside. We also have a girl, but she’s at home doing housework, so don’t go giving her ideas.'”

In a tight-knit community passionate about its traditions and family values, and in a city as competitive and cut-throat as Mumbai, a young girl pursuing a career as any professional athlete is rare, let alone training to become a footballer.

“When I started to play, my parents supported me for a year or two, but then after that they stopped,” says Prajapati.

“They told me that because I’m a girl, and because I’m now growing, I couldn’t continue to play football, and that I had to help with the housework.

“I would come home from school and then help my mother in the family shop for seven or eight hours most days, as well as finding time to study after. It was hard to find time to play.”

‘People park their bikes where we used to play football’

Space comes at a premium in Ambedkar Nagar, with 24,000 people living in a handful of tangled and intertwining streets. Thousands of tiny rooms and shelters house six or seven people each in a vibrant maze, with shared washrooms a fair walk away, and only a sporadic, unsanitary water supply in the communal taps.

Initially built as housing for the workers of a skyscraper construction site, and now home to the famous open-air Dhobi Ghat laundrette, the community has grown over the years to bursting point, presenting obvious problems for young footballers in search of a pitch.

“We don’t have much space for playing outside,” Saini says. “We used to play against the wall, in a spot around the corner from our house, but now people park their bikes there instead, so we have to go elsewhere.

“Often I juggle the ball in the house, and watch YouTube to try to learn new skills. But sometimes I break glasses or other things, so my mum is often shouting at me to stop.”

It is not uncommon to hear a story of football being bumped down the priority list in India. Despite recent signs of a resurgence, for decades it has lived in the shadow of other sports (most notably cricket), not to mention a whole host of educational, familial and career priorities.

‘Your girl is very good at football’

For young women here, opportunities for education, leisure and leadership are few and far between.

But Prajapati and Saini’s footballing dreams live on thanks to the Oscar Foundation, an organisation founded in the same Ambedkar Nagar neighbourhood where the girls live.

Football is used to provide “education with a kick”, and from humble beginnings 10 years ago (a makeshift pitch, outdoor classroom and not even a football), it has supported nearly 4,000 children across India.

One of Oscar’s biggest successes is achieving (almost) a 50-50 split of boys and girls engaged in its initiatives. They have a “no school, no football” policy, giving the children extra incentive to engage with their studying.

“When I was told I couldn’t play any more, I was crying,” Prajapati recalls. “But all of my team-mates and Oscar family supported me, and they came and spoke with my parents.

“They were saying ‘your girl is very good at football’; they talked about the coaching and education, and about how it’s different now for girls in our community.”

Saini’s experiences were similar, with Oscar’s work helping to change not just her family’s view, but the perspective of the whole community.

“Oscar came and spoke to my mother and father, and helped them to realise what I could achieve and where football could take me,” she says.

“Before Oscar I was not allowed out in my community, and they would demotivate us. But now we go outside and play matches, and go on tour, and the community is thinking, ‘girls can do anything’.”

On a recent tour to the UK (aptly named ‘Kick Like a Girl’), the visitors won all but one of their games against school teams from across Britain.

Prajapati spoke of the inspirational effect the tour had on both the girls and their communities at home, with a stadium trip having a particularly inspirational impact on her.

“In London we got to visit the Queens Park Rangers ground, to see the pitch, the tunnel and the changing rooms,” she says. “It made me feel like a professional player, and made me imagine what it could be like to play for a club or my country one day.”

A bright future for India’s next generation

Despite their successful defiance of social conventions so far, the promised land for young Indian footballers remains a long way off.

Having never qualified for a Women’s World Cup, and with their world ranking slipping back to 62, there is still a lot of work to be done before they can claim their place as one of the 24 nations to make it to the biggest stage.

However, with the infrastructure and promotion of the women’s game at an all-time high in India, and with the sport’s profile rising around the country, things are looking up for the next generation.

As two women pursuing football careers despite coming from such a challenging background, Prajapati and Saini recognise their own place as role models within their community.

Their message is clear. “Sometimes it’s OK not to listen to your communities or your families when they criticise,” says Prajapati.

“If you want to achieve your dreams you have to learn to ignore it, and to do it for yourself.”